By Simon Jones and Jonathan Spencer For Mailonline

Steve Bruce has confirmed Andy Carroll has left Newcastle after his contract ended.

Carroll returned to Newcastle for a second stint in the summer of 2019 from West Ham but he struggled to make an impact in the first-team, scoring just once from 37 matches.

Carroll, who played nine times for England, saw his deal expire at the end of the 2020-21 season and his No 7 shirt was recently handed over to Joelinton.

And Bruce has now confirmed that Carroll’s time at St James’ Park has come to an end – claiming the 32-year-old, who has been hindered by injuries – needs regular game time.

‘I think Andy thinks it’s time that he goes and plays,’ Bruce said to Sky Sports when quizzed about his future following the 1-0 friendly loss to York on Sunday.

‘I wish him the best of luck with it, he’s done well for me but I think he’s got it in his mind that he wants to go and play somewhere and enjoy his last few years.’

During his two stints at Newcastle, his first coming between 2006 and 2011 before he was snapped up by Liverpool after impressing up top, Carroll scored 34 times and created 26 assists in 134 matches.

Meanwhile, Newcastle defender Florian Lejeune is in talks with Alaves while they are among the clubs asking to take Manchester United centre back Axel Tuanzebe on loan. 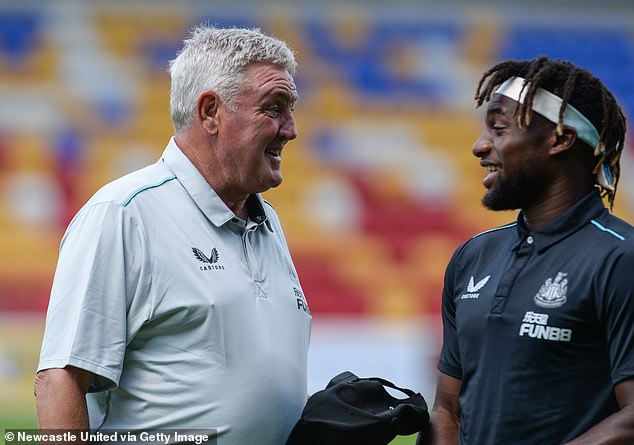