Newcastle man falls as he climbs up a huge historic yacht

A wannabe pirate has narrowly escaped death after falling from height as he climbed the mast of an historic yacht in Newcastle harbour.

As the 20-year-old initially scaled his way up the mast to a height of about 10 metres, he wowed the which had gathered on the jetty below on Sunday afternoon.

But their amazement soon turned to horror as he attempted to make a quick descent down the ropes, only to lose his grip and fall several metres, Nine News reports. 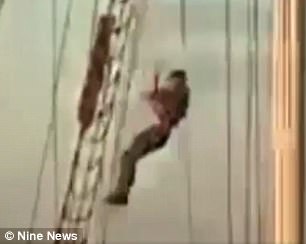 A wannabe pirate has narrowly escaped death after falling (right) from height as he climbed the mast of an historic yacht docked in the harbour at Newcastle, on the NSW Central Coast

Shocking footage caught the moment the man fell from the ropes, before his feet hit an object mid-air and he is flipped onto his back.

The crowd sitting near yacht at Queen’s Wharf, in the central coast New South Wales town, gasped and let out screams of horror as the man fell through the air.

But incredibly, despite the height from which he fell, the man reportedly escaped the incident without injury.

Paramedics rushed him to John Hunter Hospital but released him on Monday without even as much as a broken bone. 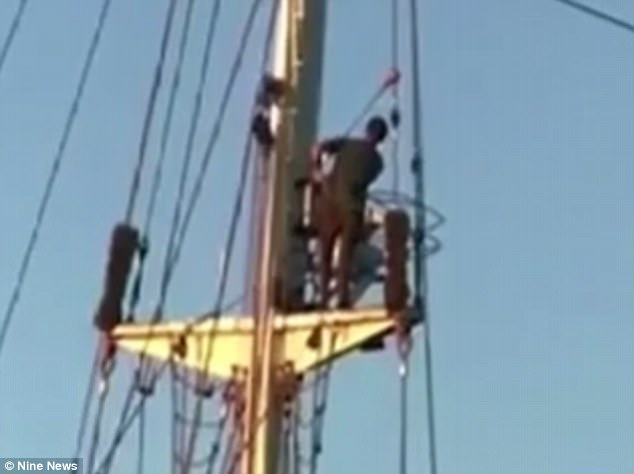 Incredibly, despite the height from which he fell, the man  (pictured) reportedly escaped the incident without injury