Neymar is prepared to end speculation over his future and commit to Paris Saint-Germain, but any chance of a deal will depend on how far the team progresses in the Champions League this season.

Despite constant speculation about the Brazilian’s desire to return to Barcelona, PSG are now optimistic about their chances of tying him down to a longer contract.

But a decision will not be taken before April or May and there is no deal currently on the table.

According to ESPN, the forward is prepared to stay in France but only if the Ligue 1 champions can change their fortunes in Europe.

The world record £198million deal to bring Neymar to Paris in 2017 was part of the French giants’ ambition of winning the Champions League for the first time in their history.

But so far the move has failed to bring about European glory, with PSG crashing out in the Round of 16 on both occasions.

This season, they eased through the Group Stage, finishing above Real Madrid, but face a tricky tie against Dortmund in the next round.

It is now understood the relationship between Neymar and PSG, which has been fractious at the best of times, is on the mend.

The 27-year-old is now settled in Paris both on and off the pitch and feels at home in the club and the city, sources said. 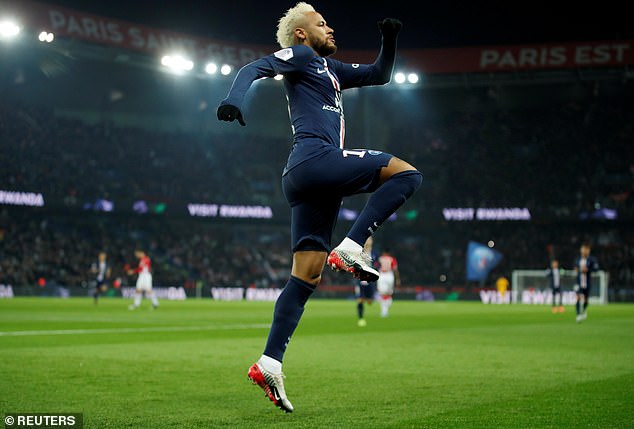 The forward, who has scored 11 goals in 12 league games this season, has been constantly linked with a move back to Barcelona

He still has two and a half years left on his contract and informal talks have opened between sporting director Leonardo and Neymar’s father.

The Brazilian reportedly came very close to reuniting with Lionel Messi and Luis Suarez last summer, and has previously spoken on record that his unhappiness at PSG warranted a move away.

Neymar returned late to pre-season training after trying to engineer the move which failed to come to fruition and then he sat out the early weeks of the season with a foot injury.

He was even booed by fans who believe he has no desire to stay in France and doesn’t deserve his eye-watering salary.

But his performances have remained strong, scoring 11 in 12 league games this season and notching up five assists.