Shanahan revealed his young star will have surgery tomorrow with his season now over, according to the 49ers.

The 22-year-old was taken from the field in a cart following a big hit during the first quarter of their NFC West clash vs. the Seahawks.

Lance, who who was named the starter during training camp, momentarily laid on the turf before he was helped off the field.

Later, his right leg was put in an air cast as he was carted off the field, with both teammates and opponents alike, walking over to show their support. Reports emerged he may have suffered an ankle fracture or dislocation.

Sophomore quarterback Trey Lance writhed on the turf in pain following a big hit vs. Seattle

Seattle linebacker Cody Barton hit Lance with ferocity on a second-and-eight just outside the red zone.

The 2021 third overall pick, ran a zone-read play up the middle with 2:33 remaining in the opening quarter.

He was met at the 19-yard line by Barton and Bryan Mone who hit the former North Dakota State man solidly. 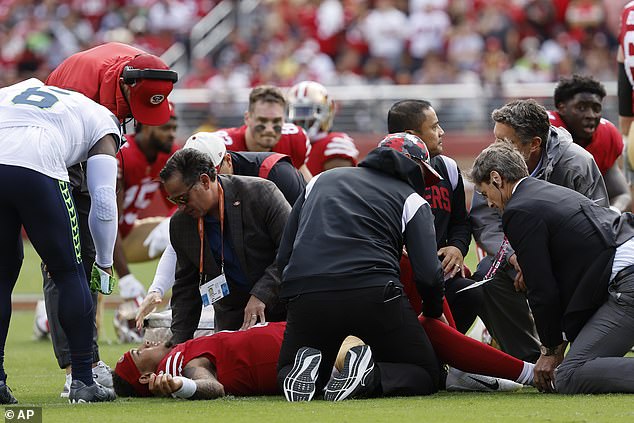 Lance had to be carted from the field in just his fourth career start, and second of ’22 season

Jimmy Garoppolo, who was the starter from 2017-2021 seasons, returned to his favored position and led the 49ers to a touchdown on his second drive.

Garoppolo connected with Ross Dwelley for a 38-yard touchdown with 11 minutes remaining before the half.

San Francisco are currently in control against a Seattle team who had hoped to ride the momentum of Monday’s night shock win over Denver. 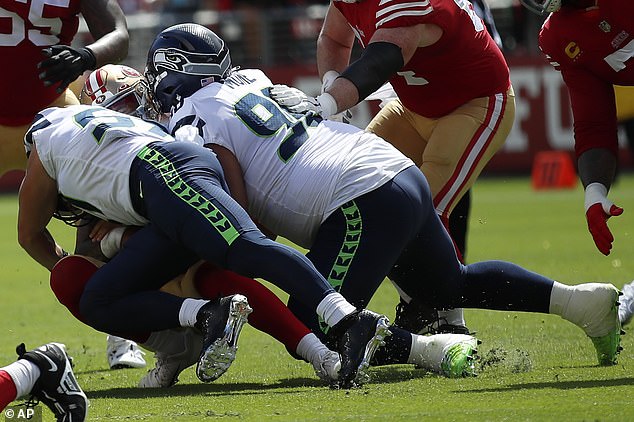 The 49ers led 3-0 when Lance left the game before Garoppolo helped enhance their lead beyond two scores.

Lance finished the game 2-of-3 for 30 yards, with thee carries for 13 rushing yards.

Meanwhile, Garoppolo finished the first-half 8-of-11 for 106 yards and a touchdown. 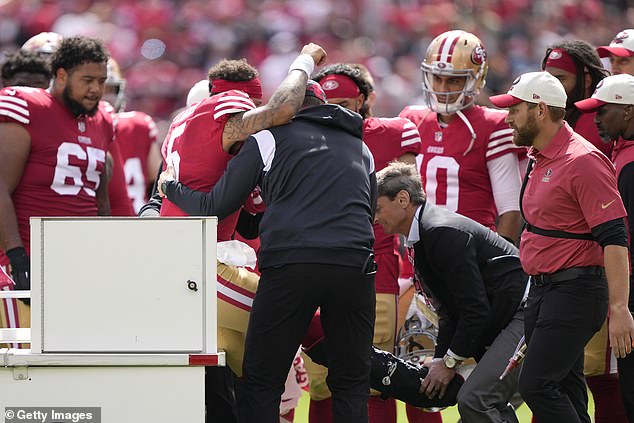 Lance was comforted by teammates, including Jimmy Garoppolo, after the right leg injury