NFL commissioner Roger Goodell has been a target of criticism for Donald Trump, but the son of former republican senator Charles Goodell did have kind words for the President once the new North American trade deal addressed a Canadian rule that limited the value of the Super Bowl rights in the country

Although he has been a persistent target of criticism for Donald Trump, NFL commissioner Roger Goodell is praising the President’s ‘leadership and determination’ for an aspect of the new U.S.-Mexico-Canada Agreement that should prove profitable for the embattled league.

The new North American trade deal, which replaced the North American Free Trade Agreement, still needs congressional approval, but under the pact, the NFL could earn more from Super Bowl broadcasting rights in Canada. (CTV broadcasts the Super Bowl in Canada, but gets its game feed from the American broadcast)

Currently the NFL is hampered by a 2015 ruling in Canada stipulating that the Super Bowl – and no other programs – must show American advertisements rather than Canadians. The updated USMCA would do away with that stipulation, conceivably allowing the NFL customize advertisements for its Canadian audience.

‘We greatly appreciate President Trump’s leadership and determination in bringing about a resolution to our intellectual property issue in Canada,’ Goodell said in a statement. 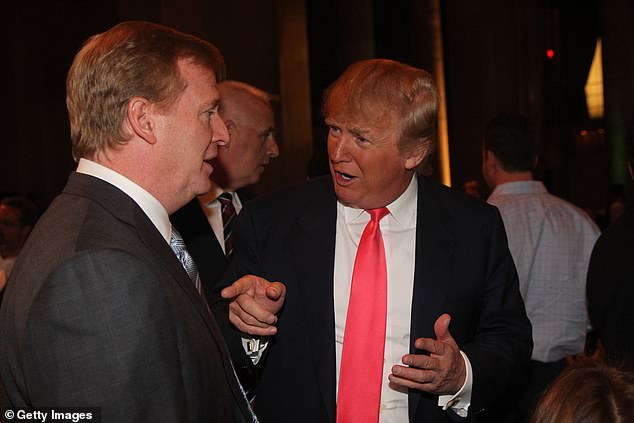 Goodell (left) has become criticized by Trump since September of 2017 for his refusal to punish players for protesting inequality and racist police brutality by sitting or kneeling during the anthem. Trump previously made several failed attempts to buy an NFL team

Since September of 2017, Trump has criticized the NFL and Goodell for its refusal to punish players for protesting inequality and racist police brutality by sitting or kneeling during the national anthem.

Besides calling the protesting players ‘sons of b******,’ Trump has also targeted Goodell, referring to the Commissioner’s reported salary.

Even before becoming a politician, Trump had a contentious relationship with the league because of several failed attempts to purchase NFL franchises – first in 1981 with the Baltimore Colts and most recently with the Buffalo Bills in 2014.

Trump reportedly had an offer to buy the team for $50 million in 1984, when the Cowboys were struggling, but thought better of it.

As he told The New York Times, ‘I feel sorry for the poor guy who is going to buy the Dallas Cowboys. It’s a no-win situation for him, because if he wins, well, so what, they’ve won through the year, and if he loses, which seems likely because they’re having troubles, he’ll be known to the world as a loser.’

Jerry Jones ultimately purchased the hapless Cowboys in 1989 for a mere $140 million dollars and immediately began the process of returning the franchise to its glory years of the 1970s. The team won three Super Bowls in the 1990s and is now the most valuable sports franchise in the world at $5 billion, according to Forbes.

According to New York Times best-selling author Jeff Pearlman, Trump had a drastically different position on anthem etiquette during his brief tenure as a team owner in the now-defunct United States Football League.

To Trump, who owned the New Jersey Generals from 1984 until the USFL folded in 1986, the national anthem was a good time to get a little work done, and not necessarily while standing.

‘I’m sure sometimes Trump stood and sometimes he didn’t stand, but it’s just funny that he’s calling out all these guys for kneeling during the anthem when it was well known – and not even a big deal – that Donald Trump would sit during the anthems,’ Pearlman told the Daily Mail.

‘[He would] do work, take calls, conduct interviews,’ Pearlman continued. ‘Probably never gave it a second thought.’ (This claim echoes that of the Philadelphia Daily News’s Paul Domowitch, who Tweeted in May that he once saw Trump spend ‘the entire anthem berating’ the president of the USFL’s Philadelphia Stars.)

The White House has not responded to a request for comment.

The NFL’s ratings have declined over the last two seasons, since the protests began in 2016, league teams split a record $8.1 billion last season.

In July, ESPN reported the earnings after the Green Bay Packers, a public company, disclosed its financial information for 2017, revealing the franchise had received $255 million in revenue sharing.

That means 32 teams split around $8.1 billion, and that figure does not represent the league’s entire revenue, which was estimated at $14 billion for 2017 – the most of any professional sports league, according to Bloomberg. Per league rules, the NFL shares just over half of its revenue among all teams.

The NFL was a tax-exempt non-profit until 2015, when it changed its status with the IRS.

The money primarily came from revenue from the league’s television packages, according to ESPN. That is an increase of 4.9 percent, due in part to the rising value of the NFL Thursday Night Football franchise.