Buoniconti was bypassed in the NFL draft but went on to a 14-year career. He helped the Dolphins win back-to-back Super Bowls, including the 1972 team that finished 17-0

Pro Football Hall of Fame middle linebacker Nick Buoniconti, an undersized overachiever who helped lead the Miami Dolphins to the NFL’s only perfect season, has died at the age of 78.

Bruce Bobbins, a spokesman for the Buoniconti family, said he died Tuesday in Bridgehampton, New York. A cause of death was not immediately known.

In recent years Buoniconti struggled with symptoms of chronic traumatic encephalopathy (CTE), a degenerative brain disease associated with repeated blows to the head. He was diagnosed with dementia in 2016.

In 2017, Buoniconti said he wouldn’t have played football if he had known about the risks it posed to his brain health. At the time he estimated that he took 520,000 hits to the head during the 14 years he played professionally.

In retirement, Buoniconti became critical of the NFL’s treatment of former players who were dealing from CTE symptoms.

‘We’re the players who built the game, but have been forgotten,’ he told Sports Illustrated in 2017.

He also called the NFL’s $1 billion concussion settlement with former players ‘a joke,’ because he felt the agreement failed to provide help for suffering players.

‘They are waiting for us to die,’ he said of the NFL.

Buoniconti was bypassed in the NFL draft but went on to a decorated career. He helped the Dolphins win back-to-back Super Bowls, including the 1972 team that finished 17-0.

Following retirement, Buoniconti and his son, Marc, worked to raise more than a half-billion dollars in the search for a cure for paralysis. The younger Buoniconti was paralyzed from the shoulders down after making a tackle for The Citadel in 1985. 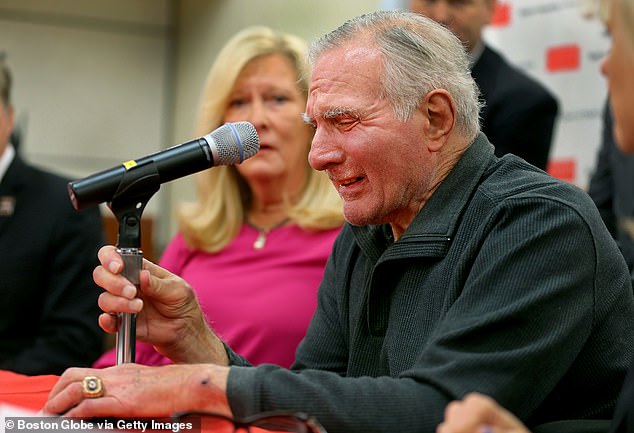 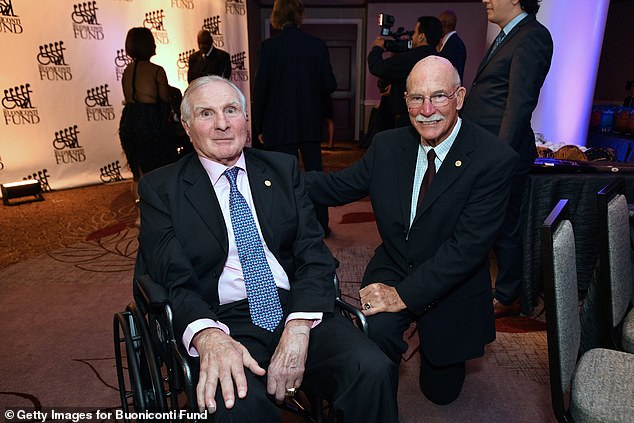 Marc Buoniconti said his father was his biggest hero.

In 1985, he and Marc Buoniconti helped to found the Miami Project to Cure Paralysis, which has become the world’s largest spinal cord injury research center.

Following retirement, Buoniconti worked as an attorney, as president of U.S. Tobacco and as an agent to such athletes as Bucky Dent and Andre Dawson.

A native of Springfield, Massachusetts, Buoniconti played guard on offense and linebacker on defense for Notre Dame. But at 5-11 and 220 pounds, he was small for an NFL linebacker.

He was taken in the 13th round by the Boston Patriots of the upstart AFL and played for them from 1962 to 1968. He made the AFL All-Star Game six times and had 24 career interceptions for the Patriots, including three in a single game in 1968. 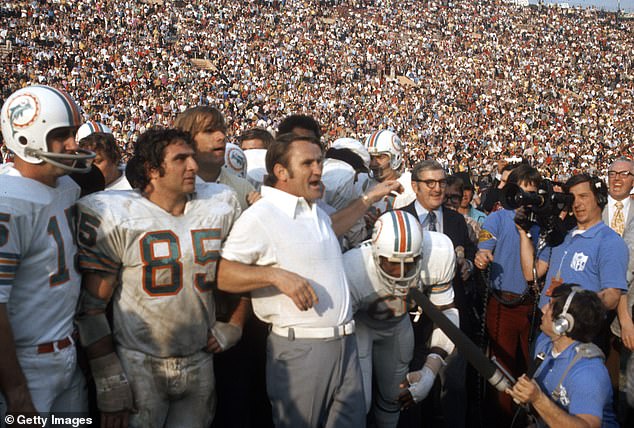 Buoniconti (No. 85) and Dolphins coach Don Shula (in white) celebrate the NFL’s only perfect season after beating the Washington Redskins in Super Bowl VII to finish 17-0 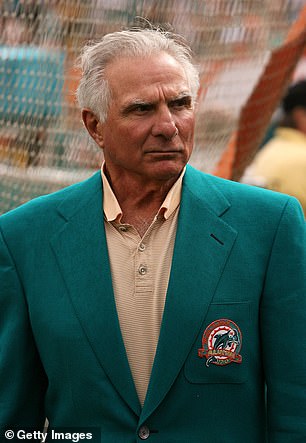 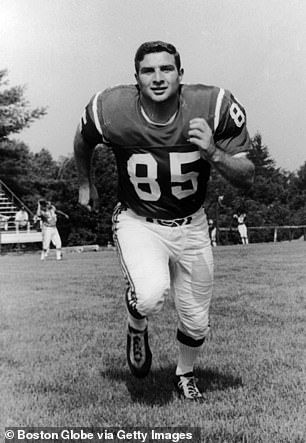 He was taken in the 13th round by the Boston Patriots of the upstart AFL and played for them from 1962 to 1968 (right). He made the AFL All-Star Game six times and had 24 career interceptions for the Patriots, including three in a single game in 1968 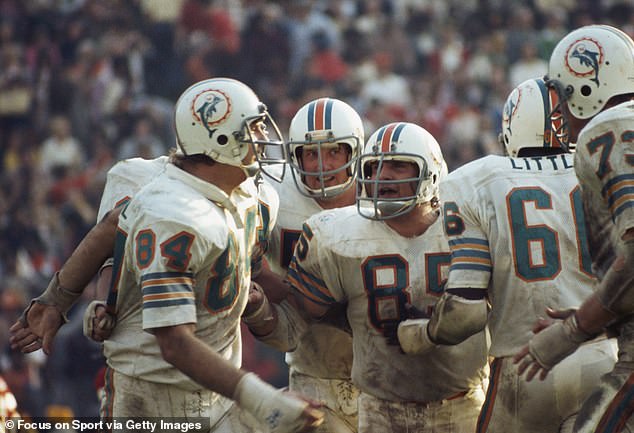 In 2017 he pledged to donate his brain to the Boston University CTE Center.

Buoniconti had become very critical of the NFL’s handling of head injuries in recent years. Specifically he criticized the league’s $1 billion concussion settlement, which he felt was impractical because it did not effectively address CTE, which can only be diagnosed posthumously.

‘Everybody’s searching,’ Buoniconti told SI. ‘Some go to North Carolina, some to [Boston University], some to UCLA. And it’s all related. That’s why it’s so unnecessary, what the NFL is putting the players through by making us document the neurological deficiencies.

‘Not everybody can afford to go through that. And they say they’ll pay for it—but do you know what that’s like, actually the money?’

Buoniconti had been healthy in retirement until recent years.

He was particularly critical of the NFL’s decision to withhold research grants from Boston University after previously promising to fund the school’s CTE studies.

‘The fact that the N.F.L. pulled its funding from Ann McKee’s research prompted me to come up here and make a statement that the N.F.L. is only in it for the money, and they don’t care about the guys who preceded me,’ Buoniconti told The New York Times in 2017. ‘I’m really angry because they turned their backs on us and it’s not a responsible way to do things.’

As athletes of all sports speak out about their brain injury fears, we run through the need-to-know facts about risks, symptoms, tests and research.

1. Concussion is a red herring: Big hits are not the problem, ALL head hits cause damage

All sports insist they are doing more to prevent concussions in athletes to protect their brain health.

However, Boston University (the leading center on this topic) published a groundbreaking study in January to demolish the obsession with concussions.

Concussions, they found, are the red herring: it is not a ‘big hit’ that triggers the beginning of a neurodegenerative brain disease. Nor does a ‘big hit’ makes it more likely.

In fact, it is the experience of repeated subconcussive hits over time that increases the likelihood of brain disease.

In a nutshell: any tackle or header in a game – or even in practice – increases the risk of a player developing a brain disease.

2. What is the feared disease CTE?

Head hits can cause various brain injuries, including ALS (the disease Stephen Hawking had), Parkinson’s, and dementia.

But CTE is one that seems to be particularly associated with blows to the head (while the others occur commonly in non-athletes).

CTE (chronic traumatic encephalopathy) is a degenerative brain disease that is caused by repeated hits to the head.

It is very similar to Alzheimer’s in the way that it starts with inflammation and a build-up of tau proteins in the brain.

These clumps of tau protein built up in the frontal lobe, which controls emotional expression and judgment (similar to dementia).

This interrupts normal functioning and blood flow in the brain, disrupting and killing nerve cells.

Gradually, these proteins multiply and spread, slowly killing other cells in the brain. Over time, this process starts to trigger symptoms in the sufferer, including confusion, depression and dementia.

By the later stages (there are four stages of pathology), the tau deposits expand from the frontal lobe (at the top) to the temporal lobe (on the sides). This affects the amygdala and the hippocampus, which controls emotion and memory.

3. What are the symptoms?

Sufferers and their families have described them turning into ‘ghosts’.

4. Can sufferers be diagnosed during life?

No. While a person may suffer from clear CTE symptoms, the only way to diagnose their CTE is in a post-mortem examination.

More than 3,000 former athletes and military veterans have pledged to donate their brains to the Concussion Legacy Foundation for CTE research.

Meanwhile, there are various studies on current and former players to identify biomarkers that could detect CTE.