BREAKING: NFL is ‘investigating the Patriots for videotaping the Bengals’ sideline ahead of Sunday’s game in Cincinnati’ as New England coach Bill Billichick is embroiled in yet ANOTHER spy scandal

The New England Patriots and coach Bill Belichick are being investigated by the NFL to determine whether or not the team had someone recording the Bengal’s sideline during Sunday’s loss to the Cleveland Browns, Bengals coach Zac Taylor told reporters on Monday.

‘I’m aware that there was an incident,’ Taylor said Monday ahead of his team’s Week 15 game against the visiting Patriots. ‘I know the league is investigating it, so I’ve got no comment on it.’

Spokesmen for the NFL and Patriots did not immediately respond to the Daily Mail’s request for comment.

ESPN’s Dianna Russini reported that the Bengals have the original tape while the NFL has already obtained a copy for its investigation.

The accusation comes 12 years after Bill Belichick paid a $500,000 fine for spying on the Jets in what is now known as ‘Spygate’ 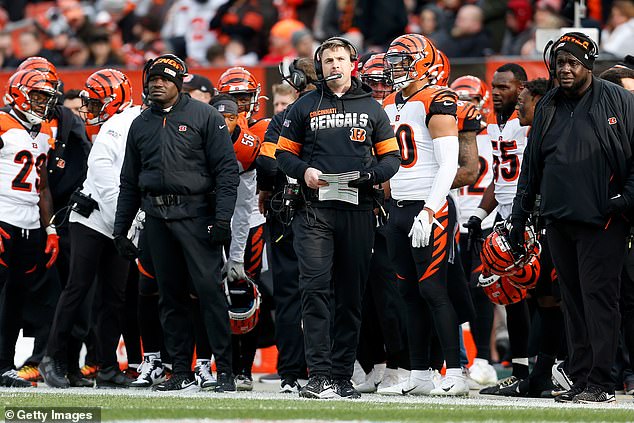 The New England Patriots are being investigated by the NFL to determine whether or not the team had someone recording the Bengal’s sideline during Sunday’s loss to the Cleveland Browns, Bengals coach Zac Taylor (center, facing camera) told reporters on Monday

According to multiple reports, the Patriots had an advance scout in Cleveland for Sunday’s Browns-Bengals game.

‘Just spoke to New England about the situation,’ Russini wrote on Twitter. ‘Apparently this was a very BIG misunderstanding and lack of communication with the Bengals.’

NESN’s Doug Kyed echoed Schefter’s reporting on Twitter: ‘A source tells me the Patriots had a camera crew in Cleveland this weekend to shoot a documentary on a scout that was watching the Bengals-Browns game. The Patriots cleared it with the Browns, have turned the footage over to the NFL and are cooperating fully with the league.’

As ESPN’s Adam Schefter wrote on Twitter, that scout was not filming, but rather, being filmed

As one fan joked, the Bengals, who are 1-12 on the year, are not accustomed to cameras

The accusation comes 12 years after New England was caught recording the New York Jets sideline from an unauthorized location during a game, leading to a $500,000 fine for Patriots coach Bill Belichick, a $250,00 fine for the team, and the loss of a first-round draft pick.

Officially, the Patriots were guilty of using ‘equipment to videotape an opposing team’s offensive or defensive signals,’ but while Belichick did admit to a ‘mistake’ in his interpretation of the rules, he has denied using the footage to gain an in-game advantage.

The Patriots were ordered to hand over all materials connected with the incident, after which the NFL announced that the materials had been destroyed. 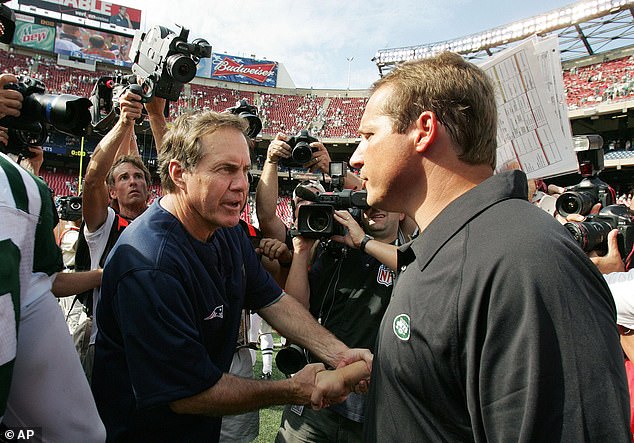 In 2007, Belichick shakes hands with his former assistant, then-Jets coach Eric Mangini. Later it was revealed that the New England Patriots were guilty of using ‘equipment to videotape an opposing team’s offensive or defensive signals’ during that September win over New York