The Houston Texans remained in the locker room during the Star-Spangled Banner and the reigning-champion Chiefs lined up for a singing of ‘the black national anthem’ on Thursday night as the NFL opened its season in Kansas City under dramatically different circumstances than any other campaign in league history.

Not only was the limited crowd of 17,000 fans asked to follow social distancing guidelines amid the coronavirus pandemic, but spectators were also prohibited from wearing Native American headdresses and war paint as the NFL attempts to combat racial injustice following the death of George Floyd in Minneapolis police custody on May 25.

With that in mind, Chiefs players lined up along the goal line about 30 minutes before kickoff Thursday night in a show of solidarity for social justice initiatives while a video played on the screens in each end zone of Arrowhead Stadium.

Along with the words ‘It Takes All of Us’ on the screens, the video showcased Alicia Keyes performing the song ‘Lift Every Voice and Sing.’ It was written as a poem by James Weldon Johnson, set to music by his brother, J. Rosamond Johnson, and is often referred to as the ‘Black national anthem.’ The song will be played before every Week 1 game this season as the NFL continues to address social injustice.

The Texans remained in their locker room during the national anthem in a coordinated display meant to bring awareness to Black Lives Matter and other social justice initiatives. The anthem was performed by R&B duo Chloe X Halle from an empty stadium and streamed on the video screens. As soon as it was over, the Texans and their coaching staff ran out of the tunnel in the corner of Arrowhead Stadium.

Meanwhile the Chiefs stood along their sideline during the anthem. Most of them had their hands over the hearts, although defensive end Alex Okafor knelt with one fist in the air.

Afterwards the two teams met at midfield to shake hands while messages such as ‘We believe Black lives matter’ and ‘It takes all of us’ played on the screen. They then lined up from end zone to end zone in a show of solidarity before the coin toss.

Many of the 17,000 fans in attendance could be heard booing during the pregame demonstrations. 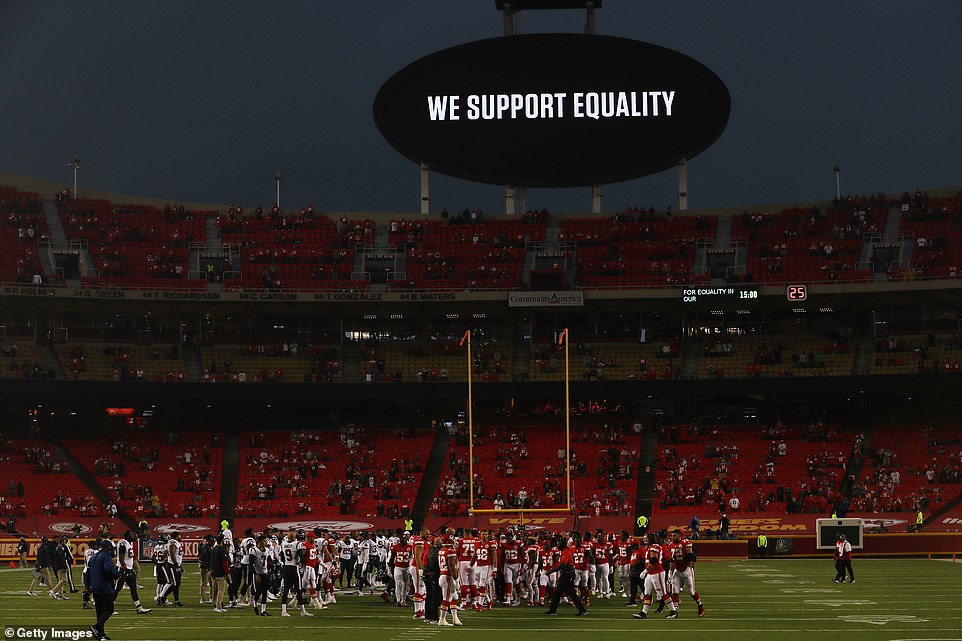 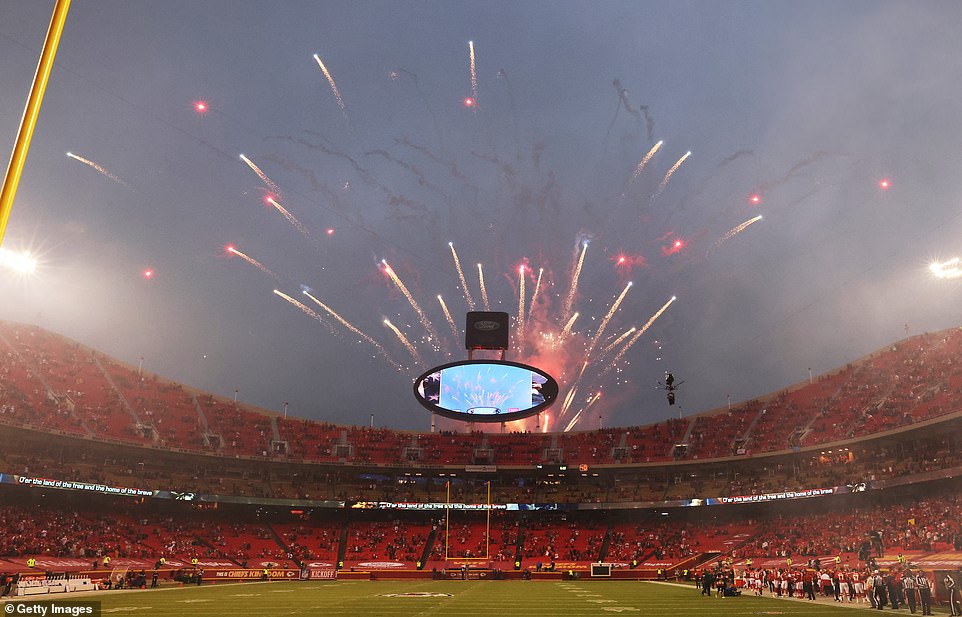 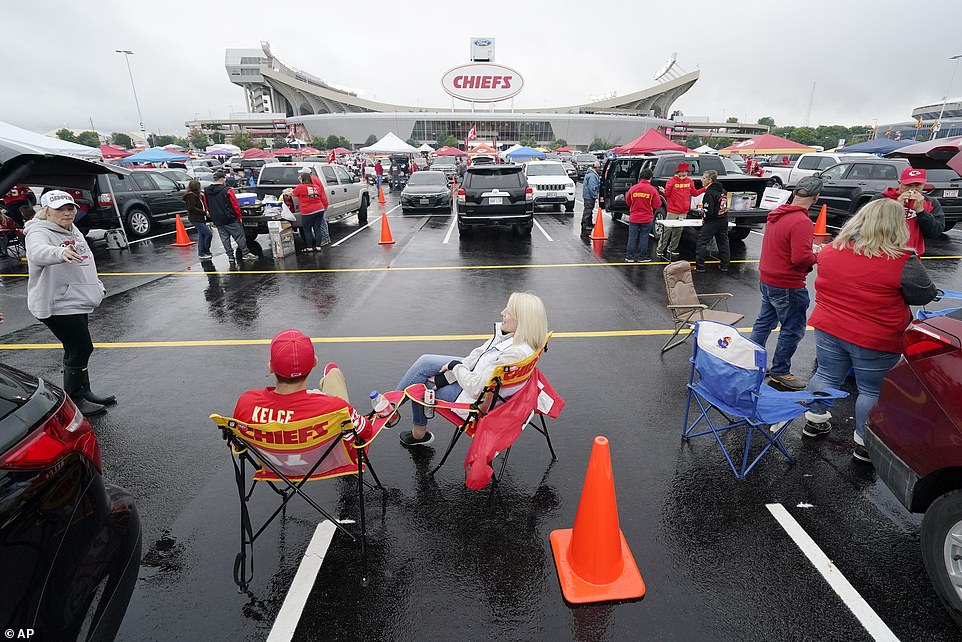 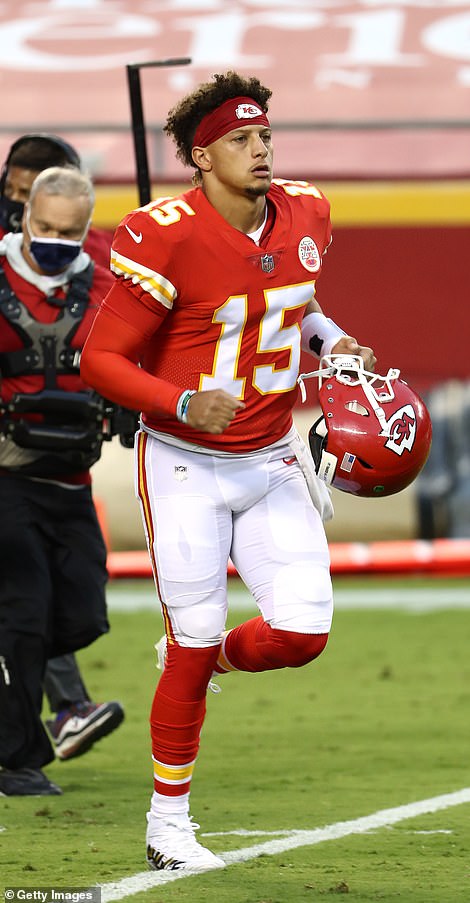 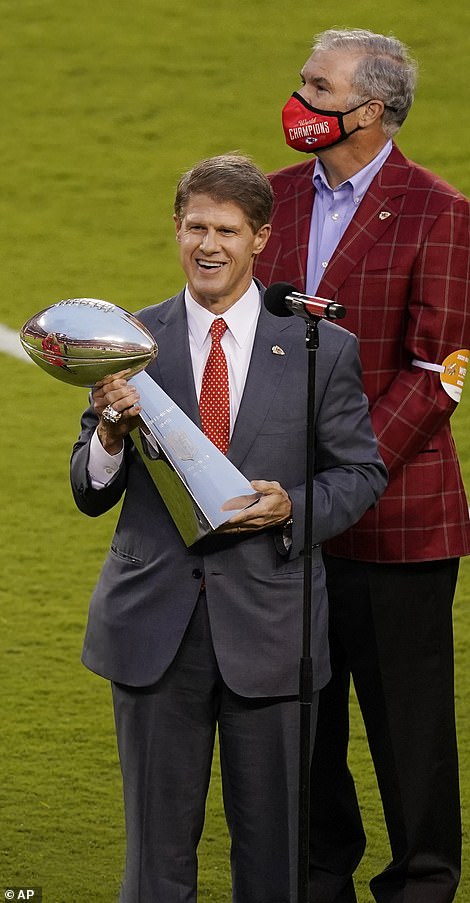 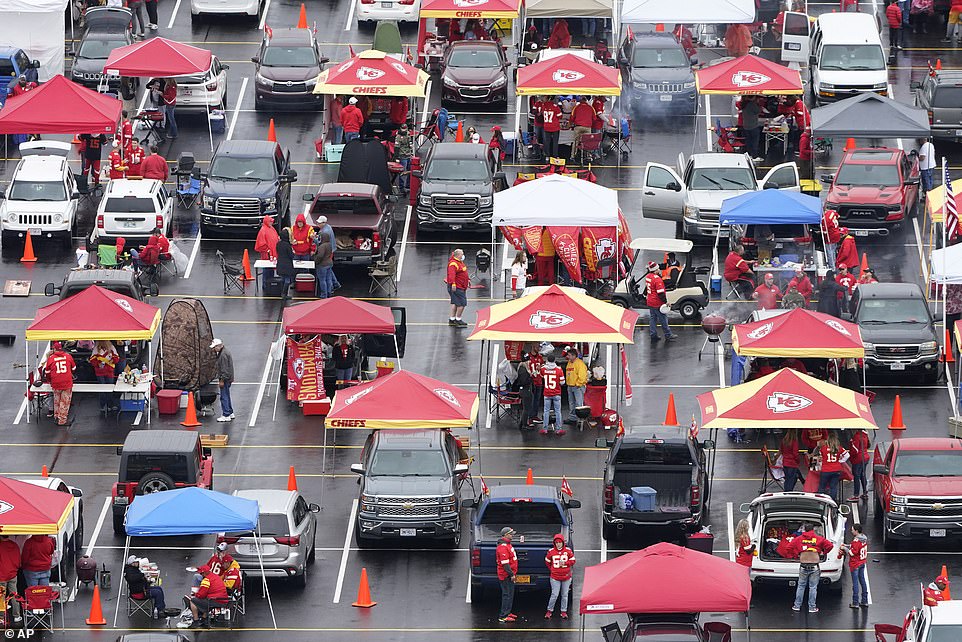 Even in the parking lot, the 17,000 fans in attendance were still expected to keep distant amid the ongoing pandemic 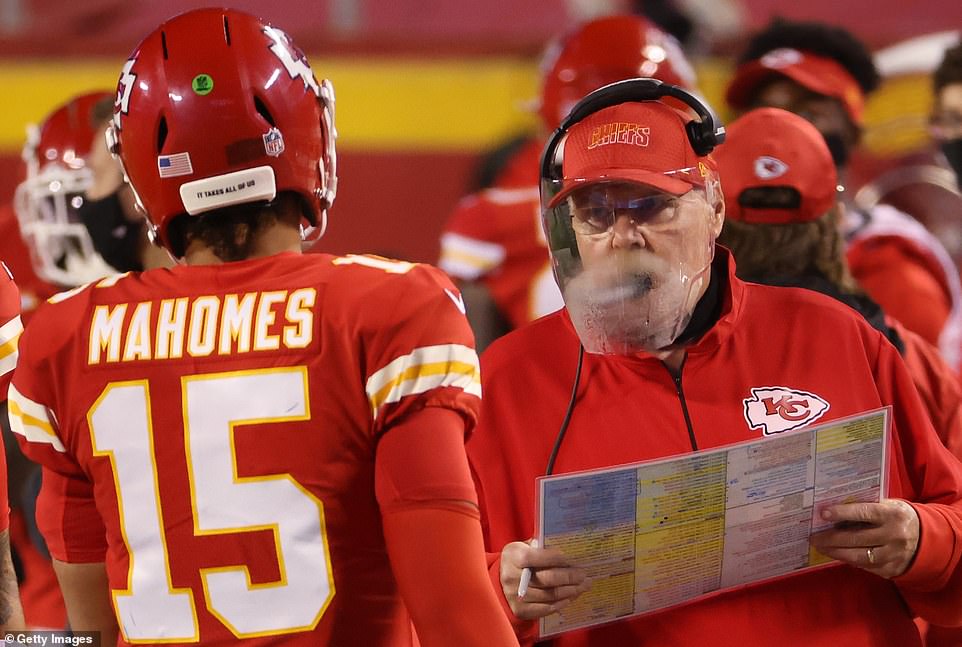 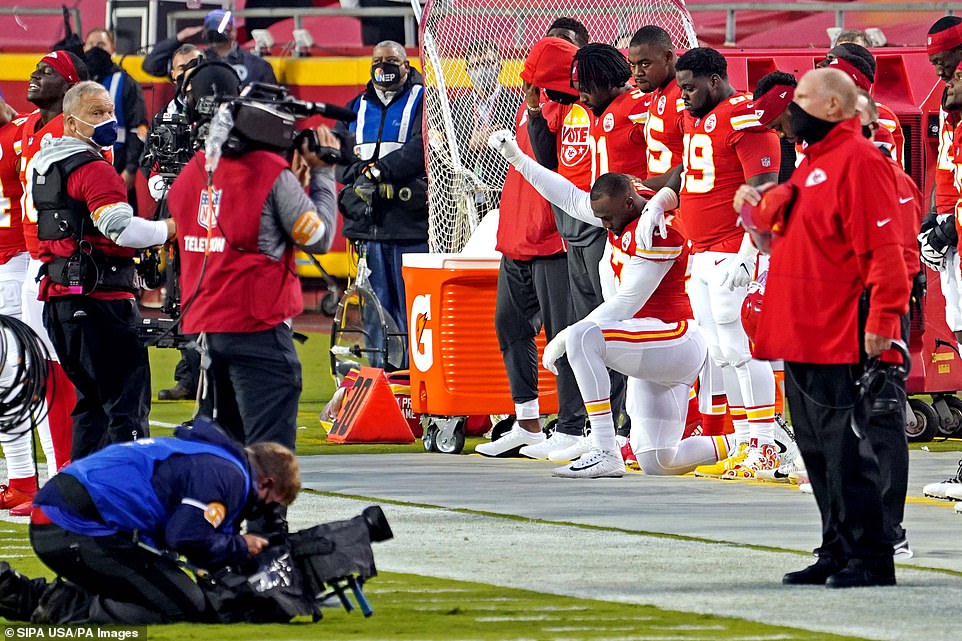 The Kansas City Chiefs stood along their sideline during the national anthem. Most of them had their hands over the hearts, although defensive end Alex Okafor (pictured) knelt with one fist in the air

The decision to ban headdresses and war paint has been received by Native Americans as a good first step, but it also frustrated some of the Chiefs’ longtime fans.

‘I think it’s a little overboard, but I mean, we’ve got to listen to the rules,’ said Kory Noe, who owns a car lot in Stafford, Missouri. ‘I’m a big fan of the tomahawk chop. It’s just been the Chiefs’ signature song since they started and it’s going to be hard not to do it if they take it away.’

In fact, the Chiefs are pushing a subtle change to the tomahawk chop celebration amid complaints that it’s racist. The plan is for cheerleaders to use a closed first instead of an open palm to signal the beating of a drum. The team typically has a celebrity or other guest of honor beat a large drum before the start of the game.

‘We’ve started to work and started some discussions about trying again to educate and make people aware of the sacred position of the drum in the American Indian culture, but also that it’s seen as sort of the heartbeat of that culture,’ Chiefs president Mark Donovan said ‘It’s easy to latch onto that, say, ‘OK, it’s kind of the heartbeat of the stadium too.”

The changes in Kansas City came after several professional franchises, including the Cleveland Indians in Major League Baseball, have been pushed to drop racist imagery. The biggest victory for supporters of Native Americans may have come before the start of the football season, when the Washington franchise dropped Redskins as its nickname.

‘I see where the problem is with having (a headdress) and doing the face paint and everything, because you’re not a part of their culture,’ said Jackson Allen, a 24-year-old sales rep from Springfield, Missouri. ‘It’s offensive. I can see the problem.’

The Chiefs have worked with tribes for the past six years to distance themselves from imagery that could be considered racist. Each season, a game is dedicated to Native American heritage. 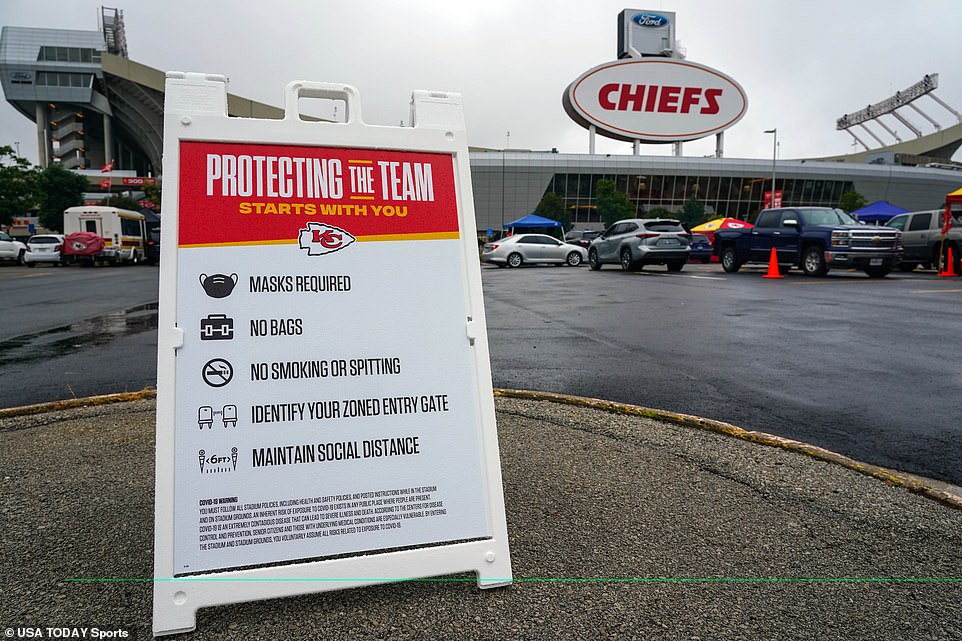 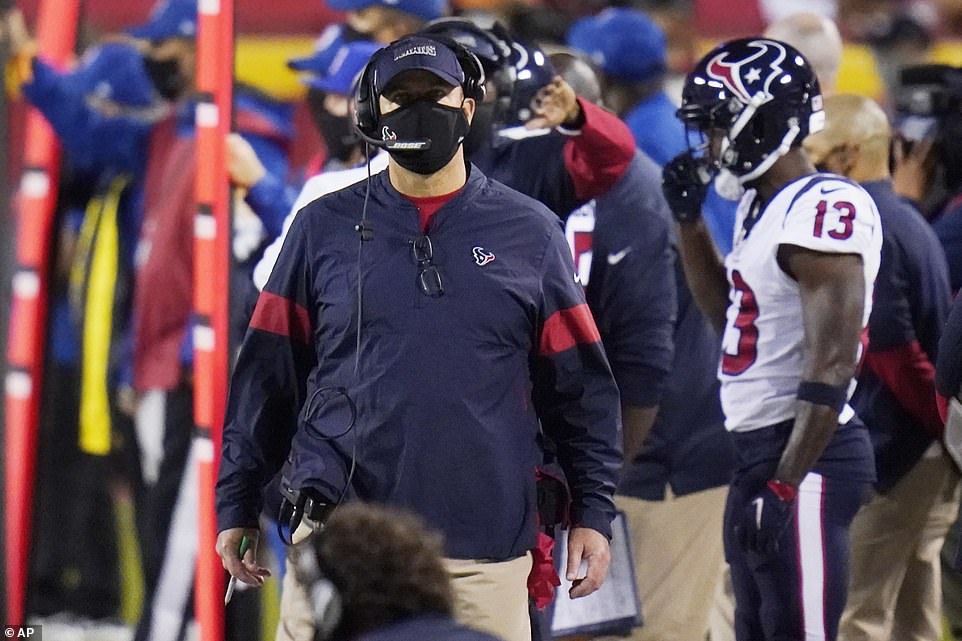 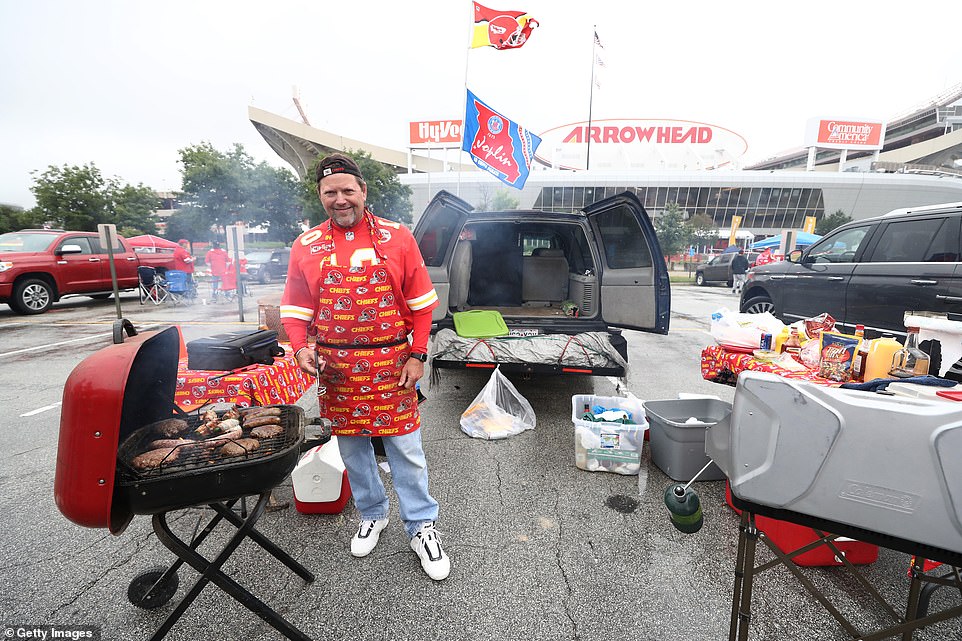 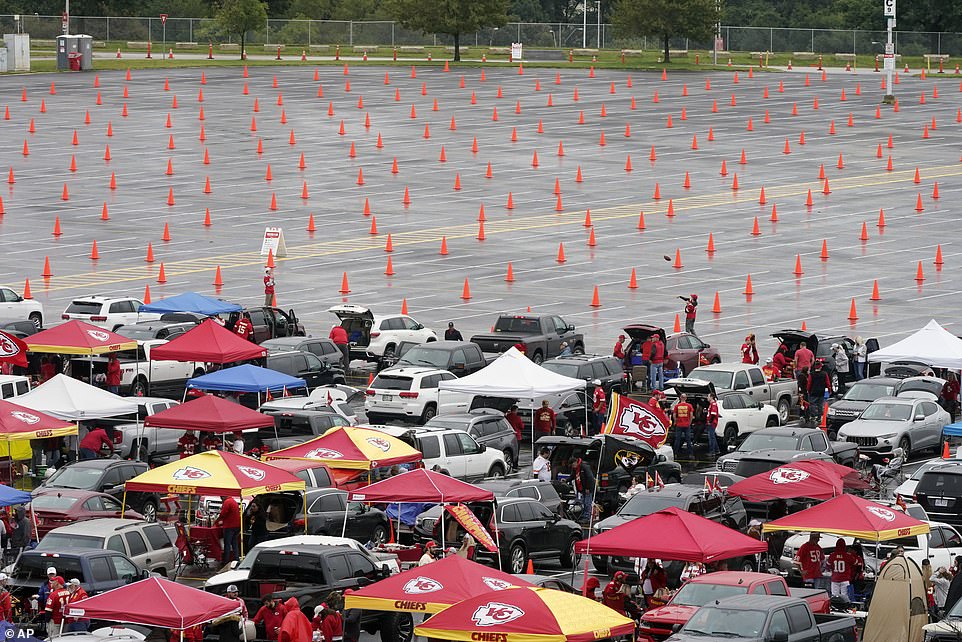 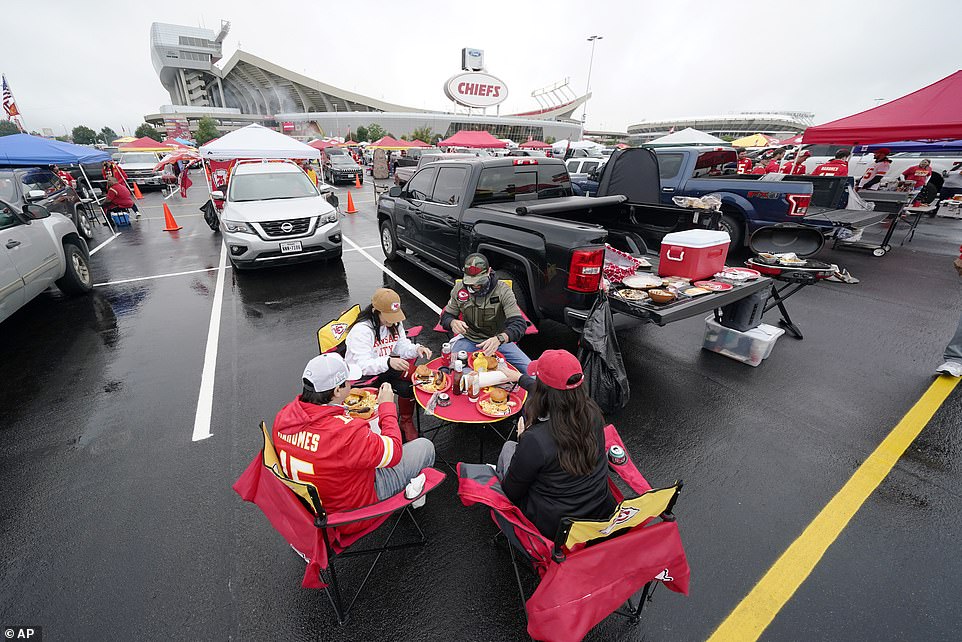 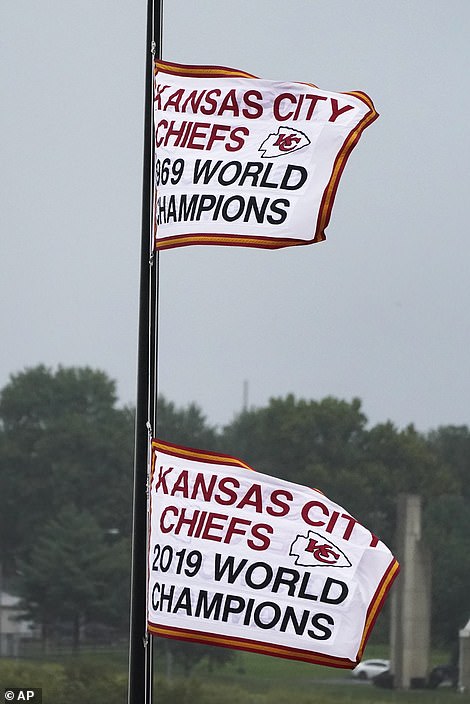 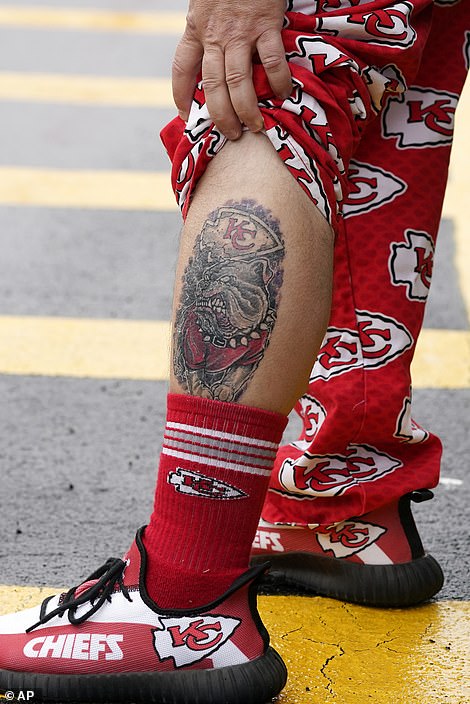 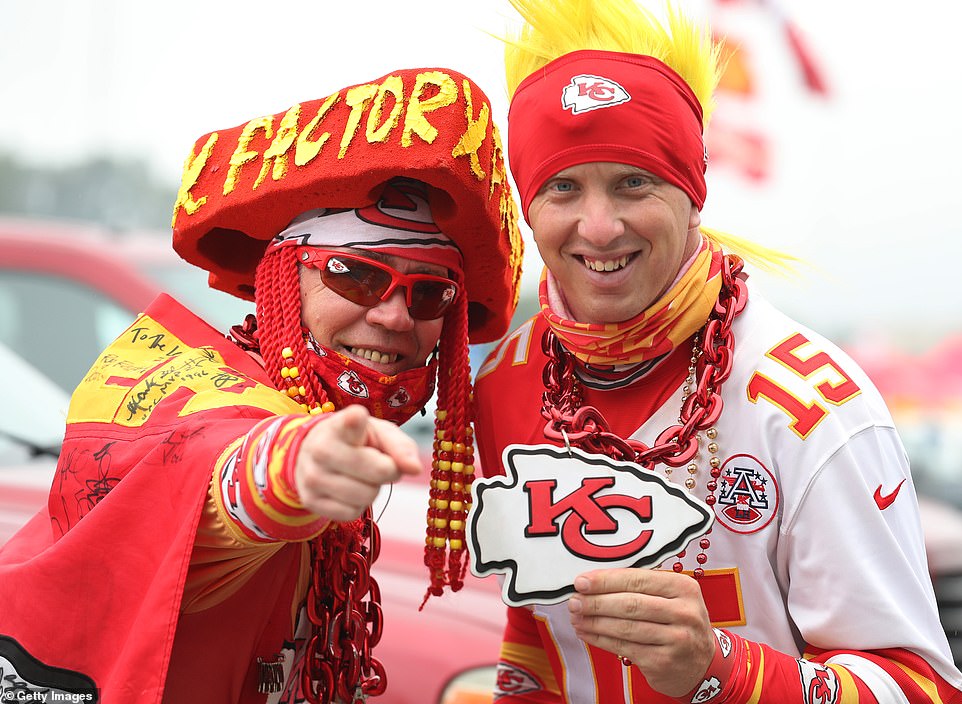 Although they’re no longer allowed to wear war paint or headdresses, Chiefs fans still got into character for Thursday’s kickoff 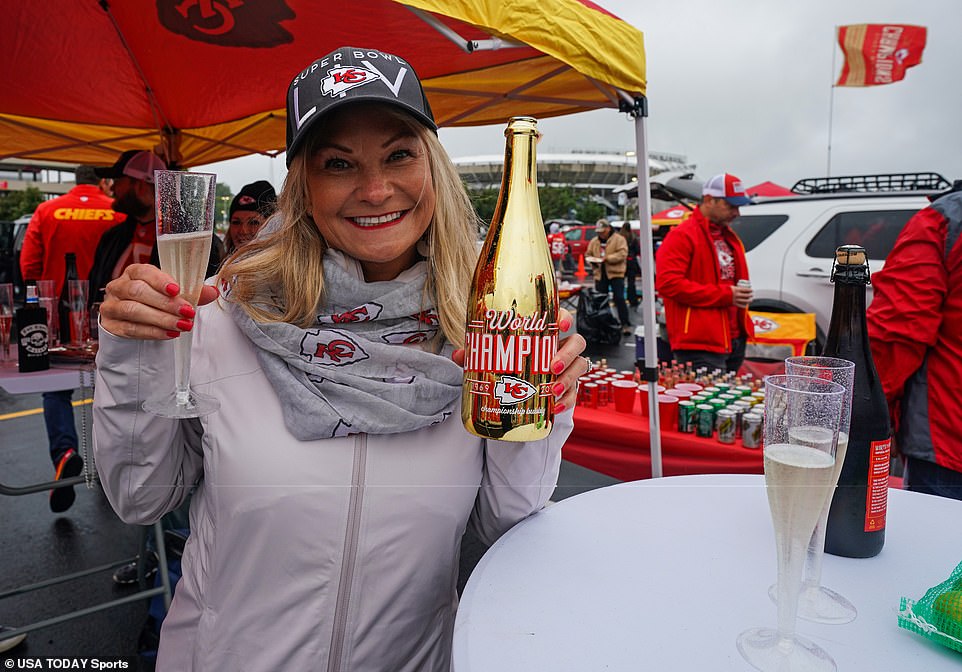 Students at nearby Haskell Indian Nations University in Lawrence, Kansas, were among those who demanded changes.

‘Using this mascot and having this fan base of predominantly white people wearing face paint and headdresses and doing the tomahawk chop, and it energizes them and gives them this sense of power, and then thinking there is nothing wrong with doing that is just mind boggling to me,’ said William Wilkinson, a 22-year-old business major from Madison, Wisconsin, who is Navajo, Cherokee, Mandan, Hidatsa and Arikara.

Wilkinson also said the Chiefs should change their nickname, although the franchise has maintained for years that it is named in honor of H. Roe Bartle. The philanthropist and two-term Kansas City mayor, whose nickname was ‘Chief,’ was instrumental in helping to relocate the team from Dallas.

Ty Rowton, a self-described superfan who goes to games as the X-Factor, often attends games with a foam Arrowhead on his head, beads and a cape signed by players. But he has made one change to his costume: Instead of face paint, Rowton planned to stick duct tape with Bible verses on his face. 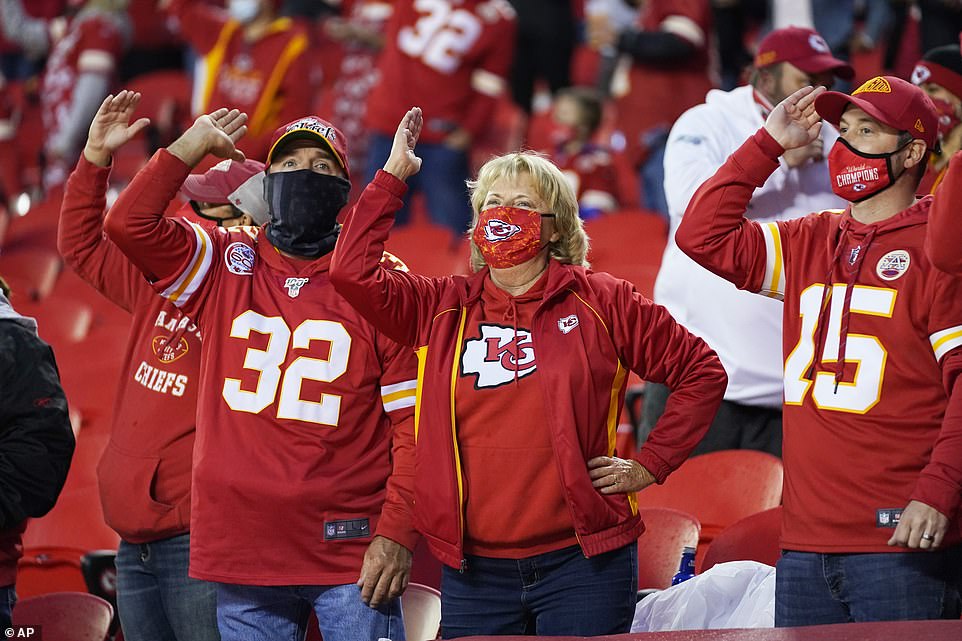 Rowton was stopped by security when he wore the getup for a training camp practice but said he has since gotten clearance for it. He thinks the team’s changes are an overreaction. He also thinks the team should keep the tomahawk chop.

‘It is something that gets us riled up together and that we do as one. It has never been meant to be disrespectful,’ he said.

Gaylene Crouser, executive director of the Kansas City Indian Center, said it’s wrong to use ‘a race of people as a mascot.’

‘It has always been swept under the rug,’ she said, ‘but because the Washington team was leaned on so hard that they made the change, now some of the other ones are starting to feel the heat. I hope this is the beginning of the end of this acceptable racism.’

Nationwide calls to address racial issues have become more prevalent since Floyd died May 25 after a white Minneapolis police officer pressed his knee into the handcuffed Black man’s neck for nearly eight minutes during an arrest. Four officers were fired and have been charged in Floyd’s death, and protests have continued to grip the nation. 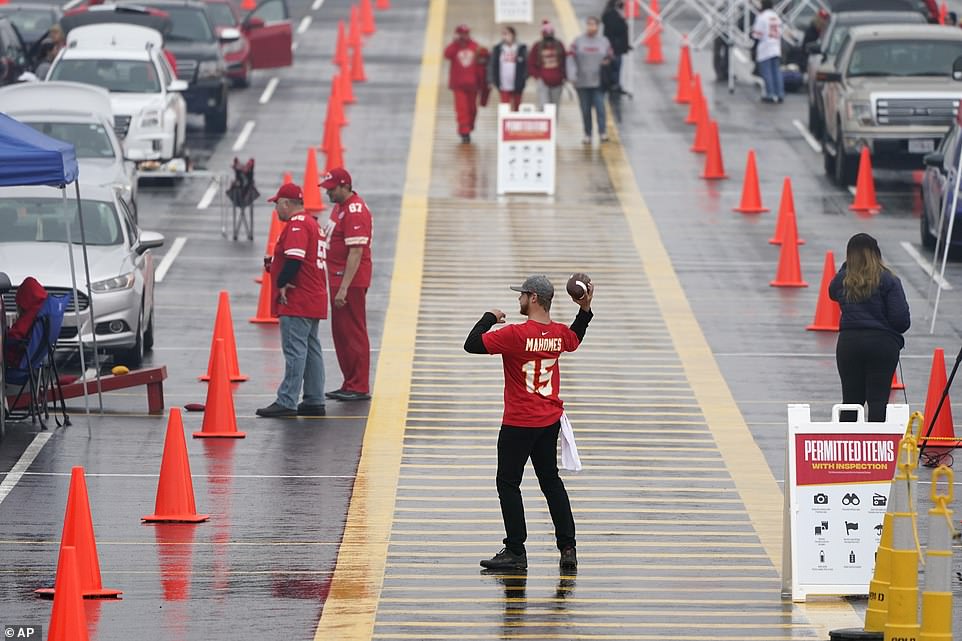 The Chiefs will be required to keep a record of fans in suites and whoever purchased blocks of tickets in the stands for their game Thursday night so that contact tracing can be done in the event of an outbreak.

Michelle Pekarsky of the Kansas City Health Department also said disease investigators will question anybody they interview for 2 1/2 weeks after the game whether they were in attendance.

Public health officials believe those measures will help to quickly identify whether Arrowhead Stadium was the cause of a COVID-19 outbreak.

Are you ready for some football?

The kickoff of the NFL season Thursday with 17,000 fans in the stadium illustrates the nation’s determination to resume its most popular sport in the middle of a pandemic that has already killed nearly 200,000 Americans.

The topic has led to passionate debates at the state and local level, including whether to allow high school seasons to proceed and how many fans to allow in professional and college stadiums.

While Major League Baseball and the NBA have played without fans, the Super Bowl champion Kansas City Chiefs were allowed to open the season Thursday night against the Houston Texans at 22 percent capacity. The remainder of the NFL teams start their seasons Sunday with restrictions that vary by stadium, with some games devoid of fans and others with scaled-back crowd sizes like Kansas City.

Across the country, many high schools have started football, but states like California and Illinois cancelled the entire season. There have been scattered outbreaks among players, including an entire football team and marching band in a small town in Alabama that had to go into quarantine because of exposure to the virus.

Pennsylvania lawmakers have been sparring this week with the Democratic governor over coronavirus legislation that would give individual districts and private schools sole authority to decide how to conduct football and other sports.

For football-obsessed fans, the start of the season is a relief after being cooped up for months – an opportunity to gather with friends at bars, go to games and tailgate parties or head to sportsbooks to place bets. Sportsbooks are expecting a record-breaking season in terms of the amount of money wagered, driven by a public that’s eager for action after months of lockdowns. 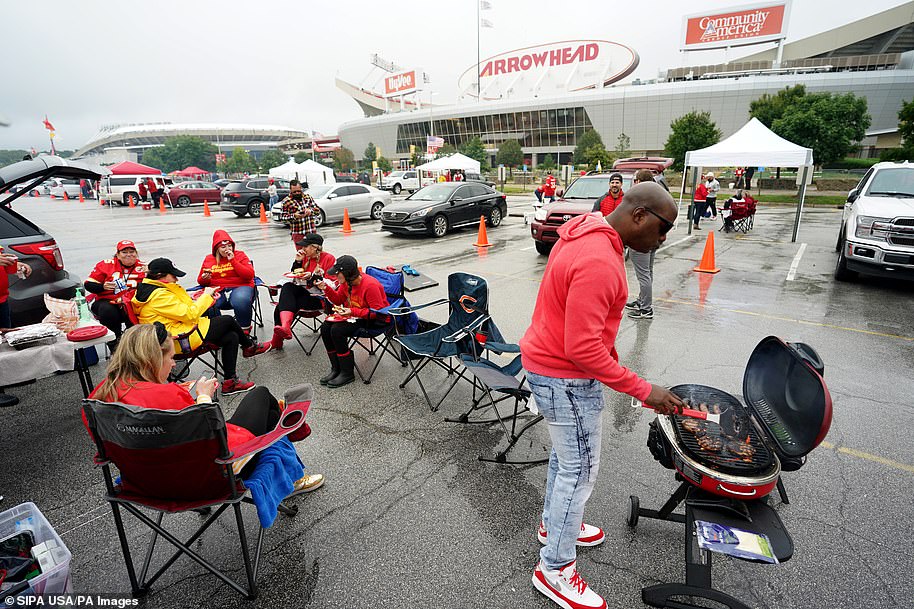 And with each of these gatherings comes a greater health risk.

For fans, watching football on TV can be done safely and is a welcome way ‘to go back to normal things in our lives that we love and enjoy,’ said Ali Mokdad, professor of health metrics sciences at the University of Washington in Seattle.

For players, coaches and fans who venture into stadiums, a safe season hinges on what else people are willing to give up to lower the case numbers and control the level of community spread that could breed problems.

‘If we want to enjoy our football, we have to sacrifice, or let go of certain things we used to do before – such as bars and crowded restaurants and places like this where we know infection is more likely to happen,’ Mokdad said.

Kansas City Chiefs president Mark Donovan said that he hopes the opener will send a message to the country that teams can safely return to the playing field during a pandemic. He and other Chiefs executives had a phone conversation with NFL Commissioner Roger Goodell in which he expressed confidence in the team’s plan.

‘The commissioner said it best. He said, ‘You’ve got the best fans in the NFL and I know you’ll take pride in doing this right,” Donovan said. 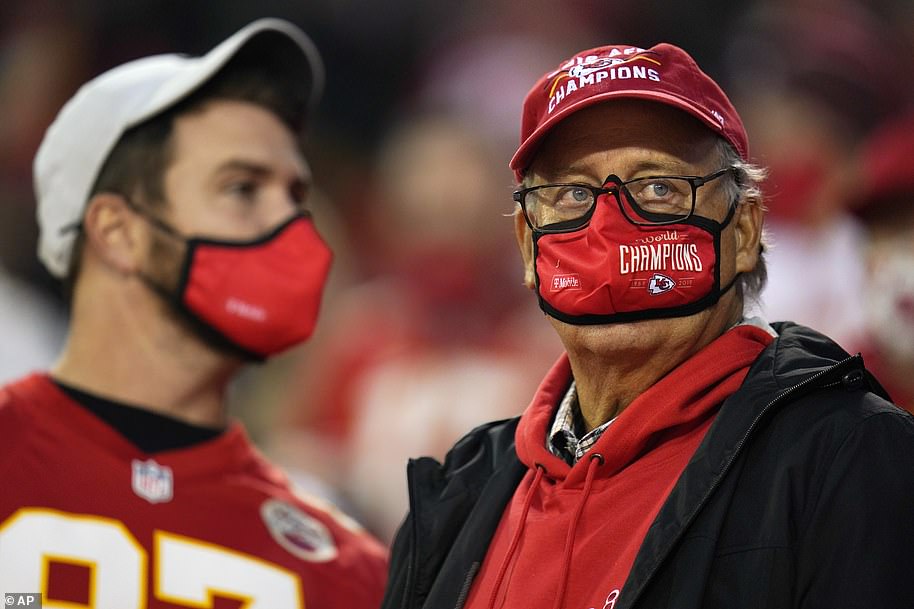 Dr. Amesh Adalja, an infectious diseases expert at the Johns Hopkins Center for Health Security in Baltimore, said the NFL has the resources to protect players by testing them frequently. He’s more concerned about fans cheering in the stands. Yelling spreads virus particles in the air. Even with a lot of empty seats in a stadium because of capacity limits, fans may need to stand in line for bathrooms or concessions where it’s difficult to stay 6 feet apart.

A few fans could carry home the virus and spread it to the broader community. Trying to stop an outbreak with contact tracing could swamp a public health department.

Athletic Director Jeremy Lewis got a firsthand look at the health risks associated with football gatherings last month when fans at American Fork High School in Utah were disregarding mask and social distancing requirements during a game. So Lewis grabbed the microphone during a quarter break to tell the crowd that play would not continue until fans complied with mask and social-distancing requirements.

‘If you want to attend the game then agree to the policies that are in place,’ Lewis said Thursday. ‘My guess is if the people can’t follow those policies then they’re going to end up not having spectators.’ 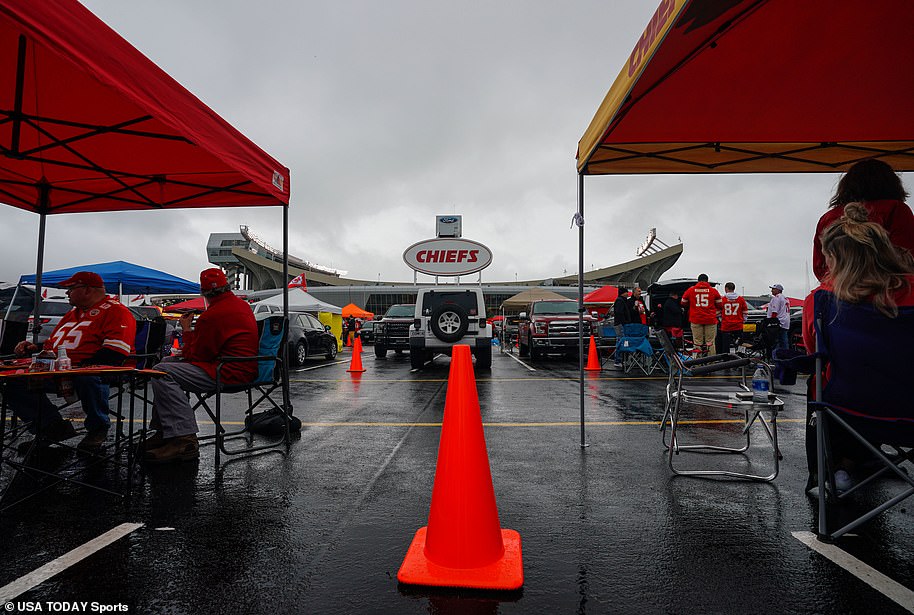