NFL: Patriots fan who was abused in viral video was concerned ‘about the narrative being switched’

New England Patriots fan Jerry Edmond has revealed he kept his cool amid a torrent of abuse by a couple during his team’s loss to Las Vegas because he didn’t want it to ruin his first NFL game, nor allow ‘the narrative’ to be changed.

Edmond went viral in a video posted to Twitter on Tuesday, following the Pats’ excruciating and equally shocking 30-24 loss to the Raiders Sunday.

As if the loss wasn’t painful enough, viral video surfaced this week showing a woman verbally abusing Edmond as Raiders players and fans celebrated. The woman, wearing a Derek Carr jersey, repeatedly lunged within the personal space of Edmond who remained stoic amid a barrage of abuse.

Edmond has since explained her ‘husband’ was also involved in the antisocial behavior, before elaborating on how he managed to keep his cool.

Speaking to League of Justice, the Patriots fan said he was approached by the man as Bill Belichick’s team went up 24-17 with 3:43 remaining in the fourth quarter.

‘I didn’t say anything crazy to anybody,’ Edmond explained. ‘All I said was “That’s the Derek Carr, I know,” and then the husband comes over.

‘When the Patriots scored, I yelled “yep Raiders fans, I think it’s time to go home.” And he comes over and he’s like, “Oh, so you’re talking to me?”‘

Following Chandler Jones’s fumble recovery touchdown for a Raiders win after time expired, the abuse got worse – as seen on tape.

While being sworn at repeatedly, Edmond was trying to digest just how his Patriots had thrown the game away from a seemingly unlosable position, and resultantly was drowning out the woman.

‘I wasn’t going to try to make a fool out of myself and trying to make a big scene and everything like that. I didn’t want to ruin anybody else’s night,’ he said. 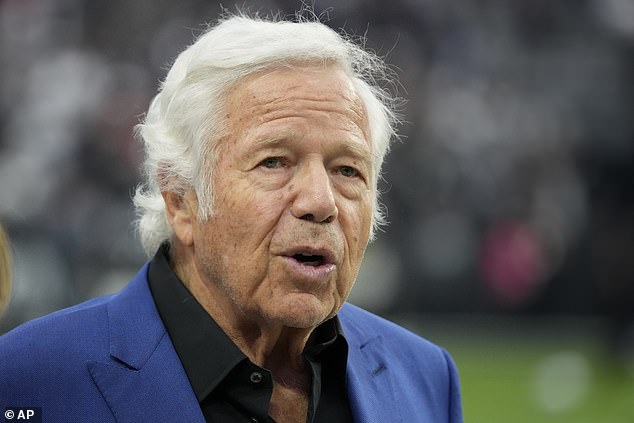 Known for his generosity, Robert Kraft extended himself once more to assist Patriots fan Jerry Edmond with game tickets and pregame field passes after receiving abuse at a NE game in LV

‘Neither did I want to ruin my night. So like at the end of the day I came here to have fun at a game I’m not gonna let her ruin my experience.’

While Edmond was trying to enjoy the occasion, he did have concerns if he were to respond the optics would be drastically different.

‘[I was worried about] the narrative being switched. If I did anything, all of a sudden being turned on to me, being like the bad guy in this situation. Obviously she’s a woman,’ he continued.

‘I’m never gonna put my hands on a woman. And I didn’t want anything to like, twist and turn to make it seem like I was the one aggravating anybody like that and doing anything to that to that extreme.’ 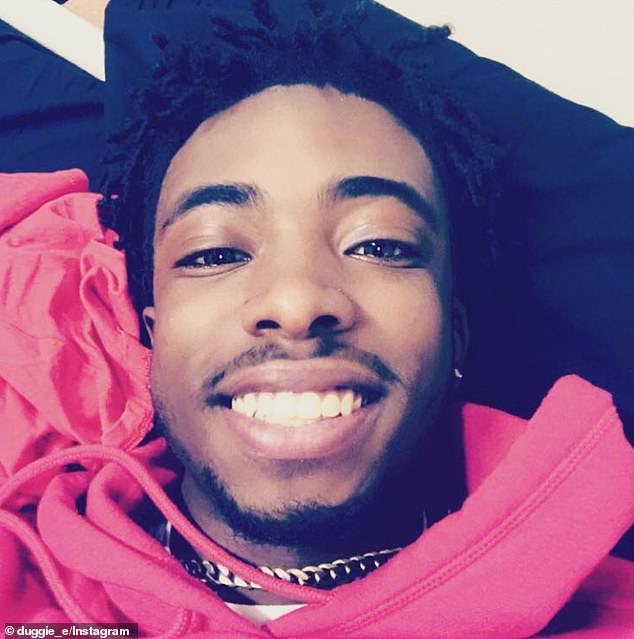 Edmond, the fan in question, replied to a post of the abuse, confirming it was indeed him

A voicemail from Kraft to Edmond was shared by League of Justice, in which the billionaire called to thank him for ‘representing our brand in a very classy way’ in ‘an environment that could’ve been very provoking.’

He offered Edmond the chance to attend the game vs. Cincinnati on Saturday and take in the experience with pregame field passes, a customized jersey, and of course, a more suitable environment to watch this week’s New England game.

The Raiders have extended an olive branch to Edmond, offering him an all-expenses return trip to Allegiant Stadium at a time of his choosing in the future.

Las Vegas Review-Journal reported Mark Davis’s team will fly him to Sin City and put him up in a hotel room for an event of his choosing – be it a concert, event or football game.

After the release of the video on social media, a digital search party was put out to identify Edmond. Within two hours of the post being up Tuesday, he commented and confirmed himself as the victim. 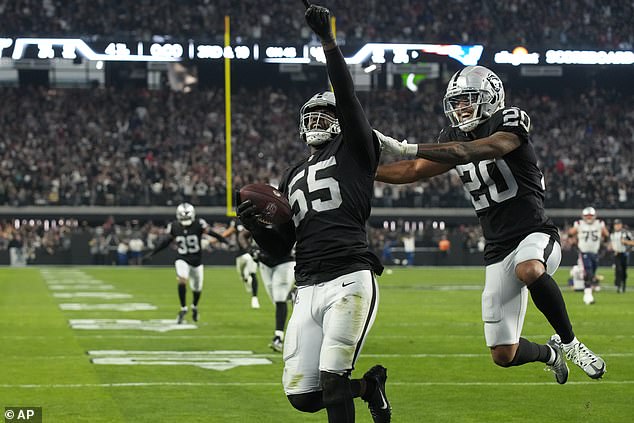 No matter the view, last Sunday’s stunning loss to Las Vegas was painful for all of New England

‘I’d like to thank everyone for all the kind words,’ Edmond began.

‘I’m the Patriots fan in the video, my name is Jerry Edmond and that was my first ever NFL game.’

Las Vegas team president Sandra Douglass Morgan tweeted a reply to Edmond’s comment, saying: ‘On behalf of the Raiders, we appreciate the way you conducted yourself. No fan should have to endure that type of behavior. We will be in touch.’

Now, thanks to his extraordinary grace, he’ll see his second game in just six days.

Edmond went to school at Central Connecticut State between 2016-2020 and was on scholarship.

The Milton, CT. native was on the Track & Field team and competed in the 400m and 500m races. He graduated from CCSU with a BA in Psychological Science and a minor in Biology.