Over one in five youngsters (22.9 per cent) who started school in September 2021 were overweight or obese in England.

This was down from nearly three in 10 (27.7 per cent) the year before, which was an ‘unprecedented’ rise and blamed on the knock-on effects of closing schools.

Rates also dropped in overweight children, reducing from 40.9 per cent to 37.8 per cent.

The measure for the Year 6 age group, which is only a preliminary estimate, is still up on levels recorded before Covid. But younger age groups are now below previous marks.

It comes after a study yesterday revealed the number of healthy children choosing to diet has tripled in the last two decades.

An Oxford University study discovered more than a quarter of children are on diets, including those of a healthy weight.

NHS Digital data shows Just over one in five youngsters (22.9 per cent) who started school in September 2021 were overweight or obese in England. This was down from nearly three in 10 (27.7 per cent) the year before 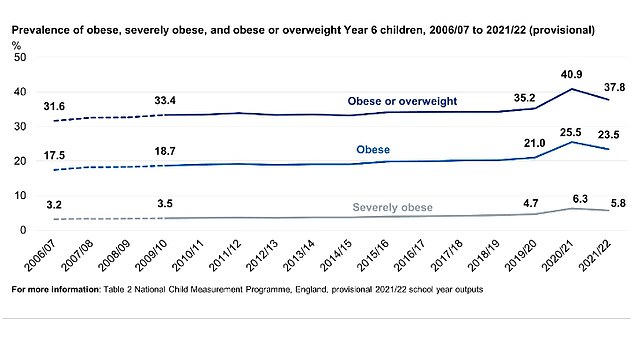 A similar drop in the proportion of older children who are either overweight or obese, dropping from 40.9 per cent to 37.8 per cent 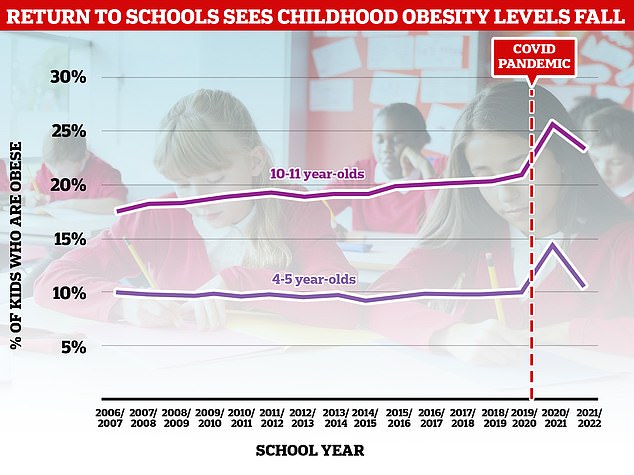 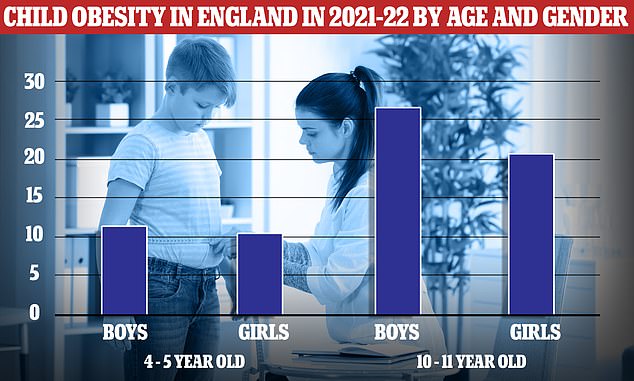 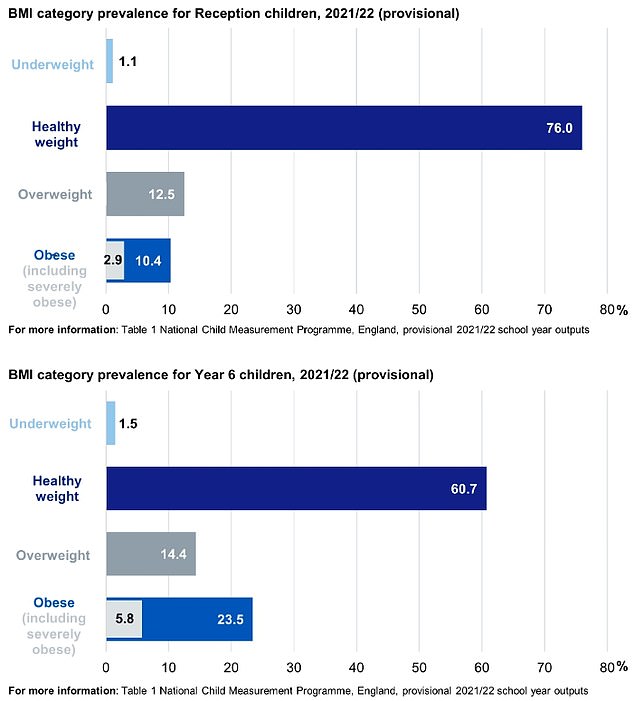 Graph shows: The proportion of children in Reception and Year 6 that are underweight, healthy weight, overweight, obese and severely obese as of May 2022

Number of healthy children trying to lose weight has tripled in past 20 years, study finds

The number of healthy children choosing to diet has tripled in the last two decades, research suggests.

Oxford University experts quizzed 34,000 children about whether they were trying to lose, maintain or gain weight.

Weight loss attempts among those with a healthy BMI jumped from 5 per cent when the study began in 1997 to 14 per cent in 2016.

Meanwhile, the number of overweight children trying to shed pounds quadrupled — and the proportion of obese youngsters try to lose weight double.

The team said it was a ‘success’ that overweight and obese youngsters were trying to lose weight.

But attempts among healthy children ‘raises concerns’, they said, while campaigners said healthy youngsters who are dieting should be told to ‘snap out of it’.

Tam Fry, chairman of the National Obesity Forum, said: ‘[Today’s] figures should be read together with yesterday’s data from the Health Survey for England showing that overweight children really are trying to shift significant amounts of fat.

‘The end-of-year [National Child Measurement Programme] report should not be dramatically different and this will be good news indeed.’

The NHS National Child Measurement Programme measures the height and weight of children in reception and then again in year six.

It shows the proportion of overweight, obese and morbidly obese children in both age groups fell compared to the previous year.

Data for 2020 to 2021 went up to March last year, when schools first fully reopened, meaning it included the full period of school closures.

Commenting on the figures that year,  Caroline Cerny, from the Obesity Health Alliance said ‘several aspects of the pandemic’ could have caused the rise in obesity.

And Dr Max Davie, officer for health improvement at the Royal College of Paediatrics and Child Health, told The Guardian lockdowns ‘may have been a key factor’ behind it.

The proportion of healthy weight children also increased this year.

There was a slight increase in the proportion of underweight children across both age groups.

Obesity is still more prevalent in boys than girls across both age groups.

For reception-age children this year, 10.6 per cent of boys were obese compared to 10.2 per cent of girls.

‘The final report later this year will present updated figures, including breakdowns by geography, ethnicity and levels of deprivation.’