NHS hospitals are on track for their busiest winter in a decade, statistics revealed today.

There were more hospital admissions between April and September this year – 2.95million – than in any comparable period since at least 2009.

Some 1.49million overnight stays were recorded in English hospitals in the second quarter of the year, today’s figures showed.

This was a rise of around 300,000 on the same three months last year, and was the second busiest 12 weeks on record.

The numbers add to recent analysis which showed nine out of 10 overnight beds in England were full during that time.

Unions have warned this winter could be ‘unmanageable’ for NHS hospitals and the health service has lost its ability to catch up during the warmer months.

The number of people admitted to English hospitals between July and September was higher than in any other year in the past decade – record admissions are paving the way for a busy winter, experts say

‘Record admissions paint a picture of an NHS under severe stress,’ the Royal College of Surgeons’s Susan Hill said.

‘Patients suffer from over-crowding, and clinical staff are over-worked.’

The first quarter of this year, from April to June, was also the busiest of the past decade, with 1.46million hospital stays.

This suggests the third and fourth quarters are set to follow suit when admissions increase as the year goes on – they tend to peak in the depth of winter in January and February.

The NHS is relying on less qualified staff to plug workforce gaps due to a huge shortage of nurses, analysis by an independent think-tank revealed this week.

The Health Foundation warned there were currently 44,000 vacancies in England – 12 per cent of the entire nursing workforce.

It said that, if current trends continue, the number could surge to 100,000 within a decade, posing a serious threat to patient care.

Anita Charlesworth, director of research and economics at the Health Foundation, said: ‘Nursing shortages continue to deepen and are inevitably impacting on the frontline.

‘Services are being forced to make do with shortfalls of increasingly pressurised nurses and rely on less-skilled support staff to pick up the slack.’

Hospitals used to be able to catch up from busy winters when patient numbers dipped in the summer, representatives said, but that is no longer the case.

Saffron Cordery is the deputy chief executive of NHS Providers, an official body which speaks on behalf of workers in hospitals and ambulance services.

She said: ‘There is no denying that trusts are under immense pressure due to rapidly rising demand.

‘This year, high demand has meant that trusts have been unable to catch up during the summer months – something that we would normally expect to see.

‘There has also been an increase in the complexity of treatment as increasing numbers of patients have multiple conditions.

‘These surges in demand in emergency care impact the wider health and care system.

‘In some cases this winter, routine and planned operations may be cancelled as a last resort to ensure that staff can focus on patients that need their attention most urgently.’

Admission numbers are simply the latest in a string of signs the NHS is under crippling pressure.

A&E waits have hit a record high this year, along with the number of people waiting for routine operations – there are 4.4million on that waiting list. 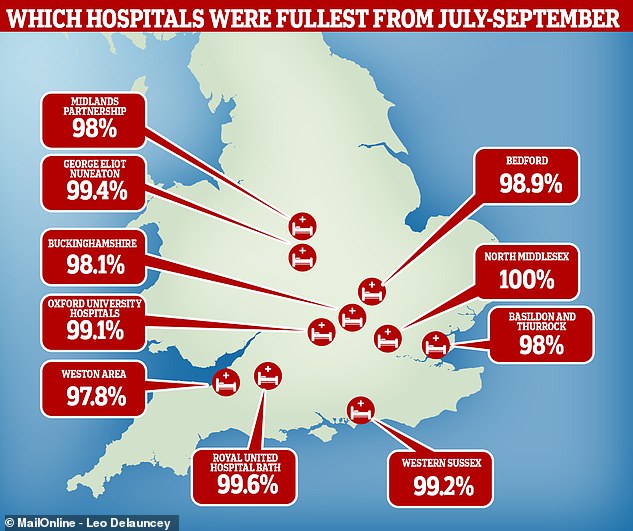 Five NHS hospitals were more than 99 per cent full during July, August and September, with one in London a staggering 100 per cent full – officials at the trust in North Middlesex said they were using extra beds not recorded in statistics

Staff shortages are being blamed for patients having to wait longer; statistics show the health service is short of 44,000 nurses and the figure is rising.

‘The truth is that demand is growing at an unmanageable rate,’ said the national secretary of union GMB, which represents NHS staff and public sector workers.

‘Our members report being pressured to work ever longer shifts, denying them respite and time with their families.

‘Many NHS workers are simply burning out. The risk of assault, sometimes from frustrated patients, is growing.

‘The NHS will continue to buckle under the strain until we rebuild our local preventative health and care provision.’

A lack of social care in local communities also shoulders some of the blame for pressure on hospitals, according to experts.

People – often elderly or disabled – who can’t get medical help from community health workers or carers can feel they have no option but to go to a hospital when something’s wrong. 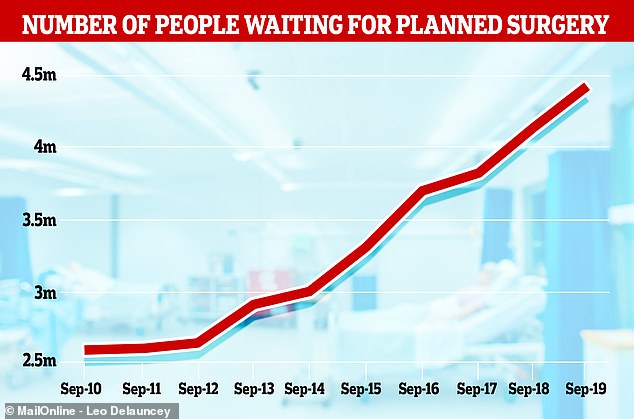 Data for September showed the number of people waiting for routine surgery is at a record high for the sixth time this year, with 4,420,000 people on the list

The RCS’s Miss Hill added: ‘Shortage of social care support particularly for elderly frail people means that some have no alternative but to attend A and E departments in the event of suffering a fall or feeling unwell when they might just need a little extra help in their own home.

‘Meanwhile, too many people languish on unacceptably long waiting lists for much needed surgery.

‘Their physical and mental health deteriorates as they wait for treatment, with devastating effects on their wellbeing, their employment and their families.’