The NHS has ringfenced £1.3billion to cover Covid compensation pay-outs, it was claimed today.

An annual report from NHS Resolution, the organisation which handles negligence disputes on behalf of the health service, anticipates a surge in claims for treatment delays, cancellations and misdiagnoses.

Families are already contacting law firms to seek compensation after losing loved ones during the pandemic.

Campaigners have also warned that the figure ‘may not be enough’.

An annual report from NHS Resolution, which handles negligence disputes on behalf of the health service, anticipates a surge in claims for treatment delays, cancellations and misdiagnoses. Graph shows how much the NHS has paid out in claims over the past decade

Jackie Linehan, legal director at negligence specialists Enable Law, represents the family of a man who died in June 2020 after his urgent heart surgery was delayed for several months.

She told the Daily Telegraph: ‘We anticipate the number of claims relating to deaths and avoidable injuries to increase because of the delays in treatment throughout 2020 and 2021.

‘A lot of individuals are only just realising the consequences of not being seen much sooner.’ 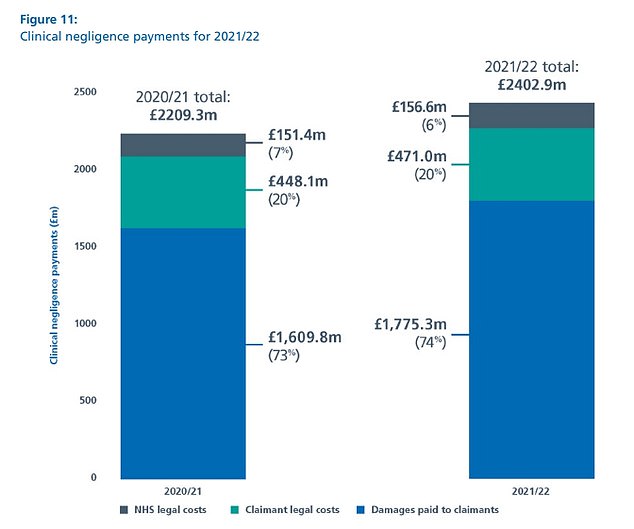 The NHS compensation system — which costs the taxpayer around £2billion each year — is ‘not fit for purpose’, MPs warned earlier this year. Graph breaks down fees paid out

Time-critical services for seriously ill patients may also be scaled back or stopped, the letter warned.

Mrs Pritchard admitted to MPs that the NHS was not expecting to hit a major cancer target by March. She said a surge in patients coming forward for cancer checks meant it would no longer be possible to ensure the number waiting more than 62 days to start treatment following an urgent referral would return to pre-pandemic levels by then.

Mrs Pritchard said: ‘We are off target and off trajectory.’

Professor Gordon Wishart, chief medical officer at Check4Cancer, told the paper: ‘The fact NHS Resolution has set aside £1.3billion for future clinical negligence claims is an acknowledgement that the unintended consequences of Covid restrictions will continue for some time, and that these claims are likely to succeed.

‘Given the current scale of excess deaths from many conditions including cancer and cardiovascular disease, £1.3billion may not be enough.’

NHS Resolution said the pot was for ‘new Covid risks and potential claims’.

The £1.3billion figure has been allocated for 2021/22, with £470million expected to be spent on claims relating to the treatment of Covid — up from £350million in the first year of the pandemic.

Around £610million has been set aside for claims relating to misdiagnoses and delays to treatment due to the pandemic — up from £210 one year earlier.

NHS Resolution admitted in its annual report that the total sum is ‘fairly limited’ because services weren’t disrupted as much in 2021/22 and most claims relate to maternity services which operated largely as normal during the pandemic.

It said: ‘While a small number of claims related to Covid have been received, it will take several years for the impacts of Covid to fully materialise, due to the time lags between incidents, claims and ultimately their settlement.

‘As a result, there is limited experience from which to quantify the impacts of Covid on the provisions and our estimates are subject to uncertainty.’

Pandemic-related claims are expected to centre around delays, cancellations and misdiagnoses.

Thousands of patients saw their treatment postponed because of the pandemic.

It has created a huge backlog — with 7.1million in the queue by September — which the NHS is struggling to battle through. Hundreds of thousands have waited for more than a year.

Delays are thought to be driving an increase in excess deaths, with thousands of patients dying because they have not received timely care, Health Secretary Steve Barclay admitted yesterday.

Data from the Office for National Statistics shows England and Wales have logged around eight per cent more deaths this year compared to the pre-pandemic average.

Mr Barclay pointed to a rise in middle-aged people with heart problems at The Spectator Health Summit yesterday.

He said: ‘It’s the result of delays in that age group seeing the GP because of the pandemic and in some cases not getting statins or hypertensives in time.

‘When coupled with delays to ambulance times, we see this reflected in the excess death numbers.

‘In time we may see a similar challenge in cancer data.’

Experts warned last week that England is already seeing a rise in cancer deaths due to pandemic-related delays.

Official figures show up to 230 additional fatalities due to the disease are being registered weekly.

Professor Pat Price, a leading oncologist warned the cancer backlog is the ‘deadliest and most time-pressing of all’ and failing to tackle it will see excess cancer deaths for ‘years to come’.

The agency already pays out around £2.2billion a year in compensation and legal fees every year.

NHS officials pay people who have been physically or mentally harmed by vaccines from a separate pot.

More than 1,200 claims for compensation have been made to the UK’s vaccine damage payment scheme.

It entitles families to a £120,000 payment if a loved one dies or is left significantly disabled as a result of Government-recommended jabs, not just Covid ones.

The first Covid vaccine pay-out was to Vikki Spit, the wife of rock musician Lord Zion, who died from a blood clot following his AstraZeneca jab.