NHS trial has a beam of light check your blood pressure

A device that monitors blood pressure by shining light along the skin could be available in the next few months.

The movement of the light beams changes in response to the pressure in the blood vessels — the device analyses these tiny changes to calculate blood pressure. An initial study showed it is more accurate than the traditional cuffs, and it is now being compared with the gold standard hospital blood pressure test in a new NHS trial.

High blood pressure, or hypertension, is a reading consistently over 140/90. It means every time the heart beats, blood is flowing with greater force than normal, which can weaken the heart and artery walls. Hypertension is a leading cause of strokes and a major cause of heart attacks, heart failure and kidney disease.

Meanwhile, low blood pressure (hypotension) is a reading less than 90/60, and can cause dizziness and fainting.

There are a number of problems with standard cuff monitors, which work by detecting and measuring the vibrations of the blood against the artery walls.

They provide only a snapshot reading, but blood pressure is dynamic and can change by the minute. They are also prone to false high readings, especially if patients are anxious when seeing a doctor. 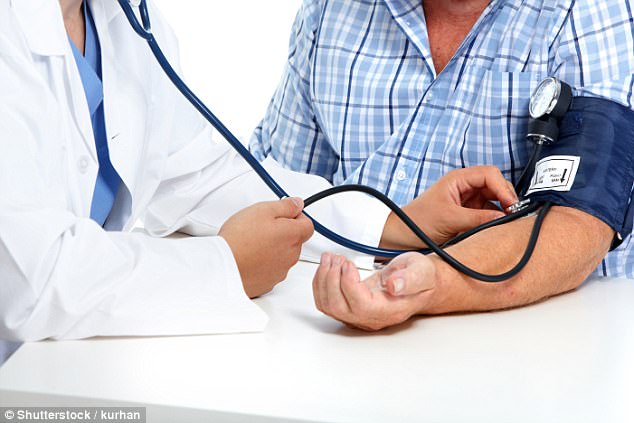 Problematic: There are a number of problems with standard cuff monitors, which work by detecting and measuring the vibrations of the blood against the artery walls

The new device, TLT Sapphire, aims to eliminate the risk of so-called white coat hypertension and is also thought to be more accurate, as it can be worn for longer periods, so gives a more detailed assessment of the trend in blood pressure readings.

The size of a fingernail and thickness of a credit card, the device is placed on an area of skin and held there with a plaster. As soon as it’s in contact with skin, it starts to take readings, which are sent wirelessly, minute by minute, to a smartphone or computer.

Developed by UK-based Tarilian Laser Technologies, the device contains a tiny light bulb that sends beams of light parallel to the surface of the skin — a sensor in the device then measures any tiny movements in these beams, which are thought to be proportional to the blood pressure in the vessel beneath.

In an initial study of 85 patients presented at the European Society of Hypertension in 2012, the new technology outperformed cuff-based devices. An independent study is now under way, led by Dr Melvin Lobo, a consultant cardiologist at St Bartholomew’s Hospital in London, where the device is being compared to an arterial line measurement — most commonly used in intensive care to monitor blood pressure directly and in real-time.

Results are expected in December ahead of the launch of the device, which will cost £150 and be available to use at home, as well as in GP surgeries and hospitals.

‘This is the first time that light technology has been applied successfully to record and track blood pressure in real-time,’ says Dr Punit Ramrakha, a consultant cardiologist at the Hammersmith Hospital in London.

‘It may transform blood pressure care not only for critically ill patients, who will no longer need tubes inserted in arteries for monitoring, but also for the “walking well”, where keeping track of blood pressure becomes as easy as checking an app on your phone.’

■ Meanwhile, drivers with high blood pressure might be best to avoid traffic jams, suggests a recent study in the Journal of Clinical Hypertension.

Longer exposure to traffic congestion also led to longer-term higher systolic and diastolic blood pressures, say the researchers from the American University of Beirut in Lebanon.

More research is planned, as the exact mechanisms are unclear.

Scientists at the University of Leeds have developed scanning techniques to show a baby’s heart in the womb. It’s hoped this could reduce miscarriages.

Using MRI technology and computer software, they obtained images of foetal hearts between 95 and 143 days in the womb. From these, they identified that the greatest changes occurred at 124 days (about 17 weeks), with the four chambers of the heart developing in four days.

At present, a baby’s heart can only be effectively monitored after 20 weeks — and it’s believed that one in ten miscarriages is caused by the heart’s failure to form normally.

■ Nintendo Wii consoles can help multiple sclerosis symptoms, a study by Bournemouth University and Poole Hospital has found. Three years after patients were given the consoles, they were more active and had improved balance and symptoms — the Wii meant they could build up activity gradually, allowing for their fluctuating symptoms.

A mouthwash made of squid ink could detect hidden gum disease.

The fluid gets trapped in diseased tissue that can form between the teeth and gums.

When a laser light is shone on the area, it causes the squid ink — which contains particles that can absorb light — to swell, creating pressure that can be detected by ultrasound. At present, dentists use a sharp probe to measure any pockets of disease, but this is not always accurate and can be painful.

Researchers at the University of California have tested the new approach on pigs and hope to try it on humans soon, they report in the Journal of Dental Research.