Hospital bosses should raid their NHS budgets to pay for care home places so patients do not remain stuck on ‘lobster trap’ wards, Labour will demand today.

Wes Streeting, the party’s health spokesman, will praise ‘trailblazing’ trust leaders who have voluntarily chosen to fund social care to ease ‘gridlock’ in their hospitals.

And he will tell executives gathered at the NHS Providers conference in Liverpool that more should do the same, while criticising the government for failing to spend a penny of its promised £500million delayed discharge fund.

The call comes after the country’s leading A&E doctor warned hospitals are so full it is harming elderly patients.

Dr Adrian Boyle compared them to lobster traps after NHS figures showed more than 13,500 people are stranded in hospitals every day due to lack of available social care packages.

Medically fit patients spend as long as 9 months stuck in hospital in some cases.

The bed blockers are hampering ambulance’s ability to offload patients and respond promptly to 999 calls and slowing the rate at which hospitals can tackle record waiting lists.

Mr Streeting is expected to say: ‘The warning that hospitals are becoming “lobster traps” needs to be met with action. 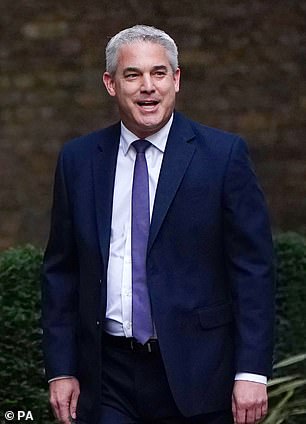 Nurses’ strike will fuel inflation and ‘help no one’, Health Secretary warns

The nursing union’s pay demands will help no one and could worsen inflation, the Health Secretary has said.

Steve Barclay said the action, which is set to see hundreds of thousands of nurses walk out across the UK before Christmas in a bid for a 17.6 per cent pay rise and better working conditions, is ‘neither reasonable nor affordable’.

The Royal College of Nursing (RCN) encouraged its 300,000 members to back strikes over the Government’s ‘insulting’ pay offer — which amounts to roughly 4 per cent, or £1,400.

It confirmed last week that around 100 hospitals in England will be affected by the disruption.

But Mr Barclay said the strikes are in ‘nobody’s best interests’ and meeting the pay demand — which would cost £9billion, around six per cent of the entire NHS budget — would ‘turbocharge inflation’.

He defended the Government’s pay award as a ‘balanced increase’, which is ‘fair for nurses and the taxpayer’.

But unions today warned that strikes are the ‘only option’ to save the NHS, which is a ‘breaking point’ and staffed by health workers who are ‘struggling to make ends meet’.

Unite, which will ballot thousands more of its 100,000 NHS workers on industrial action, said medics are in a ‘fight for the NHS’s life’ and warned the Government’s budget this week is the ‘last chance to avert a winter of strikes’.

‘Thousands of patients are stuck in hospital when they don’t need to be there. It’s miserable for them, reduces capacity in the NHS, and is more expensive for the taxpayer.

‘Not a penny of the funding earmarked to increase capacity in social care this winter has left Whitehall.

‘Every day of delay means less time for the health and care services to prepare.

‘Health Secretary Steve Barclay needs to pull his finger out, get that funding out the door before it is too late, and ensure patients aren’t stuck in hospital any longer.

‘As well as short-term action, we need long-term reform. A shift in the focus of healthcare, out of the hospital and into the community.

‘The best NHS leaders aren’t waiting for the Government to act.

‘It’s better value for money and means better care for patients. That’s my challenge to you, and my test for the new Integrated Care Systems.’

Integrated Care Systems, which were launched earlier this year, are supposed to see health and social care leaders working more closely together to offer joined up services.

However, a group of leading charities today also warn that the NHS and social care are in the ‘most perilous position in living memory’.

The fallout from the pandemic has ‘turned cracks in the system into gaping chasms’ allowing millions in need to fall through the system, they say.

The 12 leading health charities – known as the Richmond Group – said the healthcare was facing ‘catastrophe’ as it was overwhelmed by demand.

It warned that 14 million people – one in four of the population – have long-term health needs, which are being exacerbated by treatment delays.

The charities – which include Age UK, the British Red Cross and Macmillan Cancer Support – have written to the Prime Minister demanding more cash for the struggling sectors.

They warned the cost-of-living crisis has left some unable to heat their homes, pay for prescriptions or care costs, run their medical devices, refrigerate their medicine or maintain their diet, leading to medical emergencies.

Instead of moving forward with reforms to help address rising demand from older people, they are instead battling to get back to pre-Covid levels.

‘As charities working with more than 14 million people in England who live with long-term health conditions, we believe that the NHS and Social Care system is now in the most perilous situation in living memory. Increased funding is crucial,’ they wrote.

Duleep Allirajah, chief executive of the Richmond Group of Charities, said the pandemic and cost-of-living crisis was a ‘disastrous double blow’ to those facing chronic health conditions.

‘The extra demands being placed on the NHS and social care as a result were neither predicted nor factored into the last Government Spending Review, and the resulting gap in resources is causing enduring distress and pain to the individuals affected and hurting our economy too,’ he said.

‘The Prime Minister and Chancellor ignore this reality at their peril because it lies at the heart of the crisis affecting the NHS and social care.’

Meanwhile, more than nine in ten (94 per cent) adult social services directors in England do not believe they have the funding or staff to meet the needs of older and disabled people in their area.

The Association of Directors of Adult Social Services poll reveals that 90 per cent of directors back a rise in funding to allow them to recruit care workers on the same pay rates as those for comparable jobs in the NHS.

And 93 per cent want an immediate further cash injection in addition to the £500million ‘discharge fund’, which has been announced but not yet distributed.

Cathie Williams, chief executive of ADASS, which received survey responses from 116 of the country’s 152 directors, said: ‘This is the bleakest autumn survey we have ever had.

‘Only a handful of directors have any confidence they may be able to get through the winter with the funding they have and the care workers available locally.

‘We were fearful in the summer; we are fearful now. This affects all of us.

‘The £500m discharge fund will not solve this, when it is finally distributed – and it is urgently needed.

‘We desperately need another significant injection of emergency funding to provide more help for people at home.’