Nick Kyrgios’ ex girlfriend insists there is no bad blood between the pair after she was accused of calling him a ‘bad person’ just three days ago.

Fans assumed the message, which was later deleted, was directed toward Kyrgios, but the 21-year-old on Sunday insisted the post was misinterpreted.

‘He did nothing. He is a good person and I didn’t mean to comment about him. I don’t know why people think it’s about him. He is a great player and nice person,’ the world No. 95 told Confidential.

Nick Kyrgios (pictured, right) was seen alongside girlfriend Anna Kalinskaya (left) at an NBA game in March, but she confirmed the pair have since split 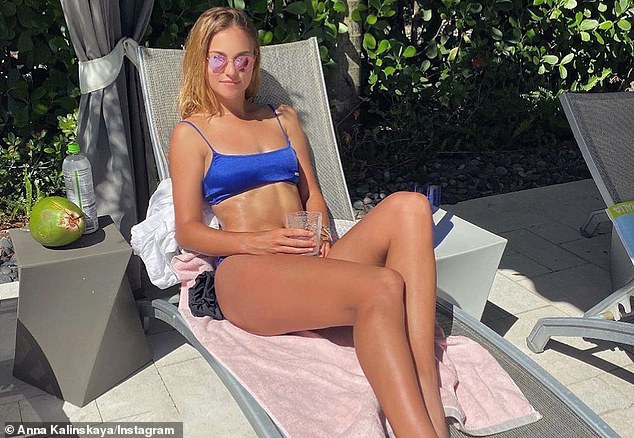 Following the original Instagram post, Kalinskaya confirmed she and Kyrgios had separated after dating for a year.

‘We broke up. We aren’t friends,’ she said. ‘I understand you are his friends and it’s cool but I’m not going to talk about him.

‘Have some respect for me as well please.’

The pair were seen at a street stall in Acapulco, Mexico, in February, with Kyrogios planting a kiss on her forehead.

The 25-year-old Kyrgios remained in Canberra during the coronavirus crisis, while she has been in Miami.

Just last week, she posted a picture of herself playing tennis with another cryptic caption, writing: ‘No matter what you go through, don’t let anyone break you.

‘Be strong, don’t lose yourself, be you. You deserve the best.’

The romance was first rumoured in August last year, after Kyrgios was spotted cheering the Russian on at the 2019 Citi Open in Washington. 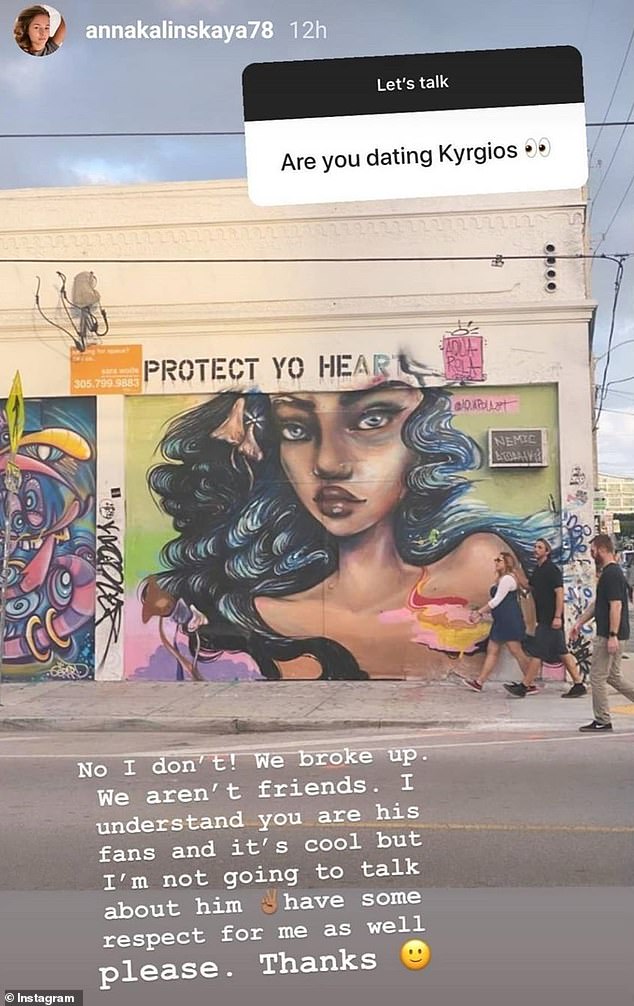 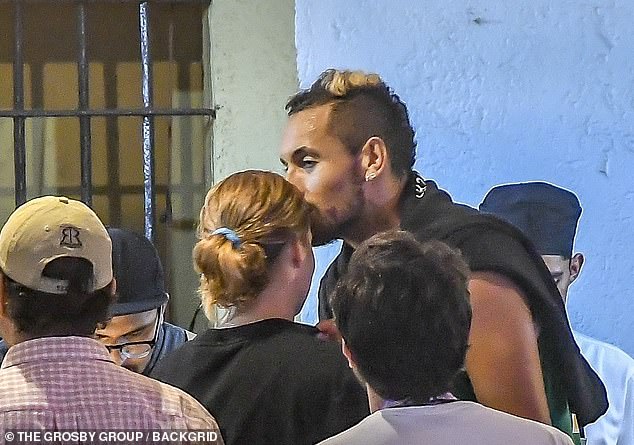 Nick Kyrgios (pictured, right) planted a kiss on the forehead of female tennis player Anna Kalinskaya in Mexico in February after retiring injured from the Mexican Open

During the tournament, the Russian player executed an under arm serve, attributing the tactic to Kyrgios.

‘I think you know why I did it,’ Ms Kalinskaya said afterwards.

‘Because I was watching Nick Kyrgios!’

Ms Kalinskaya, 21, posted a picture of herself with Kyrgios at a Lakers game in Los Angeles on March 10, but has since deleted it.

The two tennis stars were clad in NBA jerseys as they watched the LA Lakers take on the Clippers.

The pair were seen in a passionate moment while sharing tacos at a food stall in Mexico after he retired from the Mexican Open in February. 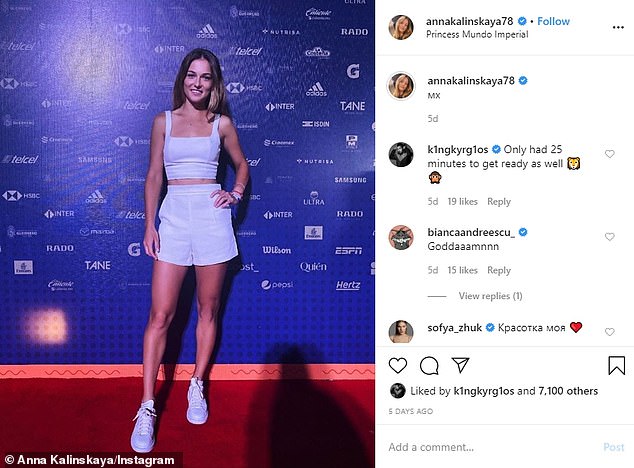 Kyrgios was spotted commenting on his girlfriend’s Instagram post at a red carpet event in Acapulco, saying she ‘only had 25 minutes to get ready as well’

The star had retired from the ATP World Tour first-round match in Acapulco due to an injured wrist.

Kyrgios was booed by the crowd after pulling out after just one set and 32 minutes.

He was also spotted commenting on one of her Instagram posts when she attended a red carpet event in Acapulco, saying she ‘only had 25 minutes to get ready as well’.

Last year, Tomljanović sparked rumours she was dating another tennis player – Italian Matteo Berrettini – after being spotted watching his US Open fourth-round match and being photographed with him at a restaurant in New York. 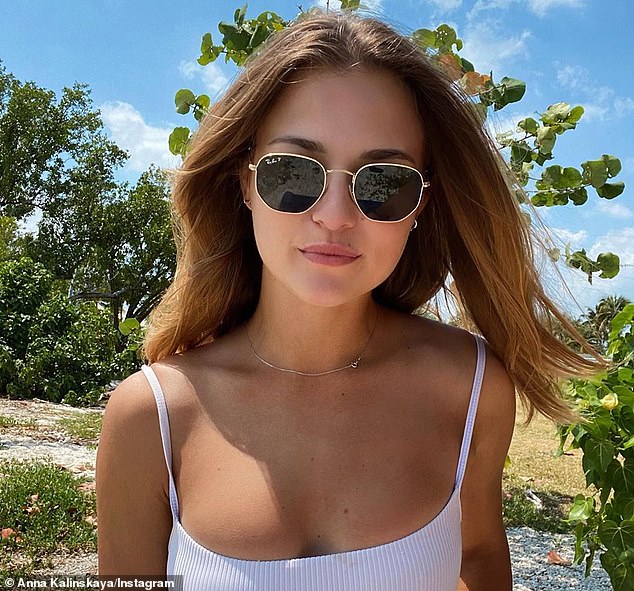 Anna Kalinskaya, 21, (pictured) is thought to have dated the Australian tennis star since last August 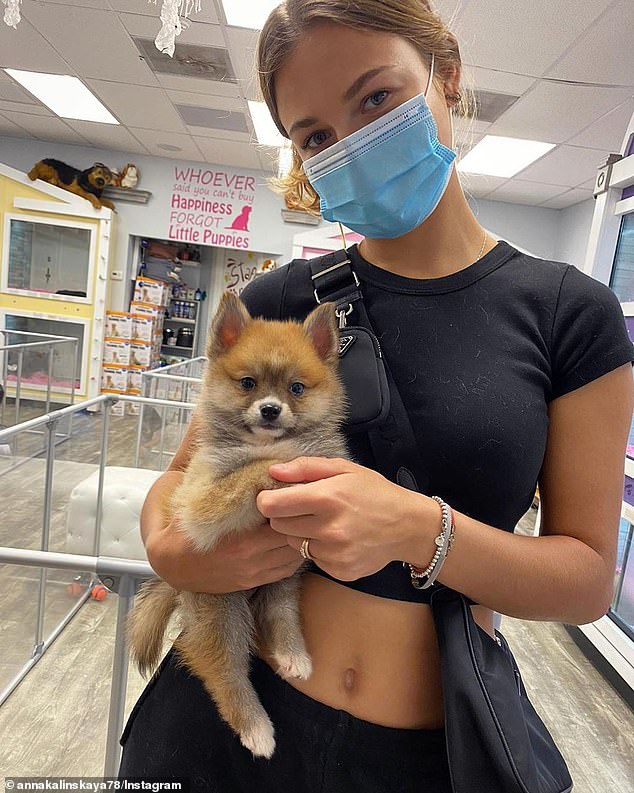 Ms Kalinskaya (pictured) recently posted this photo of her new dog, having broken up with the Australian tennis star