Nicolas Cage flirts with woman before her husband shows up

Nicolas Cage found himself smitten with a beautiful woman at a sushi restaurant this week, but their flirtation quickly came to a halt when her husband showed up.

The 53-year-old actor was dining with Back to the Future star Crispin Glover at Sushi Gen in Los Angeles on Tuesday when he struck up a conversation with an attractive stranger at the sushi bar.

Nicolas was catching up with his former co-star over sushi, sake, and beer before he turned his attention over to the woman and introduced himself as Nicolas Cage.

Feeling flirting: Nicolas Cage was photographed striking up a conversation with a woman who sat next to him at Sushi Gen in Los Angeles on Tuesday 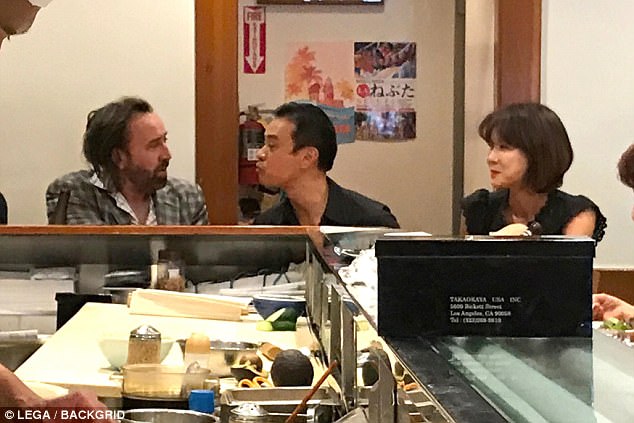 Three’s a crowd: The brief flirtation came to an end when the woman’s husband showed up and sat down next to her 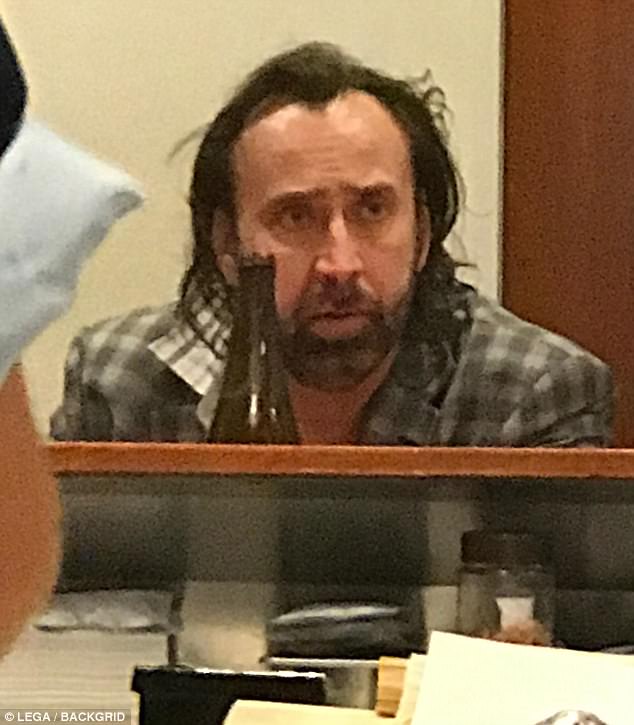 Strike out: The 53-year-old looked a bit dejected after the woman’s husband showed up

The National Treasure star was photographed reaching over and shaking the unknown’s woman hand, and she looked surprised to be chatting with the A-lister.

Nicolas, who was wearing a plaid button-up shirt and a contrasting plaid blazer, appeared to be flirting with the diner, who was sitting a few seats away from him.

At one point, he was photographed with his hand on his chest as he looked intently at the woman.

However, much to Nicolas’ dismay, the conversation came to an end when the woman’s husband arrived at the sushi restaurant and sat down between her and the actor. 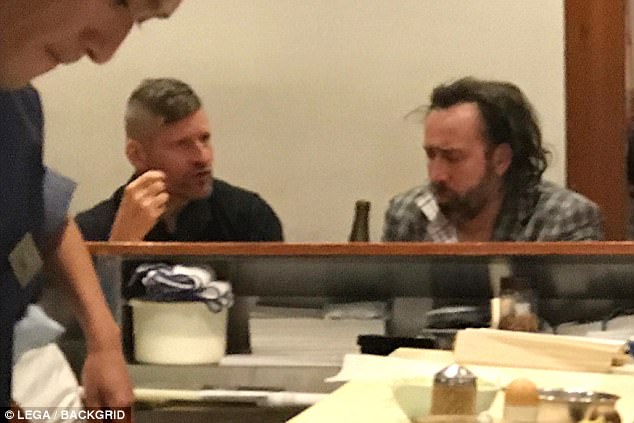 Old friends: Nicolas was at the restaurant with Back to the Future star Crispin Glover 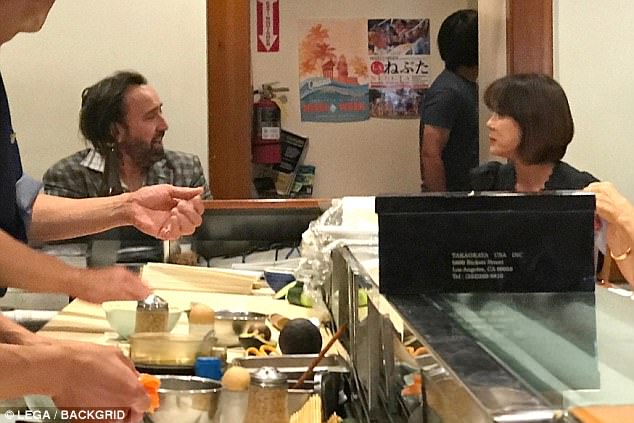 How you doing? Nicolas was enjoying some sushi, sake, and beer when turned his attention over to the unknown woman 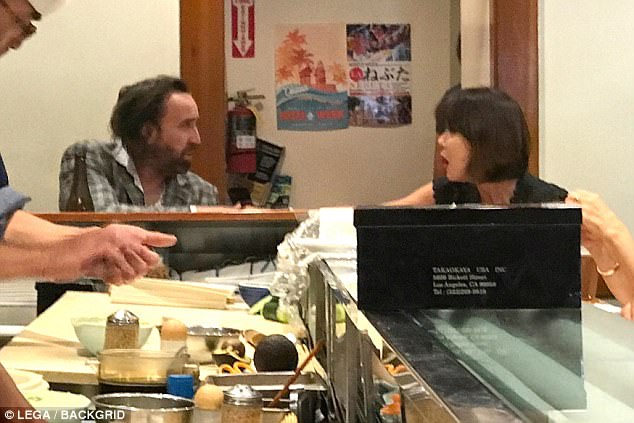 Charmer: The actor reached over and shook her hand, introducing himself as Nicolas Cage 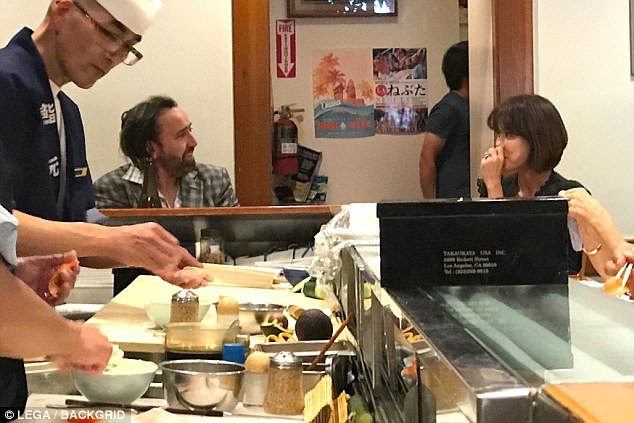 Getting to know each other: The woman looked surprised to be finding herself chatting with an A-lister

The woman’s husband didn’t look pleased with the situation, and he appeared to be glaring at Nicolas after he sat down.

Nicolas looked a bit embarrassed when the flirtation came to a halt, and he went back to enjoying his meal with Crispin, who seemed to find the awkward situation amusing.

When they finished their meal, Nicolas gave a wave and walked out of the restaurant while the woman’s husband watched him as he left.

Nicolas, who is believed to be single, split with his third wife, Alice Kim, in January 2016 after 11 of years of marriage. 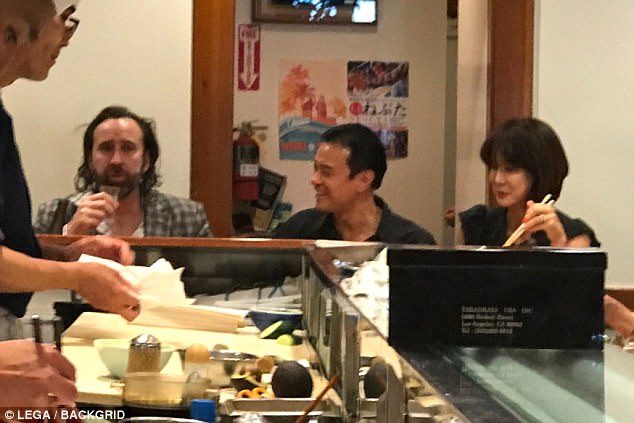 Whoops! The woman’s husband eventually put an end to the conversation when he joined his wife at the restaurant 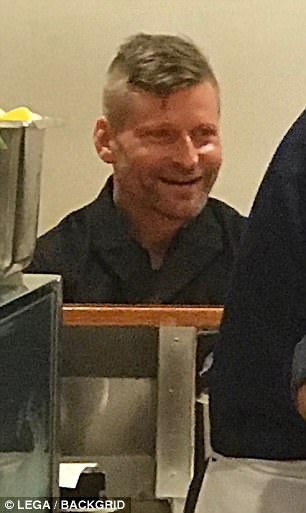 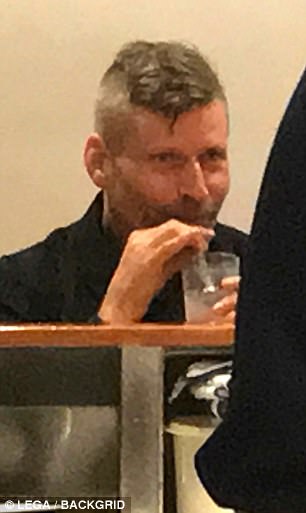 Laughing it off: Crispin seemed to find the awkward situation a bit amusing 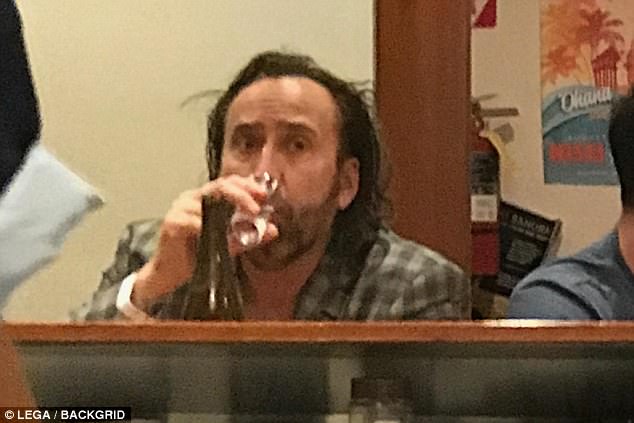 Enjoying himself: Nicolas appeared to drinking sake before he started talking to the woman 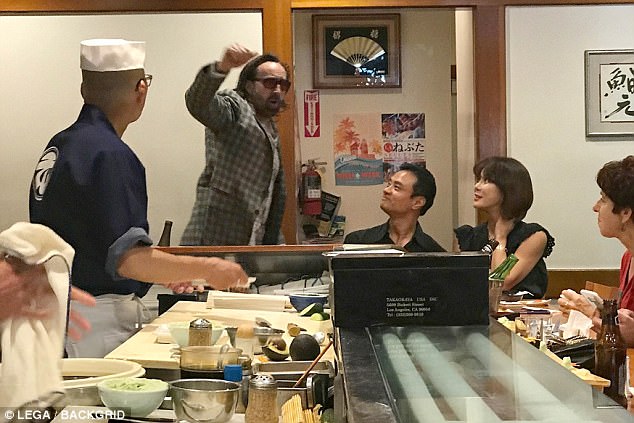 Heading out: Nicolas gave a wave as he left the restaurant and walked past the couple

They met in 2004, when she was just 19 and working as a waitress at a Los Angeles restaurant, and the pair got engaged two months later despite their 20-year age gap.

Nicolas and Alice, 33, have an 11-year-old son, Kal-el Coppola Cage, together, and he previously admitted his Korean mother-in-law was unimpressed when she first met him.

‘When my mother-in-law came to the house for the first time, before even hello or nice to meet you, all I got was, “She’s too young!” And so I knew this was going to be an uphill battle,’ he said. 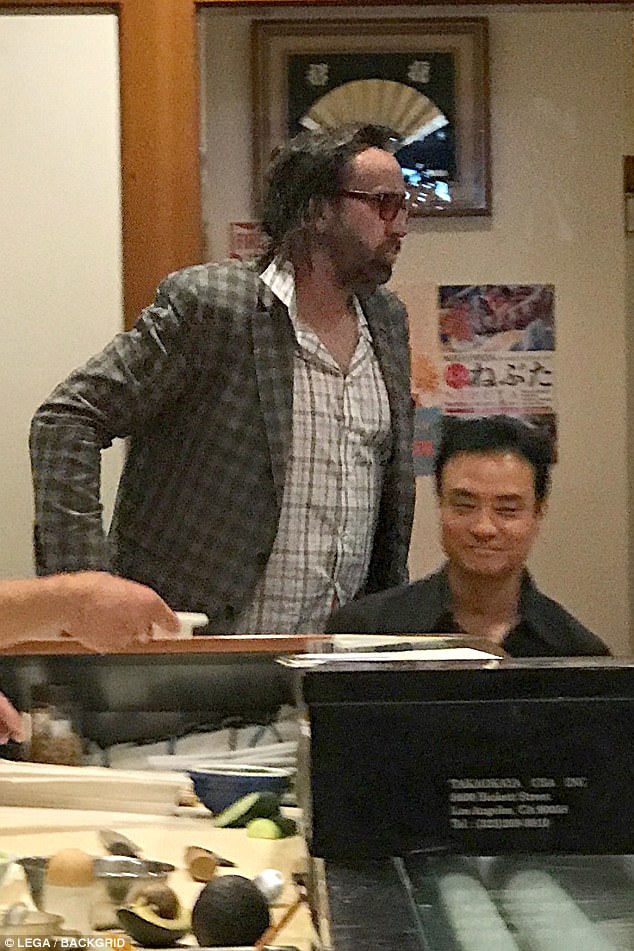 Mixing patterns: The National Treasure star was wearing a plaid button-up shirt under a plaid blazer 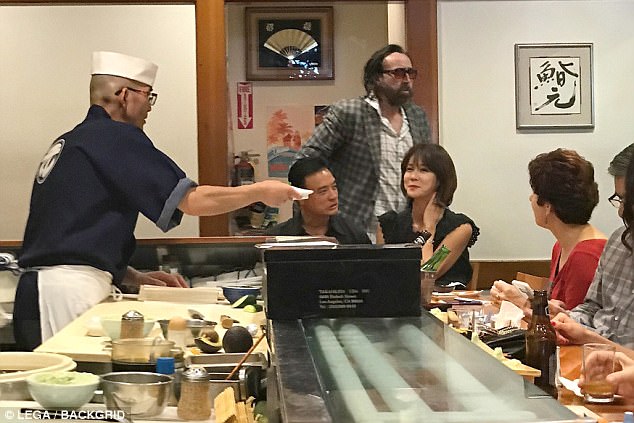 Flirting fail: The man seemed to be giving his wife a look as Nicolas headed out the door 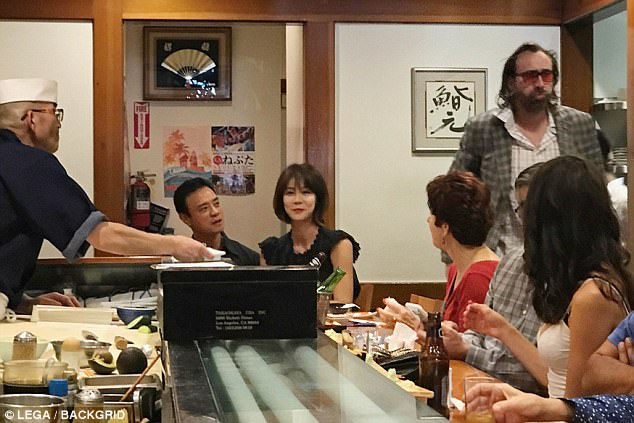 Glaring: The man watched Nicolas as he walked out of the crowded restaurant 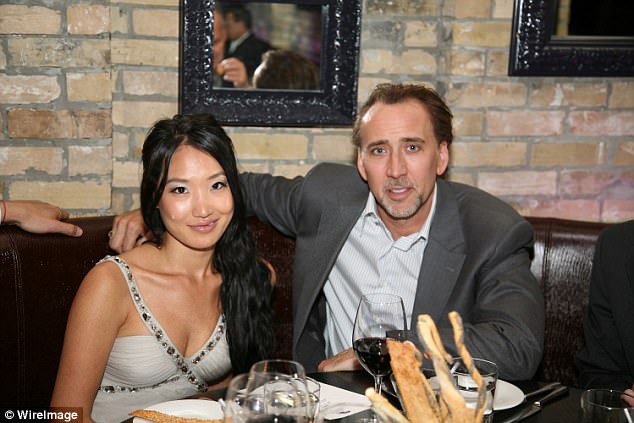 Moving on: Nicolas is believed to be single after he and his third wife, Alice Kim, split in January 2016 after 11 of years of marriage. They are pictured in 2009

Nicolas added that he made a point to be with someone from another culture, saying: ‘I made a very clear decision to marry out of my own zip code.

‘I mean, way out of my own zip code. I married into another culture, and it’s interesting because in Korea they call me the Son-in-Law.’

He revealed the couple’s wedding was pushed forward so that Alice could travel with him to South Africa while he was making Lord Of War, explaining: ‘You can connect the dots… and we did it because we loved each other.’

The Con Air actor was previously married to Lisa Marie Presley for almost four months in 2002 and to Patricia Arquette from 1995 to 2001.

He also has a 26-year-old son, Weston Coppola Cage, from a previous relationship with model Christina Fulton.