Nicolas Maduro ‘will sell $640million of Venezuelan gold to the UAE’

Venezuela will fly 15 tonnes of gold to the United Arab Emirates in coming days in return for euros in cash as the country tries to stay solvent, sources have said.

In total, Nicolas Maduro plans to sell 29 tonnes of Venezuelan gold – worth around $1.2billion – to the UAE by February in order to buy basic goods and prop up his crumbling government.

Meanwhile Russia, which is backing Maduro, was forced to deny being in contact with opponent Juan Guaido after the politician said he sent a message to Moscow.

Nicolas Maduro is planning to sell a total of 29 tons of Venezuelan gold to the UAE, with the first 15-tonne shipment worth $640million due to leave in the coming days, sources say 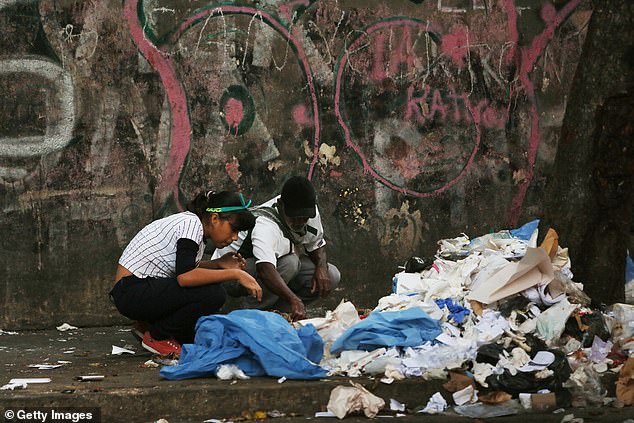 Maduro will then use the resulting cash to buy basic supplies as it struggles to feed its population (pictured, people hunt through rubbish in Caracas on Thursday) 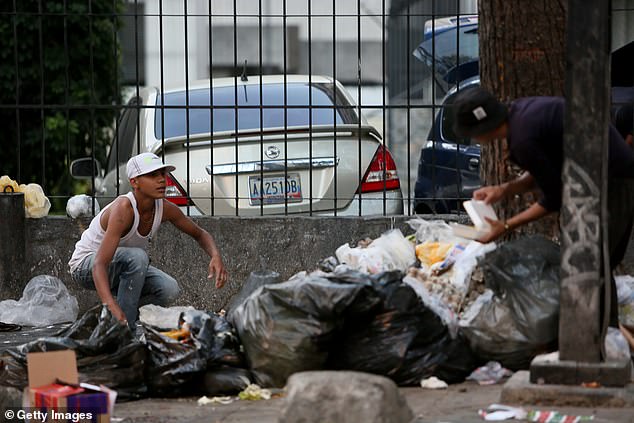 Venezuela’s economy has fallen apart under Maduro’s leadership, thanks to dwindling oil production and a fall in the price of crude 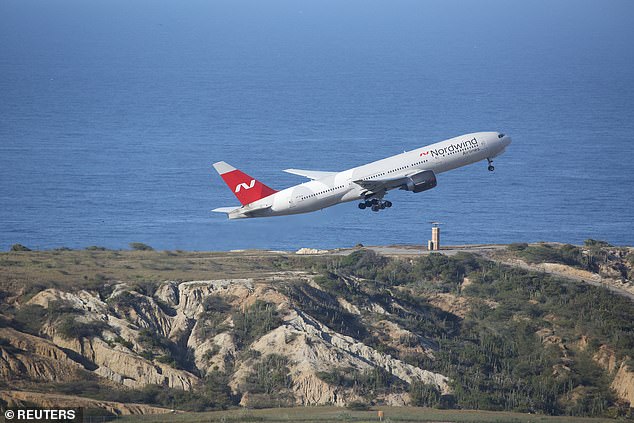 Kremlin spokesman Dmitry Peskov said: ‘We have not received any messages yet. If or when we receive it, we will review it.’

Republican Senator Marco Rubio sent a tweet to the United Arab Emirates embassy in Washington on Thursday warning that anybody transporting Venezuelan gold would be subject to U.S. sanctions.

Maduro is known to have sold three tonnes of gold so far this year, and last year exported some $900million in unrefined gold to Turkey.

The gold reserves are used to underpin Venezuela’s currency, the bolivar, which has been plagued by hyper-inflation of up to 2million per cent in recent years.

Maduro is under intense pressure to step down, with Venezuela in deep economic crisis and the government facing widespread international condemnation for elections last year seen as fraudulent.

Venezuela had gold reserves of 132 tonnes between the central bank’s vaults and the Bank of England at the end of November, according to central bank data.

But Britain has frozen Maduro out of the estimated $1.2billion in gold being held in London after Guaido pleaded with them to stop Venezuela’s national assets being stripped away. 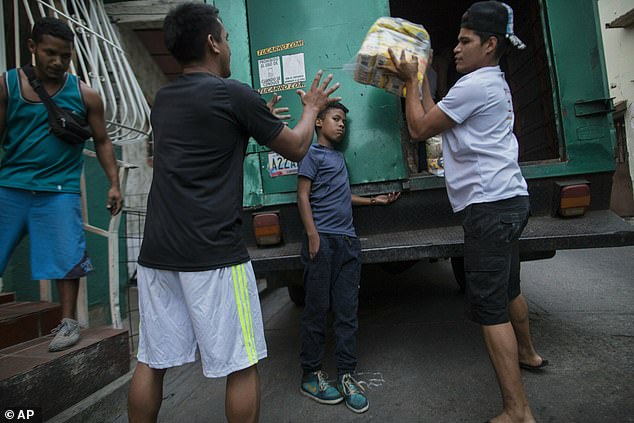 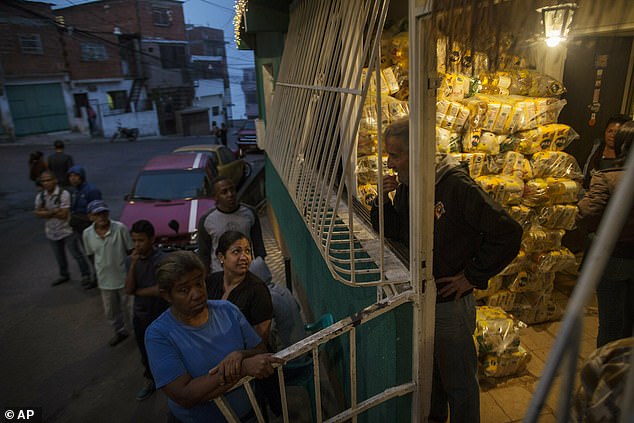 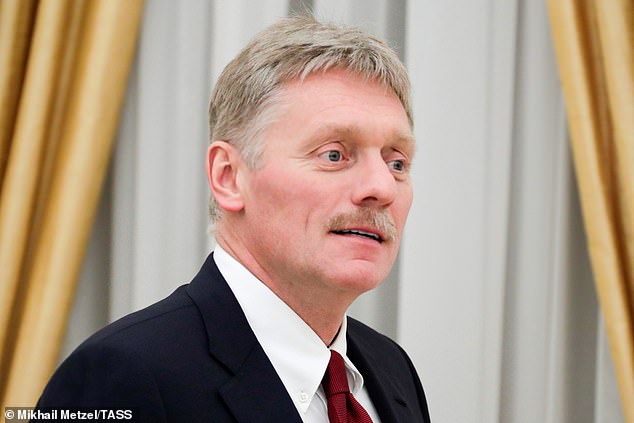 Dmitry Peskov, spokesman for the Kremlin, has denied having any contact with Juan Guaido after Maduro’s opponent said he said a message to Moscow

Maduro’s government resorted to selling off gold about a year ago after falling oil production, the country’s wider economic collapse and mounting U.S. sanctions hit public income and made it hard for the country to access credit.

The sale of large volumes of the reserves underpinning the currency is a significant escalation that countries only generally resort to in the most dire financial straits.

The European Union piled pressure on Maduro on Thursday night after voting to recognise Guaido as the legitimate ruler, having previously been calling for fresh elections.

Members of the European Parliament, the bloc’s legislative arm, voted 439 to 104 in favor of the move, which was hailed by Gauido.

He repeated calls for the bloc to help Venezuela secure its assets and provide aid to its starving citizens.

All western nations now back Guaido, while Maduro has the support of Russia, China, India, Iran, Turkey and Syria – among others.

Guaido spoke out after earlier accusing Maduro of sending feared special police forces to his family home, where they interrogated his elderly mother and his 20-month-old daughter. 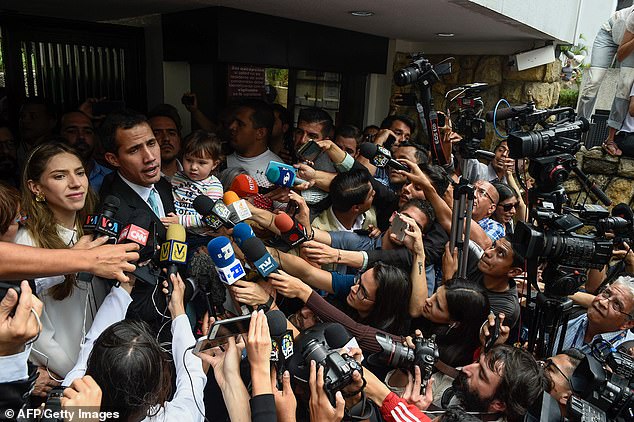 Elswhere, Guaido claimed on Thursday that Maduro’s secret police had raided his family home and intimidated his mother and his 20-month-old daughter 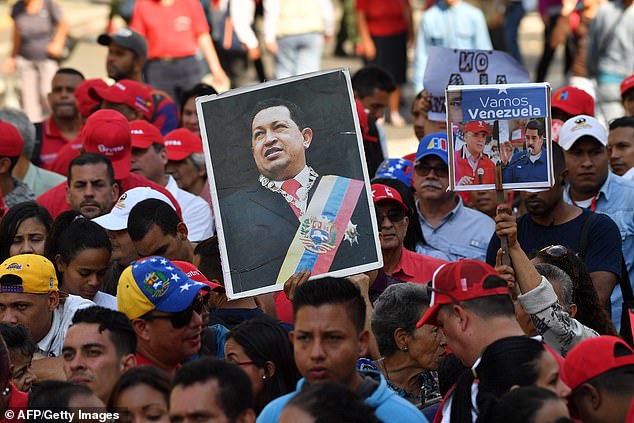 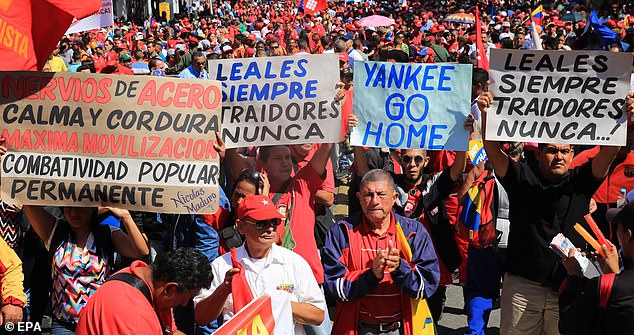 While Maduro has thousands of supporters in Venezuela still (pictured), he is becoming increasingly isolated both at home and abroad

Guaido and his wife, Fabiana Rosales, were not at home at the time.

‘At this moment the FAES is in my home, in my family home. I’ll hold citizen Nicolas Maduro as responsible for the integrity of my daughter who is there,’ Guaido tweeted Thursday afternoon.

Neighbors said the officers – who hailed from the Special Action Forces – arrived to the gate of Guaido’s apartment building in a white SUV.

Angry neighbors and passerby immediately rushed to the apartment building banging pots and pans until the police officers left.

He later delivered a speech in which he blasted: ‘The dictatorship thinks it can intimidate us.’

Maduro first took power in 2013 but has sparked outrage and protest in the country after Venezuela’s economy collapsed and was followed by hyperinflation and food shortages, leading to a massive exodus of 3million Venezuelans to flee the country.

At stake is also the world’s largest oil reserves, which are held by Venezuela.