Nigel Farage praises a Tory manifesto he can finally approve of

Nigel Farage today praised the Tory manifesto as one that he can finally approve of as he claimed half of its policies were first mooted by his former party Ukip.

The Brexit Party leader was on the campaign trail in Country Durham today when he said the Conservatives had followed his former party’s lead.

Farage said that he was happy to see the Tories ‘changing the agenda’ by talking about immigration levels as Boris Johnson also promised not to extend the implementation period as Britain leaves the EU. 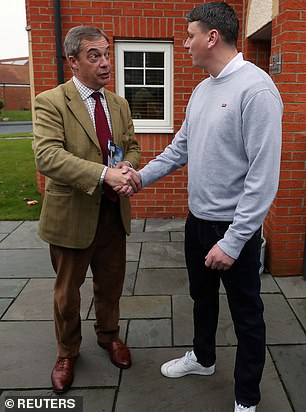 Farage (pictured, left, on a bus in Easington and, right, campaigning in Seaham) today took the credit for key policies in the Tory manifesto 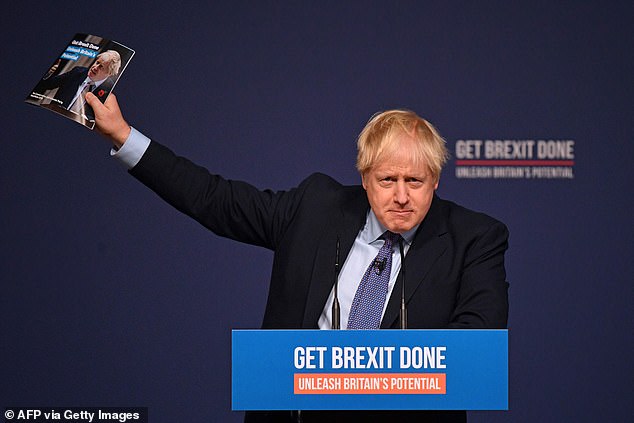 ‘I recognise much of the Conservative manifesto because they’re things that I have campaigned on for years, such as hospital parking charges.

‘Much of the manifesto was in fact in the Ukip 2015 manifesto, even recent ideas that I’ve announced like not exporting plastic waste for dumping in landfill in China or elsewhere, that’s in there.

‘So, I’m pleased that they are changing the agenda. They’re even talking, maybe, about reducing immigration levels and of course Brexit.

‘So, I do feel that I recognise a lot of it. My question is, do they mean it and are they going to deliver?’

Boris Johnson today vowed not to extend the Brexit transition period beyond 2020 – as the Tories committed to having trade deals in place with a slew of countries within three years.

The party’s election manifesto flatly ruled out delaying the formal end of the implementation phase.

The promise was a key factor in convincing Nigel Farage to stand down hundreds of his Brexit Party candidates, boosting Mr Johnson’s chances of winning a majority.

But there are warnings it will be impossible to get a new EU trade deal done in time for the deadline.

The manifesto also says the Conservatives will pursue an ‘ambitious’ programme of agreements outside of Europe.

‘We aim to have 80 per cent of UK trade covered by free trade agreements within the next three years, starting with the USA, Australia, New Zealand and Japan,’ the document insisted. ‘These will be negotiated in parallel with our EU deal.

‘We will also forge stronger links with the Commonwealth, which boasts some of the world’s most dynamic economies such as India, with which we already share deep historical and cultural connections.’

On the subject of the transition period, the manifesto says: ‘We will negotiate a trade agreement next year – one that will strengthen our Union – and we will not extend the implementation period beyond December 2020.’

Mr Farage welcomed the manifesto today, saying it was full of ‘things that I have campaigned on for years’. 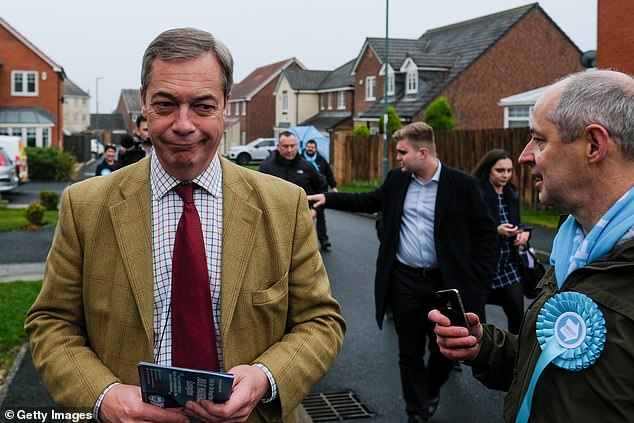 The promise not to extend the Brexit transition was a key factor in convincing Nigel Farage (pictured in County Durham today) to stand down hundreds candidates, boosting Boris Johnson’s chances of winning a majority

The former Ukip leader was on the campaign trail in County Durham this afternooon. He arrived alongside Julie Maughan, who is bidding to win the Easington constituency for the Brexit Party in next month’s election.

Mr Farage, who wore a flat cap and a long brown coat, paid a visit to the Hat and Feathers pub and while there he posed with voters and enjoyed some ‘delicious’ Doom Bar amber ale.

Mr Farage also said he is concerned that Boris Johnson’s plan to bring the Withdrawal Agreement back before Christmas could lead to ‘Brexit in name only’. 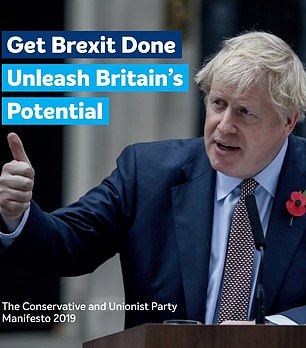 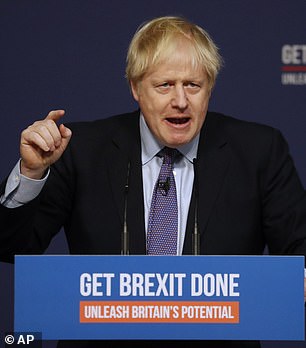 The Tory manifesto (left) was a safety-first affair, with the party riding high in the polls

He said: ‘I want to get Brexit done, as does the country. Not just Brexit voters but now a large chunk of Remain voters just want this over and done with.

Mr Farage added: ‘If he’s going to pass the Withdrawal Agreement between now and Christmas, which is what Boris is talking about today, then it’s going to have to have some amendments, because if we’re tied into regulatory and political alignment, it’s Brexit in name only.’