Nigel Lawson calls for Philip Hammond to be sacked

Philip Hammond’s position as Chancellor came under fresh pressure today after a Tory grandee called for him to be sacked for his gloomy Brexit warnings.

Former Chancellor Nigel Lawson said Mr Hammond’s predictions are ‘very close to sabotage’ and that he should be axed from the Cabinet.

Meanwhile, a business chief accused him of being too ‘negative’ while even Mr Hammond’s aide admitted he has a ‘temperament’ problem.

The Chancellor has been branded an ‘Eeyore’ and accused of talking Britain down after he made a series of gloomy predictions about Brexit.

He was slapped down by the Prime Minister yesterday for saying he would refuse to spend money to prepare Britain for a ‘no deal’ option until the very last moment.

Asked whether he should remain as Chancellor, Lord Lawson told BBC2’s Daily Politics: ‘I fear not. I fear that he is unhelpful.

‘He may not intend it but in practice what he is doing is very close to sabotage.’

Mr Dolman, who is also an executive at Rolls-Royce, said a deal between the EU and the UK was in the ‘best interest’ of both sides.

Asked about the Chancellor’s approach, he told BBC Radio 4’s Today programme: ‘I think he is probably speaking a little negatively. I think we need to positive about this.

Yesterday was not the first time the Chancellor has undermined the Prime Minister, or Brexit:

Within days of the referendum, Philip Hammond claims it could take six years to leave the EU.

He warns the Tory Party conference of a ‘roller coaster’ ride and ‘turbulence’ as Britain leaves the EU.

The Chancellor is slapped down by Mrs May for suggesting international students could be taken out of the Government’s net migration target.

He warns that Britain faces higher inflation, slower growth and ‘unprecedented uncertainty’ because of the Brexit vote.

Straying again from government policy, Mr Hammond says that leaving the EU without a deal is ‘ridiculous’.

The Chancellor warns businesses are not investing in the UK because they fear a ‘cliff edge’ Brexit.

He enrages Number 10 by claiming ‘literally nobody’ wants migration to fall sharply after Brexit.

While Mrs May is abroad, Mr Hammond announces the Brexit transition period will last three years.

He refuses four times to say Mrs May should fight the next election.

‘Businesses are resilient. They will be planning for eventualities. If there is a hard Brexit, then businesses will find a way around it.’

And Tory MP Kwasi Kwarteng, an aide to the Chancellor, admitted Mr Hammond has a ‘temperament’ issue which can make him appear gloomy.

He told the BBC Radio 4’s Today Programme: ‘A lot of it is an issue of temperament. He is someone who is very clear-eyed, he has a very clear view intellectually of where we are.

‘He is not going to exaggerate possibilities or diminish some of the challenges.

‘Temperamentally he has got a very realistic view of where we are and he’s got the intellectual honesty to describe what he sees and I think that’s the best we can expect.’

The Prime Minister’s spokesman today attempted to bat off questions about tensions between the No10 and No11.

Asked whether Mrs May would agree with characterisations of Mr Hammond as an ‘Eeyore’ figure, the spokesman said: ‘The Prime Minister thinks the Chancellor and the Cabinet are working well together in all areas and on securing that smooth Brexit which everybody wants to see and is in the interests of the UK and the EU.

‘We will spend whatever is necessary to make Brexit a success and that includes planning for a no-deal scenario.’

Relations between Mrs May and her Chancellor were plunged into the deep freeze last night.

The Prime Minister dramatically slapped her Chancellor down after he undermined her Brexit strategy.

Mr Hammond had said he was not ready to release the billions of pounds needed to prepare for leaving the EU without a deal. He also insisted any spending should be delayed until the last possible moment.

His stance contradicts Mrs May’s attempt to convince Brussels that Britain is ready to walk away if trade talks are dragged out. Mr Hammond also risked angering Eurosceptic MPs who have rallied round the Prime Minister after a difficult fortnight. 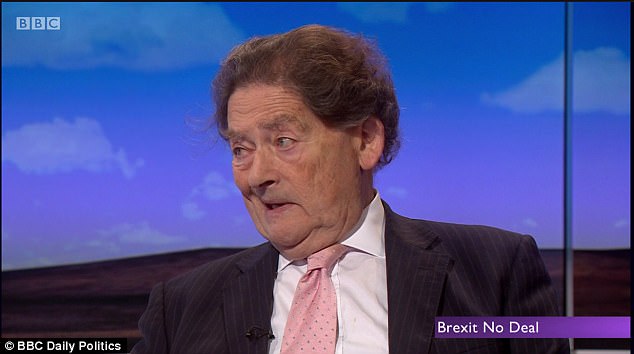 In the Commons yesterday, Mrs May directly contradicted her Chancellor, saying: ‘Where money needs to be spent, it will be spent.’

The pair sat side by side on the front bench for the 45 minutes of Prime Minister’s Questions yesterday but barely exchanged a word.

Mrs May revealed the Government had signed off an extra £250million for Brexit preparations this year, including money for ‘no deal’ contingency plans.

And she said the Treasury would be writing to ministries to release further cash for measures such as border controls.

The row, which sparked fresh talk that the Chancellor could be sacked in an autumn reshuffle, came as: 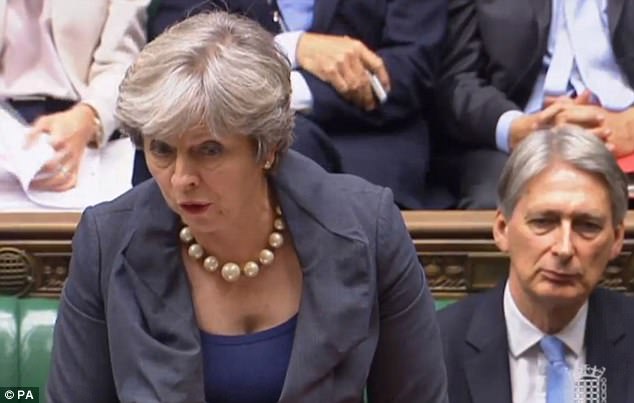