Portrays herself as a humble mother-of-four but in fact is a friend of Lady Kitty Spencer, Princess Diana’s niece.

She is married to a wealthy private equity specialist and attends polo tournaments.

Claims she is an actress but has an empty page on IMDB, the online guide for film and TV content.

Currently studying for a master’s degree in EU law, she once said she wants to bring ‘love and peace’ to the pro-Brexit campaign.

One-time editor of the lads’ magazine Loaded, he prided himself on its anti-feminist agenda.

A coal-miner’s son who says: ‘I hate people who go to dinner parties.’ 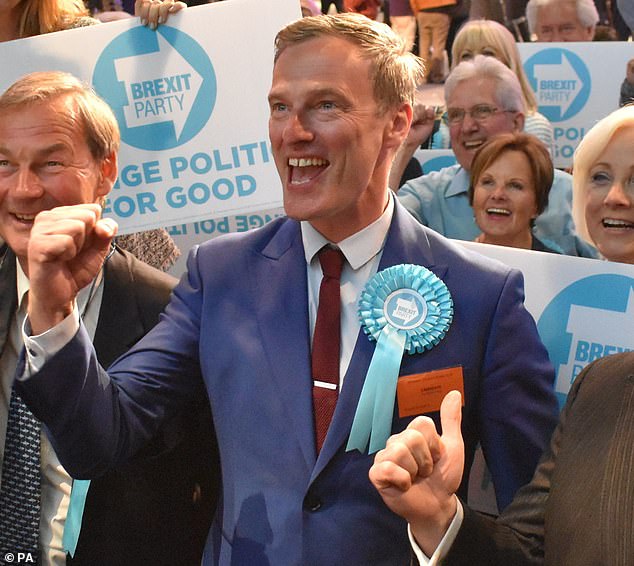 Former boss of Asda and Tesco who was forced to stand down as director general of the British Chambers of Commerce for backing Brexit. 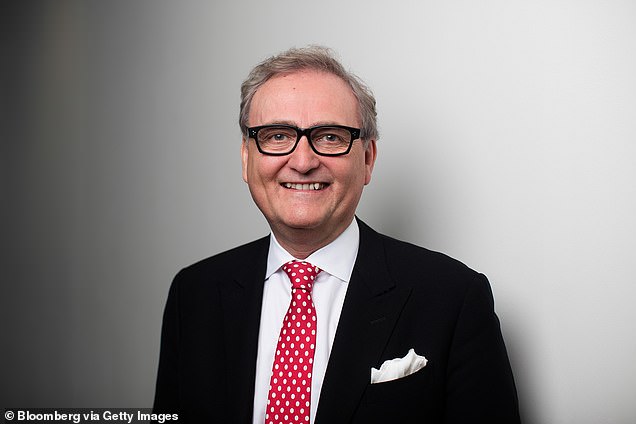 As a captain in the Royal Marines and in the elite Special Boat Service, he did three combat tours in Afghanistan and was awarded the second highest military medal, the Conspicuous Gallantry Cross, for leadership and bravery.

Runs a conservation charity, Veterans 4 Wildlife, focusing on the preservation of African wildlife. 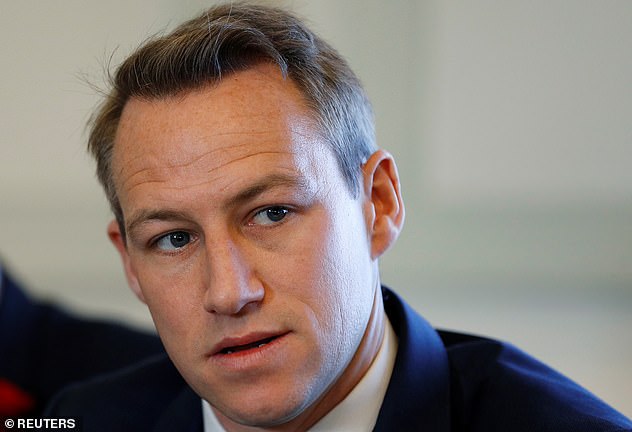 Jacob’s little sister previously lost in the 2010 General Election when she stood for Parliament as a Tory.

David Cameron urged her to ‘de-toff’ her name to ‘Nancy’ but she refused, preferring her birth name which refers to the Annunciation by the archangel Gabriel to the Virgin Mary of her impending motherhood.

Aged eight, she canvassed for the Tories, although she said her classmates disdained her blue rosette, wishing it was a Blue Peter badge. 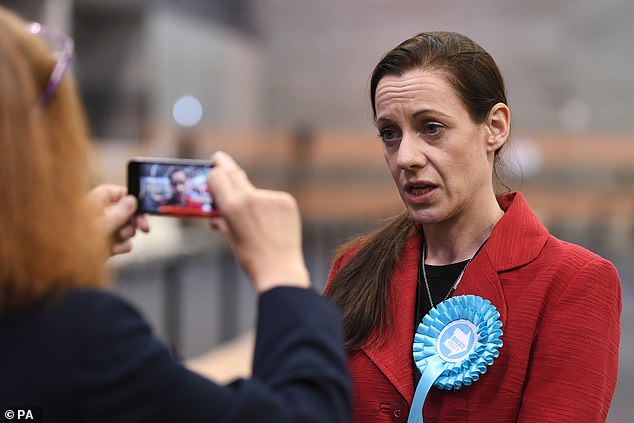 During the election campaign, Forman, the son of a Holocaust survivor, found a 30ft swastika sprayed on his east London business HQ. 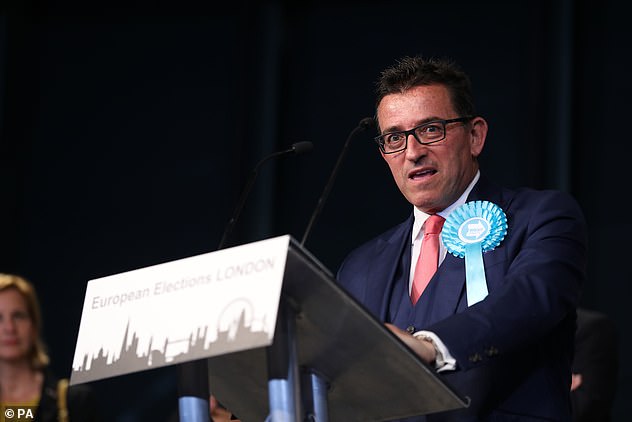 A former revolutionary communist elected in an area that includes Warrington where two boys were killed and 56 other people were injured by an IRA bomb in 1993 – an attack she won’t condemn.

A long-time panellist on Radio 4’s Moral Maze, she has said that child pornography should not be removed from the internet. 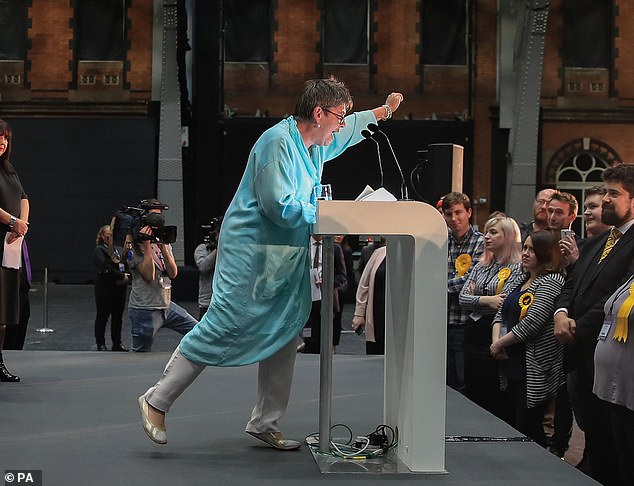 Says her singing is ‘a sign of a deeper ability to communicate’.

However, she has used less tuneful language in her campaigning, describing some Remainer critics as ‘cr*p’. 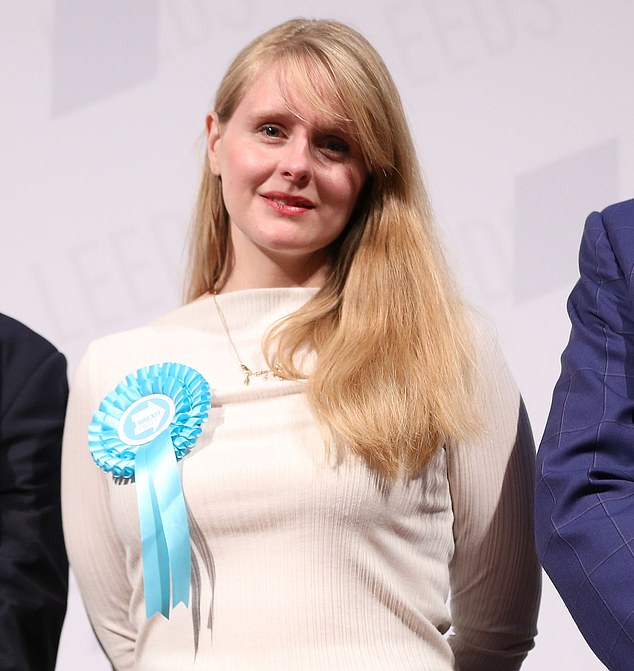 Boss of a Suffolk fish market auctioneers who likens herself to Boudica, the great warrior Queen who led a doomed British uprising against Roman rule. 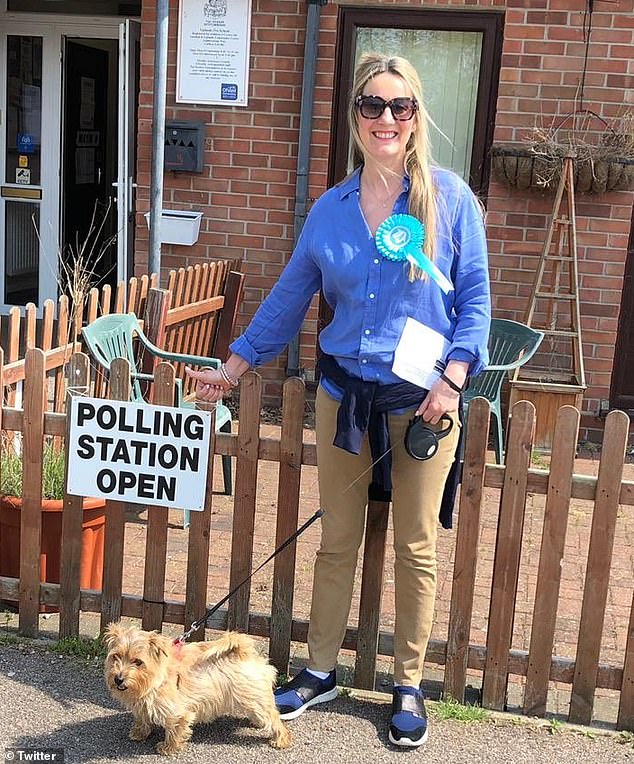 Defected from the Tories after 55 years of loyal party service.

A Catholic and cat-lover who at heart believes passionately that everyone should be given the best chance in life. 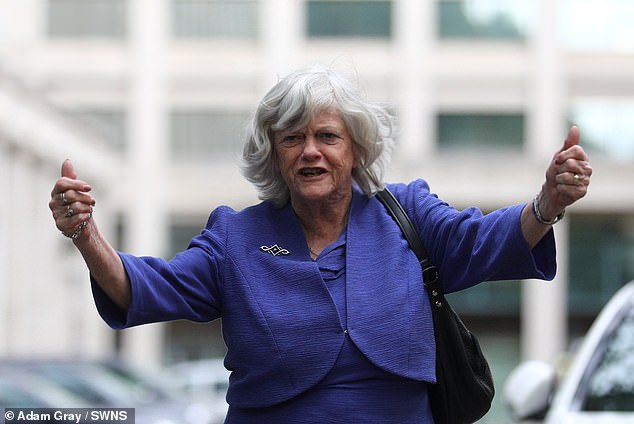 Once ran a care home company, employing staff mainly from Poland and the Philippines.

Denied this recruitment policy conflicted with the hardline stance on immigration of Ukip for which he was an MEP.

The firm collapsed after the 2008 banking crisis.

A climate change denier who says wind power is ‘completely stupid’. Has five children with his American wife, and they are Mormons. 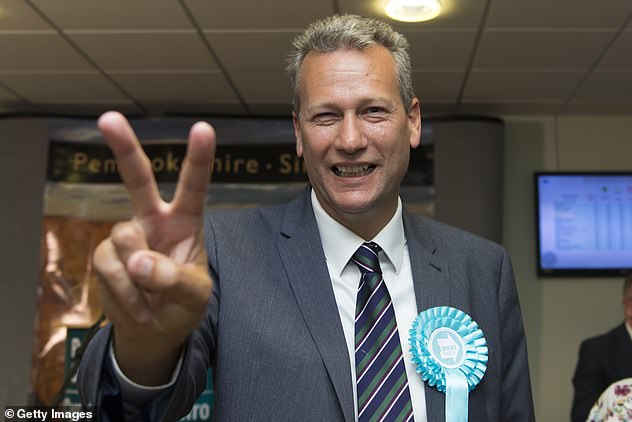 A Multi-millionaire property developer who has described the financial volatility surrounding Brexit as an opportunity.

The day after the EU referendum he said: ‘The pound would fall in value…our [company’s] income streams would go up. We are quids in.’ 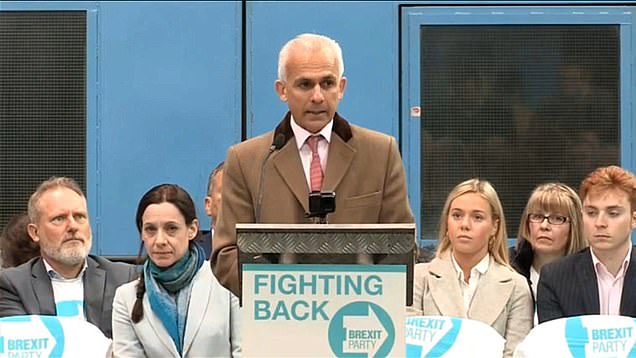 Former chief spokesman for Nigel Farage when they were with Ukip.

In 2015, Farage’s then wife was furious when she discovered Phillips on the sofa with her husband in the family home.

She and Farage denied a physical relationship.

In 2016, she defected to the Tories, saying she was hugely impressed by what Theresa May said about Brexit.

But then switched party again, to Farage’s new outfit. 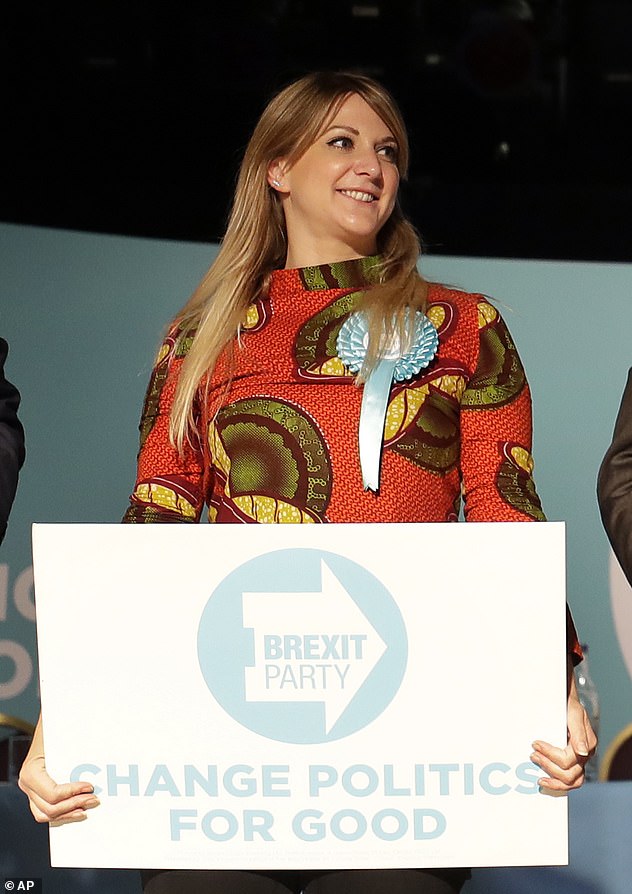 Former chairman of Southampton FC. Unpopular with many fans who said the only thing he knew was how not to run a football club.

In the 1997 General Election he stood for Jimmy Goldsmith’s Referendum Party.

He was a high-profile supporter of Vote Leave during the referendum. 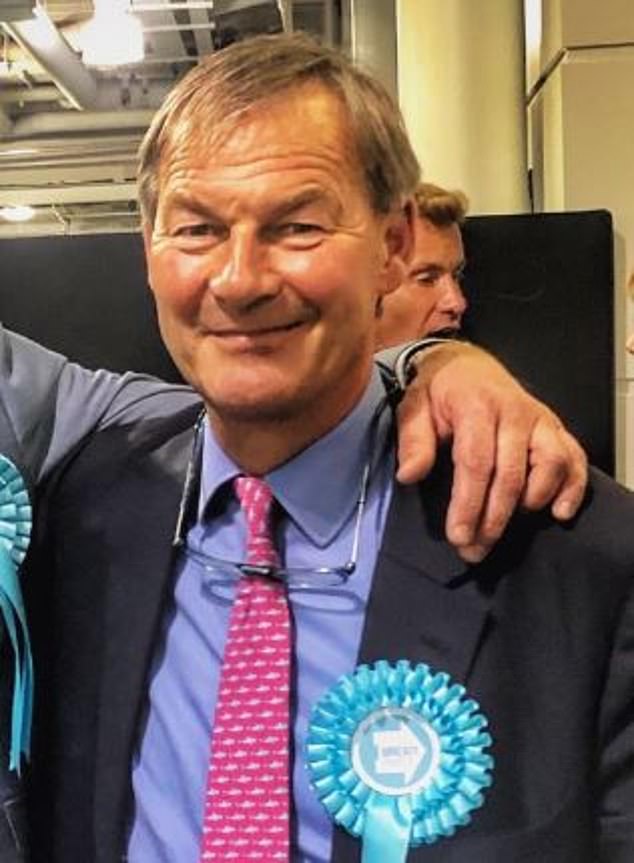 He added: ‘If we want to avoid extinction, extinguishing socialism in all its guises should be our priority.’

Dismisses criticism that he lives hundreds of miles from constituents, in France. 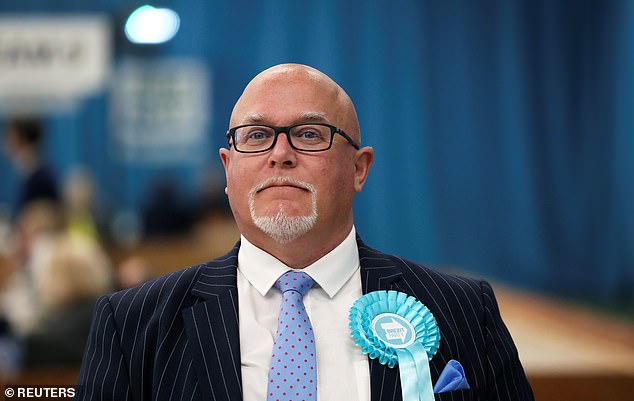 And here is the rest of the terrific 29…

Brexit Party chairman Richard Tice is a multi-millionaire property developer in charge of a £500 million portfolio.

He co-founded Leave.EU, which campaigned in the referendum, with Arron Banks.

Tice, 54, then founded Leave Means Leave to fight for a hard Brexit.

He regularly appears on TV and radio to make his case. He had been a loyal Tory backer, and was tipped to stand for them in next year’s election for London’s mayor. 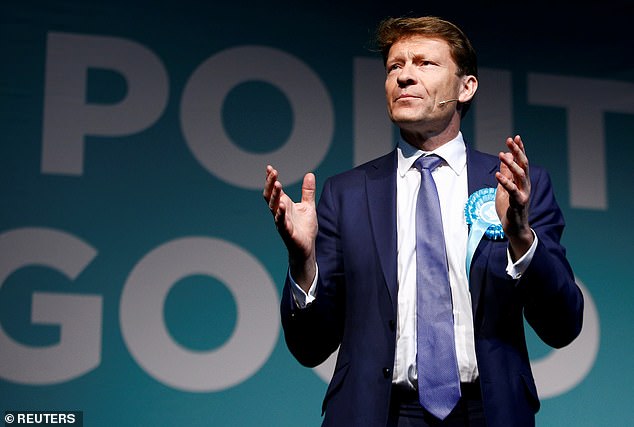 Louis Stedman-Bryce is the Brexit Party’s only Scottish MEP.

He said democracy was being ‘betrayed’ and as a gay black man he was ‘tired’ of the way Brexit voters were portrayed.

Mr Stedman Bryce said: ‘The perception is we are white, homophobic, racists, and don’t know what we voted for. So I stand before you today as a gay black man. And I definitely know what I was voting for. I voted for Brexit.’

He also appeared to break with Nigel Farage during the campaign and said he would not oppose a second Scottish independence referendum.

The care home director said: ‘If there was a demand for it, we are democrats, we believe in democracy, if the people said that is what they wanted then I don’t feel we would stand in their way. 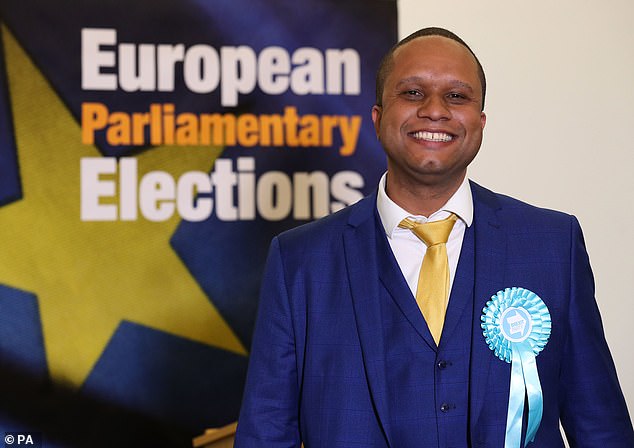 Matthew is an experienced business and charity director.

He has been Chief Executive of the Lord’s Taverners, Chief Executive at M&C Saatchi Sponsorship and Director of Communications for Clubs for Young People, working with over 400,000 disadvantaged young people. 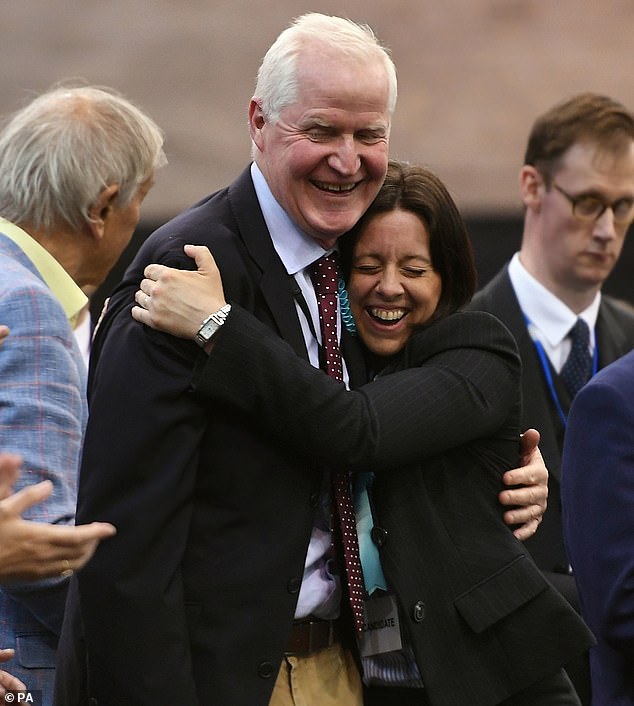 She came to the UK from Malaysia in 1985 after starting her career as a secretary at Turkish Embassy in Kuala Lumpur.

She completed her Registered General Nurse training at Winchester General Hospital and went on to work as a staff nurse.

Now she lives in Salisbury after a long career in nursing. 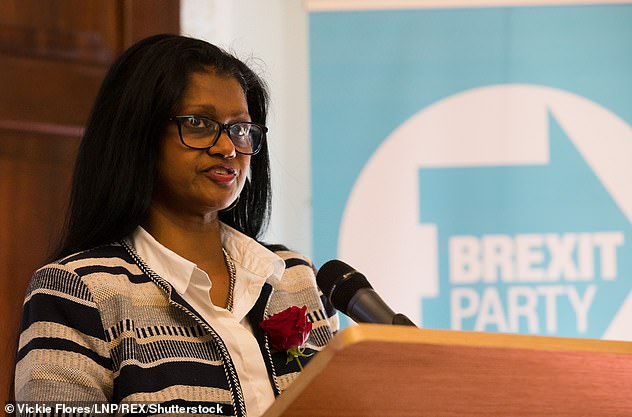 Henrik Overgaard-Nielsen, 59, a Danish national, who has lived in the UK for more than 20 years with his British wife and children.

He is an NHS dentist, senior trade union official and a socialist, who lives in London and is standing in the North West of England as a candidate.

Mr Overgaard-Nielsen said he was involved in the campaign in Denmark in 1992 to reject the Maastricht Treaty, which he said was then rejected by politicians in that country. 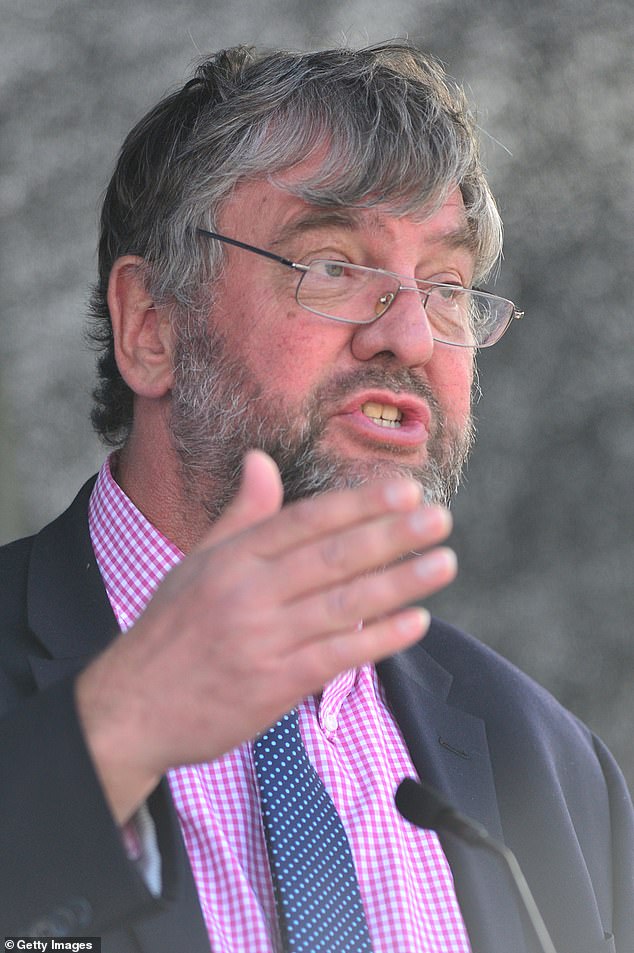 Ex A&E doctor David Bull was spotted by a modelling agency before transitioning into TV.

He appeared on Watchdog before moving to join Tomorrow’s world’ the prime time technology show.

In 2002 David launched the cult show Most Haunted Live, and hosted the world’s largest live ghost hunt, each show being a three hour unscripted live show.

He stood for the Tories in the 2009 election before joining the Brexit Party this year. 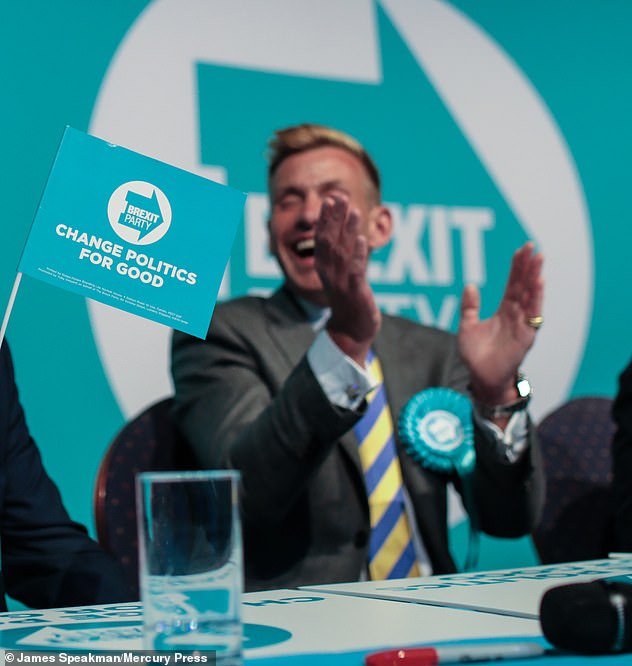 Robert Rowland was elected alongside Nigel Farage in the south-east.

He helped fund more than £15,000 for supporter Don MacNaughton, 81, who was covered in the strawberry drink by a ‘yob’ who spotted his Brexit Party rosette in Aldershot on Thursday.

An outpouring of public sympathy for the widower saw a crowd-funding effort to pay for his dry cleaning bill surge in popularity, and within hours donations were approaching £15,000.

Mr Rowland  explained: ‘It quickly snowballed into an incredible act of charity that gives you faith in the British public.

‘Don was also being offered cash by the great British public on the street, which he steadfastly declined.’ 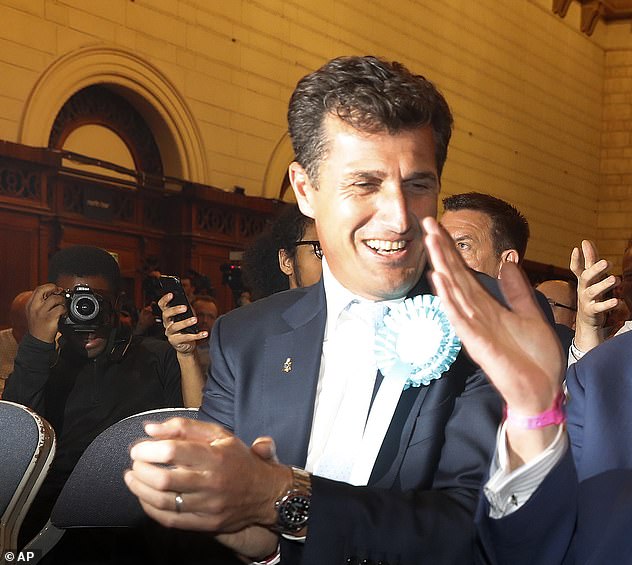 James Wells, who has been elected in Wales, was a civil servant banned from political involvement so resigned from his job as head of UK trade at the Office for National Statistics.

He left work for the last time on at 4pm and embarked on a campaign to become an MEP the following day.

‘It’s been a bit of a whirlwind,’ he said, but he could no longer go on ‘shouting at the TV’ as he believed ‘democratic values’ were being ‘trampled over’. 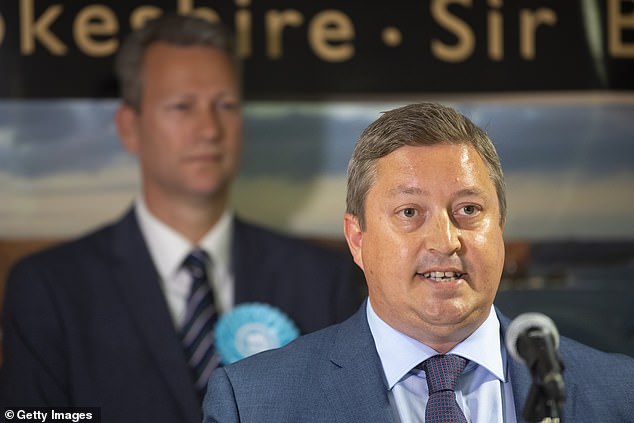 The newly-elected Brexit Party MEP tweeted: ‘Huge win here in East of England with 38% of the vote and 3 Brexit MEPs. The fight back starts now!’ 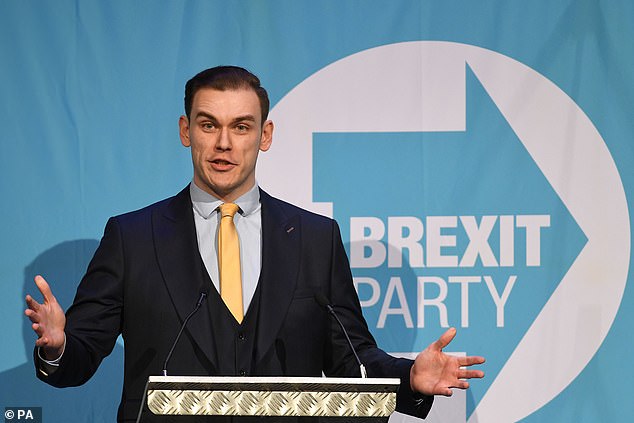 Former UKIP MEP Jonathan Bullock defected to the Brexit Party and is now an MEP in the East Midlands.

For the Conservative Party, Bullock fought the Parliamentary seats of Manchester Gorton in 1992 and Gedling in 2001 before standing in the 2004 European Parliament election in the East Midlands constituency. 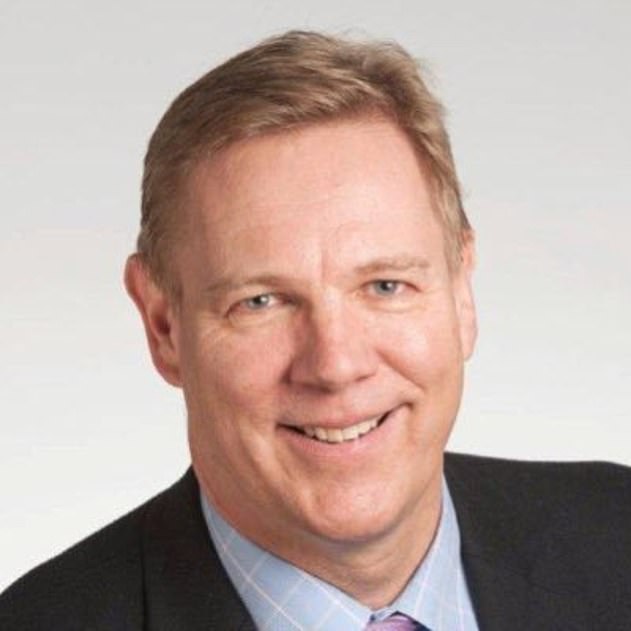 Andrew Kerr is a lawyer turned politician who was elected in the West Midlands yesterday.

He also runs a number of business, including an estate agency. 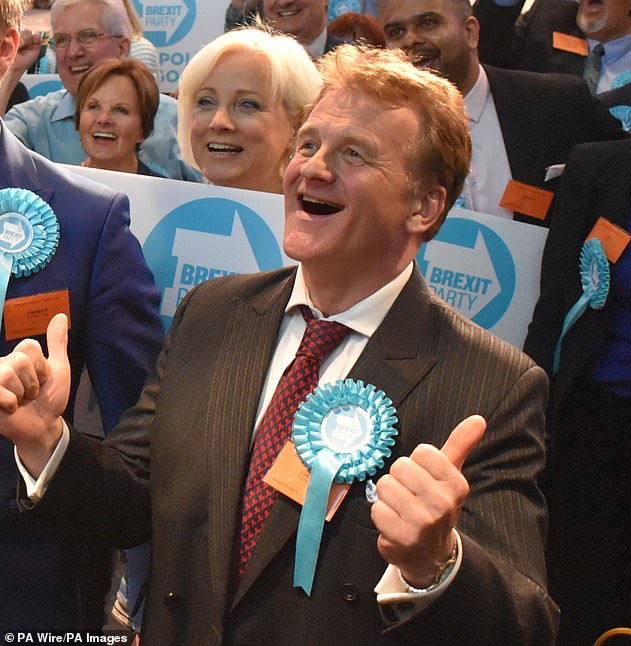 Jake Pugh has been elected to his first political post in Europe overnight as part of the Brexit Party’s big win.

He tweeted today: ‘Three more MEPs for the Brexit Party, taking half of the seats in Yorkshire and the Humber. Congratulations!’ 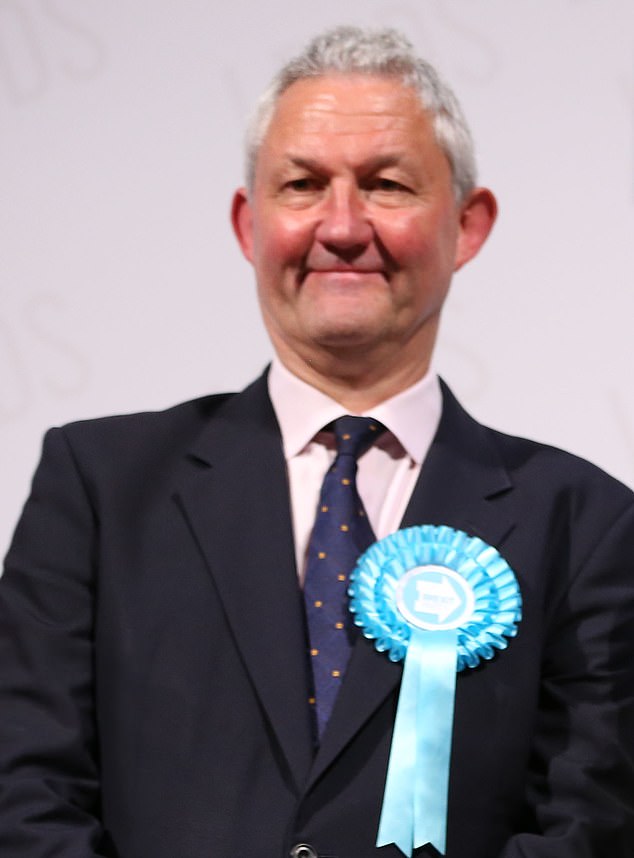 Before becoming an MEP, Gateshead-born Mr Tennant is a senior councillor on Hartlepool Borough Councillor, having been elected as an independent and formed a group called the Independent Union.

He has worked in Brussels and was considered to be close to Nigel Farage, helping him with his speaker schedule. 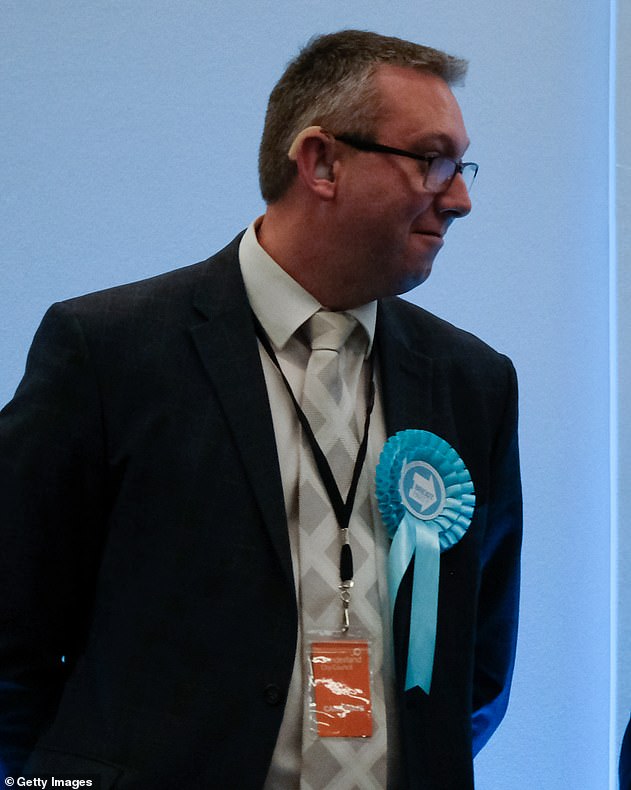 During nearly three decades in public life, Nigel Farage has risen from a eurosceptic rabble-rouser on the fringes of British politics to a pivotal player reshaping the country’s Brexit-dominated landscape.

Farage was a driving force behind the 2016 vote to quit the EU and the 55-year-old has now helped see off two prime ministers after scoring his third political victory in five years in the European Parliament polls held in Britain on Thursday.

The next step in his plan is ti find 650 candidates to stand in the next General Election. 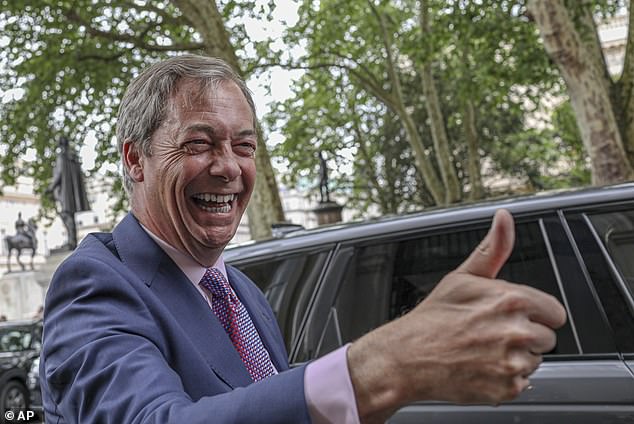