Witnesses said armed men opened fire on a crowd of more than 1,000 people who defied a curfew in Lagos which was imposed hours earlier because of the spiralling protests.

‘People were killed at the tollgate by security forces,’ Amnesty’s Nigeria spokesman Isa Sanusi said, referring to a key protest site in the city.

He said the rights group was ‘working on verifying how many’.

Anger over abuses by the police’s loathed Special Anti-Robbery Squad (SARS) erupted into protests two weeks ago that drew thousands onto the streets.

Rights groups have long accused SARS of of extortion, harassment, torture and murders, and many young protesters are demanding more sweeping reforms. 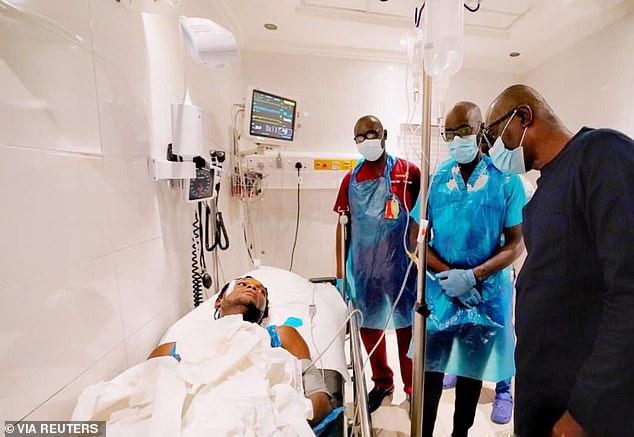 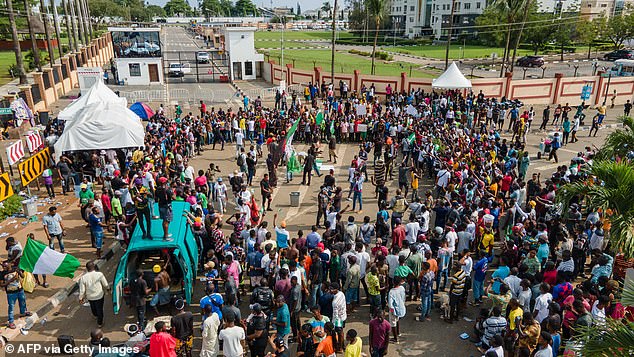 Amnesty said late on Tuesday that there was ‘credible but disturbing evidence’ that security forces had fatally shot protesters.

‘We were all sitting down, peacefully, and they shut down the lights and the billboards, everyone started screaming,’ a female protester called Toye said.

‘They came to us, but I don’t know who it was. They were shooting, and everyone was running for his life.’

Another protester, Innocent, said he was helping to ferry the wounded to nearby hospitals.

‘Currently I have two people that I rush in my car, a woman and a guy, who are in very critical conditions,’ he said.

Scenes of people removing a bullet from someone’s wound and pleading for help were broadcast in a live video by popular entertainer DJ Switch.

Lagos state governor Babajide Sanwo-Olu visited injured people in hospital after what he referred to as an ‘unfortunate shooting incident’. 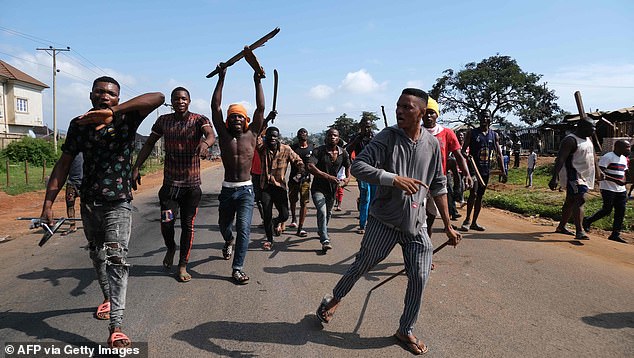 A group of young protesters chase after a rival group during clashes in Apo, Nigeria on Tuesday amid demonstrations against brutality by the country’s SARS police unit 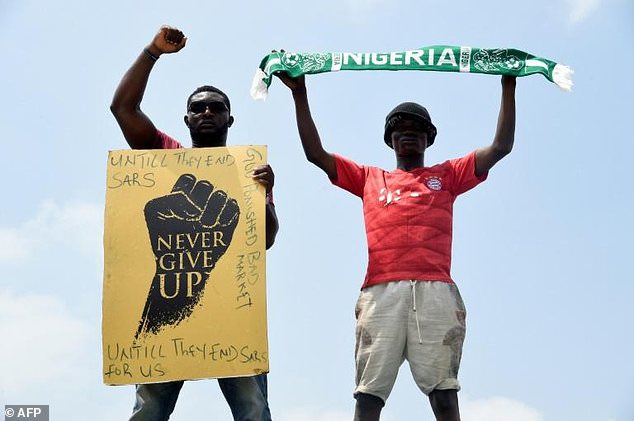 Odion Ighalo shared a video on social media as he branded the Nigerian government’s actions against protesters as ‘uncalled for’.

The Manchester United star, from Nigeria, spoke directly to camera as he called on other nations to express their support for the protesters.

He said: ‘I’m not the kind of guys that talks about politics but I can’t keep quiet anymore for what is going on back home in Nigeria.

‘I would say Nigeria government, you guys are a shame to the world for killing your own citizens, sending military to the streets to kill and harm protesters because they are protesting for their right is uncalled for.

‘Today 20th of October you people will be remembered in the history… I’m ashamed of this government, we are tired of you guys and we can’t take this anymore.’

Earlier defiant protesters at the scene had sung the national anthem and pledged to remain out on the streets despite the stay-at-home order.

Activists have accused ‘thugs and sponsored hoodlums’ of attacking the peaceful rallies and seeking to discredit the protest movement.

Governor Sanwo-Olu ordered the round-the-clock shutdown in the sprawling economic hub on Tuesday, claiming the protests had ‘degenerated into a monster’ as violence flared in a string of cities.

‘Criminals and miscreants are now hiding under the umbrella of these protests to unleash mayhem,’ he said, insisting that only essential workers should stay out on the streets.

‘We will not watch and allow anarchy in our dear state.’

As the tone hardened from the authorities, Nigeria’s police chief ordered anti-riot units deployed around the country.

‘The force will henceforth exercise the full powers of the law to prevent any further attempt on lives and property of citizens,’ a statement said.

Up until Tuesday, some 18 people had died in the demonstrations as clashes were reported between protesters and assailants wearing civilian clothes.

Witnesses said a police station was set ablaze in the Orile Iganmu district of Lagos on Tuesday morning.

In the capital Abuja, security forces violently dispersed crowds during the day on Tuesday and thick black smoke could be seen over the city.

Violence spread as well to the largest northern city of Kano as hundreds of people went on a rampage, burning vehicles and looting businesses.

A curfew also went into effect in Benin City after a pair of attacks on correctional facilities that left 1,993 inmates missing. 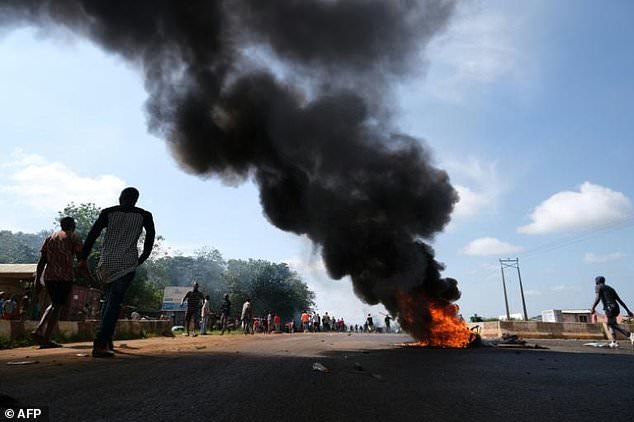 In the capital Abuja, security forces violently dispersed crowds during the day on Tuesday and thick black smoke could be seen over the city

The government announced the scrapping of the SARS unit and a raft of reforms over a week ago, but the bid to placate the protesters has failed.

Officials have called for the demonstrations to be suspended to give the authorities time to make good on their pledges.

Nigeria – where the median age is 18 – is a tinderbox of profound economic and social grievances.

Around half of the population of 200million is estimated to live in extreme poverty and unemployment is widespread among the youth.

Africa’s biggest oil producer is currently facing a recession as the fall in crude prices sparked by the coronavirus pandemic has battered government finances.

The Lagos Chamber of Commerce said in a statement that estimated economic losses in the past 12 days were at 700 billion naira $1.8 billion.

On Tuesday, the Senate called on President Muhammadu Buhari to address the nation on the protests ‘as a matter of urgency’.