A group of Nigerian girls living in Ireland have won an international tech competition with an app that helps people with dementia.

Their app, Memory Haven, was on one of 16 finalists at the Technovation World Summit, taking the senior girl’s division and being named People’s Choice.

In all, nearly 2,000 entrants from more than 60 countries entered the competition.

Memory Haven has a half-dozen features targeting memory loss and speech and recognition problems – all of which are  key issues faced by people with dementia.

Photo albums allow users to view tagged photos and identify who is in the image, while a reminder feature alerts both patients and caregivers when its time for medication.

Memory games in the app allow users to ‘to put their cognitive ability to the test while promoting memory retention in a fun way and improving focus and speed,’ Rachael Akano, 16, told NPR.

The results from the games are kept in the app, helping doctors monitor their ongoing condition.

Dementia patients can have trouble speaking, so a voice-recognition feature translates their words into text.

Since research indicates musical memories are the least affected by dementia, the trio integrated personal playlists that work with facial recognition. 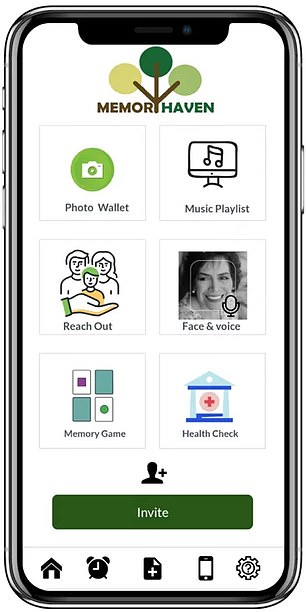 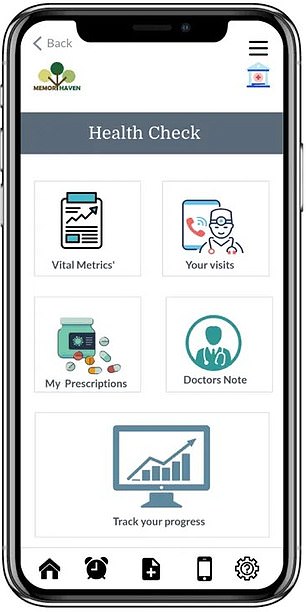 The girls’ app, Memory Haven, helps people with dementia with memory games, photo albums and music playlists that work with facial recognition. ‘It detects the mood of the user and plays playlists based on their mood,’ Rachael Akano, 16, said. ‘So if they’re sad, it will play something to brighten up their spirits.’

‘It detects the mood of the user and plays playlists based on their mood,’ Akano told the Cable. ‘So if they’re sad, it will play something to brighten up their spirits.’

Patients’ medical records are stored on the app for easy use by doctors, hospitals and caregivers – including symptoms, diagnoses, lab results, medications and treatments.

Rather than a password, that may be forgotten, security is maintained with touch ID or facial recognition program.

Akano and her teammates – her sister, Margaret, and their friend Joy Njekwe – live in Drogheda, about 30 miles north of Dublin.

They were mentored by Evelyn Nomayo, an Afro-Irish data scientist at Trinity College, whose mother suffered from dementia.

Nomayo got involved in mentoring because she was tired of women and people of color feeling isolated in STEM fields.

‘I’m currently doing a Ph.D. [in computer science and statistics]. During this process, I found that most of the time, I was either the only girl in class or the only black person or person of color,’ she told NPR.

‘Whether I’m working or being educated, it’s so obvious that there’s a shortage of women in this space. So I just felt it: There was a need to bring more girls and people of color into that space.’

Nigerians represent the largest African community in Ireland, with many coming in the early 2000s to pursue education or economic opportunities.

Between 2002 and 2006 alone, the population of Nigerian citizens in Ireland grew by over 80 percent.

Sadly the girls felt the sting of bigotry and xenophobia after making the finals.

‘We got amazing comments, but the negative ones just naturally stick with you,’ Akano told NPR. ‘People said we weren’t Irish and that we didn’t deserve to represent the country. They put a monkey face. Just crazy, crazy oceans of racism for absolutely no reason.’

But it didn’t cool their enthusiasm – their excited reaction to winning was caught on video.

Memory Haven will launch in app stores later this month.

Other winners included a team of younger girls in India who developed a digital caretaker for Alzheimer’s patients and a family in Kazakhstan who developed an automated sign language interpreter that translates signs into text.

All winners will receive a portion of almost $30,000 in cash and prizes, which will go to further their STEM education and/or help bring their product to market.

‘Every year we are blown away by the tenacity of the girls and families participating in our programs around the world and the incredible empathy and creativity they apply to tackling critical, timely issues such as climate change and distance learning, or COVID-19 and mental health,’ said Technovation founder Tara Chklovski in a statement.

‘In a year when all of us are reeling from new and different realities brought on by the global pandemic, their resilience and determination to positively impact their communities continues to be an inspiration.’

‘Each individual brings their own unique creativity and ideas for what our future world will look like, and how technology can be used to create it,’ said Marian Croak, Vice President of Engineering at Google.

‘We must continue investing in girls and other historically underrepresented individuals and show them our support to keep thinking and dreaming. Our society is desperate for their minds and energy.’

A recent UN report warned that the socio-economic impacts of COVID-19 could wipe out 50 years of progress in improving girls’ access to education, healthcare and opportunity.