Detectives hunting a highly professional burglar responsible for a series of violent raids across the Home Counties say they have received more than 100 emails and phone calls with information from the public.

Police believe a current or former member of the armed forces could be responsible for the seven aggravated burglaries which have occurred in Surrey, Sussex, Kent and the Thames Valley during the past three years.

Since making a public appeal on Tuesday, the investigation team, named Operation Prometheus, said it has had a ‘brilliant response’.

Detective Inspector Dee Fielding, from Surrey Police, said: ‘We have had a brilliant reaction from the public to our appeal, with more than 100 emails and phone calls coming into our dedicated email address OpPrometheus@surrey.pnn.police.uk and through our contact centre.

‘I would also like to thank the media for their help in publicising this case which will hopefully bring an offender to justice. 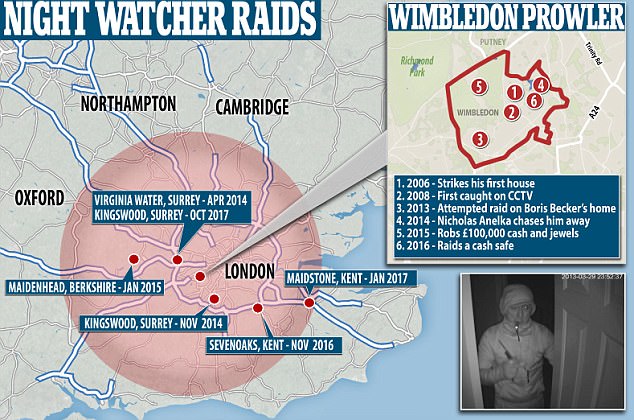 The map on the left shows the addresses targeted by the Night Watcher, and the inset shows several houses hit by the Wimbledon Prowler 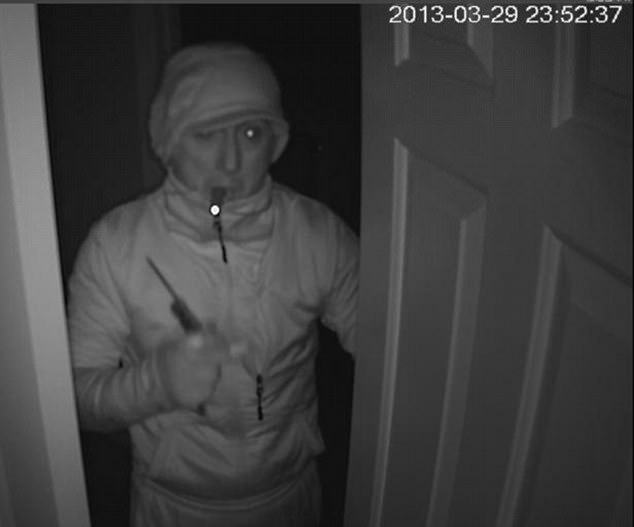 ‘The public are key in helping with our inquiries and I would urge anybody with any information to get in touch.

‘We will now get to work on assessing the information and see how it impacts on the future of the investigations being carried out by ourselves and our colleagues at Kent, Sussex and Thames Valley police forces.

‘At this stage it is too early to say what other cases may form a part of our inquiries, however we will be keeping an open mind and we will keep the public updated as we progress.’

The Metropolitan Police said they have examined the possibility of links with a serial offender nicknamed the Wimbledon Prowler but they were not ‘formally linking’ the offences.

The Prowler has been linked to more than 200 burglaries in south-west London.

He is said to target the wealthy and has stolen jewellery worth £10 million over 12 years.

Detective Superintendent Guy Collings, of the Met, said: ‘When any such series of burglaries occur, we of course examine the possibility of links across force and county borders.

‘In this case, whilst there are some broad similarities, for example in terms of detailed preparation, no weapons or threats have ever been used in the Wimbledon series and we are not formally linking the two series at this stage.’