The Earl of March was repeatedly beaten in a terrifying ordeal at Goodwood House, his ancestral seat near Chichester in West Sussex

The Night Watcher struck at a stately home, tying up its aristocratic owners and forcing them to open a safe.

The Earl of March was repeatedly beaten in a terrifying ordeal at Goodwood House, his ancestral seat near Chichester in West Sussex.

The intruder escaped with valuables worth around £700,000, including a ring Charles II gave to a mistress who was an ancestor of the earl.

The owners remained tied up until the morning, when a member of staff arrived for work.

The Grade I listed building, set in grounds used for horse racing and motor sport, was targeted in January 2016. Police said the burglar, wearing a balaclava, used a ladder to break in through a first-floor window.

Lady March, 54, went to investigate and ended up running into the robber outside her door.

He pushed her back into her bedroom and hit her 61-year-old husband over the head, causing a serious ear injury.

Several high-value watches, including a Rolex and a Girard-Perregaux, were also taken, along with emerald, diamond and sapphire rings, earrings, bracelets and necklaces.

One item, known as the ‘CL’ ring, was a gift from Charles II to his mistress Louise. ‘The C is for Charles, the L is for Louise and it is integral to the whole history of Goodwood,’ said a spokesman for the estate after the robbery.

So precious is the ring that it has seldom been on display and was last seen in public when Downton Abbey’s creator, Julian [Lord] Fellowes, was allowed to try it on while filming an ITV series on stately homes. 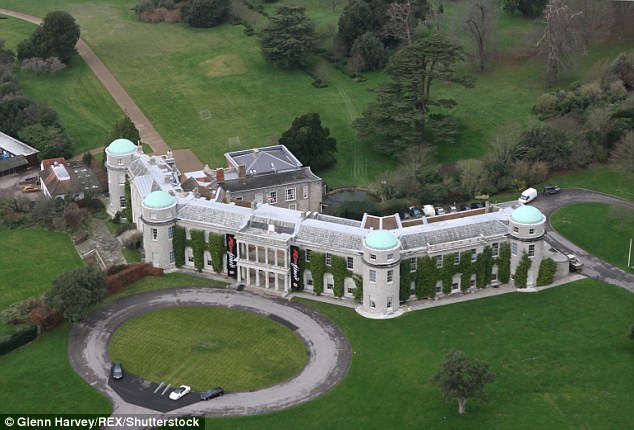 The intruder escaped with valuables worth around £700,000, including a ring Charles II gave to a mistress who was an ancestor of the earl. Pictured: Goodwood House in West Sussex

She left the ring to her son, Charles (named after his father the king) and it has gone down the male line ever since. He was later made Duke of Richmond and acquired Goodwood.

Last night, Detective Inspector Till Sanderson of Sussex Police said: ‘We carried out an extensive investigation into the robbery at Goodwood House and exhausted all lines of inquiry. We have worked with Surrey Police on their investigation and welcome this renewed appeal to bring this man to justice.’

Information on the offender can be provided by email to OpPrometheus@surrey.pnn.police.uk or by telephone on 101 and ask for Surrey Police, Op Prometheus or Crimestoppers on 0800 555 111.