A woman with a colostomy bag had it ripped off at a nightclub by bouncers who thought it was a security threat.

That’s hardly the first negative experience 30-year-old NeQueshia Davis, known as Sha, has had since she was diagnosed with Crohn’s in 2008.

Davis, a hair stylist and cosmetologist from Killeen, just north of Austin Texas, developed the condition within two months of welcoming her first child.

She needed eight surgeries and eventually was told a colostomy bag was the only thing that would relieve her agony.

But since then, Davis has had to endure many embarrassing situations since having her colostomy bag fitted, as many people still don’t understand what it is and they often assume the bulge under her top is something she is trying to hide. 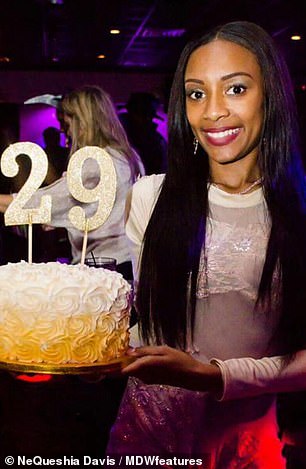 NeQueshia Davis, now 30, was diagnosed with Crohn’s in 2008, weeks after having her first child. After eight surgeries, doctors said a colostomy bag was her best option 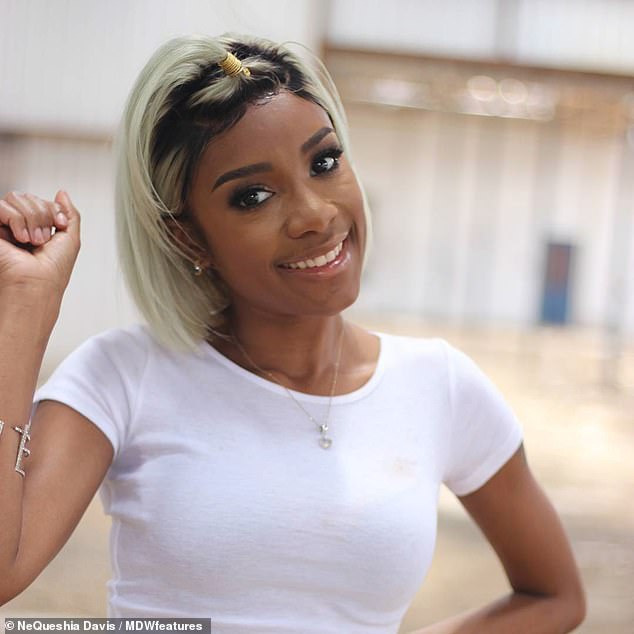 Davis has had to endure many embarrassing situations since having her colostomy bag fitted, as many people still don’t understand what it is

‘I have had so many negative experiences in public with my stoma, especially in airports and night clubs,’ Davis said.

‘The work staff in the airports act like they’ve never seen or heard of a colostomy bag when I’m going through the security check points. Some workers will look disgusted or will pat me down roughly without any care for my colostomy bag.

‘At night clubs the security guards have patted me down so rough and one time a security guard actually tore off my stoma bag after pulling at it so hard, then he questioned me on what it was.

‘It can also be embarrassing when I’m in quiet places and my stoma bag passes gas, or when it needs to be emptied and it looks like a balloon is sticking out of my shirt.

‘I’ve had shop workers stare at me when it’s been full because they think I’ve stolen something.’

Crohn’s is fiercely debilitating, caused by issues in the immune system.

In most of us, our immune cells can tell the difference between friendly bacteria and invading pathogens. In people with Crohn’s, the immune cells in the GI tract see everything as an invasion, mounting needless defenses whenever anything passes through.

It is not that rare. It may affect up to 780,000 Americans, according to the Crohn’s & Colitis Foundation.

It’s not clear exactly what causes Crohn’s. It may be triggered by a virus, but the most popular theory is that it is hereditary.

However, diagnosis tends not to come until later, between the ages of 15 and 35, as was the case for Davis, who was diagnosed at 19, after giving birth.

Crohn’s is not caused by pregnancy, but pregnancy is thought to suppress Crohn’s for the entire gestation period, before flaring up – again, or for the first time.

Davis says it has been hard to adjust to life after surgery. 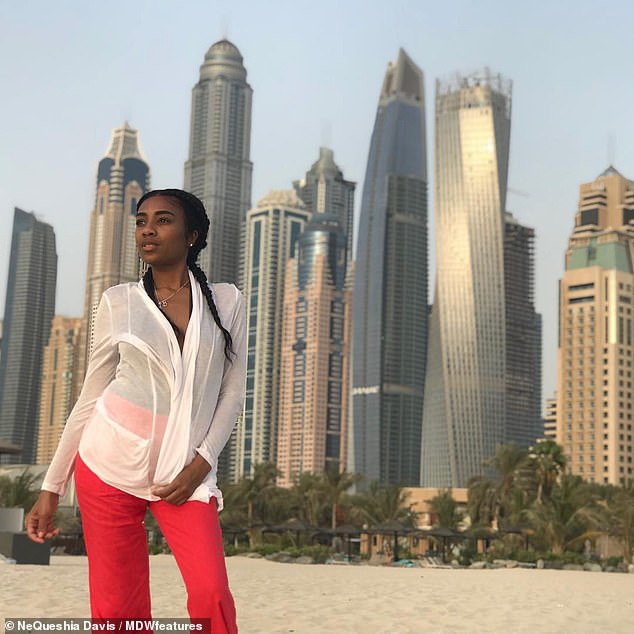 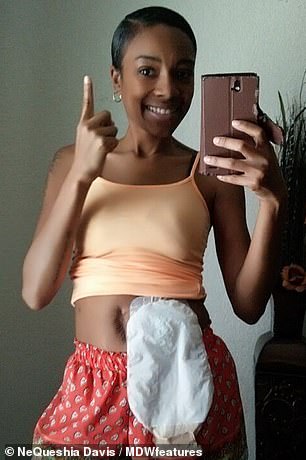 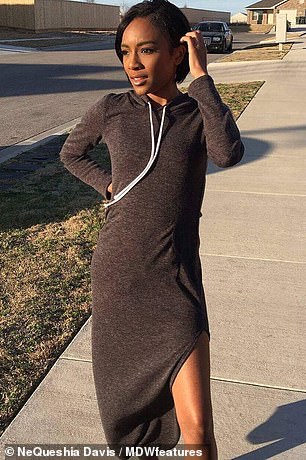 ‘I find myself depressed or feeling like I’ve been set back when before I felt like I was moving forward.

‘When I was diagnosed I felt very confused and in so much pain.

‘Eventually though you have to snap out of it and keep fighting.’

She adds: ‘Being diagnosed with Crohn’s has changed my life from the everyday living with a colostomy bag, to the way I eat and learning to feel comfortable with all of the changes.

‘I hope to not have any more surgery but if an active form of Crohn’s does appear again which medication can’t help then I will need more surgeries. 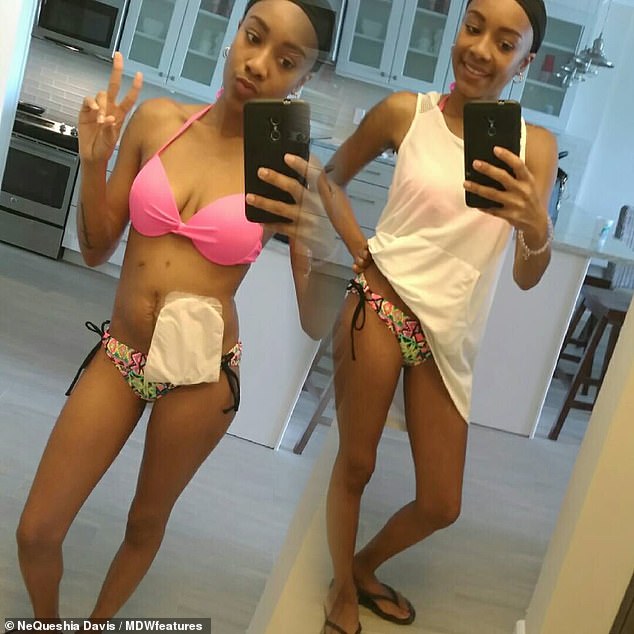 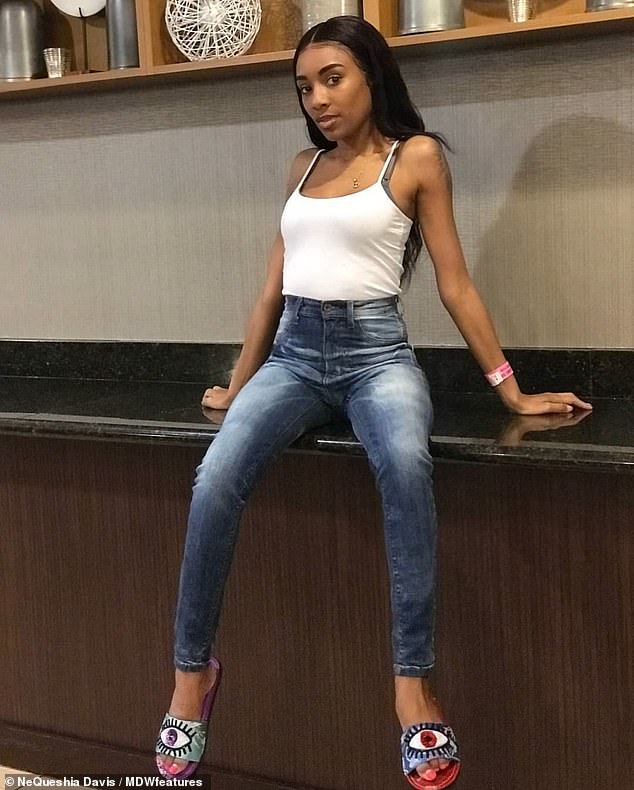 Prior to having her baby, Davis had not experienced Crohn’s-like symptoms 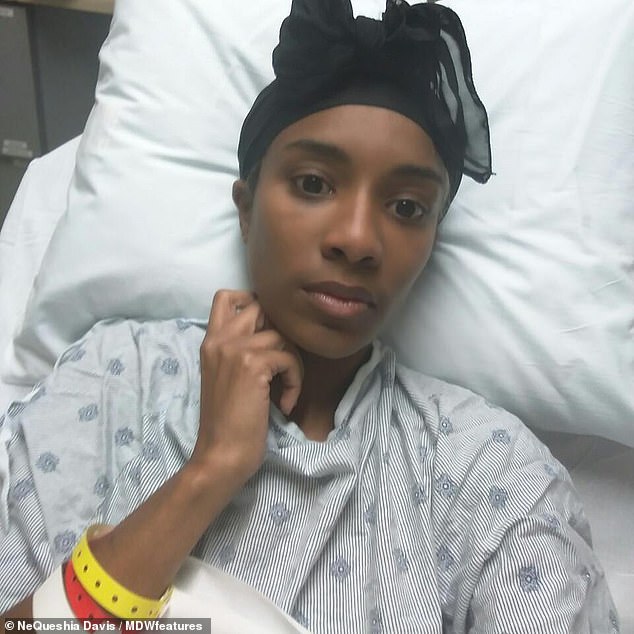 Now, Davis doesn’t need more surgeries because she is on medication, but there is always a risk of a severe flare-up

‘At one stage before my stoma was fitted my condition got so serious that I had to have emergency surgery because my intestines were so inflamed that they were causing a blockage, so my food couldn’t go through smoothly.

‘That caused me so much pain in my stomach and I was vomiting as I couldn’t keep my food down, which caused me to lose a tremendous amount of weight. That was the most ill I’ve been before surgery.’

Sha continues to spread her positivity regarding Crohn’s disease, as she hopes to motivate others to continue to fight rather than give up and let the disease take control of their lives.

Despite her diagnosis, she is still very grateful for the life she is able to lead, and she doesn’t let it stop her from living each day as it comes, sharing her story on Instagram at The Girl With The Bag.