Nightmare on the beaches for Tui: Travel giant battles for survival as pandemic triggers a record loss of £1.3bn in just three months

TUI is battling for survival after the cancellation of summer holidays triggered a record loss of £1.3billion in just three months.

Underlining the impact of the pandemic on the tourism industry, the travel group revealed sales had been virtually wiped out with just one in six summer holidays for this year.

Revenues collapsed by 98.5 per cent to £67million in the three months to the end of June as thousands of flights were grounded and its holiday resorts sat empty.

Holiday hell: Travel group Tui revealed sales had been virtually wiped out with just one in six summer holidays for this year

The tour operator, which received a fresh £1billion bailout from the German government this week to see it through the winter, racked up a £1.3billion quarterly loss – equivalent to more than £14million a day.

This has pushed it £2.1billion into the red in the first nine months of its financial year.

Bosses yesterday said they were considering a rights issue – when shares are offered at a special price to existing shareholders – or selling part of its business, such as the Marella cruise line, to ensure its long-term survival.

Chief executive Fritz Joussen insisted there would be no fire sale of assets and that plans for raising new equity were in ‘early days’.

The dramatic downfall of Tui, which crashed out of the FTSE 100 earlier this year as the crisis escalated, prompted one expert to warn the entire travel industry is on ‘life support’.

Hopes that this year’s summer holidays would be saved by so-called ‘air bridges’ with popular destinations have been dashed, in an agonising blow for airlines and travel companies.

Tui said the Government’s decision last month to force travellers returning from Spain, one of its biggest markets, to quarantine for 14 days had hit bookings. 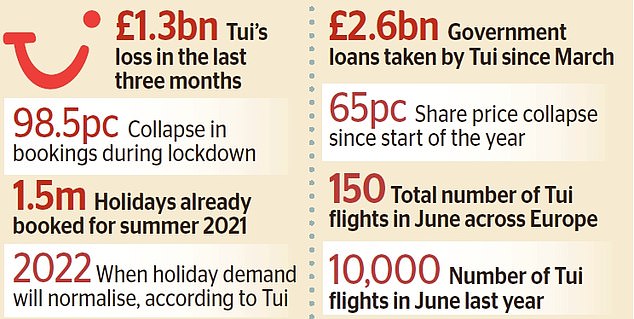 There are growing fears that other holiday destinations with rising infection rates – including France – will be added to the 14-day quarantine list.

This has deterred many households from booking last-minute summer holidays.

Yesterday Tui revealed that just 55 of its hotels have reopened, around 15 per cent of its total portfolio, and 2,300 flights took off last month.

The collapse in demand for overseas trips has also forced it to cut the number of holidays it is offering for the coming winter by 40 per cent and the number of summer 2021 holidays by 20 per cent.

At the moment its hotels are a quarter full, due to depressed demand and social distancing

And its cruises remain suspended in line with German and UK government advice.

But Tui was more upbeat about the prospects for next year’s summer holiday season, describing sales as ‘very promising’.

It said families had booked more than twice as many holidays for summer 2021 as it had for 2020 at the same point last year. It acknowledged, however, that many of these are families rebooking this year’s cancelled trips.

The business, which is cutting 8,000 staff and £270million per year in costs, is now working on the assumption tourist numbers will not recover until 2022.

It has already been forced to take drastic action stay afloat amid fears earlier this year it could run out of cash by October.

A third of its High Street stores are being shut with the loss of 270 jobs as part of plans to go digital, and the firm has slashed costs by 70 per cent.

And it had already taken one loan, of £1.6billion, from Germany’s government in March.

Tui’s fight for survival reflects the precarious situation faced by firms across the industry, including the airlines, while bosses at Heathrow have warned that as many as 25,000 working at around 400 firms which operate out of the airport could face redundancy.