Haley added that ‘under the Trump administration, the world knew where we stood.’

‘At the U.N., we took the names of our enemies and had the backs of our allies,’ the former South Carolina governor said.

Piggybacking off of former President Donald Trump’s campaign nickname for Biden – ‘Sleepy Joe’ Haley noted, ‘With Joe Biden asleep at the switch, our friends don’t trust us, and our enemies are rejoicing.’ 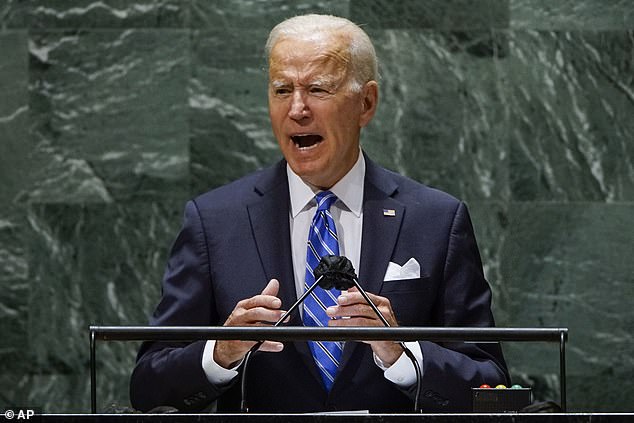 In Biden’s first address to the U.N. he didn’t mention China or Russia by name.

Instead he pledged that the U.S. wasn’t interested in starting a new Cold War – something U.N. Secretary-General Antonio Guterres said he feared would happen between the U.S. and China.

He also knocked ‘attempts by stronger countries to dominate weaker ones’ – likely a coded reference to Russian aggression toward Ukraine.

‘The United States is ready to work with any nation that steps up and pursues peaceful resolution to shared challenges – even if we have intense disagreements in other areas because we’ll all suffer the consequences of our failure if we do not come together to address the urgent threats like COVID-19, climate change or enduring threats like nuclear proliferation,’ Biden also said.

In a slight to China, Biden name-dropped the country’s Xinjiang region – where large numbers of Uyghur Muslims are being kept in detention camps.

‘We all must call out and condemn the targeting and oppression of racial, ethnic and religious minorities,’ Biden said.

Biden did mention Iran and talk about denuclearization of the Korean peninsula – signaling to Iran and North Korea that the door was open for negotiations.

He spoke about Venezuela as well, listing it among the countries that are thirsting for democracy.

‘The truth is, the democratic world is everywhere. It lives in the anti-corruption activists, the human rights defenders, the journalists, the peace protesters. On the front lines of the struggle in Belarus, Burma, Syria, Cuba, Venezuela and everywhere in between,’ Biden said. ‘It lives in the brave women of Sudan, who withstood violence and oppression to push the genocidal dictator from power.’

Biden tried to spin the U.S.’s frenzied pull-out from Afghanistan as a positive.

‘I stand here today, for the first time in 20 years the United States not at war. We’ve turned the page. All the unmatched strength, energy and commitment, will and resources of our nation now fully and squarely focused on what’s ahead of us. Not what was behind,’ Biden said.

‘I know this, as we look ahead, we will lead,’ he continued. ‘We will lead on all the greatest challenges of our time.’

‘But we will not go it alone,’ Biden added. ‘We will lead together with our allies and partners and in cooperation with all those that believe, as we do, that this is within our power to meet these challenges, to build a future that enlists all of our people, [and] preserves this planet.’

He said that by ending 20 years of conflict in Afghanistan the United States was concluding ‘this period of relentless war’ by ‘opening a new era of relentless diplomacy.’

‘Today many of our greatest concerns cannot be solved or even addressed through the force of arms,’ Biden said. ‘Bombs and bullets cannot defend against COVID-19 or its future variants.’

‘To fight this pandemic we need a collective act of science and political will,’ Biden said.

‘We’re back at the table in international forums, especially the United Nations,’ Biden said.

‘We are reengaged at the World Health Organization working in close partnership with COVAX to deliver life-saving vaccines around the world,’ he continued.

‘We rejoined the Paris climate agreement and we’re running to retake a seat in the Human Rights Council next year, at the U.N.,’ he added.

While Haley may have talked tough on Russia while serving as U.N. ambassador under Trump, the Republican president wasn’t particularly critical of Russian President Vladimir Putin during his one term in office.

At a meeting with Putin in Helsinki, Trump sided with Putin when asked if he believed American intelligence or the Russian president on the subject of 2016 election interference.

‘President Putin says it’s not Russia. I don’t see any reason why it would be,’ Trump said.

Trump was also complimentary of China’s COVID-19 response before he wasn’t.

‘China has been working very hard to contain the coronavirus. The United States greatly appreciates their efforts and transparency. It will all work out well. In particular, on behalf of the American People, I want to thank President Xi!’ Trump tweeted in January 2020.