Nine million drivers still use phones at the wheel

A ‘hardcore’ of more than nine million motorists are flouting the law by using their handheld mobiles at the wheel, according to the RAC.

Despite a major crackdown which has doubled fines and points for those caught out, the motoring group said its latest research indicates 9.2 million are continuing to text, talk, Tweet and even take photos and videos while driving.

This number soars to 16 million drivers when taking into account those who use their phones while at the wheel in stationary traffic.

A ‘hardcore’ of more than nine million motorists are flouting the law by using their handheld mobiles at the wheel, according to the RAC (file image)

The motoring group polled nearly 1,750 motorists last September and, again, this summer following the government’s introduction of tougher penalties for offenders in March, including doubling of fines to £200.

This followed a campaign by the RAC and the Daily Mail about the dangers of using a handheld mobile phone at the wheel.

While 89 per cent of drivers surveyed said they were aware of the law change, more than a quarter (26per cent) of those who knew of the tougher penalties admitted to regularly using their devices behind the wheel.

This is down from 31 per cent last year.

But RAC road safety spokesman Pete Williams said the situation ‘remains dire’ a year after research revealed the illegal use of mobile phones by drivers was at ‘epidemic proportions’.

He said: ‘It is clear we have a hard core of persistent offenders who believe they can get away with it by continuing to flout the law every day.’ 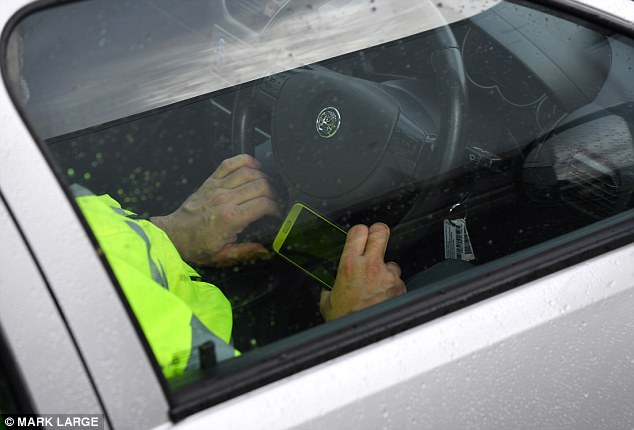 Mr Williams added: ‘The numbers of drivers still using their hand-held phones at the wheel remains at epidemic levels and is a serious problem for society.

‘The Government, police and road safety organisations still have a huge job to do to end the hand-held mobile phone menace.’

Since March 1, drivers who are caught using a hand-held phone will be hit with six points on their licence and a £200 fine – up from the previous penalty of three points and £100.

The illegal use of mobile phones by drivers was named as the number one concern for motorists surveyed, with 16 per cent citing it as their biggest worry – ahead of the cost of fuel and the condition of local roads.