Nine men have been charged over the alleged hazing death of an Ohio University student, 18, who was ‘forced to take drugs and drink a gallon of alcohol in an hour.’

The Athens County prosecutor announced indictments Tuesday related to the death of 18-year-old freshman Collin Wiant last November and allegations about members of the fraternity he had sought to join.

Two former students indicted for involuntary manslaughter and another for reckless homicide.

Rex Elliott, an attorney for Wiant´s parents, said the charges mark an important step in their broader quest to eliminate hazing and help others understand the costs of such behavior.

‘In order to affect change, there have to be consequences,’ Elliott said.

Nine men were charged over the alleged hazing death of Ohio University student Colin Wiant, 18, (pictured), who was forced to take drugs and drink a gallon of alcohol in an hour 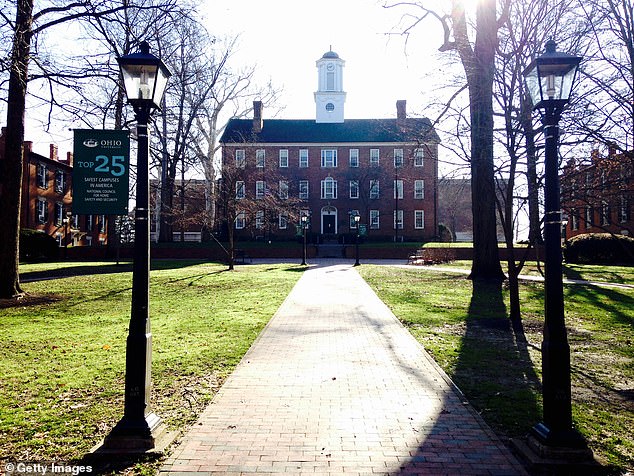 The Athens County prosecutor announced indictments Tuesday related to the death of 18-year-old freshman Collin Wiant last November and allegations about members of the fraternity he had sought to join. Pictured is Wilson Hall president’s office at the Ohio University campus

Most of the defendants face drug- or alcohol-related charges, such as permitting drug abuse or trafficking in cocaine, LSD or harmful intoxicants. Five are charged with misdemeanor hazing.

Wiant’s family has sued the Sigma Pi fraternity, alleging the teen from the Columbus suburb of Dublin died of asphyxiation after ingesting nitrous oxide provided to and forced on him by fraternity members.

It is alleged members of Sigma Pi allegedly forced him to ingest nitrous oxide from canisters while doing ‘whippets’ inside their fraternity house on November 11, 2018.

Whippets refer to the act of huffing nitrous oxide from canisters, like whip cream cans, to receive a quick high.

He was found unresponsive the next morning and local authorities were called.

The fraternity has denied those allegations and said Wiant wasn’t a pledge at the time because he had been removed from the process weeks earlier.

The university later expelled Sigma Pi for hazing, alcohol and drug use and other violations.

Seven of the defendants were members of Sigma Pi, according to The Columbus Dispatch, which has reported in detail on the case.

Two of the defendants are currently enrolled at the university, and six are former students, school spokeswoman Carly Leatherwood confirmed.

Court records listed no attorneys for the defendants as of Tuesday afternoon. At least one was scheduled to be arraigned Wednesday, and initial court appearances for some weren’t yet scheduled. 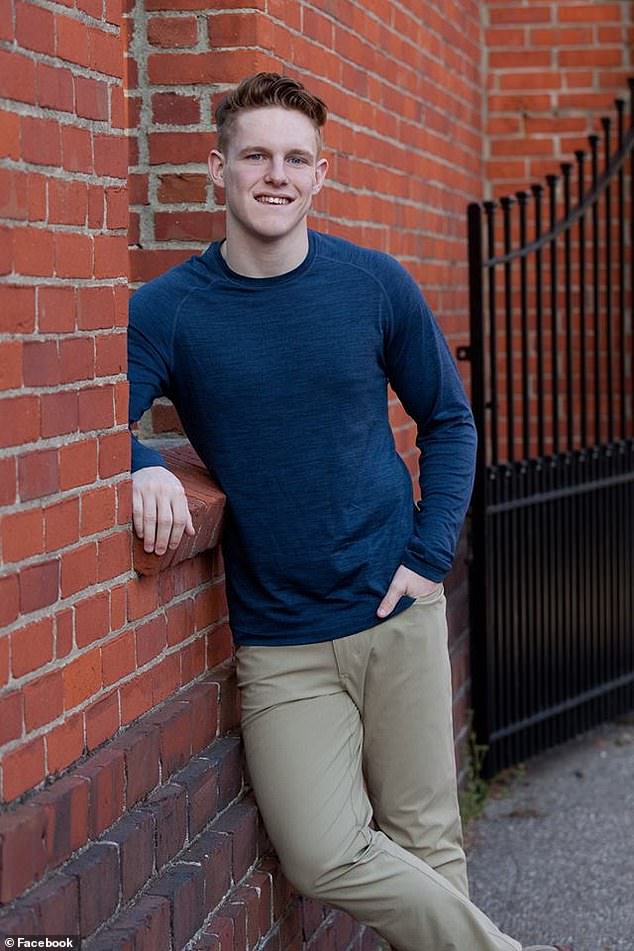 Collin Wiant´s family has sued the Sigma Pi fraternity, alleging the teen from the Columbus suburb of Dublin died of asphyxiation after ingesting nitrous oxide provided to and forced on him by fraternity members 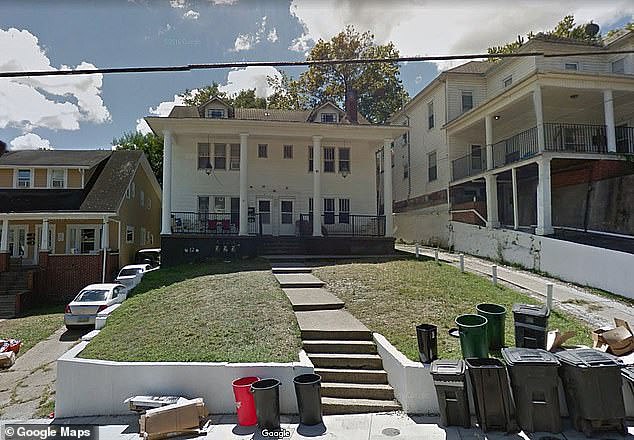 The lawsuit filed last February in Athens County Court alleges that Wiant was beaten with a belt, pelted with eggs, deprived of sleep, and forced to drink a gallon (3.8 liters) of alcohol in an hour, as part of his first year initiation.

He was also forced to consume a toxic cocktail of cocaine, marijuana, Adderall and Xanax, according to his parents, Kathleen and Wade Wiant.

The suit, seeking at least $25,000 in damages, names both the local chapter of Sigma Pi Fraternity and the fraternity’s Lebanon, Tennessee-based national office as the responsible parties.

According to the suit, Wiant ominously told a friend that he knew he was going to be hazed by fraternity members on the night of his death.

He was taken to the OhioHealth O’Bleness Hospital in Athens, where he was later pronounced dead.

The lawsuit, filed by his parents Kathleen and Wade, outlines months of hazing prior to their son’s death, describing the unnecessary acts as physically, mentally and emotionally taxing on the teenager. 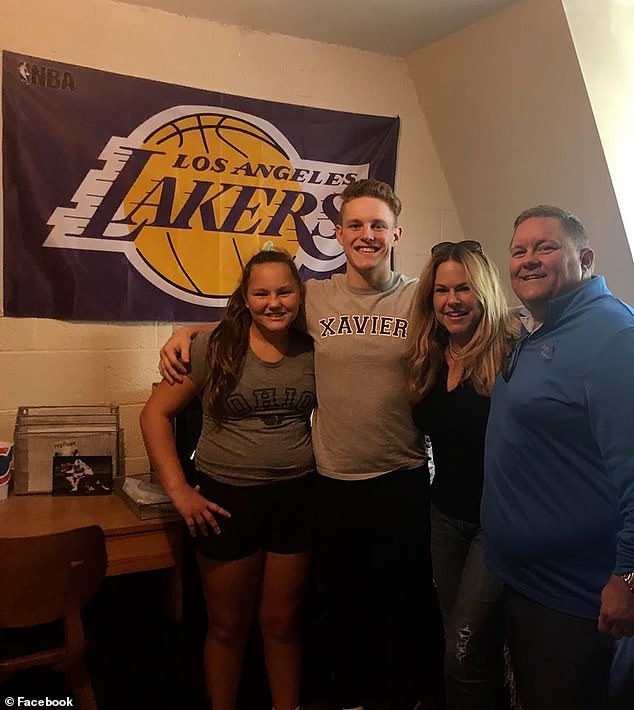 Collin was rushed to Ohio Health O’Bleness Hospital in Athens where he was pronounced dead. His unconscious body had been found surrounded by nitrous-oxide cannisters (pictured: Owen poses with his sister, and his parents Kathleen and Wade, in 2018) 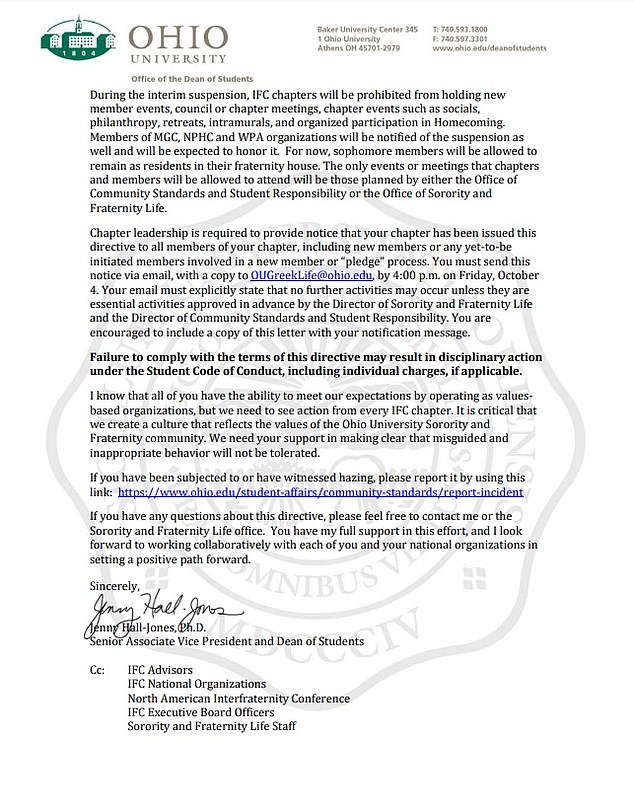 Allegations include belt whippings, deprivation of sleep, egg peltings and being forced to consume a toxic cocktail of cocaine, marijuana, Adderall and Xanax.

The family also say their son was required to be ‘on call’ at all hours of the day for other Sigma Pi members, which contributed to an sharp decline in his academic performance and mental health.

The Sigma Pi fraternity was ordered to shut down immediately in the wake of Wiant’s tragic death.

Then in October, all fraternities at Ohio University have been indefinitely suspended after claims of rampant hazing.

On Thursday, school officials announced in a statement that the suspension of 15 fraternities at the public university in Athens would be immediate and indefinite after at least seven organizations were accused of hazing.

The statement read: ‘This decision, enacted because of a growing concern elevated by allegations of hazing against seven IFC chapters, immediately suspends these organizations from engaging in all chapter events, meetings, and activities until further notice.’

According to a letter sent to fraternity presidents, the Office of Dean of Students received allegations that two chapters were hazing new members.

Those chapters were reportedly placed on a ‘cease and desist.’

It also said the Office of Dean of Students received reports that named five more chapters of hazing the day before the letter was released.

‘It is deeply troubling that seven of our Interfraternity Council (IFC) chapters have been or will be under investigation this semester for possible violations of the University’s Student Code of Conduct,’ the letter said.