No 10 insists the Brexit talks are in a ‘good position’

No 10 today insisted the Brexit talks are in a ‘good position’ despite EU Commission chief Jean-Claude Juncker rebuking the UK’s ‘unsatisfactory’ policy papers.

As the third round of face to face negotiations continued today, Mr Juncker echoed the criticism of chief negotiator Michel Barnier about the UK approach.

The Government has spent much of the summer publishing position papers on a variety of Brexit issues but has refused to restrict itself to settling the divorce agreement before any consideration of the future relationship.

In other developments, former foreign secretary William Hague said it was clear the EU was ‘giving Britain the run around’. 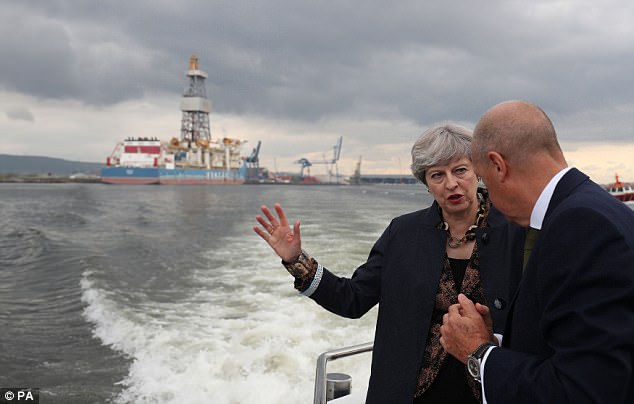 Theresa May (pictured in Teesside last week) believes the Brexit talks are in a ‘good position’, No 10 said today in response to Mr Juncker’s rebuke

Brussels is insistent the two issues be taken in sequence and Mr Barnier yesterday warned ‘serious’ negotiations were yet to begin because of the impasse.

This week’s Brexit talks are expected to cover:

Theresa May’s official spokeswoman today insisted the talks so far has been ‘positive and constructive’.

She said: ‘We have published numerous position papers as well as future partnership papers.

‘We will see where we get to on Thursday but we believe we are in a good position and we would like to move on to discuss the future relationship.’

She added: ‘The talks this week are technical before we move onto more substantial talks in September.

‘Our desire is to discuss both. We have repeatedly said that and that’s what we are working towards.’

Asked why Britain has not published a position paper on the Brexit Bill – one of three issues Brussels wants settled before trade talks – No 10 said more papers would be forthcoming in the coming weeks.

Pressed on whether the strategy would be changed if no progress is made to end the deadlock this week, the spokeswoman said: ‘Let’s see what David Davis has to say on Thursday.’ 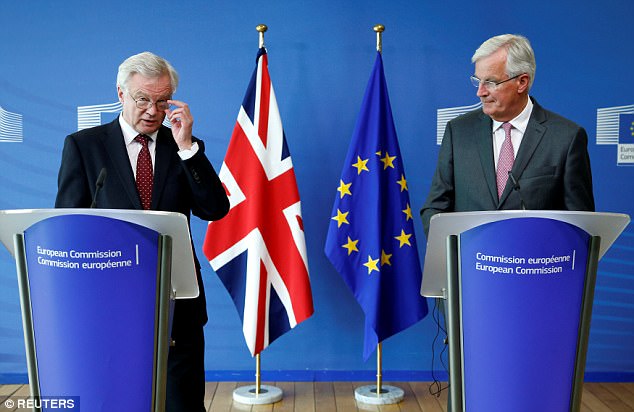 Mr Juncker today said official papers setting out the Government’s positions were not satisfactory and it was ‘crystal clear’ that an ‘enormous amount’ of issues needed to be settled before talks on a future trade deal could begin.

Brexit Secretary David Davis last week unveiled five position papers due before the next round of talks. They covered:

Mr Juncker said the UK ‘hesitates showing all its cards’ but added: ‘I did read, with the requisite attention, all the papers produced by Her Majesty’s Government and none of those is actually satisfactory.

‘So there is still an enormous amount of issues which remain to be settled.

‘Not just on the border problems regarding Ireland and Northern Ireland, which is a very serious problem in respect of which we have had no definitive response, but we also have the status of European citizens living in the UK and UK citizens living on the Continent.

‘We need to be crystal clear that we will commence no negotiations on the new relationship – particularly a new economic and trade relationship – between the UK and the EU before all these questions are resolved.’

Mr Juncker added: ‘First of all we settle the past before we look forward to the future.’

Lord Hague wrote in the Telegraph that only Angela Merkel or Emmanuel Macron can step in to help with the impasse now. 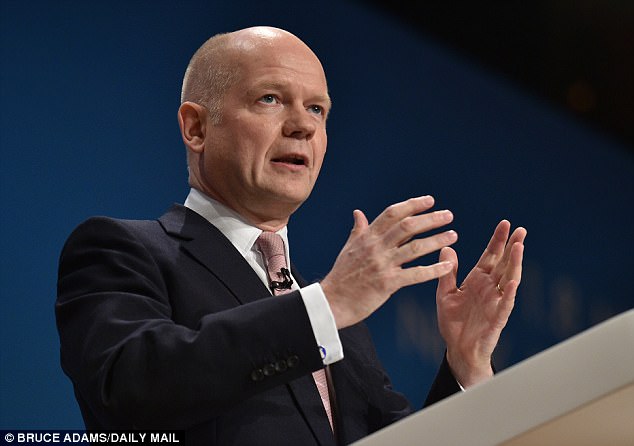 In other developments, former foreign secretary William Hague said it was clear the EU was ‘giving Britain the run around’

He said that the EU’s strategy of trying to conduct talks only through the official team was giving ‘Britain the run around and increasing pressure on the Government’.

And he said that the time will come where governments will have to make ‘serious interventions’ if the talks are going to reach a deal in their interests.

Lord Hague continued: ‘The danger is that the EU itself will go round in circles with no one taking the responsibility for pushing things forward.’

Mr Davis and Mr Barnier met on Monday at the start of the latest round of talks which highlighted differences between Brussels and Whitehall over the negotiating papers produced by the UK. 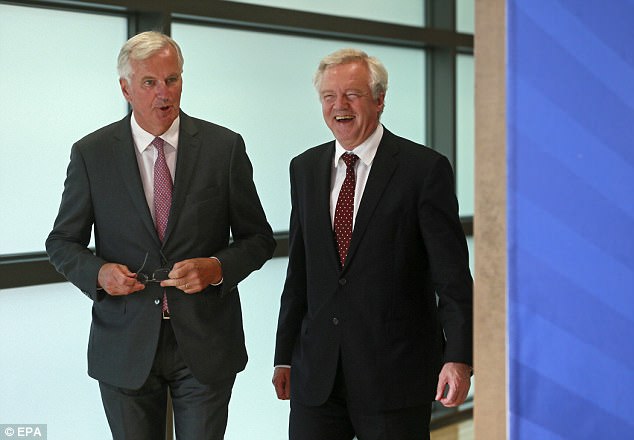 Mr Barnier said: ‘We need UK papers that are clear in order to have constructive negotiations.

‘And the sooner we remove the ambiguity, the sooner we will be in a position to discuss the future relationship and a transitional period.’

Mr Davis insisted the UK position papers produced in recent weeks – on issues including Northern Ireland and the continued access of goods to market – were strong in detail.

He said: ‘They are the products of hard work and detailed thinking that has been going on behind the scenes not just the last few weeks, but for the last 12 months, and should form the basis of what I hope will be a constructive week of talks.’