Australians could soon be driving past The Big Kilt or The Big Peanut on their next road trip.

Travel website Wotif has revealed the shortlist of finalists in the running to be gifted Australia’s prized ‘Next Big Thing’.

It is now up to the public to vote which local town will be home to the country’s newest over-sized tourist attraction.

After a two-week search that saw thousands of Aussies pitch their ‘Big Thing’ ideas, Wotif officials have narrowed it down to five finalists.

The Big Melon, Chinchilla in Queensland – Chinchilla, a town in the Western Downs Region, is renown for melon production and plays host to the famous Melon Fest. The people of Chincilla are looking for the Big Melon to celebrate the regions produce.

The Big Kilt, Glen Innes Highlands in New South Wales – Glen Innes Highlands- which is an eight-hours drive from Sydney- has a strong Celtic history and its residents want to honor the towns early Scottish settlers with a giant kilt, complete with their own Glen Innes’ signature tartan.

The Big Peanut, Kingaroy in Queensland – known as the ‘Peanut Capital of Australia’, the towns unique soil makes it the one of the worlds most ideal places to grow peanuts. The town also houses Australia’s largest peanut processing plant.

The Big Tulip, Mittagong in New South Wales- The residents of Mittagong, a town located in the Southern Highlands, plant over 100,000 tulips at their annual floral festival, Tulip Time. They believe a Big Tulip will commemorate theirs, and the neighbouring tulip towns, efforts. 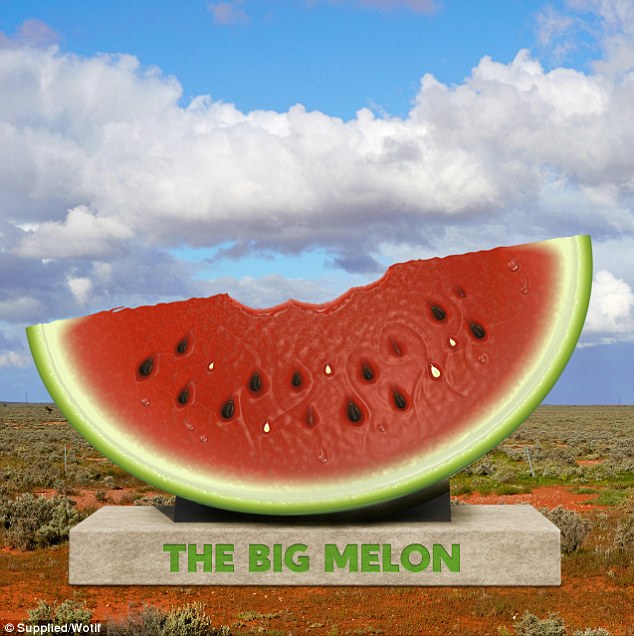 The Big Melon, Chinchilla in Queensland, was chosen due to it’s towns enormous melon production 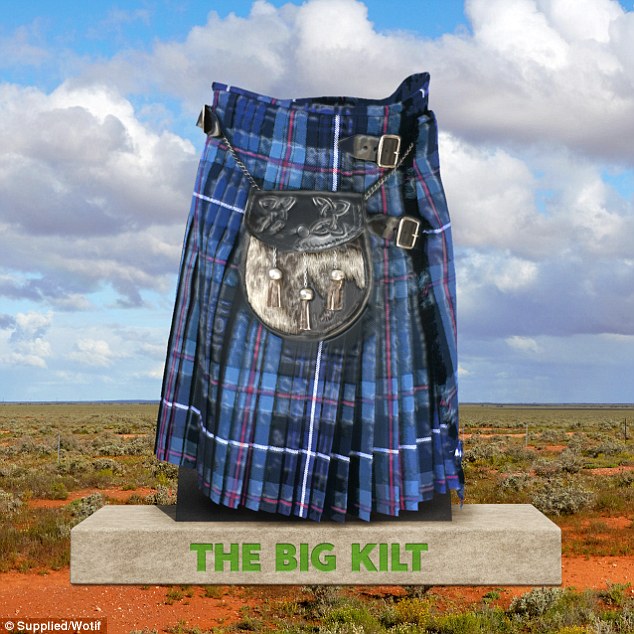 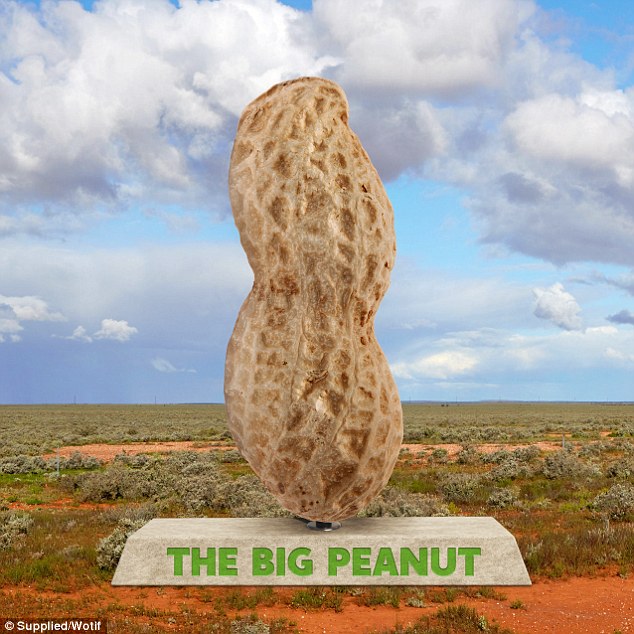 The Big Peanut, Kingaroy in Queensland – known as the ‘Peanut Capital of Australia’ the towns unique soil makes it the one of the world’s most ideal places to grow peanuts 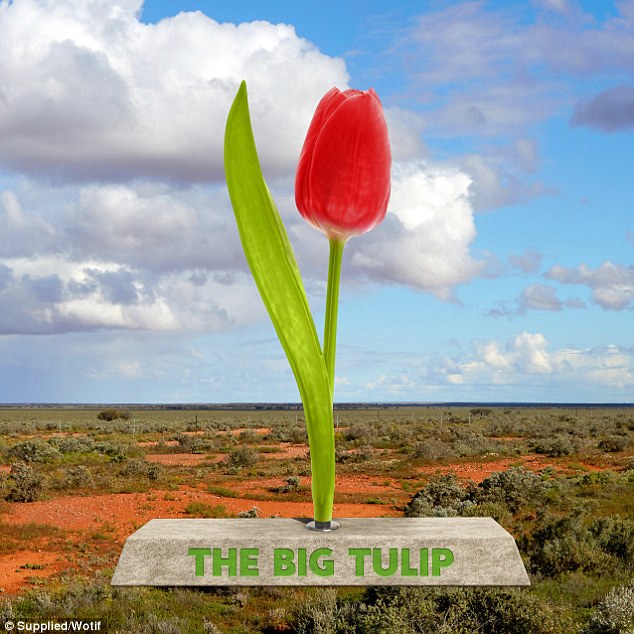 The Big Tulip, Mittagong in New South Wales. The residents of Mittagong plant over 100,000 tulips at their annual floral festival, Tulip Time

Wotif Managing Director, Daniel Finch, said that the final entries were picked as they ‘showed a long-term connection to the local area’ and said he is confident that the final ‘Big Things’ will positively impact their community.

‘Collectively, the submissions reflect what makes Australian culture so unique. From the quirky, to the humorous, to the patriotic to the bold, with so many brilliant submissions, the Wotif team had the near-impossible task of choosing only a handful of entries to be shortlisted for public voting.’ he said.

Mr Finch also revealed the list of notable entries that didn’t quite make it, but deserved to be highlighted.

Ballina’s Big Prawn is another of Australia’s iconic big things. Built in 1989, the Big Prawn has undergone a makeover and was reopened in July 2013

They included the Bin Chicken in NSW, Big Chiko Roll in Bendigo, VIC, and the Big Choccy Milk in Newcastle, NSW.

Other notable mentions included The Big Budgie Smuggler, The Big Bunnings Sausage, The Big Steve Irwin and The Big Vegemite.

Local councils hope their ‘Big Things’ will follow suit of Aussie icons such as The Big Prawn, Big Banana and Big Pineapple and give their towns an extra push.

‘Tourism is a big part of our economy and especially in times when agriculture is suffering, like it is for many rural towns right now. With the Big Kilt, we’ll have another reason for people to stop and experience what our quirky town has to offer as well as support local businesses,’ said Margot Davis, Manager of Economic Development at Glen Innes Severn Council. 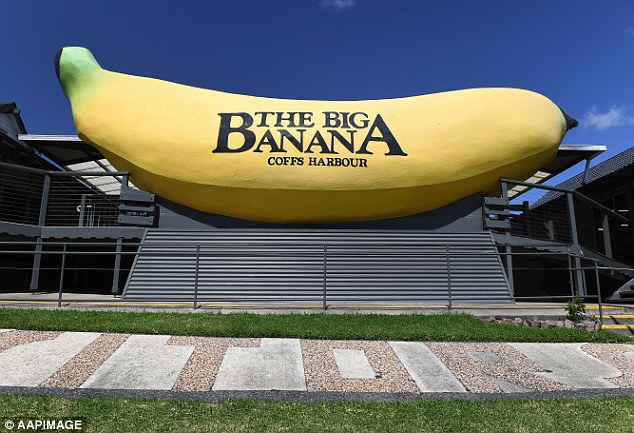 The decision is now in the hands of the Australian public, with the final winner of the ‘Next Big Thing’ to be determined in a two-week voting process to take place from 25 September to October 9.

Australia’s ‘Next Big Thing’ will be built and unveiled by the end of the year.

Australians can vote for the favourite ‘Next Big Thing’ finalist at www.wotif.com/nextbigthing. 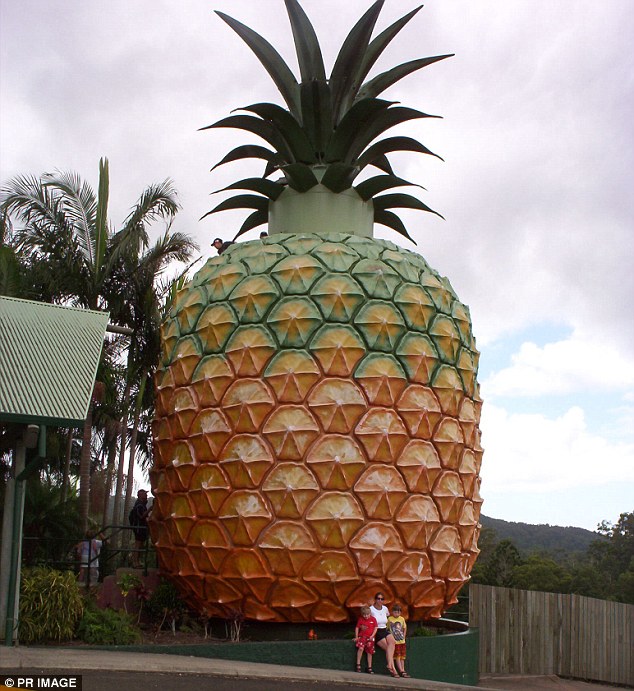