No butts! Tobacco firms urged to ramp up efforts to collect discarded cigarettes themselves

No butts! Tobacco firms are warned they face tougher laws requiring them to pick up fag ends off UK streets unless they ramp up efforts to collect discarded cigarettes themselves

By Valerie Elliott For The Mail On Sunday

Tobacco firms are being warned they face tougher laws unless they do more to clear cigarette butts off the streets.

Environment Minister Rebecca Pow has summoned industry chiefs to a meeting to give them the choice of ramping up their own efforts to collect more discarded cigarette ends, or of being forced to do so.

She is focusing her fire on the Tobacco Manufacturers’ Association and cigarette giants Philip Morris and Japan Tobacco International, which owns the Silk Cut, Camel and Benson & Hedges brands.

Cigarette butts are classed as single-use plastics and contain toxic chemicals such as arsenic, lead and nicotine which pollute waterways and kill marine life and birds. A man is pictured above smoking [File photo]

Outlining the Government’s new hard line in a letter to them, seen by The Mail on Sunday, she says: ‘If we cannot progress this discussion… we will have to reflect on what steps the Government can take to ensure the tobacco industry takes increasing responsibility for the litter its products create.’

Cigarette ends account for 66 per cent of all litter on the streets and Keep Britain Tidy estimates 226 million butts were dropped in England last year. Laid end to end, they would stretch 3,567 miles –more than the distance between London and New York.

Five years ago, the tobacco industry promised to intensify its efforts to clear the waste, but since then has contributed a paltry £150,000 towards the clean-up costs.

Cigarette butts are classed as single-use plastics and contain toxic chemicals such as arsenic, lead and nicotine which pollute waterways and kill marine life and birds.

Pet cats and dogs also eat them, causing vomiting, convulsions and on occasion even death.

The precise cost of cleaning up the discarded ends is unknown, but the total amount spent by local authorities on litter stands at more than £1 billion a year.

JTI has spent £150,000 on regional clean-up campaigns in the last five years, but Keep Britain Tidy said other major firms and the TMA have spent nothing.

Richard McIlwain, deputy chief executive of Keep Britain Tidy, said: ‘It’s time for the tobacco industry to step up to the challenge of ridding our environment of the millions of discarded butts that litter our streets, parks and beaches, pollute our watercourses and oceans and add to the toxic plastic soup that is choking our marine environment. 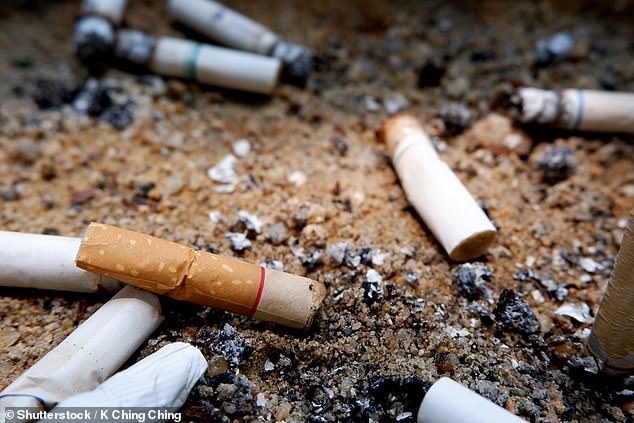 ‘Warm words and empty promises are not enough. We need them to take responsibility for the products they put on the market and educate their customers about doing the right thing with their butts once they have finished with them.

‘We know that many smokers don’t even consider their butts to be litter so there is a lot of work to do if we are to rid our environment of this menace.’

The Government is examining new powers under the Environment Bill that could force manufacturers to be responsible for all smoking-related litter.

Ministers have set a target of a smoke-free UK by 2030 but 7 million Britons admit to the habit, last year spending around £17.5 billion on tobacco products.

And a survey in 2018 found that 39 per cent of smokers had dropped a butt into the drain within the last month.