My knowledge of Greek food is hardly Homeric. In fact, it’s barely fit to strum a note on that mandolin of Captain Corelli. That said, my most endearing memory of The Iliad is not the siege of Troy, or those feckless and fickle gods, rather the bit about ‘many a goodly ox, with many a sheep and bleating goat did they butcher and cut up; many a tusked boar moreover, fat and well-fed, did they singe and set to roast in the flames of Vulcan’. One of the great epic poems of world literature, and all I remember is their lunch. 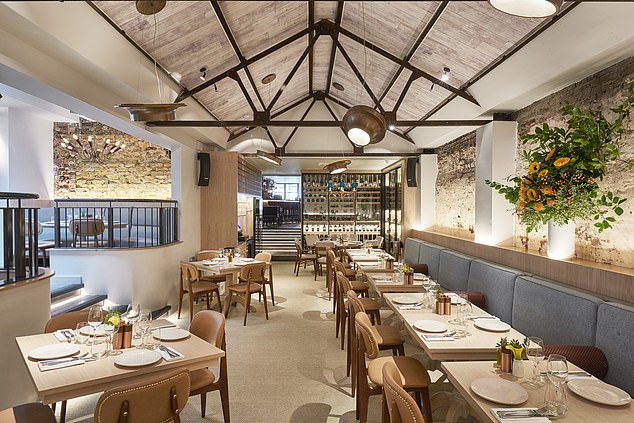 We sit in a long, barn-like room, with expensively rustic walls, and can just about hear the bad pop blaring out over the deafening hubbub

Then there’s Patience Grey’s Honey From A Weed, eternally elegant but assuredly unromantic, a beguiling mix of travel, autobiography and recipes, filled with tales of bitter Greek weeds (‘The more bitter the weeds the better, as far as the Naxians were concerned’), boiled, anointed with olive oil and vinegar, and eaten with hard-boiled eggs. She believed that the finest cooking ‘is the result of a balance struck between frugality and liberality’. And that ‘poverty rather than wealth gives the good things of life their true significance. Home-made bread rubbed with garlic and sprinkled with olive oil, shared – with a flask of wine – between working people, can be more convivial than any feast’.

She’s right, of course, although I’m not sure what she’d make of Meraki, a newish Greek restaurant just to the north of Oxford Street, opened by Arjun and Peter Waney, the siblings who brought us Roka (one of my favourite places in London), Zuma (equally good, but rather too many elderly men entertaining their ‘nieces’) and La Petite Maison.

None is cheap, and nor is Meraki, where Dover sole comes in at an epic £54, and a leg of lamb for £5 short of a ton. I don’t think Patience would approve.

We sit in a long, barn-like room, with expensively rustic walls, and can just about hear the bad pop blaring out over the deafening hubbub. There’s noisy, then there’s Meraki on a Wednesday night. It makes even The Wolseley seem muted. Halfway through dinner some fella sits down with a guitar and starts hammering out Van Morrison covers. I presume he’s been booked, but he could just be a well-oiled punter. He also might be rather good, but you can hardly make him out over the good-natured roar. Everyone here is having a grand old time.

We eat alabaster taramosalata, with the most subtle of smokes, piled thick on to warm pitta, before moving on to two real Greek classics, octopus carpaccio and prawn ceviche. Both are about as Greek as I am, although the octopus has admirable texture, hovering between robust and sighingly soft. And is beautifully presented, strewn with capers and onions, blobs of oil and a good crunch of salt. The ‘Like A Greek’ ceviche (really? why?) uses equally fine shellfish, gloriously fresh, sitting in a chilli-spiked bath of lime and orange. Again, it may not be all that Greek, but it is damned good. Just like the rosti ‘Greek style’, which comes topped with two expertly fried eggs and a honk of truffle and lashings of cream cheese Cretan butter.

There’s a sun-kissed Santorini tomato salad that whisks me straight back to that island. The intensity of the fruit is remarkable for this time of year, although, for £14 a bowl, it needs be touched by Zeus. Deep-fried soft-shell shrimps are excellent, every bit the equal of those I ate at Toula’s in Corfu, possessing the ephemeral sweetness of the truly fresh. But they’ve been decapitated, thus robbing us of the best bit of all.

Four charred lamb chops are up there with those Korean beauties at Roka. They bleat with deep ovine aplomb. The great Fay Maschler, queen of restaurant reviewers, and an expert on all things Greek, complained in her review that they removed all the fat. Thankfully, they took note (as they did of her other complaints), and the fat’s back. Hooray. 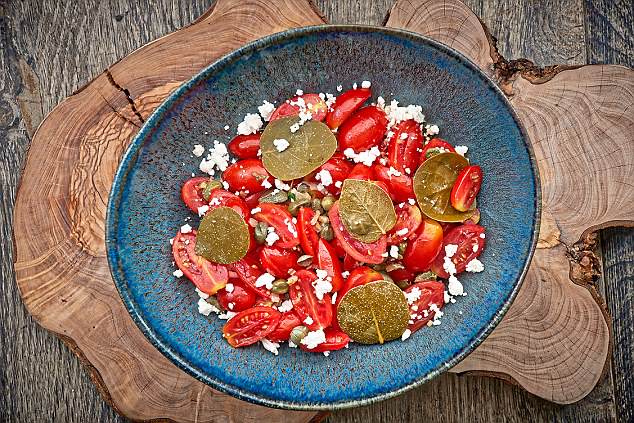 Santorini tomato salad. The intensity of the fruit is remarkable for this time of year, although, for £14 a bowl, it needs be touched by Zeus

A plate of horta greens (or weeds, for that’s what they are) have a bracing bitterness lifted by a whack of lemon juice and the merest hint of dill. Patience would most certainly approve, as she would of a magnificently crisp, minerally Assyrtiko white from Santorini, further proof as to the ever-increasing quality of Greek wine. It’s a long way from Retsina. And Meraki is a long way from the clichéd Greek places of old, with their slimy dolmas, fluorescent pink tarama and calamari clad in bulletproof batter. The only thing smashed here is your credit card limit. But although the crowd is skewed towards the late middle-aged cashmere-clad, the cooking can be very good indeed.

It’s like a taverna that’s left the islands, travelled the world and made its fortune, before coming home to wallow in a mixture of nostalgia and current culinary trends. The Waneys know their market well, and you could hardly fit another pitta, yet alone person, in the room.

Those in search of rustic Greek authenticity will not be amused. Nor would Patience Grey. But we had a blast. Just make sure someone else foots that bill.

Cheese fondue at Hus 8 in Zürs for lunch. And the usual pickles and potatoes. If you cut me, I’d bleed Gruyère.

We take skidoos up to Alpele, a tiny Alpine restaurant above Lech. Where we eat, yup, you’ve got it, peerless cheese fondue, plus fondue Bourguignon and Chinoiserie.

Back to London and Xio Long bao buns and XO rice at Shikumen.

Roast chicken and roast potatoes for lunch. I suggest fondue for dinner. Am ignored.