No evidence of Russian interference in Brexit via Facebook, says Clegg

Former deputy prime minister Sir Nick Clegg claimed his new paymaster Facebook was the victim of an anti-digital ‘techlash’ today as he warned governments against action that let China dominate the internet.

The ex-Liberal Democrat leader, who shocked Westminster when he landed a £4million job as spin chief for the US social media giant last year, was responding to critics who believe the media behemoth should be broken up.

He warned those critics that it would not solve issues like privacy or alleged use of the platform to influence elections.

He used an interview with the BBC to dismiss claims Russia used it to influence the Brexit referendum, insisting there was ‘no evidence’ that it had happened.

‘I think the pendulum has swung really quite rapidly from the tech utopia, the tech euphoria of a few years ago when people like Mark Zuckerberg could do no wrong,’ he said.

‘It’s now swung the other way to a sort of tech phobia where people like Mark Zuckerberg can do no right.

‘The danger is if that techlash topples from scepticism about tech into outright phobia of it, I think we end up with the risk that we throw the baby out with the bathwater and we make it almost impossible for tech to innovate properly.

‘Crucially, let’s remember you have this battle for tech dominance between the United States and China. In China there is no compunction about how data is used, there is no worry about privacy legislation, data protection and so on.’

Sir Nick, a prominent member of the Remain campaign in 2016, suggested that people who thought it had been used to influence the referendum were indulging in a conspiracy theory.

Sir Nick Clegg who lost his Sheffield Hallam seat to Labour’s Jared O’Mara at the 2017 election, is the most senior politician from Europe to work for Facebook.

But he has not always been so keen on the social media behemoth.

In a 2016 article for the Evening Standard he said he was ‘not especially bedazzled’ by Mark Zuckerberg’s all-consuming enterprise.

The former deputy prime minister wrote: ‘While I have good friends who work at the company, I actually find the messianic Californian new-worldy-touchy-feely culture of Facebook a little grating.

‘Nor am I sure that companies such as Facebook really pay all the tax they could — though that’s as much the fault of governments who still haven’t got their tax act together.

‘The jiggery-pokery of tax planning by the large multinational tech companies is also guaranteed to inflame public opinion.

‘It may all be impeccably legal but the impression that less tax is being paid than can reasonably be expected remains.’

He also dismissed claims that Cambridge Analytica swayed people’s decision to vote Leave three years ago, despite the fact that up to 87 million people are believed to have had their data harvested by the political consultancy via a personality quiz app.

Sir Nick told BBC Radio 4’s Today that Facebook had carried out analyses of its data and found no ‘significant attempt’ by outside forces to influence the referendum result.

He said: ‘I’d accept we need to act but there is absolutely no evidence that it happened in the Brexit referendum.

‘We ran two full analyses of all the data we had in the run up to the Brexit referendum, we shared all of this information with the select committee in Westminster and elsewhere.

‘We have found no evidence of a significant attempt by outside forces.’

Sir Nick was hired by billionaire Mark Zuckerberg to head up Facebook’s global lobbying team last October after ‘months of wooing’ by the social network’s founder.

He took over from PR chief Elliot Schrage, who quit in June 2018 after a series of damaging scandals.

His giant pay packet is not unusual for the ‘big tech’ industry, but dwarfs his recent MP’s salary of £77,379.

His role sees him lobby in Europe and the US where Facebook faces probes over its tax affairs and data breaches including the Cambridge Analytica scandal where app developers harvested information from millions of accounts.

He also defended his decision to take the job that saw him swap Westminster for the West Coast, saying he had ‘always believed in grappling with difficult stuff’.

Asked about his decision to take the job after being in the heart of the UK government for five years he said: ‘If there is any similarity between my choices in politics and my very different life now, it’s that I’ve always believed in grappling with difficult stuff.

‘It’s so much easier to throw rocks at stuff and yell at it.

‘I totally get it that some people don’t like me for having done that in politics, just as much as now.

‘I just kind of think this collision between the world of tech and our society is so important and I would just rather engage with it rather than try and ignore it.’

Sir Nick said today he had ‘heard it claimed’ that Facebook data had been used by Cambridge Analytica during the 2016 EU referendum.

‘In fact the watchdog, the UK watchdog, which has the data, we don’t, we can’t even analyse the data because haven’t got access to it, have said in terms that there was no raw data from Facebook on the servers of Cambridge Analytica,’ he told the BBC.

‘But more than that they confirmed before that no UK voters’ Facebook data was involved.

A relationship that started with joy in the rose gardens of Downing Street in 2010 ended in humiliation for the Lib Dems as they were routed in the 2015 election.

He resigned as leader and returned to the backbenches.

A year later, following the EU referendum, he became the party’s Brexit spokesman but then lost the Sheffield Hallam seat he held for 12 years in 2017.

The arch Remainer was among a number of Lib Dems showered with honours in recent years, with knighthoods for Vince Cable and Ed Davey, who both lost their seats in 2015 after serving in the Cabinet.

He has called for a second referendum and written a book called How To Stop Brexit.

He surprised UK politics by taking up the job with Facebook last year – moving full time to San Francisco in the new year.

‘So yes, Facebook has a heavy responsibility to protect the integrity of elections from outside interference.

‘I also think we have a duty to explain facts from some of the allegations that have been made.’

Numerous prominent Remain campaigners and senior political figures have suggested Russia helped to sway the result of the 2016 vote.

Some have even called for a public inquiry into the matter.

Sir Nick, an ardent Remainer, was asked if such claims were a ‘myth’ and a ‘conspiracy theory’ and he responded: ‘Yes.

‘I am someone who was debating with Nigel Farage before Facebook was invented and much though I understand why people want to reduce that eruption in British politics to some kind of plot or conspiracy or some use of new social media through opaque means, I am afraid the roots to British Euroscepticism go very, very deep.

‘Candidly, over the last 40 years, have been much more influenced by traditional media than they have the new media.’

In February, the House of Commons Digital, Culture, Media and Sport Committee published a report on disinformation and fake news.

The 18-month inquiry looked into the effects of social media on society, Facebook’s handling of users’ data and allegations that the official Brexit campaigns broke electoral law during the referendum. 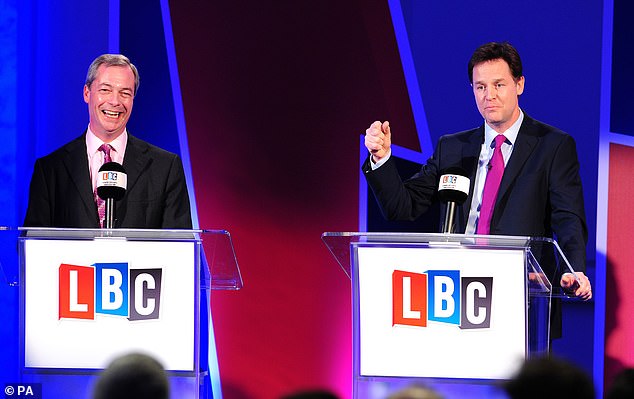 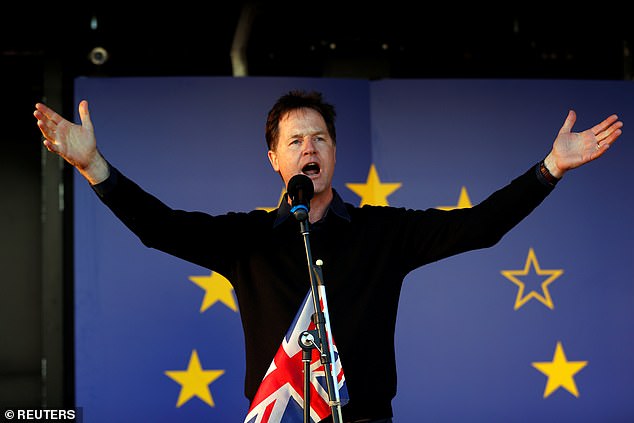 Even after the 2016 referendum result the former Liberal Democrat leader battled to keep the UK in the bloc. He is pictured addressing a Unite for Europe rally in central London in March 2017

MPs have called for greater regulation of tech companies and Sir Nick said implementing new rules was not something they ‘can or should’ do on their own. 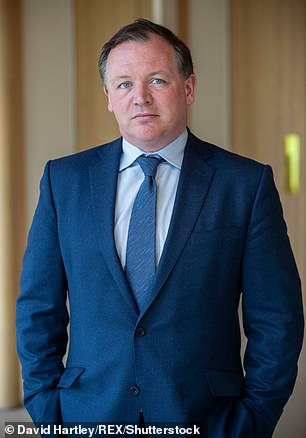 ‘It’s not for private companies, however big or small, to come up with those rules. It is for democratic politicians in the democratic world to do so,’ he said.

The chairman of the Digital, Culture, Media and Sport Committee Damian Collins said Sir Nick was wrong to say there was no evidence that Russia used Facebook to interfere in the referendum.

Also appearing on the BBC he said: ‘He is technically wrong on that point which he should know.

‘We asked Facebook whether there was any evidence of Russians buying ads during the referendum. There was – which they shared with us – on a very small scale, but nevertheless it was there.’