Women across the UK have been left with overgrown fringes and longer locks than usual due to hairdressers being closed during lockdown – and the Duchess of Cambridge is no different.

Kate Middleton, 39, showed off noticeably longer hair during her most recent virtual engagement.

Her brunette locks cascaded over her left shoulder as she chatted to nurses from the University Hospitals Coventry and Warwickshire NHS Trust via video link on Thursday to hear about their work and thank them for their efforts.

The Duchess, who is in lockdown with her family at Anmer Hall, in Norfolk, is setting an example by doing her own hair and letting her style grow out, explained celebrity stylist James Johsnon.

Lockdown locks! Kate Middleton, 39, showed off noticeably longer hair during her most recent virtual engagement. She joined NHS staff on a video call to thank them for their hard work 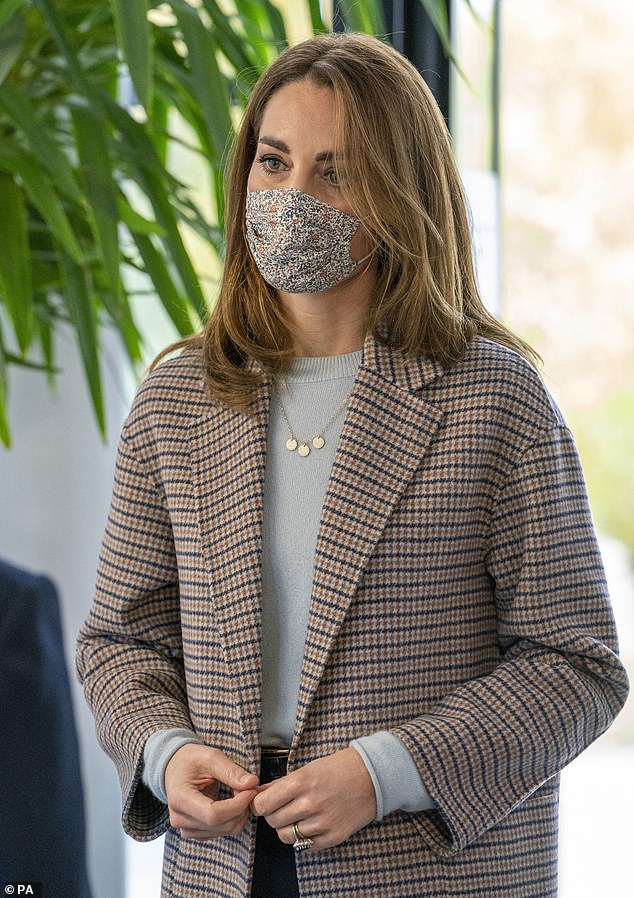 Shorter style: The Duchess of Cambridge had a choppier, shorter style in October when she visited students at the University of Derby. A stylist said Kate is ‘setting an example’

‘Fewer trims has given her hair time to grow to grow, and no doubt having less styling has encouraged her hair to look healthy!,’ he told Femail.

‘Just like many at the moment, I think the lockdown has forced many into trying new styles they wouldn’t normally do prelockdown, the longer grown out hair really suits her.

‘Less movement and flicky is bang on trend, proving again why she’s a hair icon.’

The Duchess of Cambridge’s hair was looking longer before Christmas but she wore it in voluminous curls that made it look shorter than it was.

Straightening the hair, as she did in the most recent video call, reveals the full length.

The Duchess of Cambridge looked business ready for the video call with NHS staff on Tuesday, wearing a crisp white shirt under a classic blazer.

In keeping with the ‘less-is-more’ styling approach, Kate kept her accessories simple and added a delicate necklace and pair of simple drop earrings. 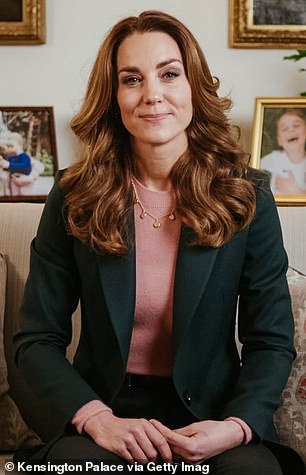 Curly Kate! The Duchess of Cambridge’s hair was already looking long in November (left) and December (right) but appeared shorter due to the voluminous curls 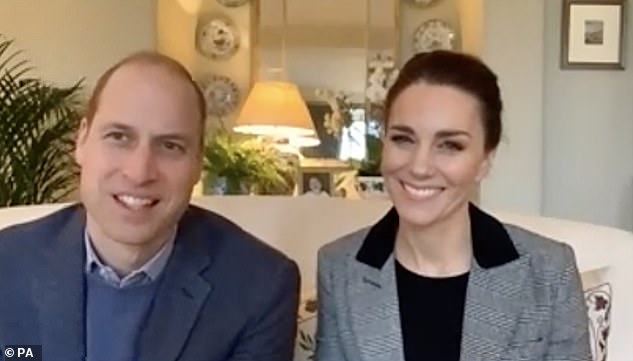 Fuss-free style: The Duchess of Cambridge pulled back her hair when she joined Prince William for a video call earlier this month (pictured)

During the call, Kate heard the touching story of a senior nurse who held the hand of a dying patient and played his favourite band Bon Jovi after his wife could not make it to his bedside.

Kate praised Vasu Lingappa for going the ‘extra mile’ and shared a lighter moment with the NHS worker who joked the patient’s wife had wanted him to sing the rock group’s hits – but he declined because of his strong Asian accent.

She made the call from the Queen’s Sandringham estate on Tuesday, after the monarch loaned her and Prince William the residence to use as their working base during lockdown.

The grand estate in Norfolk is currently empty as the monarch and Prince Philip are at Windsor for lockdown and it is not open to the public.

The Duke and Duchess reside down the road with their children at the 10 bedroom Anmer Hall but have set up a small temporary office with their staff at Sandringham. 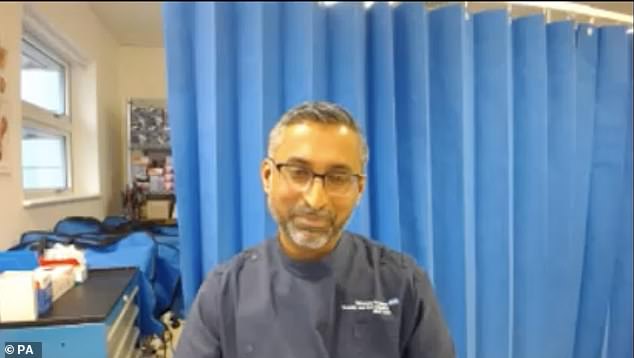 Dressed in a smart black blazer teamed with a white blouse, Kate, 39, spoke to nurses from the University Hospitals Coventry and Warwickshire NHS Trust via video link (above) to hear about their work and thank them for their efforts during the pandemic

During the call, Mr Lingappa, a critical care outreach practitioner, told the duchess: ‘A lot of people are dying and we normally have families surrounding them during the last hour, but we’re not able to do that.

‘And if I can give you a little example, we had a gentleman and unfortunately he was dying, so we spoke to his wife and she said, ‘I can’t come to see (him) but can you make sure you sing Bon Jovi and hold his hand?’.

‘And I said, “If I sing Bon Jovi in my accent. It won’t be appropriate”. So I took my phone out and played a YouTube video of Bon Jovi and I held his hand.’

He went on to say: ‘It’s been tough, but like I said earlier, I’m surrounded by some amazing people with lots of skills and inspirational stories.

‘We are nurses (some) working in critical care for 30 years, 35 years, 40 years – so there is nothing they haven’t seen, but this is unprecedented.’

After hearing the emotional story, Kate told the nurses: ‘You hear time and time again about the amazing things nurses up and down the country are doing – going that extra mile.

‘I think that’s what matters so much now, these acts of kindness to the patients you’re looking after, that are in your care, that family members aren’t able to be there, but you are going that extra mile and being there.’