Noel Clarke, who was accused of sexual misconduct, says he’s been welcomed back to industry events

British actor and director Noel Clarke, who was accused of sexual misconduct by multiple women in 2021, has revealed he’s been invited to be on two film panels, and has been welcomed back to industry events.

Clarke, 47, who shot to fame thanks to the The Hood Trilogy, and appeared in Doctor Who, says he was ‘ready for war’ after deciding to attend the industry event this week – but says instead he encountered ‘love’.

He told his 250,000 Twitter followers he had attended with his youngest child, saying: ‘There were agents, actors, directors etc there. Tbh I was ready for war. Ready for the side eyes but it was all love and very, very, very interesting conversations.’

He also denied that he was involved in the forthcoming 60th anniversary celebrations of Doctor Who – a series of specials written by Russell T Davies will air in November, saying the BBC wouldn’t ask, and he wouldn’t accept if they did.

In a scathing tweet against his former employer, Clarke, who played Mickey Smith in  in 2005 and 2006, wrote: ‘I most definitely am not. I love Russell and the team. But the Savile protecting channel hasn’t and wouldn’t ask me and I would not do it if they did.’

Actor Noel Clarke, best known for acting in Doctor Who and co-creating The Hood Trilogy, was accused of sexual misconduct by more than 20 women in 2021 . No criminal charges were brought against him. This week, he revealed he’d received a warmer than expected welcome at an industry event

In February 2021, Clarke was accused by more than 20 women, who knew the star in a professional capacity, of sex offences in an article published by The Guardian.

The allegations – spanning a 15-year period – included claims of unwanted touching or groping, sexually inappropriate behaviour and comments on set, the covert filming of a naked audition and the sharing of explicit pictures without consent.

In a statement at the time Clarke said he ‘vehemently’ denied ‘any sexual misconduct or criminal wrongdoing’ and no criminal charges have been brought against him. 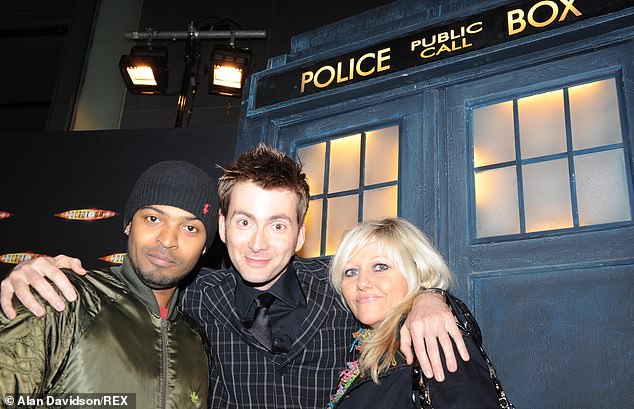 Clarke played Mickey Smith in the first two series of the revival of Doctor Who in 2005 and 2006…in a scathing tweet, the actor said he hadn’t been asked to appear in the forthcoming 60th anniversary celebrations of the show – and wouldn’t do it anyway (with Doctor Who co-stars David Tennant and Camille Coduri in 2007) 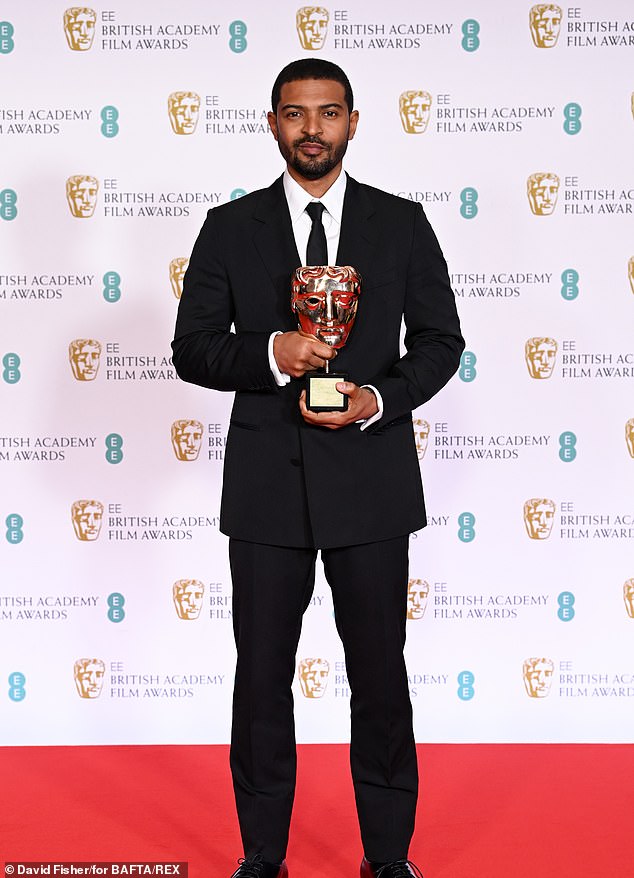 Clarke pictured receiving an Outstanding British Contribution To Cinema award at the BAFTAS in 2021, just days before The Guardian published an article with accusations by women who he’d worked with saying they’d experienced sexual misconduct

He added that he was ‘deeply sorry’ if some of his actions had affected people ‘in ways I did not intend or realise’, and vowed to get professional help ‘to educate myself and change for the better’.

Posting on Twitter and Instagram in recent weeks, he’s been frank about the abuse on social media he still receives following the allegations – and regularly combats with critics on the social media platform.

Last week, he wrote: ‘Feel like people think they can just say whatever they want now I’m this cartoon villain. Gonna be correcting a lot of things soon. Love and light to all who just wanna, enjoy their time.’

In an interview with the Mail on Sunday last year, Clarke said he’d contemplated suicide following the allegations.

‘Twenty years of work was gone in 24 hours. I lost everything,’ he told the newspaper, adding that his career has been cancelled by the allegations.

‘The company I built from the ground up, my TV shows, my movies, my book deals, the industry respect I had. In my heart and my head it has damaged me in a way I cannot articulate.’ 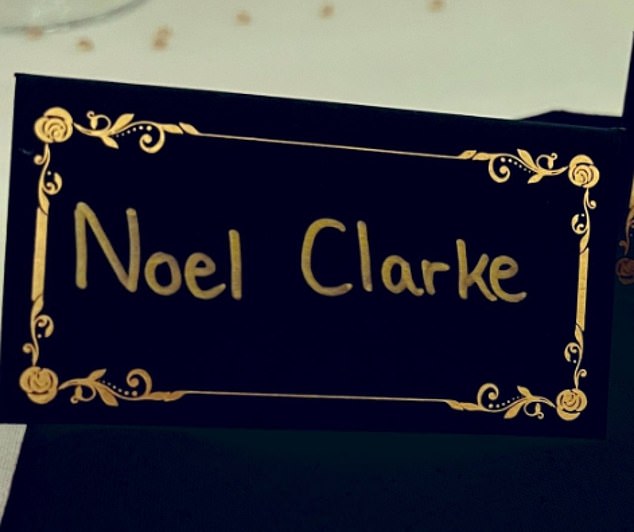 Clarke posted a photo of his name card from the event, which he attended with his youngest child this week 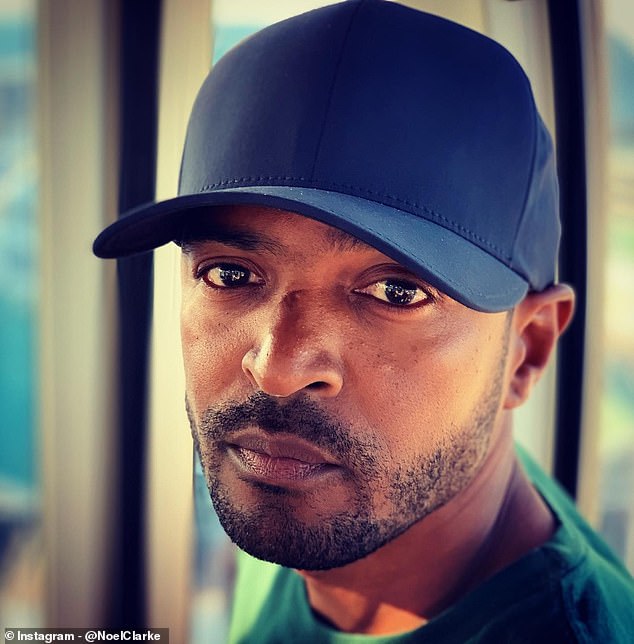 After a period away from the spotlight, the actor, who said he contemplated suicide after he was ‘cancelled’, revealed he’s writing new material

Following the allegations against Clarke, ITV pulled the concluding episode of drama Viewpoint, in which he starred, and broadcaster Sky, which had aired Clarke’s series Bulletproof, said it was halting work with him.

Bafta also suspended his membership of the organisation and his outstanding British contribution to cinema award, which he had been given in 2021.

In March this year police said no criminal investigation would be launched in relation to sexual offence allegations made against him.

Scotland Yard said in a statement in March 2022 that there had been a thorough assessment by specialist detectives, but it was determined the information would not meet the threshold for a criminal investigation. 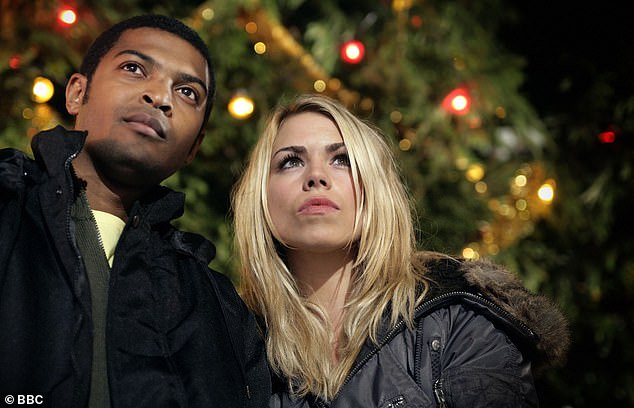 Clarke pictured with Billie Piper in Doctor Who in 2005

The statement said: ‘We have shared our findings with the third party organisation and updated the complainants who subsequently contacted us following the initial report.

‘If any further criminal allegation related to those already assessed are reported then it will be thoroughly considered.’

In the past year, Clarke and his wife Iris, who have been together for two decades, have had a new baby they haven’t dared tell anyone about. Financially the family has been left ‘running on fumes’. Most seriously, at his lowest, Clarke was suicidal.

He said: ‘I didn’t care about anything. My mind was destroyed.’

He said he pocketed a folding hunting knife bought as a souvenir while filming Auf Wiedersehen, Pet in Arizona 20 years ago and planned to cut his own throat.

‘I needed to do something unsurvivable,’ he said. ‘I was reaching for a book and the knife fell out of my pocket. My 11-year-old said, ‘Daddy, why have you got that?’

‘I said, ‘It’s just to pick the dirt out of my nails…’ And he said, ‘Oh, OK,’ and somehow the ordinariness of that snapped me out of it. Up to that point, I had been waiting for the right moment to kill myself. I was out of here. Done. I didn’t care about anything. My mind was destroyed.’

The father-of-four also said: ‘I’m not a predator. I have crossed the road to avoid walking behind women since I was 15 years old.’

He continued: ‘I’ve been a regular dude, for sure, I flirt. Have I ever made a saucy comment? One hundred per cent. But not to the extent that it warranted the destruction of my life.

‘I can’t say I never talked about sex at work. We’re adults in a workplace and people make jokes and have conversations with each other that cross the line.’

One of Clarke’s first TV appearances was in Channel 4 series Metrosexuality, and he went on to garner fame for his roles as Mickey Smith in Doctor Who and Wyman Norris in Auf Wiedersehen, Pet.

He later wrote and starred in the acclaimed film trilogy Kidulthood, Adulthood and Brotherhood, and directed two of them. He was first recognised by Bafta in 2009, when he won the Rising Star prize.

Last year, Clarke, revealed he wanted to rebuild his career with a new TV pilot and asked new writers to collaborate with him.

For confidential support, call the Samaritans on 116123 or visit a local Samaritans branch. Click here for details