Noel Mackin shows off collection of model ships and planes

For more than 45 years Noel Mackin from Sydney’s west has dedicated most of his spare time to building model planes and boats.

He now boasts a huge collection of more than 320 models at home, but says he couldn’t have done it without his wife Joy, who, he believes, is ‘the most patient woman in the world’.

He still remembers his first model airplane. He was six years old when his father gave it to him, and had been obsessed with aircraft since visiting a local airstrip.

The passion has shaped his life, home and marriage -and his wife Joy doesn’t mind.

‘My friends and I had a long-standing joke – whenever I bought a new model I would say I had to wait until Joy was sleeping before I got it out of the car so that I could slip it onto the pile without her noticing,’ he told Daily Mail Australia.

His friends proudly boast of the huge collection, as well. ‘It needs to be seen to be believed – it is floor-to-ceiling, amazing,’ one said.

The models, which are all scale replicas of real planes and ships, are displayed in the living areas of the house and in his purpose-built workshop.

‘I have made about 600, I think, over the years but I do give the older ones away.

‘I don’t want to take over the house with them – I don’t think that would be appropriate.’ 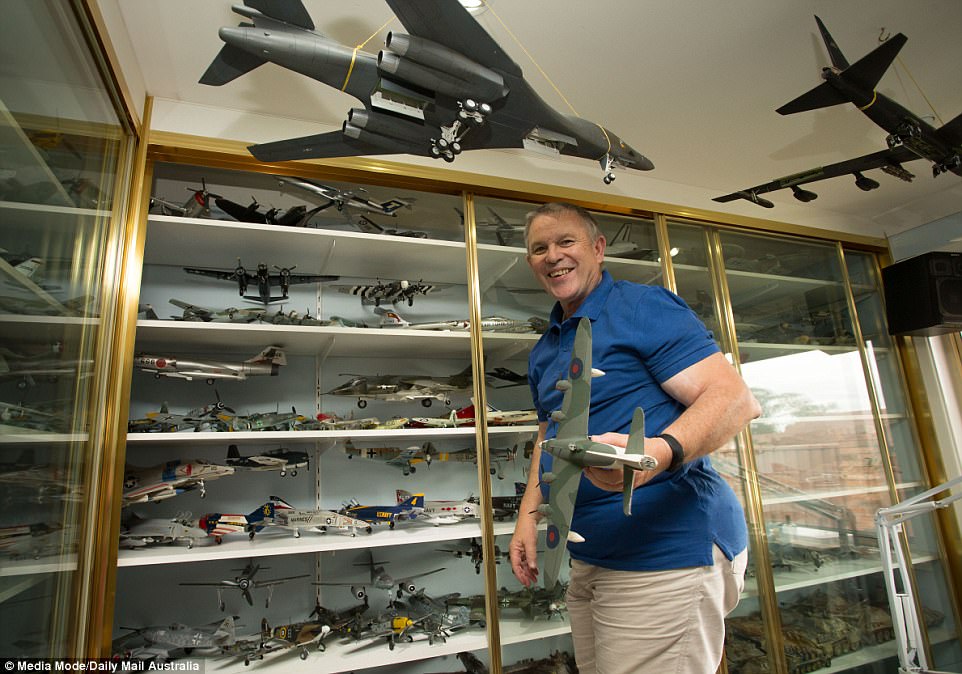 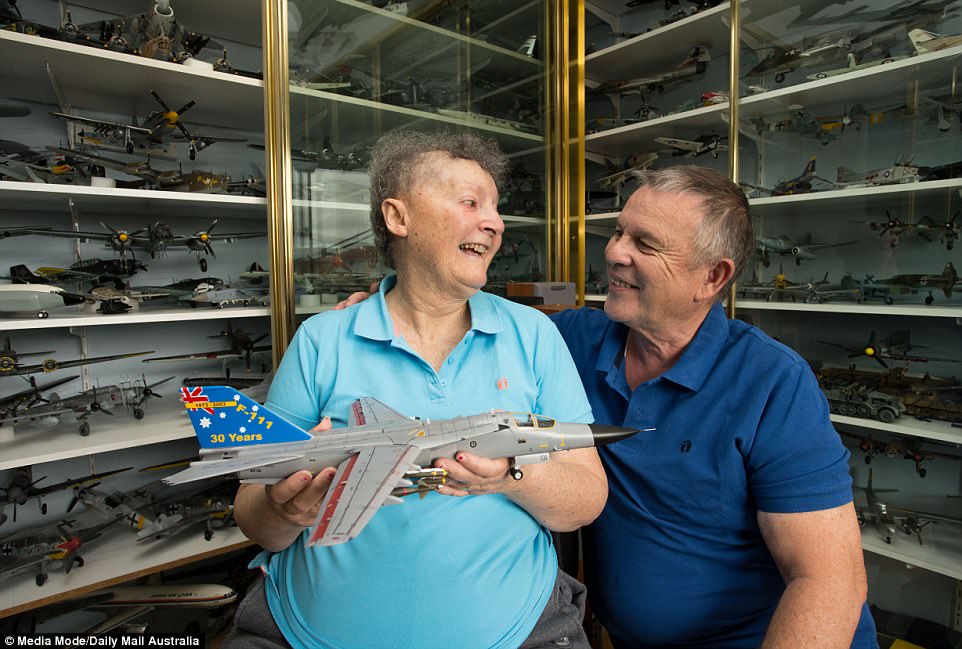 He says his wife Joy – pictured here with her favourite plane, the F-111 – is ‘the most patient woman in the world’ 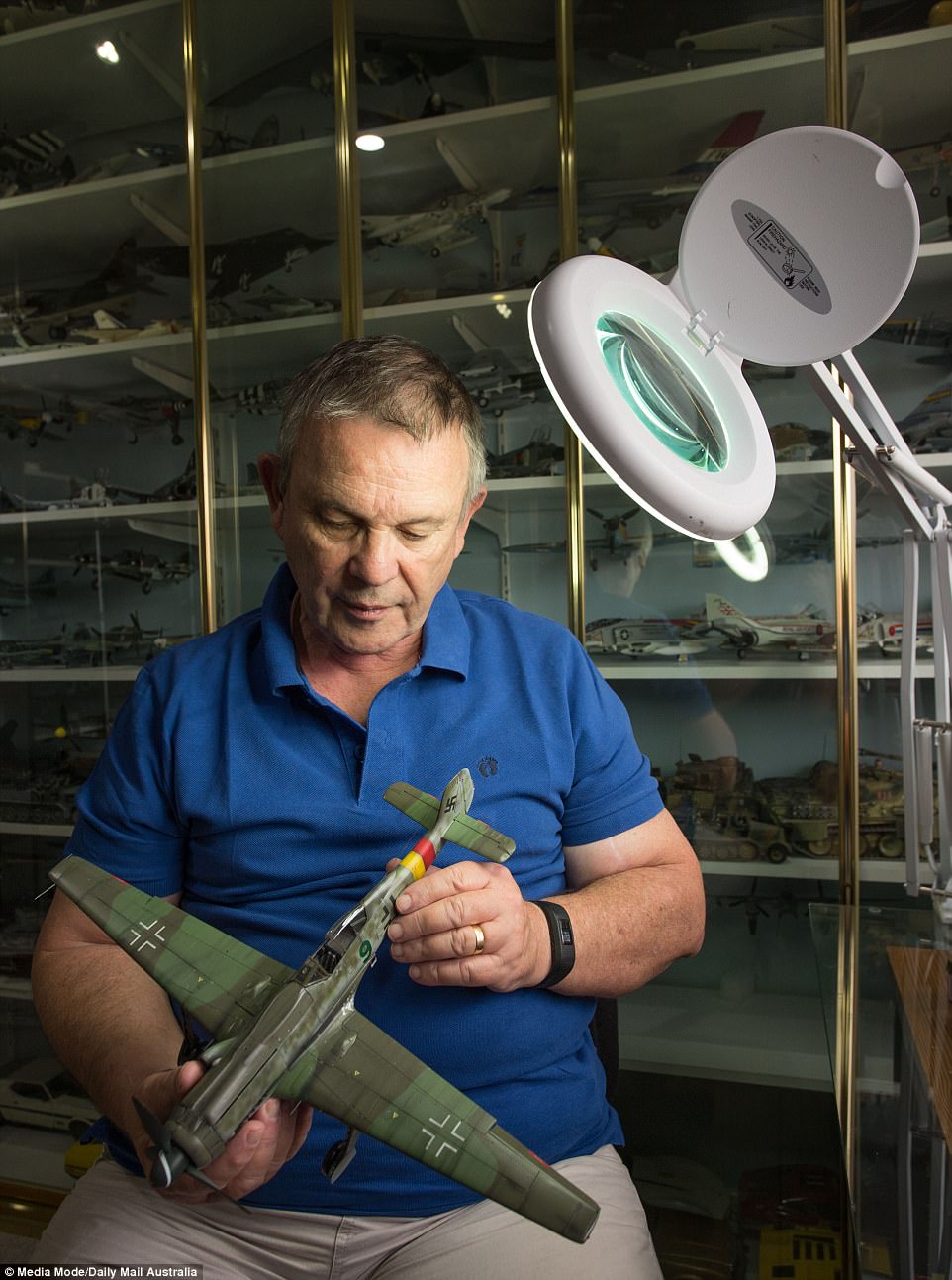 The model master spends five hours a day on his scale replicas – some take a month to make, others can take four

It appears while Joy is okay with her husband’s hobby – which he tends to for five or six hours a night – she thinks she might be the reason the models haven’t spread further.

‘You almost took over the house with them,’ she said.

The models take between one month and four to make, with the larger, more detailed ones proving particularly challenging.

‘It is an outlet for me and I enjoy doing it – I take my new models to the modelling club in Sydney every month and often win awards for them,’ he said.

‘It has been the standard for them to ask me what I have planned for the next meeting.

‘I suppose I have been able to do it for so long because most people start as young men and then stop when they have children – before starting again when they retire.

‘I didn’t have children so I never had to stop.’ 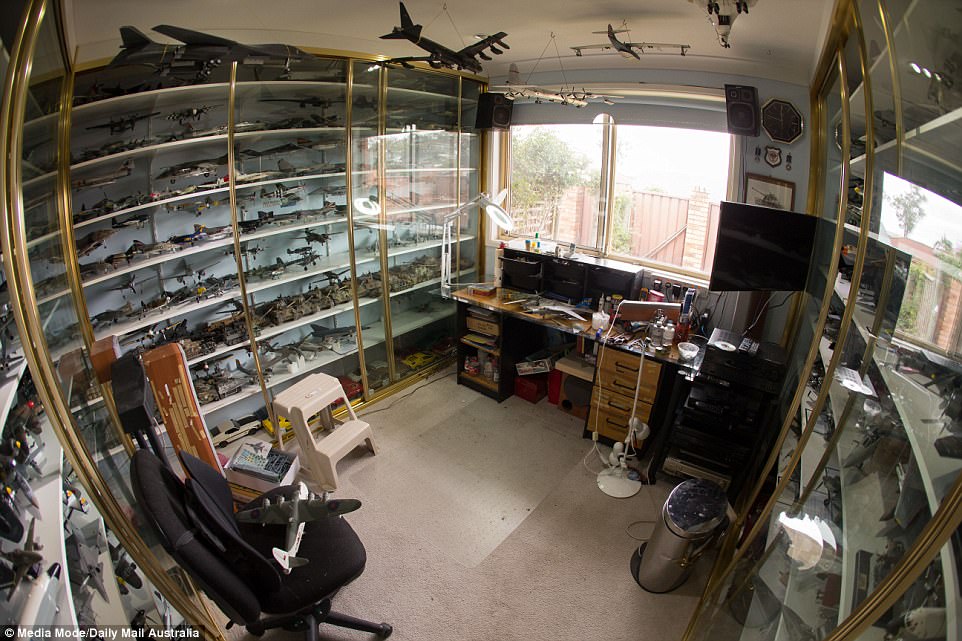 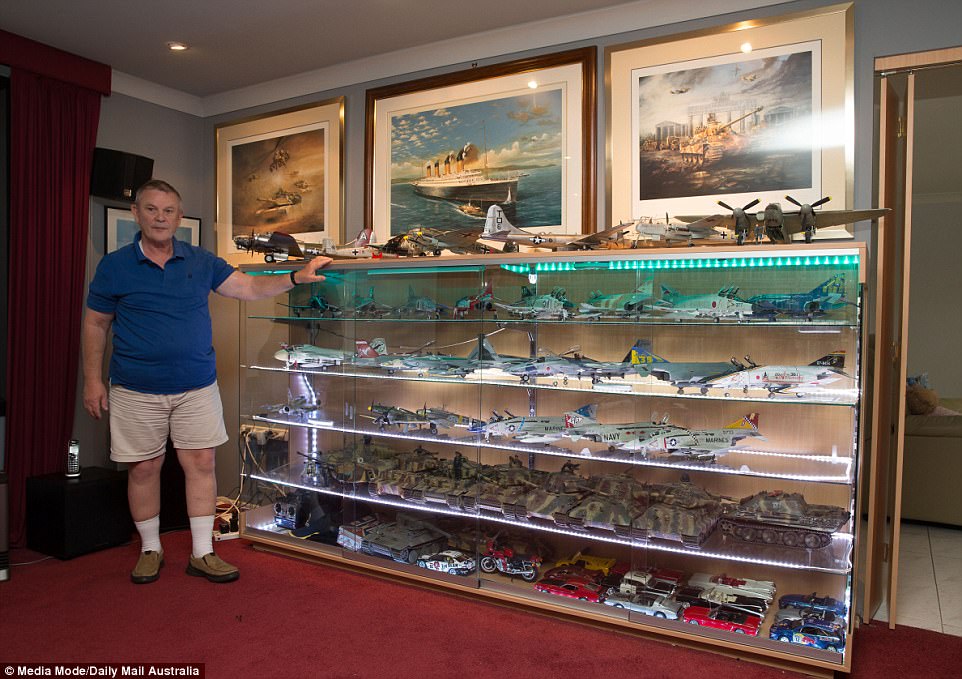 Another display in a living area. A friend of Mr Mackin’s painted the pictures to the left and right of the display cabinet 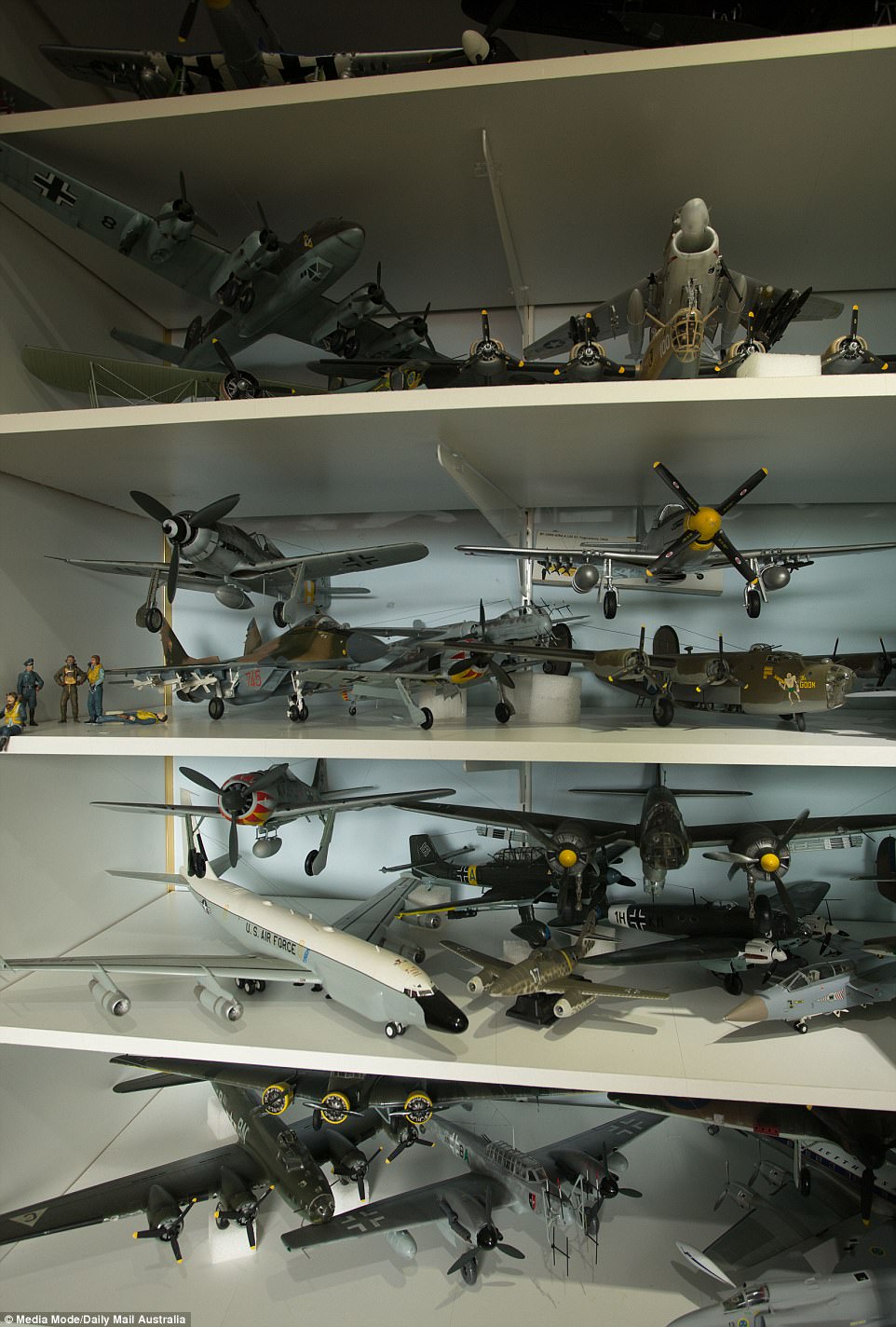 A lifelong fan of planes, Mr Mackin got his first model as a six-year-old after going to an airstrip with his father 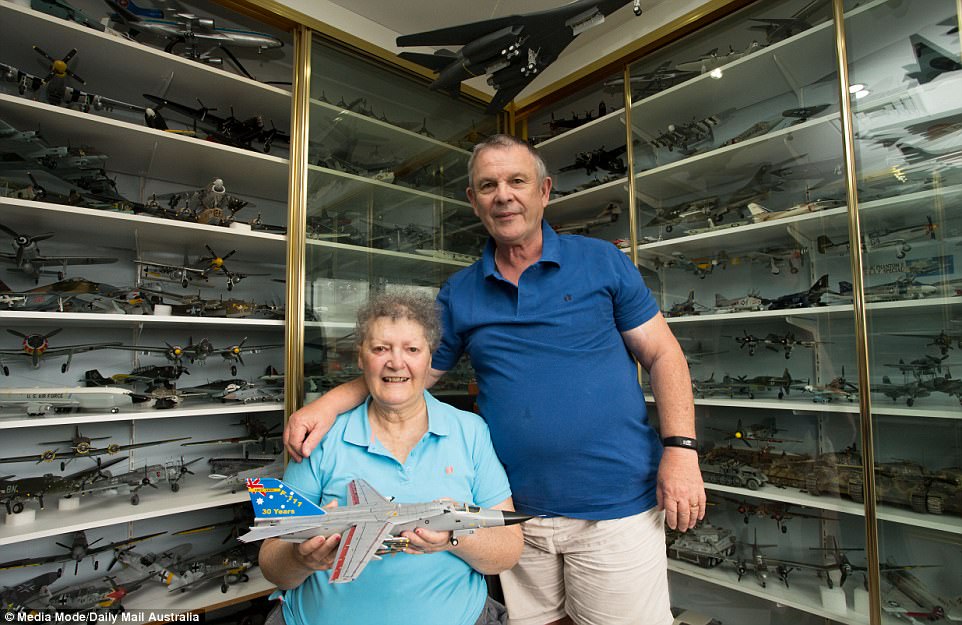 And it is easy to ‘keep collecting’, Noel says, because manufacturers don’t make many of each run which means there is a sense of urgency to get new products the moment they hit the shelves.

‘When you like something, you have to buy it because it might not be there for long and once it is gone you will miss out,’ he said.

Mr Mackin has ‘probably spent $50,000’ on his hobby over the years – but says once the models have been built they lose their value. 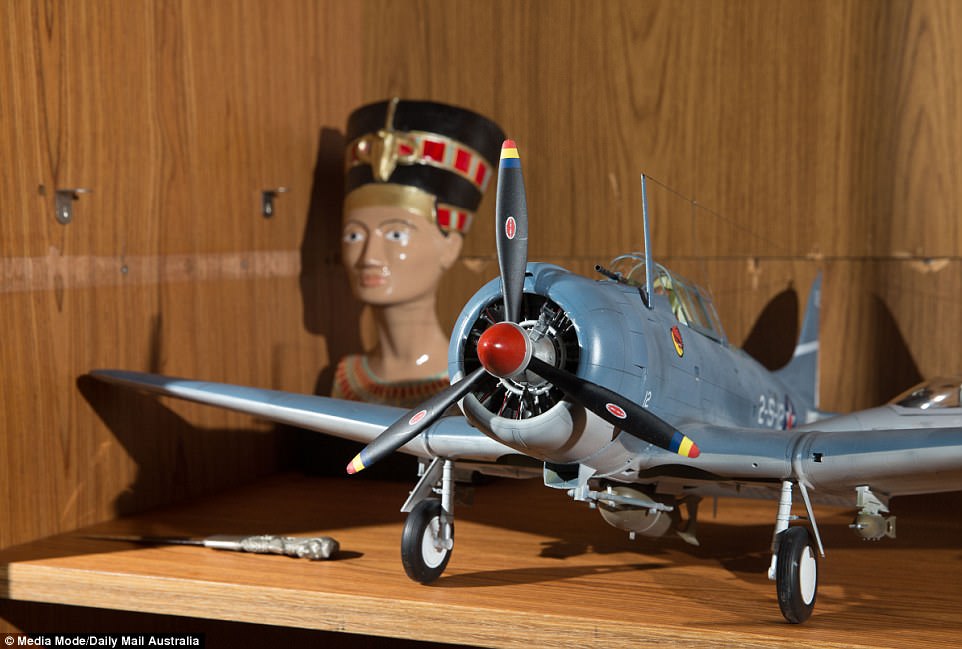 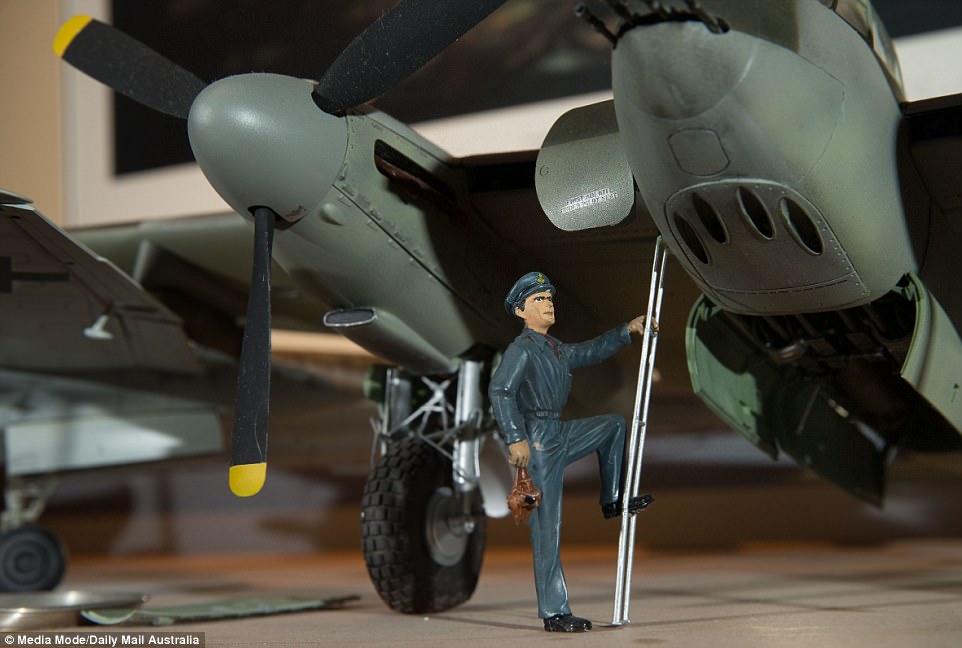 ‘If you like it you buy it or you could miss out,’ he said. Some of the aircraft are scaled against people 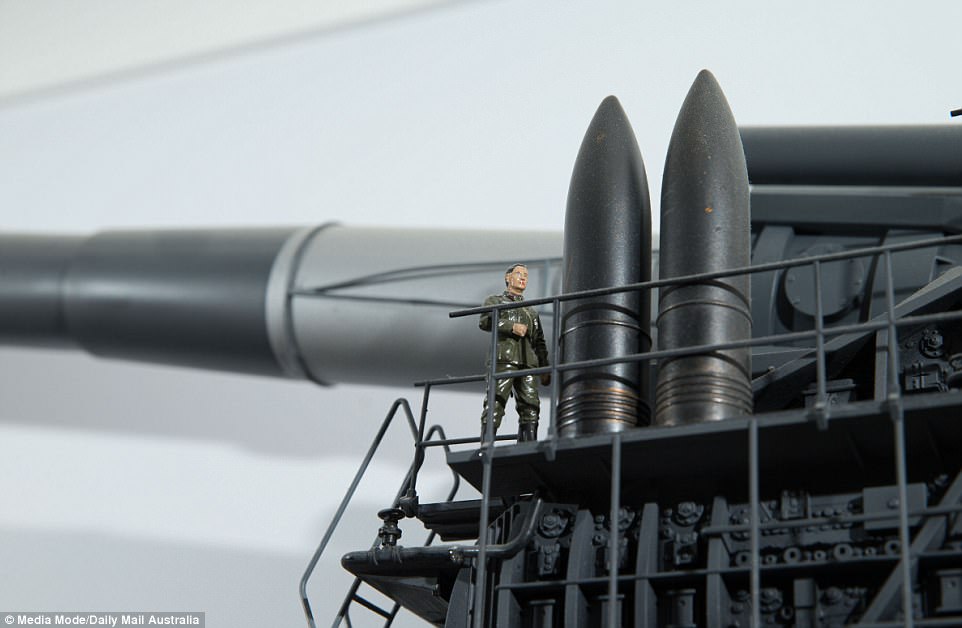 This tank model is two metres long and includes railway track, men and shells – all in scale 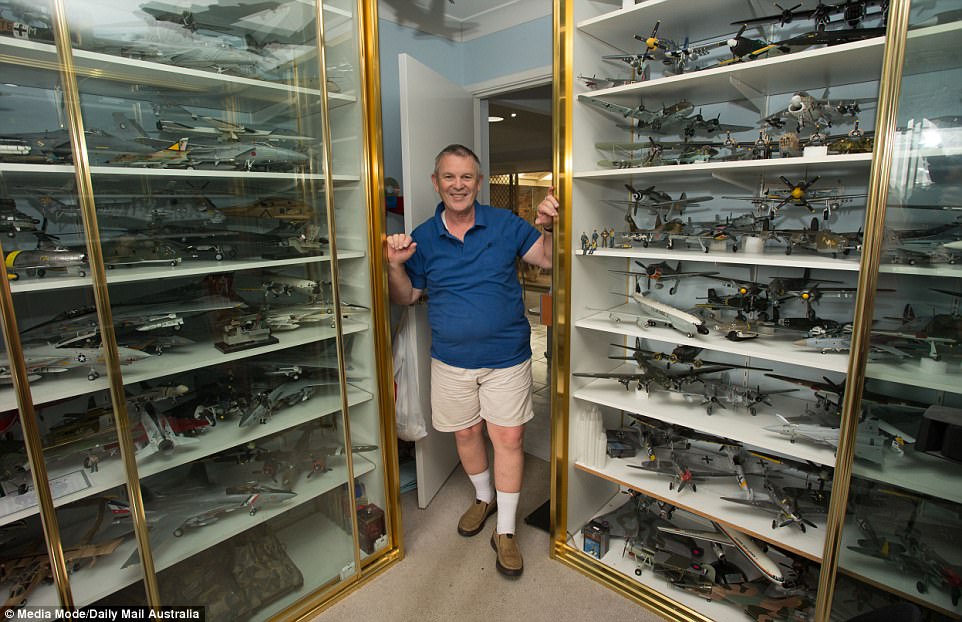 Mr Mackin said he has ‘probably spent $50,000’ on his hobby over the years – but explains that once the models have been built they lose their value

‘They are only worth money when they are still in the box – but that isn’t the reason I do this anyway – I just love it.’

His favourite model is the F4 Phantom – he has several large versions of the ‘workhorse’ plane, and 30 smaller versions of the aircraft which was made popular during the Vietnam War.

‘But I really like anything of historic value – it is the history I really enjoy.’

One of his model seaplane models is 45 years old – he was a novice when he put it together and doesn’t approve of how it was finished off.

‘I didn’t paint the plastic because it was already white – it is a sub-standard job. 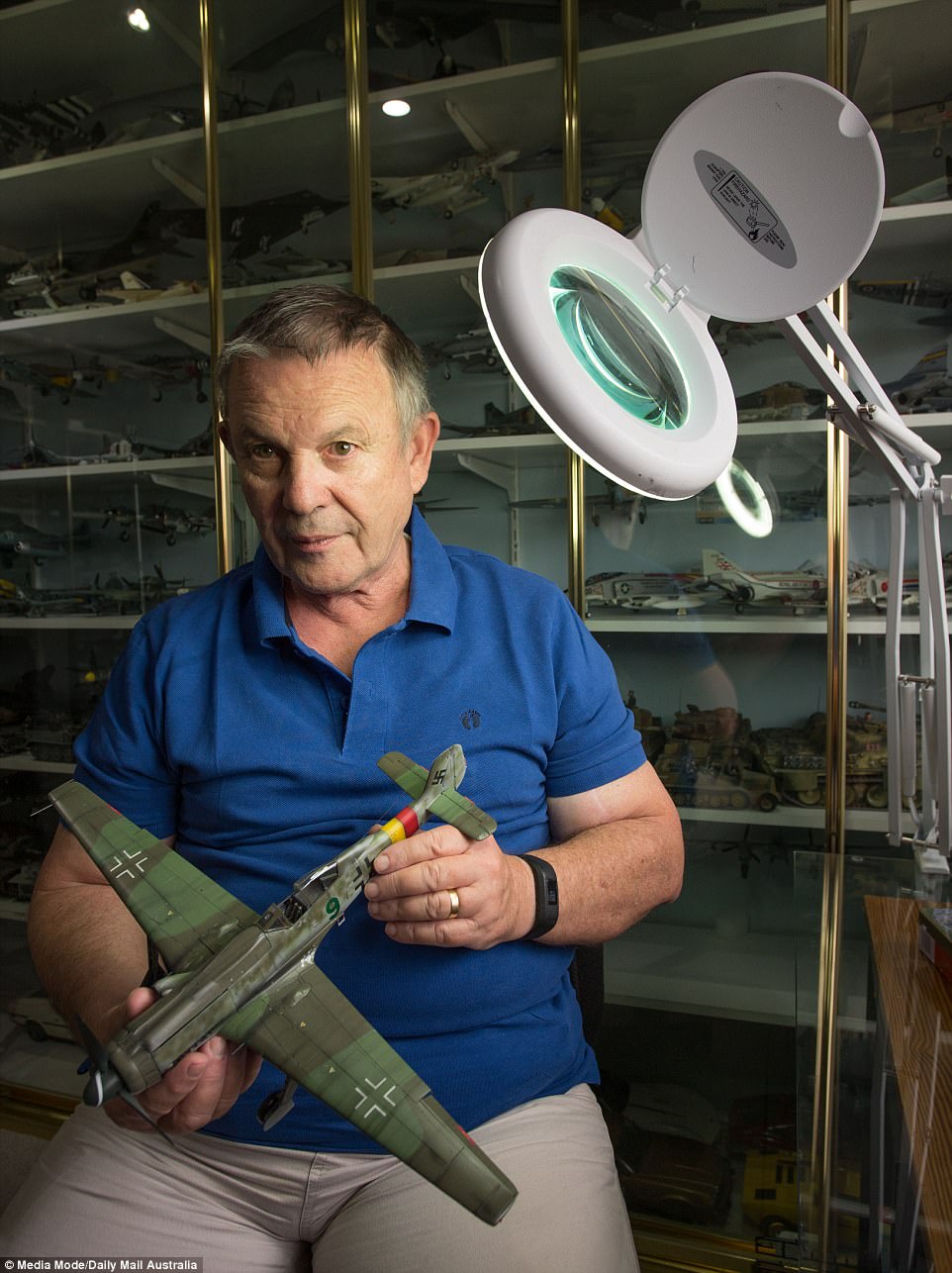 ‘They are only worth money when they are still in the box. But that isn’t the reason I do this anyway – I just love it’ 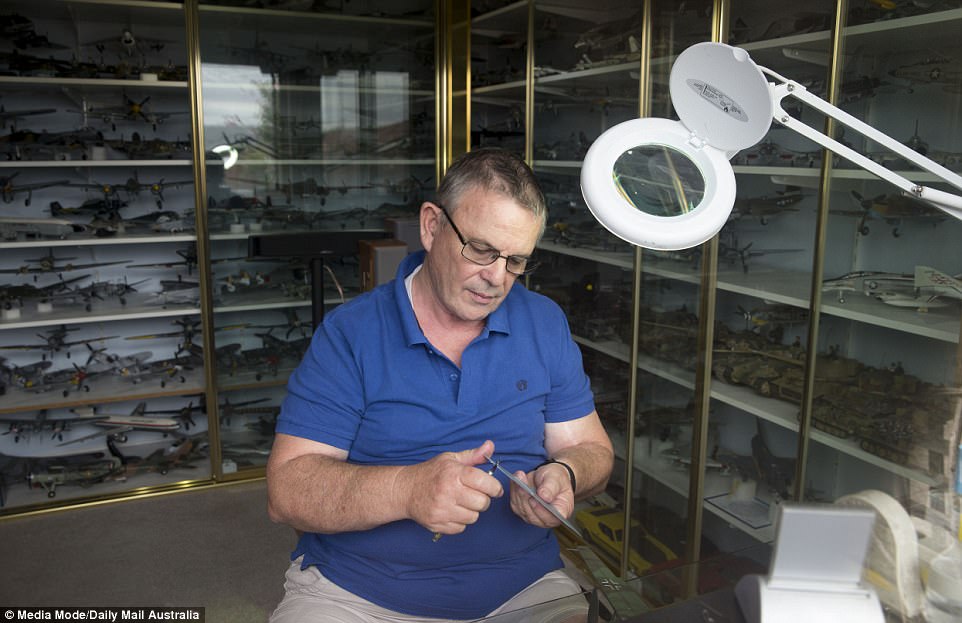 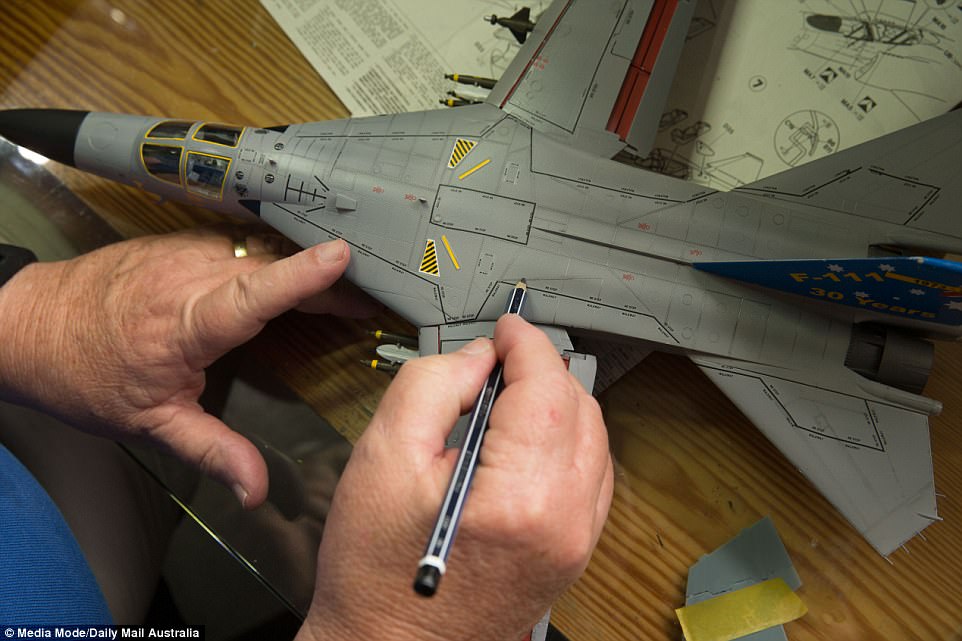 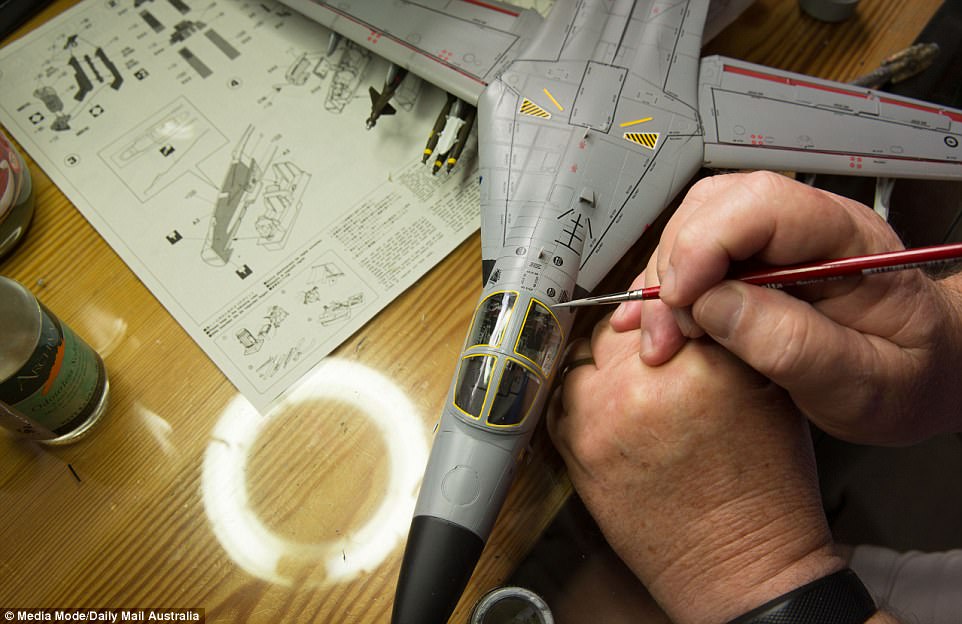 ‘I have kept it so I could restore it but I have bought a new one so I might just do that up and let this one go,’ he said. But his love for planes doesn’t stop in his ‘man cave’ workshop.

‘Whenever there is an air show we will go, and we have been to different places in the world to buy models – I have a guy in Singapore we go to get them from often,’ he said.

His collection boasts a giant tank which weighs up to 100 kilograms, a metre-long version of the sunken warship the Bismarck and a fallen commercial airliner – which he flew on just months before it crashed.

Mr Mackin says he will continue with his collection but will still give things away when he runs out of room. 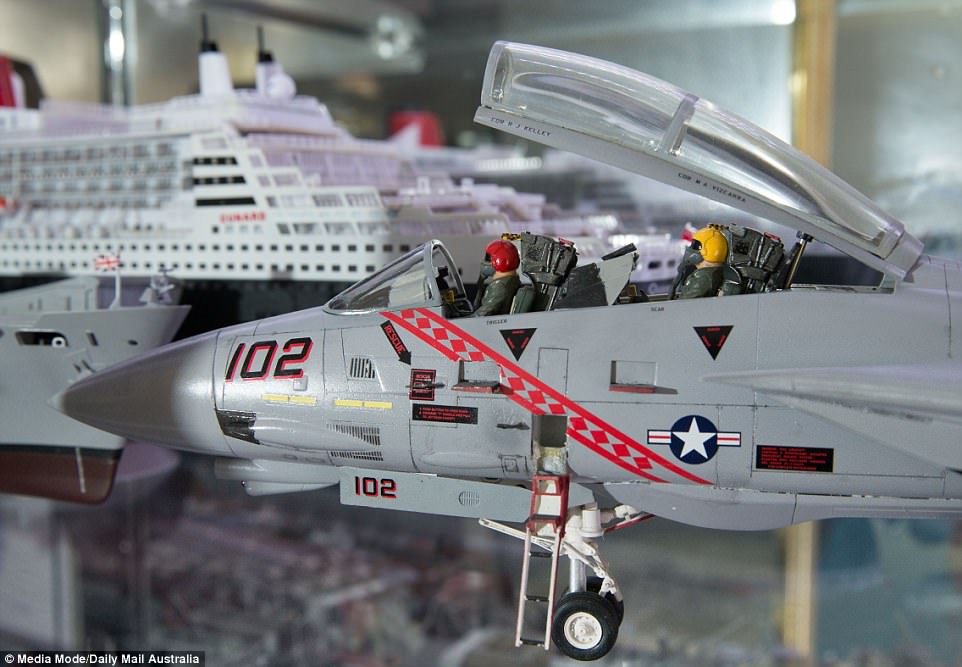 ‘It is an outlet for me and I enjoy doing it. I take my new models to the modelling club in Sydney every month and often win awards for them,’ Mr Mackin said 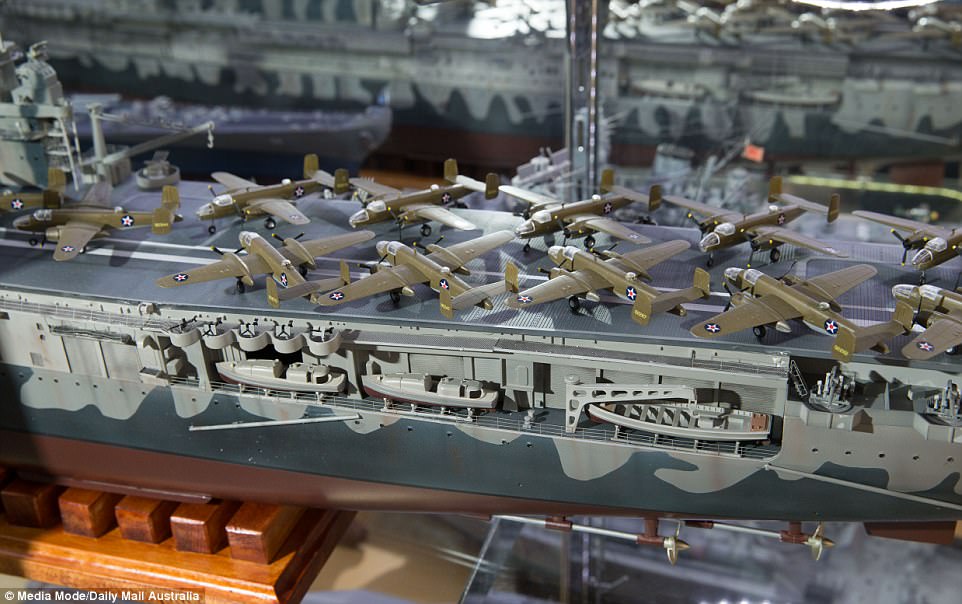 His favourite model is the F4 Phantom – he has several large versions of the ‘workhorse’ plane, and 30 smaller versions of the aircraft which was made popular during the Vietnam War 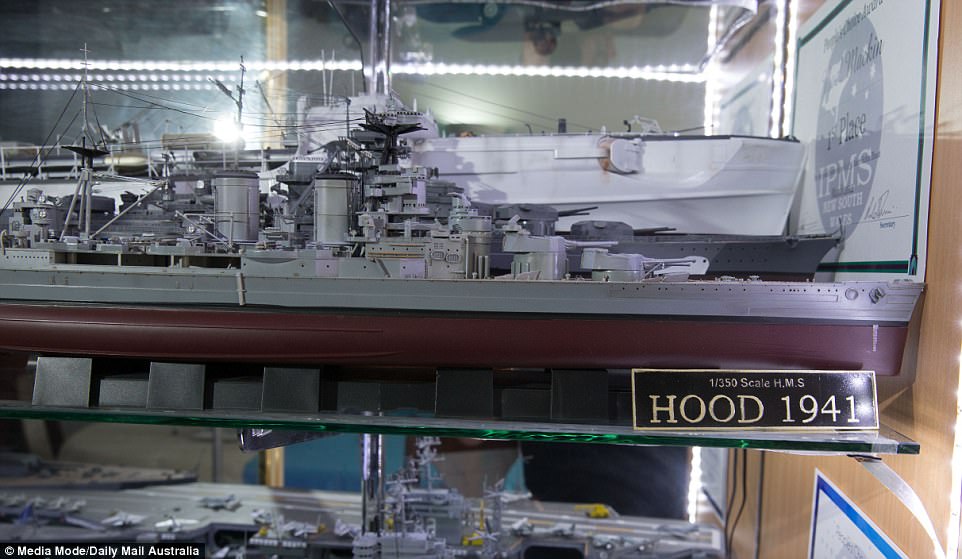