A nonbinary customer has called out a barber for complaining that he ‘doesn’t cut girls’ hair’ – and received an extraordinary spray in reply.

Gabrielle, who was born female but doesn’t identify with any gender, claimed to have been disrespected while getting a haircut from Aaron at his Sydney barber shop, Groomsmen.

They messaged Aaron on Instagram, politely explaining that his comments were ‘harmful and damaging’ and made queer people feel uncomfortable.

‘Hey Aaron, you cut my hair a few days ago and made some pretty harmful comments. First of all I am nonbinary. And second of all, haircuts are not gendered,’ they wrote, before posting the exchange on social media.

Gabrielle, who was born female but doesn’t identify with any gender, claims to have been disrespected while getting a haircut from Aaron at his Sydney barber shop, Groomsmen

‘Telling me that I am a girl and you do not cut ‘girls hair’ is frankly sexist and uncalled for. My hair is biologically no different than any other gender. I asked for a masculine haircut, which you do.’

Gabrielle said their anatomy has ‘nothing to do with’ the men’s haircut they asked for, and pleaded with him to understand why what he said was wrong.

‘You did a great job, I love my haircut but situations like these make queer people feel uncomfortable and afraid, it’s why most of us resort to cutting or colouring our hair in our bathrooms,’ Gabrielle said.

‘I hope I am able to come back to the Groomsmen one day without fear of being discriminated against and I hope you can understand where I’m coming from.’

But Aaron hit back swiftly in a fiery voice note to Gabrielle, blasting them as a ‘woman’ pretending to be a man. 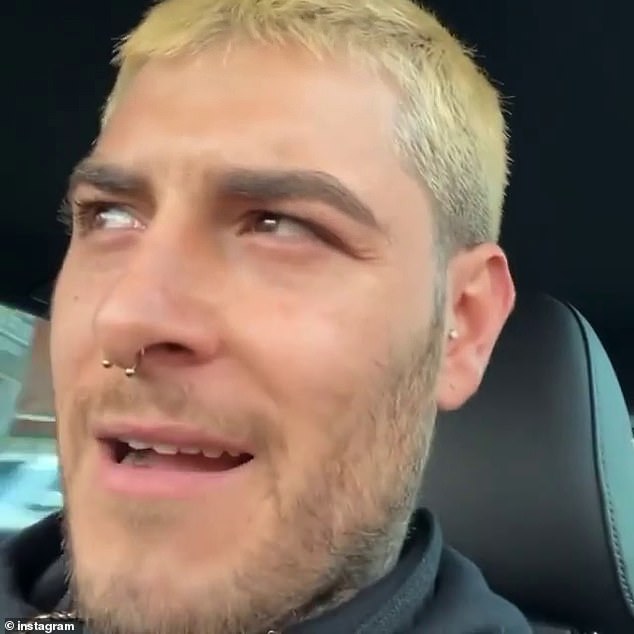 ‘Just try and give it a rest on the whole sexual orientation and gender equality accusations okay? Quite frankly I do not recall myself making any harmful comments,’ he said.

But Aaron didn’t stop there, and posted a series of scathing videos on his Instagram.

‘It doesn’t f**king matter if you’re requesting a men’s haircut, you’re still a female, you still have female hair. 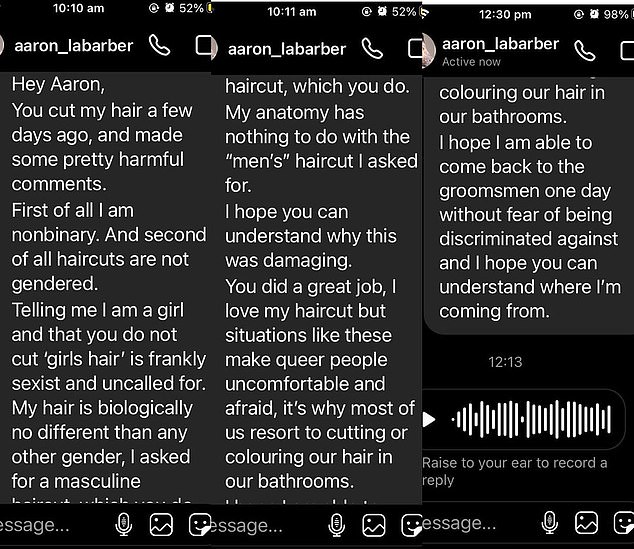 Gabrielle messaged Aaron on Instagram, informing him of his ‘harmful comments’

Aaron then doubled down, and wrote Gabrielle an expletive-filled message slamming her as entitled

The term ‘nonbinary’ can mean different things to different people. At its core, it’s used to describe someone whose gender identity isn’t exclusively male or female.

Nonbinary can also be used as an umbrella term, encompassing many gender identities that don’t fit into the male-female binary.

Although nonbinary is often regarded as a new idea, the identifier has been around for as long as civilization has. In fact, nonbinary gender has been recorded as far back as 400 B.C. to 200 A.D., when Hijras — people in India who identified as beyond male or female — were referenced in ancient Hindu texts.

India is one of many countries around the world with language and a social culture that acknowledges those whose gender can’t be exclusively categorized as male or female.

Aaron then doubled down, and wrote Gabrielle an expletive-filled message calling her entitled and an example of everything wrong with ‘you people’.

‘You know what’s funny with you people, you think this world owes you it all because you had the courage to come out. Listen here yeah, you know why people don’t accept you, because of the way you represent yourself,’ he wrote.

Aaron then claimed to have ‘more gay and lezzo friends’ than Gabrielle, telling them he ‘accepts’ all of them.

‘I was good enough to cut your hair and charge you a tight a** rate and you still want to attack me for saying you have female hair. YOU DO!!’ he wrote.

‘You’re a f**king woman man, and it has nothing to do with what private part you chew on. So get the f**k over yourself.’

Aaron then callously responded to Gabrielle’s anecdote about many queer people being forced to cut and dye their own hair.

‘I’ve plastered this s**t all over the community barber page. Good luck getting your cheap-ass ‘boys cut’.’

Gabrielle issued a classy response back to Aaron, pointing out that his stories weren’t ‘well received’.

‘I’d be happy to provide some info on the queer community should you decide to educate yourself. Happy Pride month,’ she said.

Aaron responded: ‘You mean the circus?’ prompting Gabrielle to call the barber a ‘clown’.