Amazon founder Jeff Bezos said he plans to open space to anyone who can afford a ticket in an interview with Norah O’Donnell, as she made her anticipated debut as anchor of CBS Evening News on Monday.

‘It takes hundreds of millions of dollars to even just get started with something interesting,’ the billionaire CEO and space entrepreneur said.

‘What I want to do is reduce that price of admission with reusable space vehicles so that the next generation you can actually have two kids in a dorm room build a great space company,’ Bezos, whose venture Blue Origin is focused on the next frontier in space, added.

Bezos went on to say that when he started Amazon, the system to deliver packages already existed: ‘It was called the post office.’ 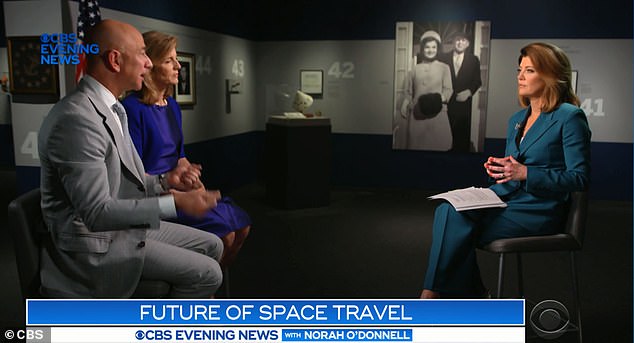 Emmy Award-winning journalist O’Donnell interviewed both Bezos and Caroline Kennedy, former U.S. ambassador to Japan, on the future of space exploration as CBS kicked off its coverage of the 50th anniversary of the Apollo 11 mission

The conversation on the future of space exploration kicked off the network’s coverage of the 50th anniversary of the Apollo 11 mission, when astronaut Neil Armstrong set foot on the moon.

Caroline Kennedy, former U.S. ambassador to Japan, also spoke about the legacy of her father, President John F. Kennedy, in the interview.

The 45-year-old Emmy Award-winning host, who is also the show’s managing editor, did not shy away from calling Trump’s tweets ‘racist’.

Her seat was occupied for more than two decades by TV news legend Walter Cronkite during seminal moments in history, including the assassination of John F. Kennedy and the Vietnam war.

O’Donnell said the the evening newscast will remain the temple of Cronkite, aiming to be ‘the most trusted voice’ amid a flood of information coming over the airwaves and the internet, according to the Wall Street Journal.

‘That’s not a heavy lift for us at CBS — that’s who we are already,’ she said.

O’Donnell will also hark back to Cronkite on Tuesday when she broadcasts from the Kennedy Space Center, the same location that Cronkite reported from in 1969 when he documented the Apollo 11 mission for viewers. 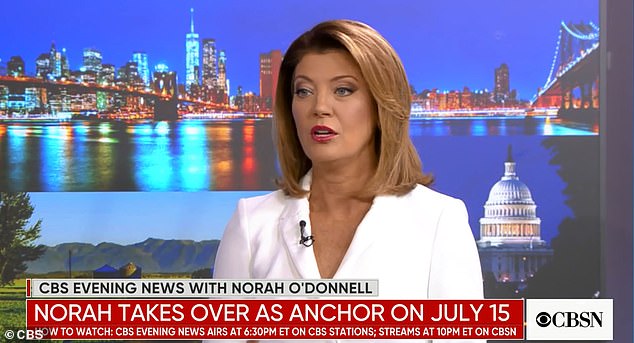 As she takes over the CBS Evening News, the veteran TV journalist (pictured) hopes to sort ‘fact from fiction’

Emmy award-winning host previously co-hosted CBS This Morning for seven years, but coveted the prized evening slot since she was overlooked in 2017.

She succeeded Jeff Glor and is the second woman to anchor the network’s brand-defining evening newscast solo, after Katie Couric, who held the job from 2006 to 2011.

Some of O’Donnell’s CBS This Morning colleagues accused her of sucking up to new president Susan Zirinsky, undermining their efforts with bitchy comments and claiming the show’s successes for herself, network sources told DailyMail.com in April. 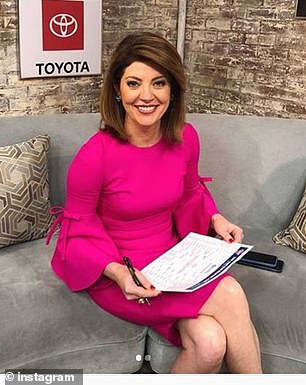 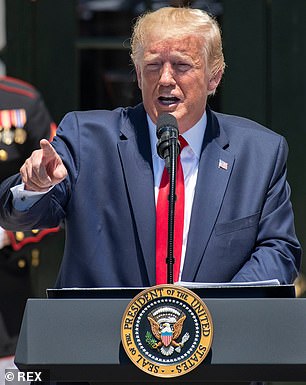 ‘She’s gunning for Jeff’s job and everyone knows it.. From the moment he was announced as the evening news anchor she’s had her sights set on the job,’ a source said.

O’Donnell did little to hide her disappointment in October 2017 when she was passed over in the search for Pelley’s replacement and Glor was picked instead to succeed the likes of Walter Cronkite, Dan Rather and Couric.

‘Reposted this running photo as a reminder to myself that life is a lot like training for a road race,’ the fitness fanatic and mother-of-three lamented on Facebook the very same day.

‘Sometimes no matter how much effort you put into the goal, you fall short. There’s always another race.’ 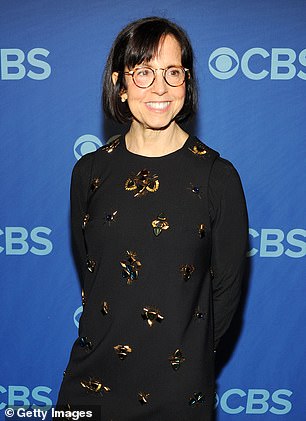 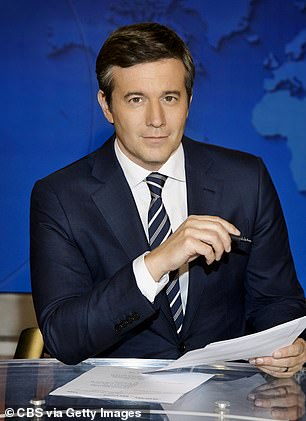 New President Susan Zirinsky (left) calls the anchor change and new constellation part of a ‘new era at CBS’. The CBS Evening News bulletin has long trailed its rivals on ABC and NBC and ratings slumped further after Jeff Glor (right) took over the anchor’s chair from Scott Pelley 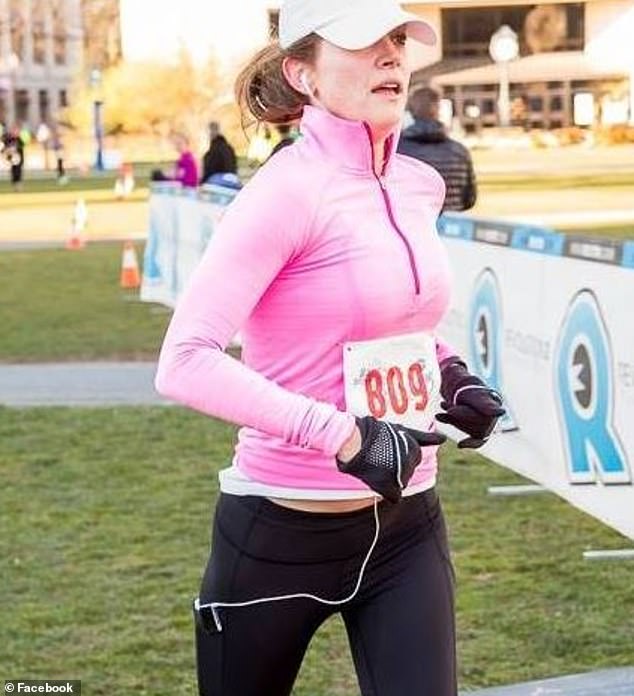 O’Donnell did little to hide her disappointment in October 2017 when Glor was picked to succeed the likes of Walter Cronkite, Dan Rather and Katie Couric. ‘Reposted this running photo (pictured) as a reminder to myself that life is a lot like training for a road race,’ the fitness fanatic and mother-of-three lamented on Facebook the very same day

She added: ‘Sometimes no matter how much effort you put into the goal, you fall short. There’s always another race’

Insiders complained about what they called a flagrant attempt by O’Donnell to toady up to Zirinsky when she reportedly gave her new boss a trendy Lingua Franca sweater emblazoned with the words ‘It’s time’.

‘When she bought Susan what was probably a $400 sweater she made sure everyone knew about it. Subtlety is not her middle name,’ scoffed a CBS colleague.

Some Evening News staff were also said to be alarmed by O’Donnell’s perceived lobbying to have the nightly broadcast moved from New York to Washington, D.C., where she and her husband Geoff Tracy have a house and restaurant.

O’Donnell’s roots are also in Washington reporting, having the White House for both CBS and NBC. 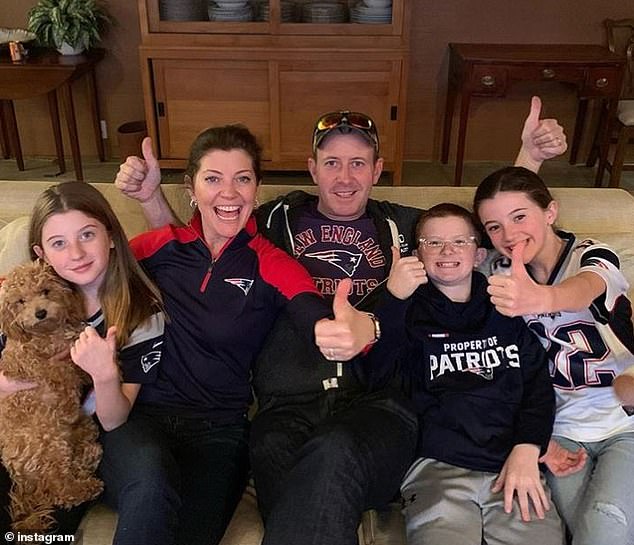 O’Donnell and her husband Geoff Tracy have a house and restaurant in Washington, D.C. The Evening News is moving there from New York in November 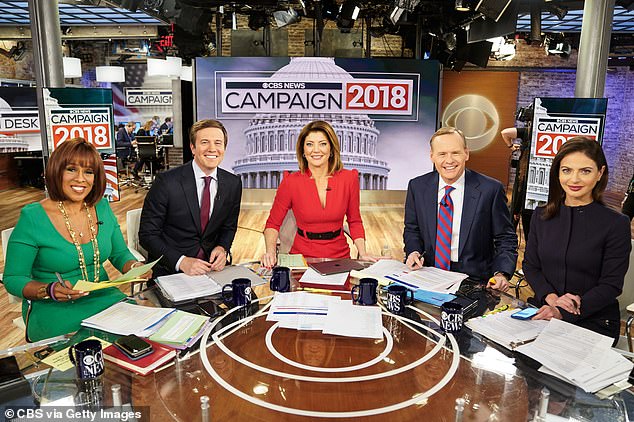 The show is set to move to Washington, D.C. in November after a new studio is built there, although Zirinsky said she’d been considering the move even before deciding to replace Glor with O’Donnell, according to AP.

Zirinsky said CBS will guard against any temptation to become Washington-centric.

‘Why not try something that could distinguish us and have the ability to bring us closer to the people who make decisions that are in the news?’ said Zirinsky, who spent nearly 20 years working in CBS’ Washington bureau.

‘That’s not constricting. That’s liberating. That opens channels for us.’

O’Donnell also underlined that the move will give the show a competitive edge as 2020 approaches.

‘This is the most important election of my lifetime,’ O’Donnell told the Wall Street Journal.

‘We’re going to have a massive amount of foreign influence that is spreading misinformation and disinformation. How do we sort through that?’

‘I’m fascinated by the amount of material she can take in, synthesize and reveal to the audience in a meaningful, understandable way,’ she said.

The switch is the most prominent in a series of changes aimed at reviving CBS’s news division, which has been hurt by sexual-harassment scandals and declining ratings.

CBS Evening News has long trailed its rivals on ABC and NBC, and ratings have slumped slightly further since Glor took over the anchor’s chair from Scott Pelley.

‘It’s our vision to be the No. 1 evening news broadcast, but it takes time for an audience to find you. That’s OK; we know it’ll be a slow build,’ O’Donnell said.

She made her TV debut when she was a 10-year-old living in Seoul, where her father was stationed as a U.S. Army doctor.

She landed an after-school gig on a South Korean TV show teaching locals English, where she would open the show with a few phrases in Korean, then give the English translation.

O’Donnell closed out her debut broadcast on Monday by quoting legendary CBS broadcaster Edward R. Murrow, saying: ‘This instrument can teach, it can illuminate; yes, and even it can inspire.

‘But it can do so only to the extent that humans are determined to use it to those ends. Otherwise it’s nothing but wires and lights in a box.

‘There is a great and perhaps decisive battle to be fought against ignorance, intolerance and indifference.

‘This weapon of television could be useful.’

Senior TV Editor Brian Steinberg wrote: ‘Norah O’Donnell threw out the gimmicks and nonsense in favor of information during her first broadcast as anchor of ‘CBS Evening News’ – then called the ghost of Edward R. Murrow to make sure viewers understood what she intends to deliver going forward.’

Another person commented on the anchor’s labeling of the President’s tweets: ‘Norah O’Donnell, to her credit, was explicitly saying ‘racist tweets.’ I was surprised and impressed. And grateful.’

But someone else implied that made her biased: ‘Norah O’Donnell is a democrat and it shows on the evening news.’

Another person doubted that O’Donnell can improve CBS’ ratings: ‘Hate to be a downer but, after watching the first broadcast, I don’t think Norah O’Donnell is going to move the needle much, ratings wise, for the CBS Evening News.’