A British couple have spoken of their horror when their US plane caught fire thousands of feet in the air just days after a woman was sucked out of an aircraft window.

The Zouvani family’s Delta flight was forced to turn around over Atlanta after a blaze broke out in the craft’s right wing engine at 7,000 feet.

The couple and their two young children from Cantley, Norfolk, were catching their connecting flight home to Heathrow after a fortnight-long holiday in Mexico.

They were unaware that just the day before a woman had died after another US engine fire resulted in an explosion almost sucking the victim from the plane’s window.

Michael Zouvani, 44, said: ‘We were pretty oblivious to it. We were sat towards the back of the plane behind the wing, but on the right side.

‘The guys next to us had a better view and were taking pictures of smoke coming out of it.

The Zouvani couple (pictured) and their two young children from Cantley, Norfolk, were catching their connecting flight home to Heathrow after a fortnight-long holiday in Mexico

‘We’d been in the air about half an hour when we realised we weren’t moving anywhere.’

Wife Nicky, 41, added: ‘The crew were very calm but they were all talking amongst themselves and looking out of the window over the wing.

‘They told us parts of what was happening but not all of it. A friend of mine who’s an air hostess said that we’re lucky as it could’ve been fatal. The Zouvani family, which included children Zach, nine, and Eloise, five, were four of 274 passengers and 14 crew members on the Delta flight

‘At the time you can’t think about what might happen you just deal with it.’

The Zouvani family were four of 274 passengers and 14 crew members. The pair were travelling with their two children Zach, nine, and Eloise, five.

Mrs Zouvani who works as a mortgage advisor in Great Yarmouth said: ‘It was quite a bumpy flight apparently the engine cut out at one point. 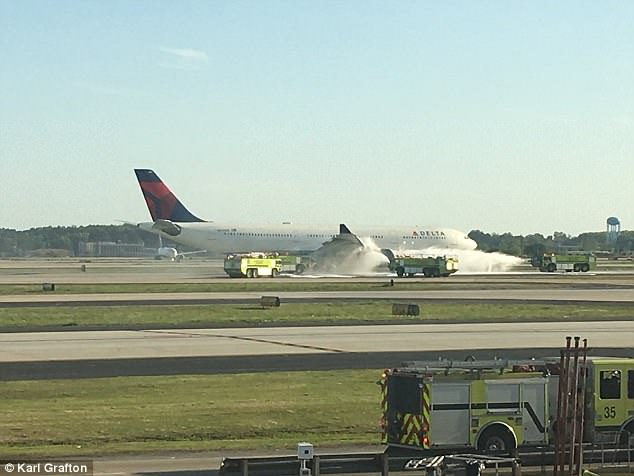 The plane was turned around over Atlanta when it caught fire 7,000 feet in the sky

‘The kids were just watching in-flight entertainment. Zach said he wasn’t scared but Eloise wanted to get back to London.

‘When we were about to touch back down in Atlanta the pilot told us there would be emergency services waiting to put the fire out and then we could take off again.

‘We thought ‘really?’ but then they got us on another flight.’

Mr Zouvani said: ‘It had been a holiday with a few incidents so it just seemed part and parcel really.

‘We’re very glad to be back at home and on the ground.’