Nicolas Ackies, 18, was pronounced dead on the scene at an off-campus apartment building in Norfolk, Virginia.

Dispatchers responded to a call around 6pm for gunshots heard in the area.

Former NSU football player Jaquan Anderson, 22, was arrested near the scene and has been charged with second degree murder and use of a firearm in the commission of a felony .

The suspect is a recent NSU graduate and his last known address is on the same block as the crime scene.

Both the victim and suspect are originally from Richmond.

Anderson is being held in Norfolk City Jail without bond. 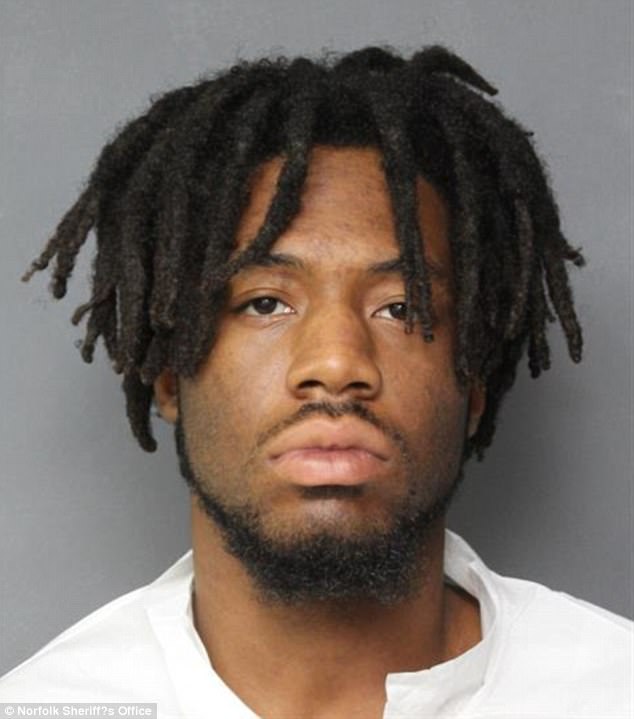 Jaquan Anderson, 22, is a recent NSU graduate who played on the football team and was charged with second-degree murder

This tragedy came just one day before the Spartan’s homecoming football game against Savannah State University.

The team held a moment of silence before Saturday’s game to honor the defensive lineman.

In a press conference after the game, coach Latrell Scott spoke about the freshman.

‘He was a great young man, his mother did a tremendous job raising him,’ the coach said. ‘He was a guy that we loved having on our team.’

Ackies was known as a talented player and planned to major in criminal justice.

NSU Athletics Director Marty L. Miller expressed his condolences regarding the loss of Ackies: ‘This is such a tragic situation. Our prayers are with Nick’s family during this very difficult time,’ Miller said. ‘He will be dearly missed by the entire Norfolk State University family.’

This is the second shooting death to strike the Norfolk State football team this season.

In June, Dy-Shawn Simpkins, Jr., who enrolled in January was to be a promising freshman defensive back at the school this season. He was shot and killed in New Jersey.