Prince Harry should be stripped of his royal title because he is currently ‘exploiting’ it for his personal financial gain, former Lib Dem MP Norman has claimed.

Mr Baker, 63, author of What The Royal Family Don’t Want You To Know, argued the Duke of Sussex, 36, should be made to live as a private individual, after a Tatler survey found two thirds of Britons think he and Meghan, 39, should be stripped of their HRH titles.

Mr Baker argued Harry should not be allowed to keep his HRH title because he is no longer representing the British royal family overseas and is cashing in on his pedigree.

The Duke and Duchess of Sussex drew criticism last week after they commented publicly on the US elections and urged people to register to vote.

Speaking on Good Morning Britain today, Mr Baker said: ‘Harry clearly is exploiting the Buckingham palace connection, if he wants to run away and do Netflix documentaries, that’s fine, do it as a private individual.

Royal experts have clashed over whether Prince Harry and Meghan Markle, pictured the Commonwealth Day Service, should have their titles removed 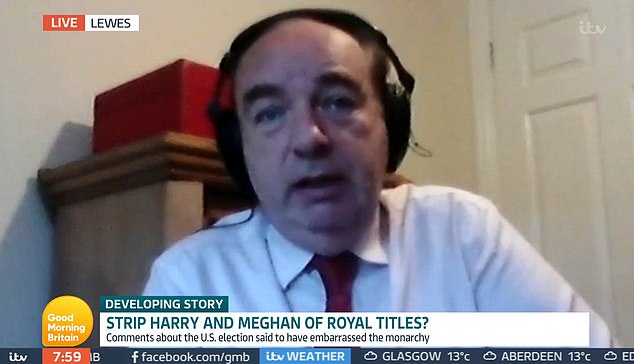 Former MP and author of What The Royal Family Don’t Want You To Know Norman Baker, 63, (pictured) appeared on GMB this morning to discuss the issue

‘HRH means he’s representing Britain abroad, but he’s not. He’s divorced himself from the royal family in practical terms, but not titular terms.

He continued: ‘If he keep his HRH title he is still eligible for public support from the taxpayer.

‘For example, we’re paying up to a million to pay for security personnel to wander around Frogmore cottage, we’ll pay for his travel when he comes back to the UK.

He added: ‘Harry clearly is exploiting the Buckingham palace connection, if he wants to run away and do Netflix documentaries, that’s fine, do it as a private individual.’

However royal expert Ingrid Seward, editor of Majesty magazine, argued it makes no difference whether Harry had a royal title or not because he is a ‘prince by blood’ and will capitalise on his royal connections with or without the official HRH title.

She said: ‘The title was a gift of the queen on their wedding day, to one of her favourite grandchildren and to his future wife. 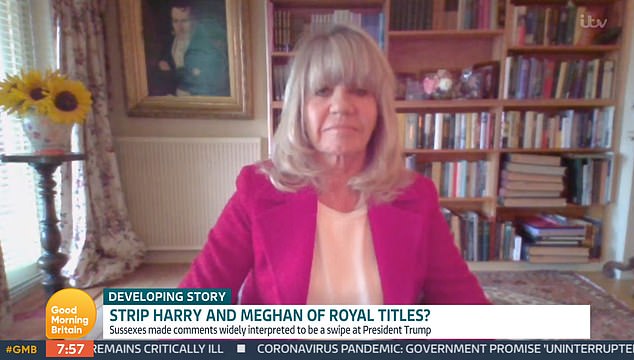 Royal commentator Ingrid Seward, 72, also appeared and argued that taking away their titles will achieve nothing as Harry is a ‘prince by blood’ 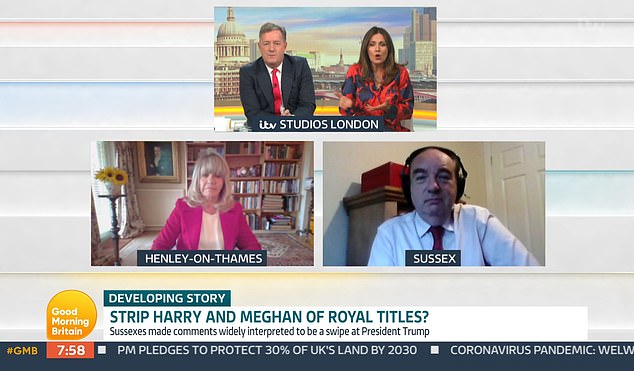 Norman, from Lewes in East Sussex, believes Harry is ‘exploiting’ his royal connections, and that he and Meghan weren’t offered their ‘huge deal’ for their ‘interesting views’

‘It’s really something it would be very churlish, I feel, to say they can’t have anymore, everyone knows them as Harry and Megan.

‘Yes I agree they’re trading off their connections, but that’s who they are, Harry is a prince of the blood and you can’t take that away from him.’

Viewers were divided over the issue, with some believing they should not keep their title.

One raged: ‘If they truly wanted to live in privacy as they say, then they wouldn’t be preaching their cr*p constantly, however these attention seeking numpty’s never really wanted anonymity ” especially her” so leave them do it without the privilege of any royal title’

Another agreed: ‘Well…. yeah? You can’t be a member of the royals, sworn to impartiality and make a damn political ad????’

However others disagreed, with one writing: ‘It makes no difference if Harry has a title or not, the fact is he is Royal, people are interested in them.’

Another said: ‘Don’t slate Harry and Meghan slate Netflix for leaching of them. Good luck them’.

Viewers were divided over the issue, with some believing they should not keep their title, while others felt it won’t make much of a difference