North Korea pleads with Trump to reconsider cancellation of summit

North Korea released fresh images of what it says was the demolition of a nuclear test site on the same day it expressed regret over President Donald Trump’s decision to cancel a June 12 summit with ruler Kim Jong-un.

North Korea on Friday said it was still willing to talk to the United States after President Donald Trump cancelled a summit between the two countries, a decision Pyongyang described as ‘extremely regrettable’.

‘The abrupt announcement of the cancellation of the meeting is unexpected for us and we cannot but find it extremely regrettable,’ Kim Kye Gwan, North Korea’s First Vice Foreign Minister, said in a statement carried by the state-run KCNA news agency.

‘We again state to the US our willingness to sit face-to-face at any time in any form to resolve the problem,’ Kim added. 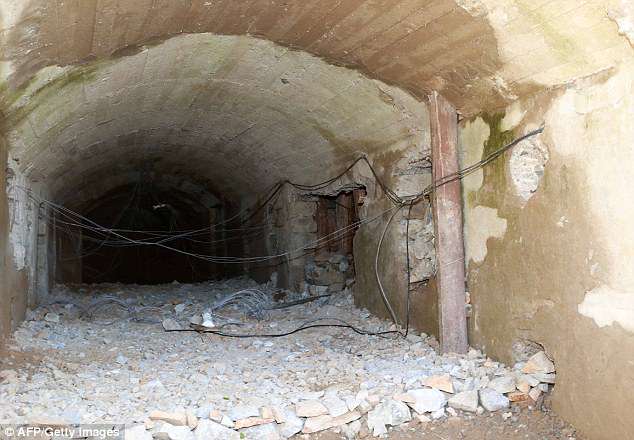 A photo taken on May 24, 2018 shows the entrance to a nuclear test tunnel at North Korea’s Punggye-ri test facility prior to its demolition 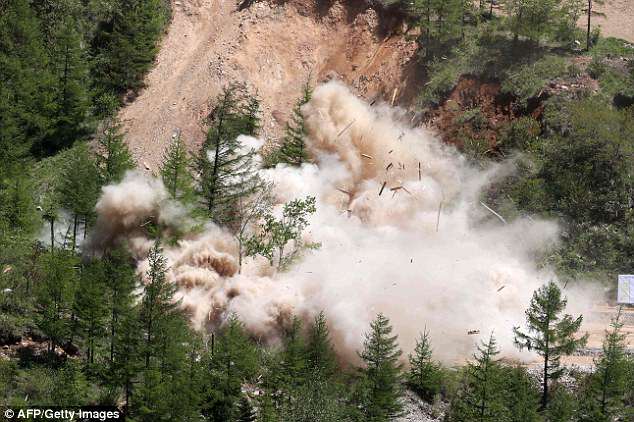 A photo taken on May 24, 2018 shows a general view of a dust cloud surrounding the area near the entrance to a tunnel at North Korea’s Punggye-ri nuclear test facility 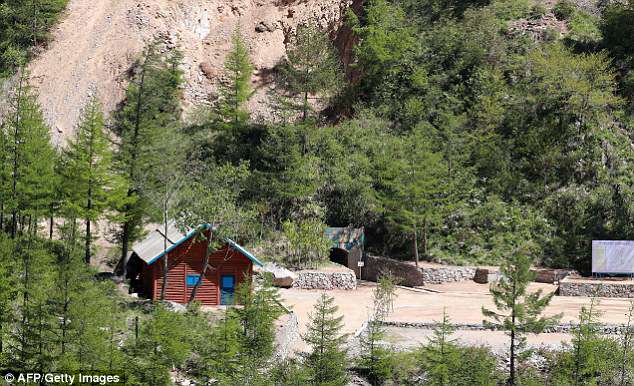 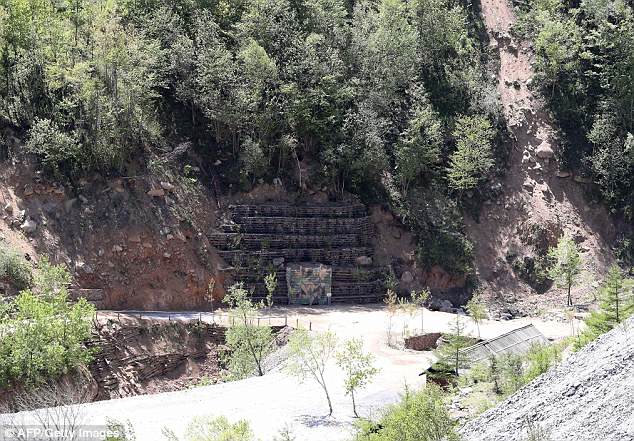 It is not known to what extent the northeastern Punggye-ri facility has been demolished, but foreign journalists invited to witness the destruction described a series of ‘huge explosions’ 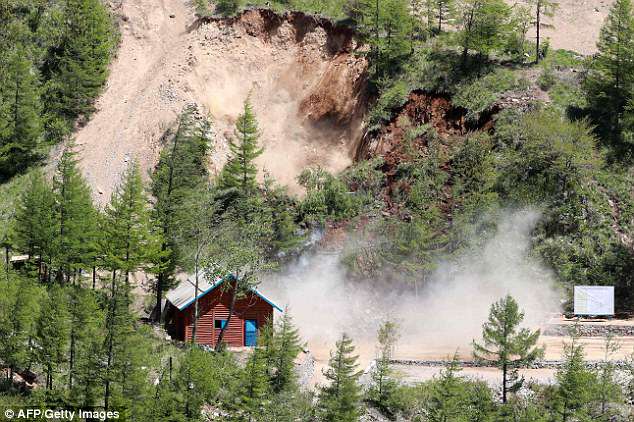 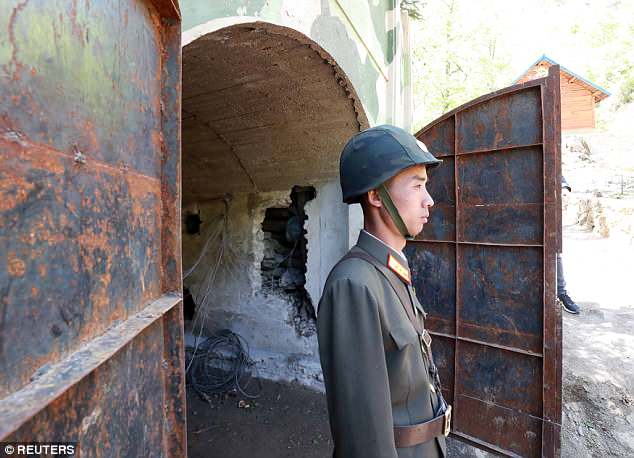 Punggye-ri has been the staging ground for all six of the North’s nuclear tests, including its latest and by far most powerful one in September last year, which Pyongyang said was an H-bomb 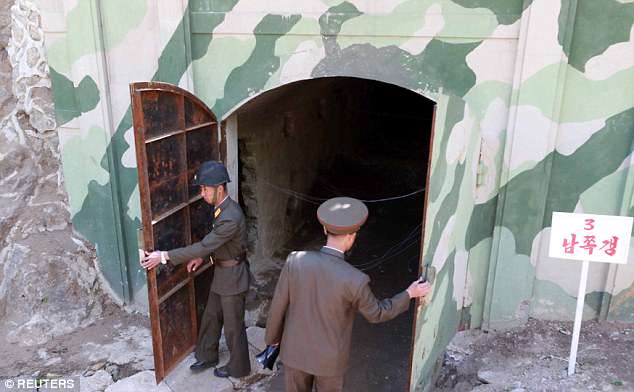 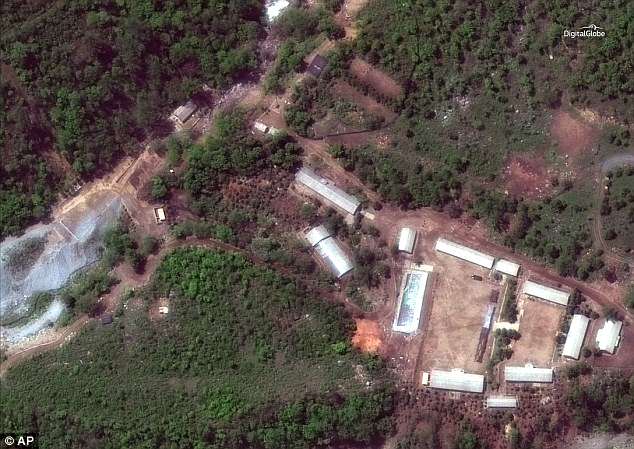 Blown up: This satellite image from yesterday shows the Punggye-ri test site in North Korea, which has now reportedly been demolished 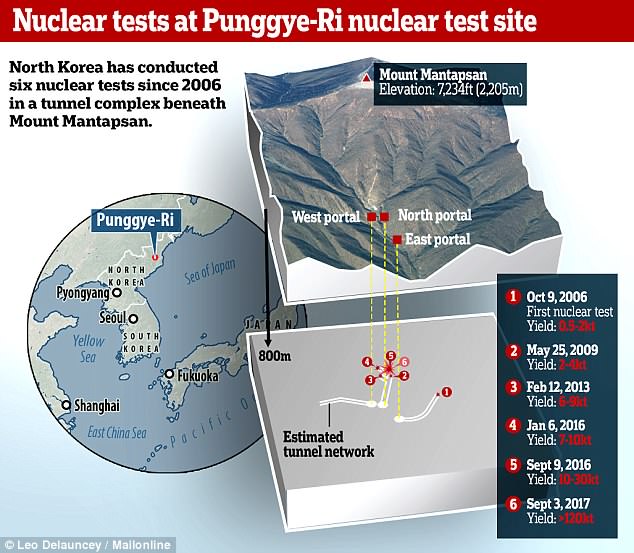 The tunnel complex below Mount Mantapsan is believed to be based on old Soviet and American designs and is used for North Korea’s nuclear tests. After the latest and most powerful test, in September last year, the mountain shifted – leading to speculation that part of the complex collapsed and rendered in unusable

President Donald Trump on Thursday called off his planned June summit with Kim Jong Un, blaming ‘open hostility’ from the North Korean regime and warning Pyongyang against committing any ‘foolish or reckless acts’.

In a letter to Kim, Trump announced he would not go ahead with the high-stakes meeting set for June 12 in Singapore, following what the White House called a ‘trail of broken promises’ by the North.

In his Friday statement, First Vice Foreign Minister Kim said the North Korean leader had been preparing for the summit to go ahead.

‘Our Chairman (Kim Jong-un) had also said a meeting with President Trump would create a good beginning and had been putting effort into preparations for it,’ Kim said.

Just before Trump announced the cancellation of the talks, North Korea declared it had ‘completely’ dismantled its nuclear test site, in a carefully choreographed move portrayed as a goodwill gesture ahead of the summit. President Donald Trump said Thursday at the White House that a nuclear summit with North Korea’s dictator, which he had canceled hours earlier, might still take place – but he warned Kim Jong-un that America’s military might stands ready to keep him in check 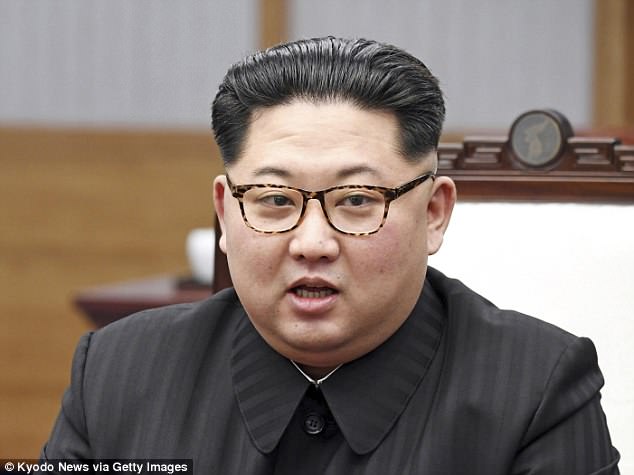 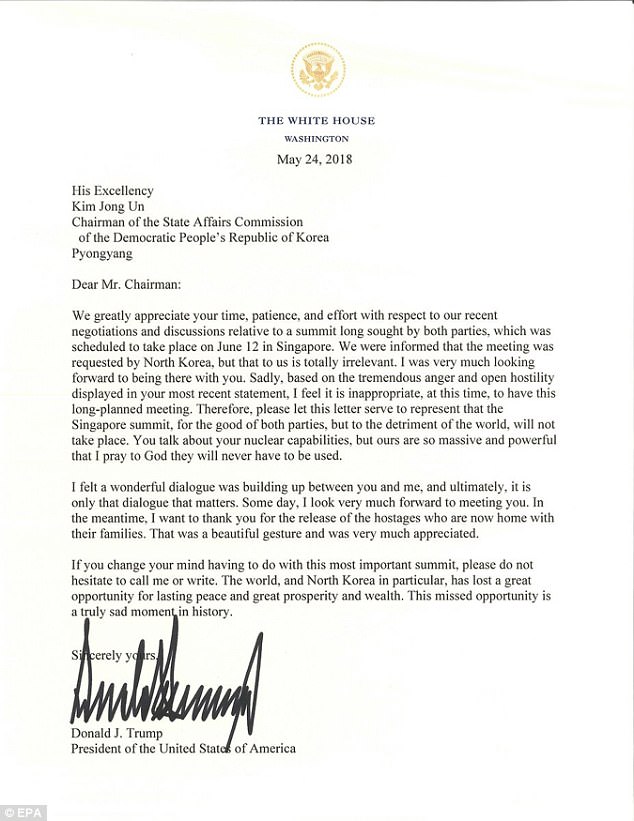 ‘You talk about your nuclear capabilities, but ours are so massive and powerful that I pray to God they will never be used,’ Trump wrote to Kim It is not known to what extent the northeastern Punggye-ri facility has been demolished, but foreign journalists invited to witness the destruction described a series of ‘huge explosions’.

The explosions at the nuclear test site deep in the mountains of the North’s sparsely populated northeast were reportedly centered on three tunnels into the underground site and a number of observation towers in the surrounding area.

‘There was a huge explosion, you could feel it. Dust came at you, the heat came at you. It was extremely loud,’ Sky News’ Tom Cheshire, who was among the journalists invited, wrote on the British broadcaster’s web site.

Punggye-ri has been the staging ground for all six of the North’s nuclear tests, including its latest and by far most powerful one in September last year, which Pyongyang said was an H-bomb.

Experts are divided over whether the demolition will render the site useless.

Skeptics say the facility has already outlived its usefulness with six successful nuclear tests in the bag and can be quickly rebuilt if needed.

North Korea also did not invite any independent observers, raising speculation that it was simply destroying evidence of its nuclear program with the blessing of the United States.

This is also not the first time that North Korea has demolished one of its nuclear facilities without hampering the country’s progress in building a nuclear bomb. 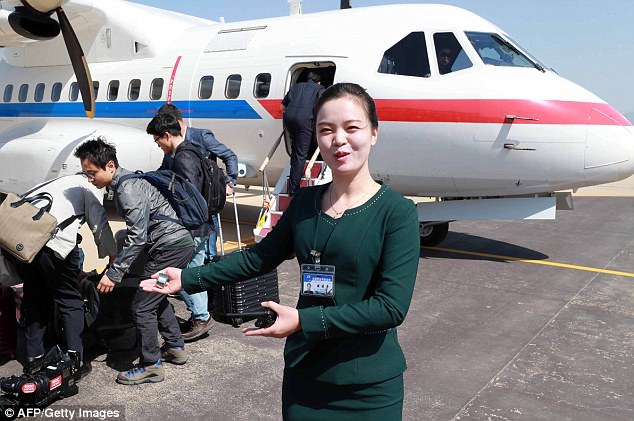 In 2008, a cooling tower at the Yongbyon Nuclear Scientific Research Center was demolished in front of the eyes of the world’s media.

The tower was part of the complex that produced polonium used in the country’s first nuclear test, and at the time was seen as a symbolic move toward disarmament.

Youngbyon had ceased operating the year before after a series of complex negotiations between North Korea, China and the US.

But it is believed North Korea only closed the site having enriched enough material for several nuclear tests, only to reopen it years later when it needed more.

The country claimed to have restarted the site in 2015, and in 2016 the International Atomic Energy Agency agreed that the plant was probably operational.

The chances of success for the unprecedented face-to-face between Trump and Kim had recently been thrown into doubt.

On Thursday Pyongyang hardened its rhetoric by attacking US Vice President Mike Pence as ‘ignorant and stupid’.

That broadside appeared to hit a nerve with Trump, leading to him abruptly pulling out of the talks.

‘Sadly, based on the tremendous anger and open hostility displayed in your most recent statement, I feel it is inappropriate, at this time, to have this long-planned meeting,’ read Trump’s letter to Kim, which was dictated word-for-word by the US leader, according to a senior White House official.