North Korea on Saturday hailed its summit with the South as a “historic meeting” that paved the way for the start of a new era, after the two leaders pledged to pursue denuclearisation and a permanent peace.

The official KCNA news agency carried the text of the leaders’ Panmunjom Declaration in full and said the encounter opened the way “for national reconciliation and unity, peace and prosperity”.

But the phrase is a diplomatic euphemism open to interpretation on both sides.

Pyongyang has long wanted to see an end to the US military presence and nuclear umbrella over the South, but it invaded its neighbour in 1950 and is the only one of the two Koreas to possess nuclear weapons.

Analysts warn that previous displays of inter-Korean affection and pledges by the North ultimately came to naught.

For years, Pyongyang insisted it would never give up the “treasured sword” of its nuclear arsenal, which it says it needs to defend itself against a possible US invasion.

But it has offered to put it up for negotiation in exchange for security guarantees, according to Seoul — although Kim made no public reference to doing so at Friday’s spectacular summit.

In a separate report, KCNA said the two leaders had a “candid and open-hearted exchange of views” on issues including “ensuring peace on the Korean Peninsula and the denuclearisation of the peninsula”.

The Rodong Sinmun newspaper, the mouthpiece of the North’s ruling Workers’ Party, devoted the first four of its six pages to the event, carrying a total of 60 photos, 15 of them on page one.

State television broadcast several minutes of footage from the meeting, including the leaders’ embrace, but with a voiceover throughout, and deployed veteran newsreader Ri Chun Hee to read out the declaration.

Yang Moo-jin of the University of North Korean Studies said the breadth of coverage was a signal the North was “sincere in its commitment”.

“It is also another signal to Washington in the lead up to the US-North Korea summit that the ball is in your court now,” he told AFP.

When Kim stepped over the military demarcation line that divides the peninsula he became the first North Korean leader to set foot in the South since the Korean War hostilities ceased in 1953 with an armistice rather than a peace treaty. 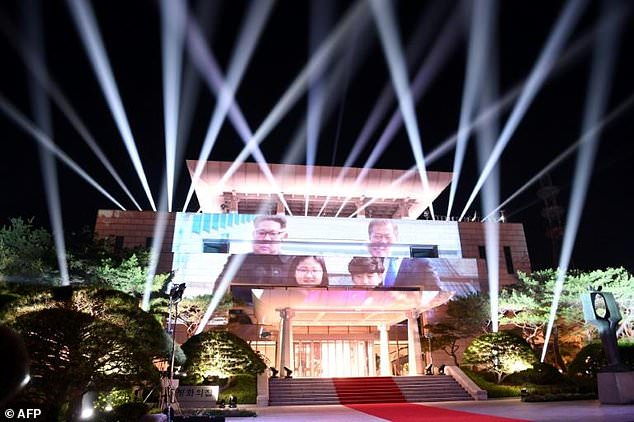 Images of the two leaders were beamed onto the facade of Peace House where the talks took place, during a closing ceremony at the end of their inter-Korea summit

He then persuaded Moon to step into the North — a fact reported by KCNA on Saturday — and the two leaders shared a day of smiles, intimate moments, and a half-hour-long one-on-one conversation.

The North has made rapid progress in its weapons programmes under Kim, detonating its sixth and most powerful nuclear test last year and launching missiles capable of reaching the US mainland, in moves that triggered increasingly strict UN Security Council sanctions against the regime.

Kim and US President Donald Trump traded personal insults and threats of war, sending tensions soaring before Moon seized on the Winter Olympics to broker dialogue, beginning a dizzying whirl of diplomacy that led to Friday’s meeting in the Demilitarized Zone.

Analysts and diplomats say that a combination of factors were behind Pyongyang’s change of heart, including feeling that it was in a position to negotiate from strength, the looming impact of sanctions, and fear of potential US military action.

But KCNA gave Kim the credit. 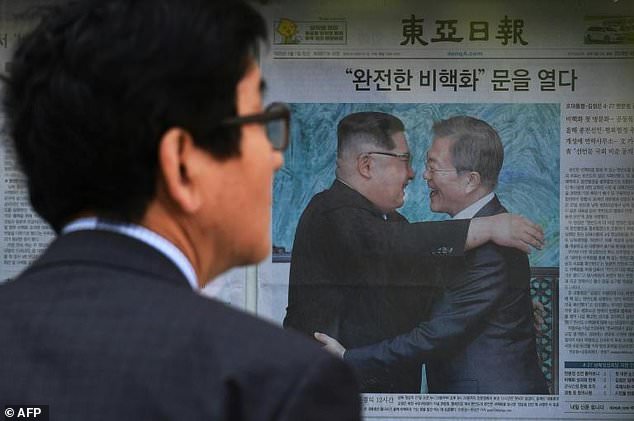 “The historic meeting at Panmunjom came to be realised thanks to the supreme leader’s ardent love for the people and will for self-determination” independent of outside influence, it said.

Washington is pressing Pyongyang to give up its weapons in a complete, verifiable and irreversible way, and analysts say that meaningful progress will depend on the outcome of Kim’s much-anticipated summit with Trump in the coming weeks.

Trump hailed the Korea summit as historic, but warned “only time will tell”.

He told reporters he would not be “played” by the North’s leader at their upcoming meeting, with “two countries” now in the running to host the event.

In the declaration document, the two leaders pledged to seek a peace treaty this year to formally declare the Korean War over, 65 years after hostilities ceased.

They will seek a meeting with the US and possibly China — both of them signatories to the 1953 ceasefire — “with a view to declaring an end to the war, turning the armistice into a peace treaty, and establishing a permanent and solid peace regime”.

But agreeing a treaty to formally close the conflict will be complicated — both Seoul and Pyongyang claim sovereignty over the whole Korean peninsula.

The declaration “will lead to an all-out and epoch-making progress in inter-Korean relations”, KCNA said, and “relink the cut-off national blood lines” and “advance the future of co-prosperity and reunification”.

Pyongyang regularly insists on the importance of reunifying the two Koreas, but opinions are divided in the democratic and prosperous South, where younger citizens have spent much of their adult lives being threatened by the North, and fear the costs and consequences of combining the countries.