A panel of experts monitoring Pyongyang’s transfer of prohibited ballistic missile, conventional arms and dual use goods discovered more than 40 previously unreported shipments to Syria between 2012 and 2017. 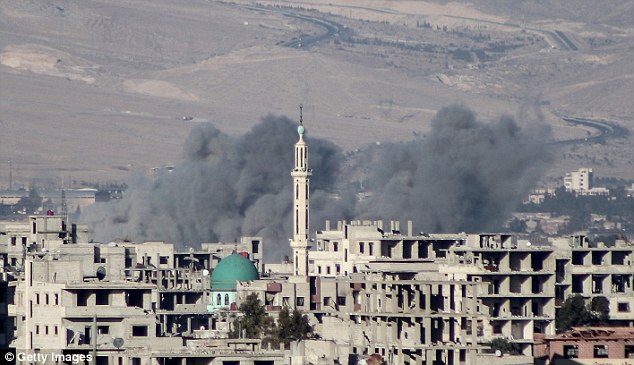 Syria is accused of of using chemical weapons against rebel-controlled areas including recently in the Damascus suburb of eastern Ghouta, which President Bashar Assad’s government denies.

In August 2016 a technical delegation was ‘involved the transfer to Syria of special resistance valves and thermometers known for use in chemical weapons programmes’.

An unnamed UN member state reported that Syria ‘continues to operate at chemical weapons and missile facilities at Barzeh, Adra and Hama’. 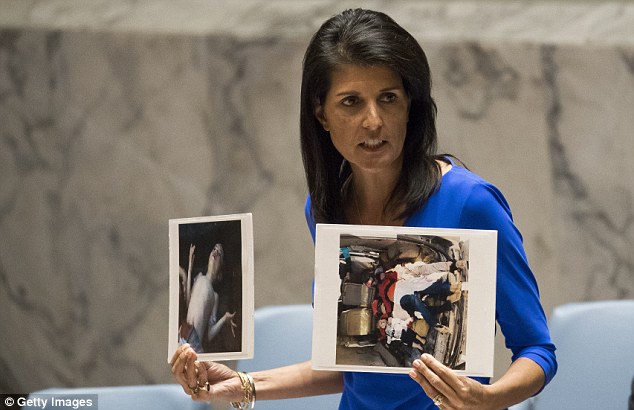 U.S. Ambassador to the United Nations Nikki Haley holds up photos of victims of a Syrian chemical attack in 2017

‘There are no DPRK technical companies in Syria and the only presence of some DPRK individuals are confined in the field of sports under private individual contracts for training athletics and gymnastics,’ it said.

For many years, the panel said the DPRK Corst Company acted on behalf of the Second Economic Committee, which is under sanctions, to ship goods to Syria for use in prohibited programs.

The report also detailed previously unreported arms shipments and cooperation with North Korean front companies for those under UN sanctions between 2010 and 2017.

The transactions ‘showed further evidence of arms embargo and other violations, including through the transfer of items with utility in ballistic missile and chemical weapons programs’, it said.

The panel also examined 13 shipping containers shipped to Syria from a Chinese company filled with ‘acid resistant tiles’ that could be used to make a chemical factory.