North Korea has warned Britain will ‘pay the price’ for putting two organisations on its sanctions list.

The British government has said the two organisations are involved in forced labour, torture and murder in North Korean prison camps.

The move is part of the first sanctions under Britain’s new global human rights regime.

Foreign Secretary Dominic Raab announced sanctions against 49 organisations and individuals who are accused of human rights abuses on July 6.

He said the new sanctions regime will target people responsible for the ‘very worst human rights abuses around the world’.

The organisations in North Korea have been named as the Ministry of State Security Bureau 7 and Ministry of People’s Security Correctional Bureau.

A North Korean Foreign Ministry spokesperson said in a statement carried on state media KCNA: ‘Britain’s latest move is a flagrant political plot to jump on the bandwagon of the United States’ inimical policy.

‘We strongly condemn and reject the UK’s daring to impose sanctions on the institutions responsible for our country’s security as violent interference in domestic affairs.’

The sanctions will enable ministers to impose travel bans and to freeze the assets of both state officials and non-state actors.

The organisations and individuals are from four different nations, including 25 from Russia and 20 from Saudi Arabia. 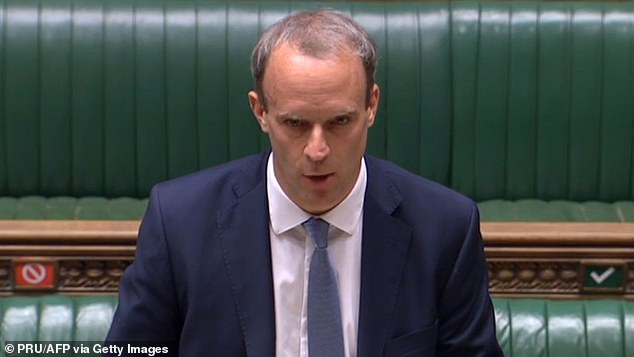 The rest are from North Korea and Myanmar.

Mr Raab told MPs the UK’s first sanctions for human rights abuses will cover those involved in the deaths of the Russian lawyer Sergei Magnitsky, as well as Mr Khashoggi, the systemic killings of the Rohingya population in Myanmar and the North Korean gulags.

North Korea and the United States have failed to find a compromise over North Korea’s nuclear weapons programme or international sanctions imposed on Pyongyang.

Recent North Korean statements, including one by Kim Yo Jong, the sister of North Korea’s leader Kim Jong Un, have reiterated Pyongyang’s objections to what it sees as hostile and self-serving policies of the United States.

She said another summit with the United States would only be useful for Washington at this point, but added that her country had no intention of ‘threatening the US’, according to state media.

Kim said in her personal opinion another summit between leader Kim Jong Un and U.S. President Donald Trump might not happen this year ‘but we never know’, news agency KCNA reported on Friday.

U.S. Secretary of State Mike Pompeo said on Thursday he was ‘very hopeful’ about resuming talks with North Korea and appeared to leave open the possibility of another summit between the countries’ leaders.

Kim Yo Jong’s comments came a day after the U.S. point man for North Korea, Deputy Secretary of State Stephen Biegun, wrapped up a three-day visit to Seoul where he rejected speculation he was seeking to meet North Korean officials during his trip, but said the United States was open to talks. 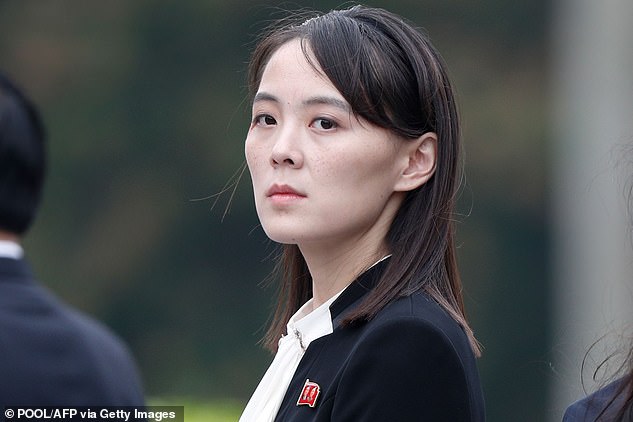 Recent North Korean statements have rejected the idea of new talks, and Kim reiterated Pyongyang’s objections to what it sees as hostile and self-serving policies by the United States, including continuing to impose sanctions.

Kim Yo Jong said: ‘We are not saying we will never denuclearize, but we are making it clear that we cannot do it now.’

She added: ‘We have no intention of threatening the U.S. As long as they don’t touch us and hurt us, everything will flow as is.’

Her comments were couched in a somewhat softer tone than previous statements. She even noted she had received special permission to view recordings of the recent Fourth of July Independence Day celebrations in the United States.

Russia threatened to retaliate after Britain sanctioned officials including Alexander Bastrykin, the head of the powerful Investigative Committee which reports directly to President Vladimir Putin.

The Russian embassy in London said in statement: ‘The Russian side reserves the right to take retaliatory measures in connection with Britain’s hostile decision.’

The mission said Moscow was particularly outraged by the sanctioning of top directors of Russia’s Investigative Committee and General Prosecutor’s Office as well as judges.

How will the UK’s new sanctions regime work and who will be targeted?

Below are the key points made by the Foreign Secretary as he addressed MPs in the House of Commons on July 6.

On who will be targeted:

‘In 2019, it was in the Conservative Party manifesto as a clear commitment. So, today, I am proud that under this Prime Minister and this Government we make good on that pledge bringing into force the UK’s first autonomous human rights sanctions regime, which gives us the power to impose sanctions on those involved in the very worst of human rights abuses around the world.’

On the powers which can be used:

‘The Regulations will enable us to impose travel bans and asset freezes against those involved in serious human rights violations.’

On the UK’s message to perpetrators:

‘Today this Government and this House sends a very clear message on behalf of the British people: that those with blood on their hands, the thugs of despots, or the henchmen of dictators, won’t be free to Waltz into this country to buy up property on the Kings Road, or do their Christmas shopping in Knightsbridge, or frankly to siphon dirty money through British banks or financial institutions.’

On how the regime could be extended:

‘We are already considering how a corruption regime could be added to the armoury of legal weapons that we have.’

On how long sanctions could apply:

‘In practice, those people designated will be able to request that a Minister review the decision. They will be able to challenge the decision in court. And as a matter of due diligence, the Government will review all designations at least once every three years.’