Courtney Lawes trudged off exhausted having given body and soul to the cause but his 250th appearance for Northampton ended without the fitting fairy tale of a European revival.

Instead of marking the occasion with a win to keep their Heineken Champions Cup hopes alive, the Saints sank to a sixth successive continental defeat, to leave their campaign doomed.

Chris Boyd’s side can still reach the round of 16 but on Sunday they will be in the French capital to take on mighty Racing 92 — the Parisians who won 45-14 at Franklin’s Gardens last month, so the writing is on the wall.

This was a game Saints needed to win and they could not, despite the best efforts of Lawes and a few others — notably rookie centre Tom Litchfield, who fought valiantly throughout.

With England head coach Eddie Jones in attendance, Lawes won a turnover three minutes before half-time which led to a Dan Biggar try. The veteran flanker also won a vital turnover penalty on his own line after the break but he departed 15 minutes from the end.

At first, it looked as if he may have suffered an injury but that was a false alarm. ‘He was exhausted,’ said Phil Dowson, Saints’ forwards coach. ‘Courtney is experienced enough, old enough and 250 games ugly enough to tell us when he’s done. I’ve spoken to the medic and there’s nothing glaring.

‘We wanted to make it a special day and we failed on that front. Courtney is a big part of this club.’ 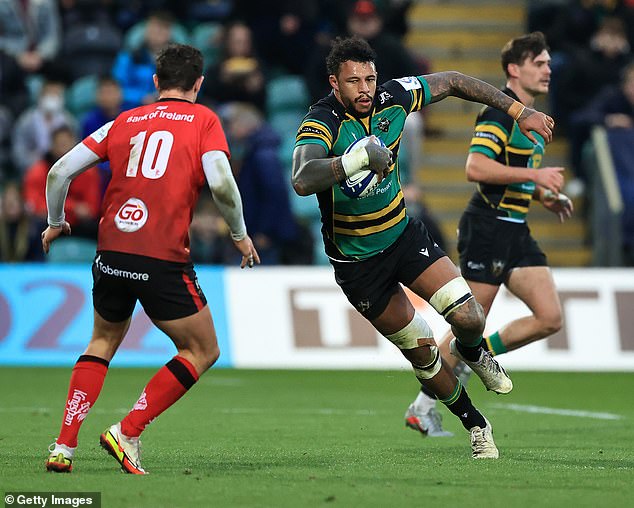 A late Rory Hutchinson try brought Northampton a losing bonus point but Dowson was realistic about their prospects of qualification, adding: ‘Never say never but it is a big ask.’

If he is not in the Ireland squad for the Six Nations, in the form he is in, then it will be a travesty. He scored two tries and illuminated the contest with his handling, footwork and kicking.

But Lowry was not the only visiting back to advance his Test cause, as wing Robert Baloucoune touched down clinically early on and was dominant in the air.