Up to 90 percent of the United States population could experience more than 90 degree Fahrenheit heat in the coming days as the country braces itself for the record-breaking heat wave to continue.

Most of the continental U.S. will be hit by 90-plus temperatures this Saturday, CNN reports, as records are smashed across the country and the Northeast prepares itself for the rising heat.

Northeastern states have so far avoided the worst of the staggering temperatures but the mercury will begin to creep upward from Thursday onward, rising into the low to mid-nineties by the weekend.

Temperatures in New York City and Boston will jump 15 to 20F from milder temperatures felt earlier in the week with humidity making it feel like 100 to 110F.

It will remain hot and humid until at least Tuesday with humidity keeping the heat index in triple digits on Sunday and Monday.

New York City, pictured, is set to feel the worst of a heat wave causing staggering temperatures across U.S. this weekend 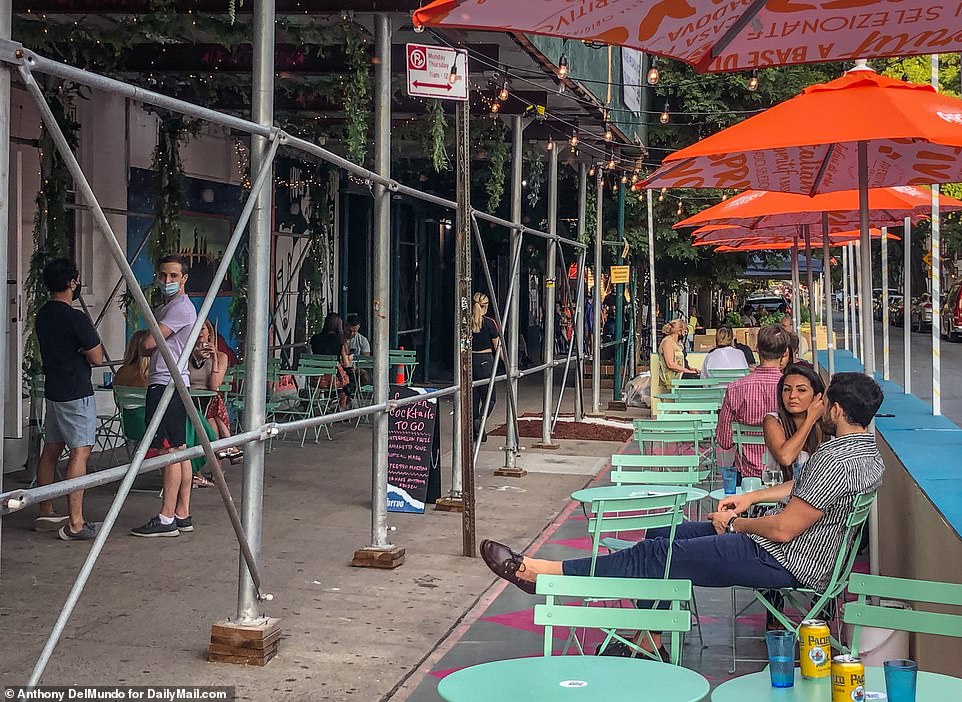 The northeast had so far avoided the worst of the blistering temperatures as other states are placed under a heat advisory but the heat wave is expected to bring a heat index of more than 100F to places like New York, pictured, by Sunday 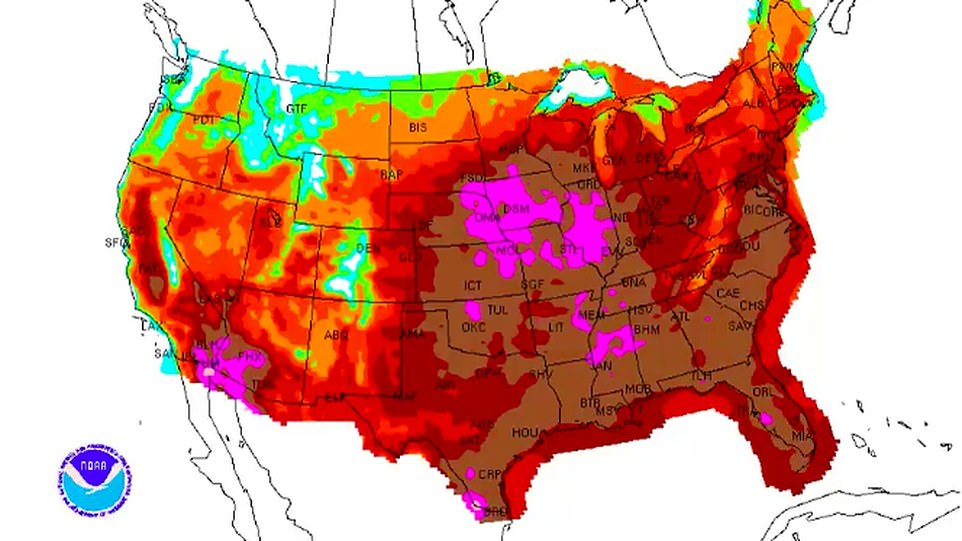 Up to 90 percent of the U.S. population could experience 90-plus degree temperatures this Saturday 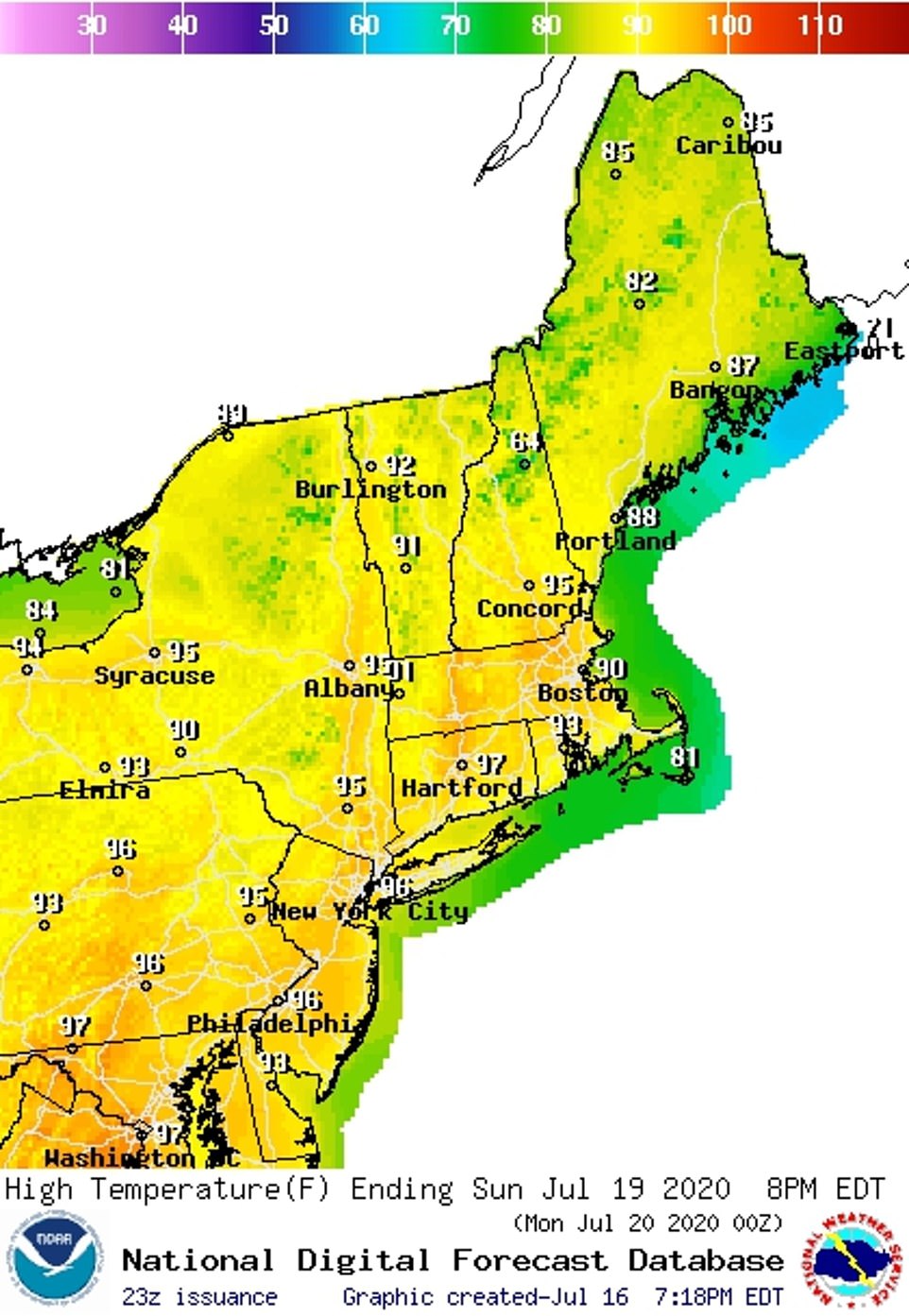 The weekend is expected to be sweltering in Philadelphia and in Washington D.C. which has already experienced almost a record number of days with temperatures of 90F or higher.

As of Wednesday, Dulles International Airport just outside of D.C. had recorded 20 consecutive days over 90F, falling just short of the 21-day record as temperatures dipped slightly Thursday.

The break will be short-lived, however, as the thermometer is expected to soar over 100F in the Capitol by early next week, continuing a prolonged period of scorching heat for the region.

The city still may reach a record for the most 90-degree days in any month.

According to CNN, Pittsburgh is also experiencing its longest 90-degree streak in 25 years.

The heat wave across the northeast is expected to continue until at least next Thursday when a cold front passes through.

Fox News reports that more than 45 percent of the country was already experiencing 90-plus temperatures by Thursday.

There have been more than 1,200 heat records and 159 July heat records broken in the past week, according to CNN, as the heat wave looks set to continue over the weekend and into the coming week.

More records are expected to be smashed as the thermometers continue to rise to all-time hottest levels in dozens of places.

‘Heat indices greater than 105F will be found across the Midwest Saturday and Sunday, before a cold front brings much needed relief,’ the National Weather Service reported Thursday.

‘Meanwhile, heat is expected to build across the Mid-Atlantic and South. 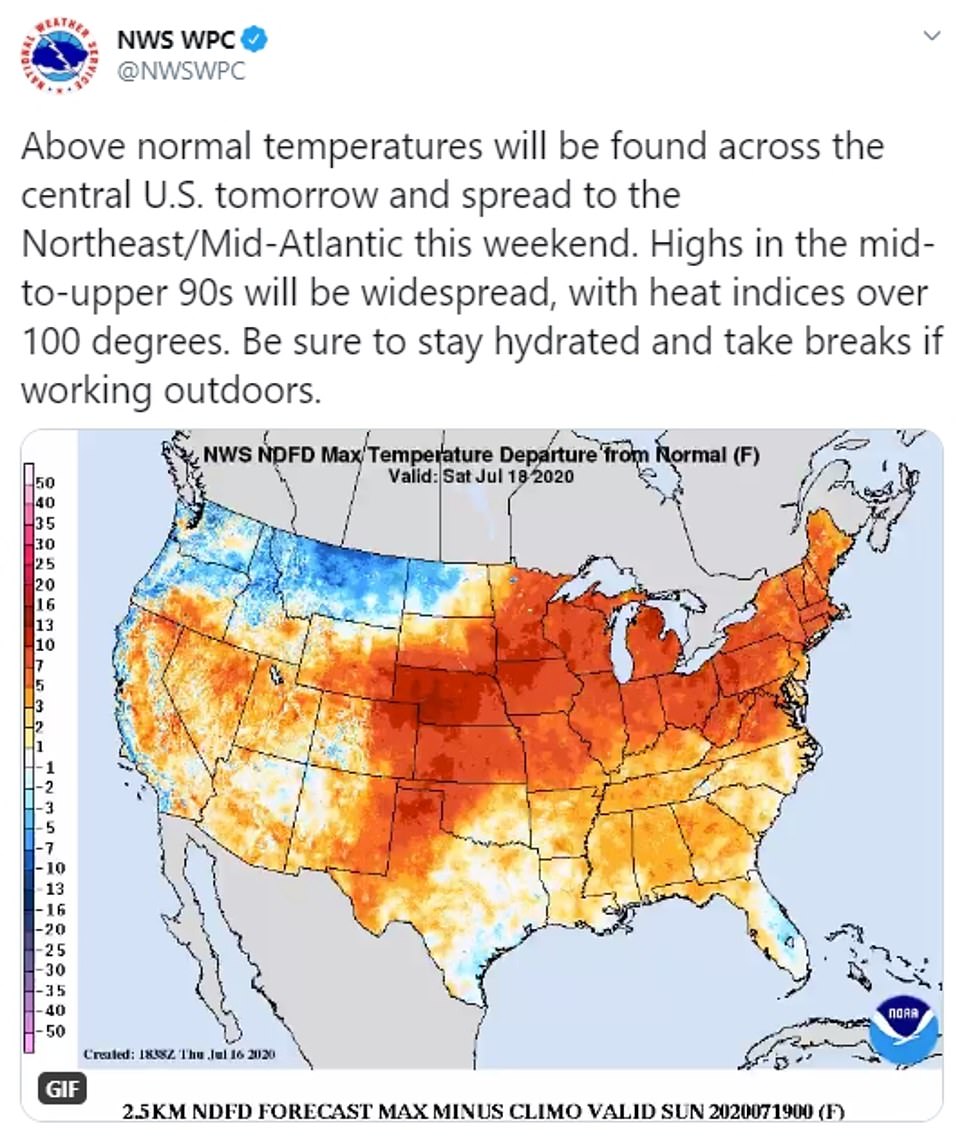 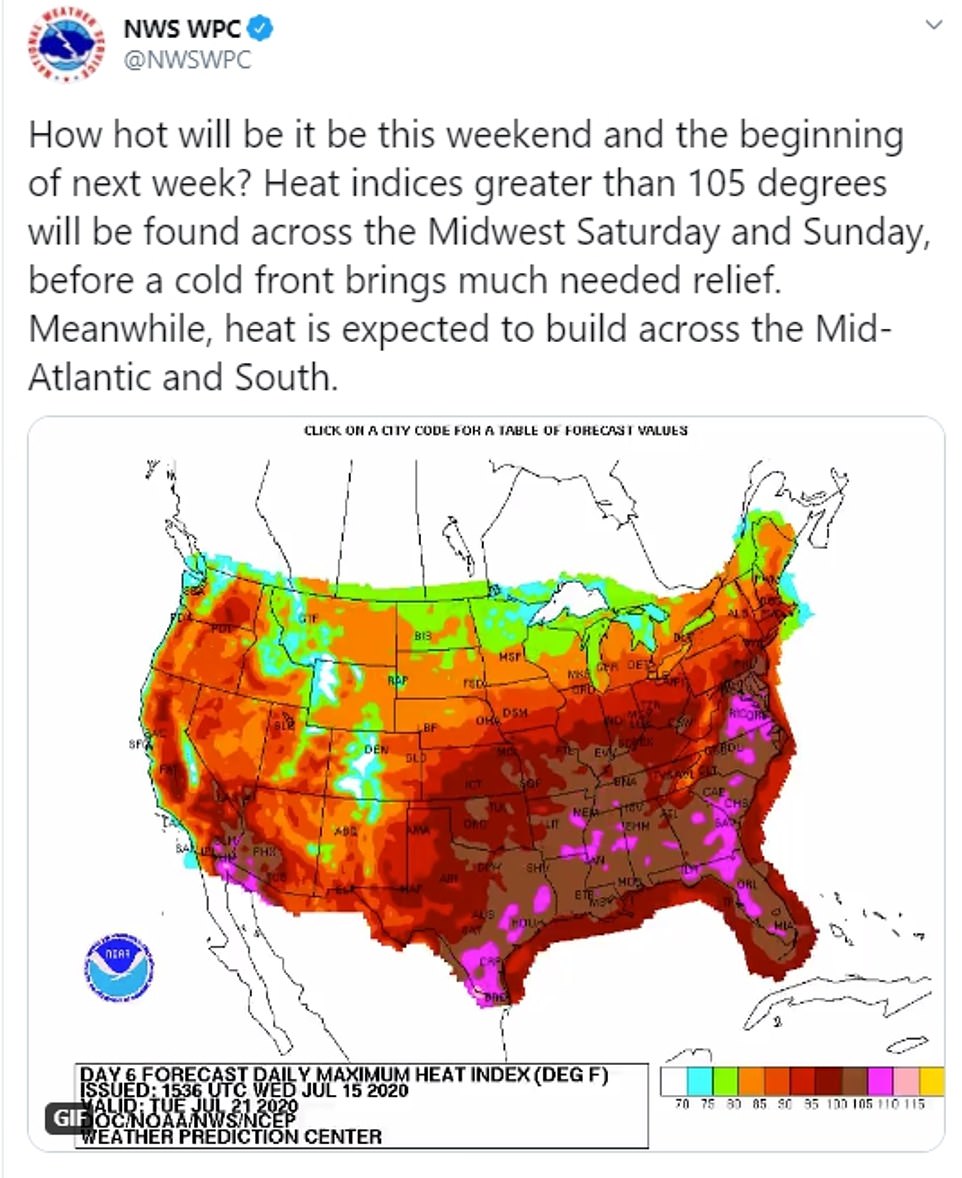 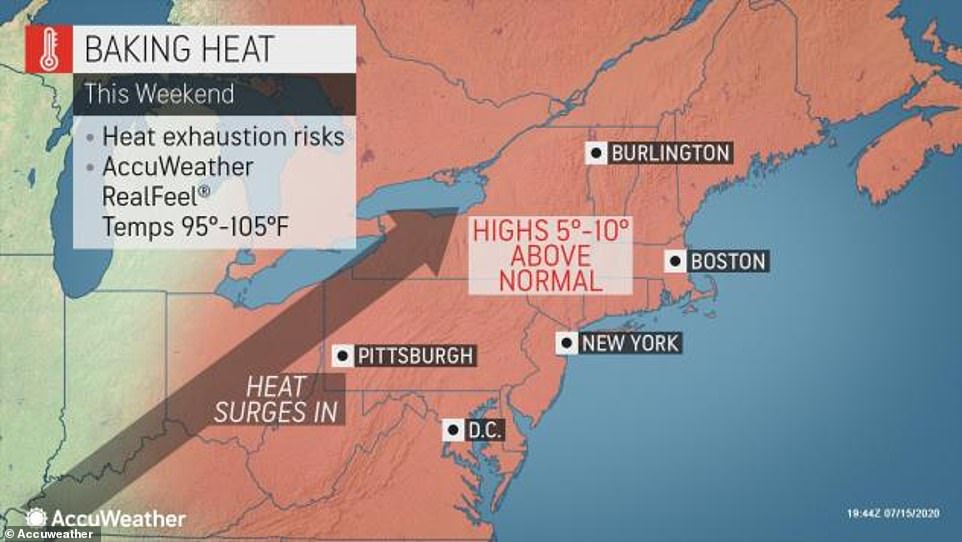 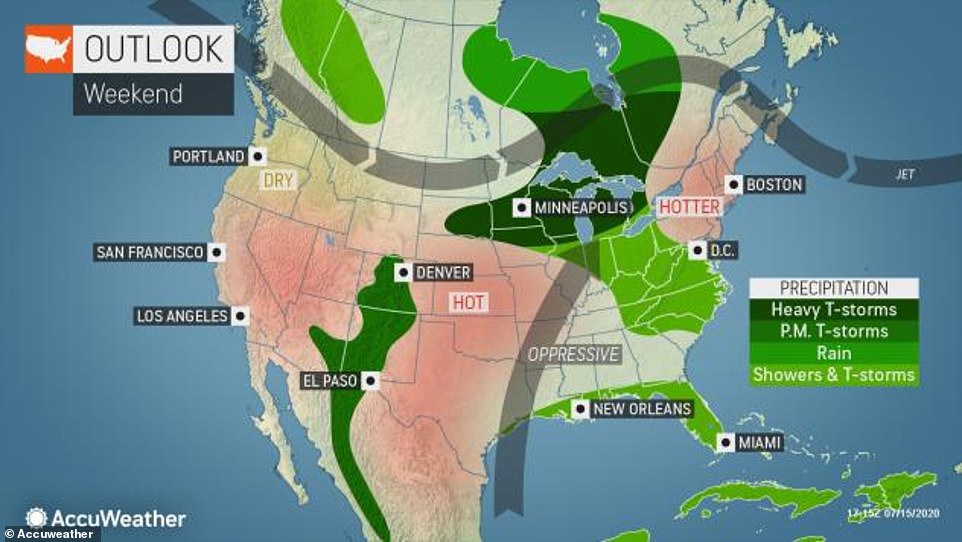 ‘Above normal temperatures will be found across the central U.S. tomorrow and spread to the Northeast/Mid-Atlantic this weekend,’ it added.

‘Highs in the mid-to-upper 90s will be widespread, with heat indices over 100F. Be sure to stay hydrated and take breaks if working outdoors.’

Temperatures in the south will fall slightly over the weekend as the heat moves further north but will still remain high.

Dallas is expected to hit the upper 90s while Oklahoma City might eclipse 100F on Friday, CNN reports.

The southwest will also experience a let-up in the temperatures but they will remain blisteringly high.

Phoenix had seen eleven straight days with high temperatures above 110F before the streak broke. They are now not expected to drop below 109F for a following five days.

In California, Palm Springs already set a daily temperature record of 121F last Sunday, the same day that Death Valley recorded the hottest temperature on the planet since 2017, when the barometer hit 128F. 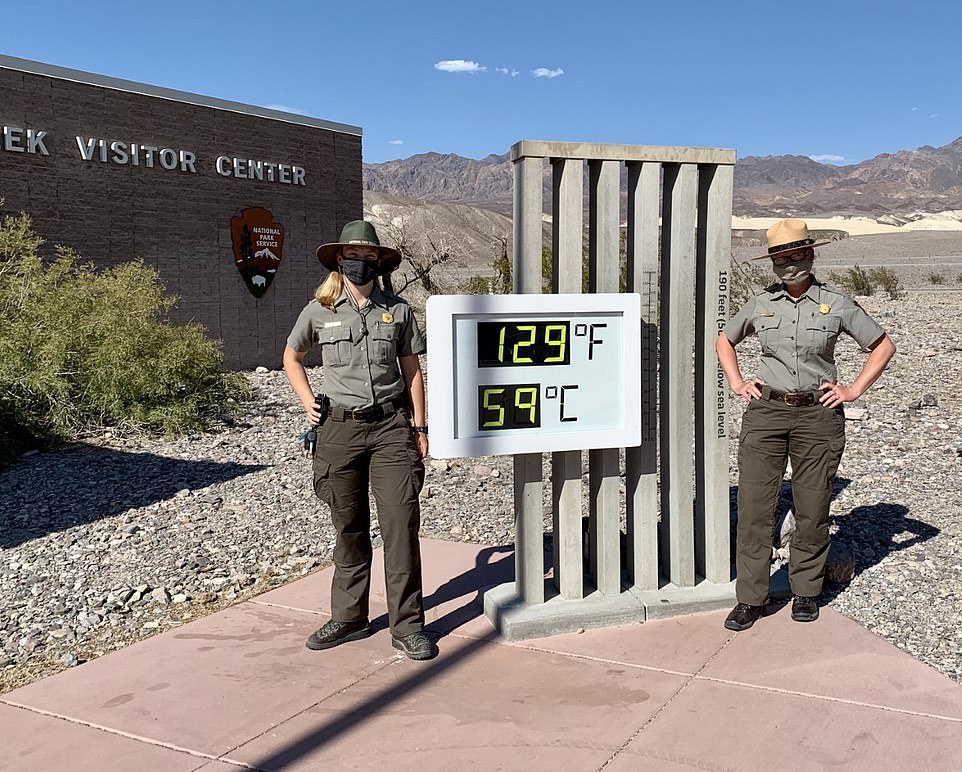 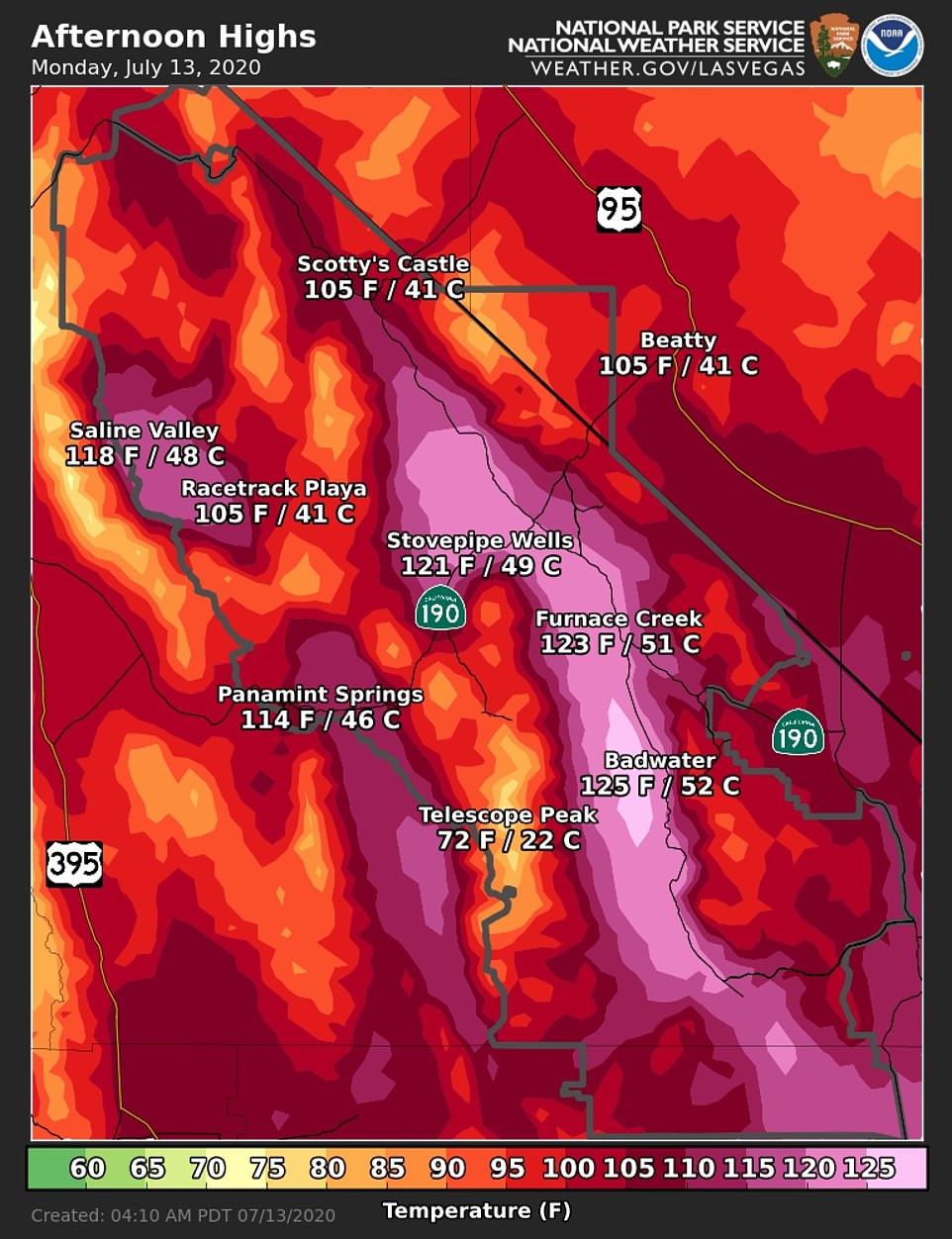 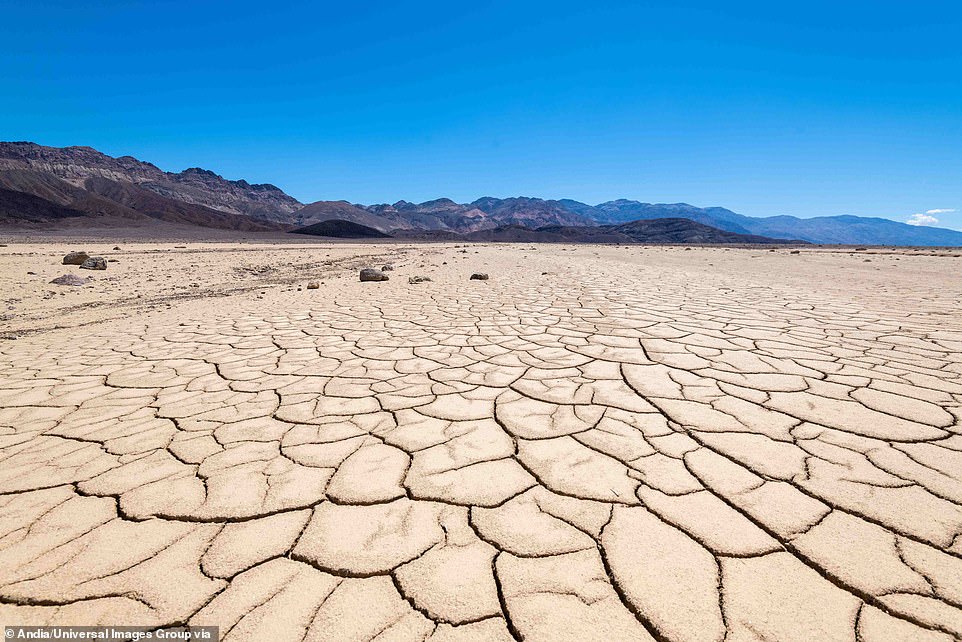 The Midwest is also to be hit by the increased heat with Chicago expected to reach the mid-90s Saturday, ten degrees higher than normal for the city.

Temperatures in Detroit will jump 20F into the lower 90s by Friday.

In St. Louis, the temperature is not expected to fall below 90F for the remainder of the month.

Seattle is expected to be one of the few places to avoid the weekend’s heat wave but the rest of the Northwest won’t be as lucky.

Yet, by Sunday and Monday, much of the northwest will also see temperatures reaching the mid-90s.

The sustained high temperatures has resulted in droughts in many parts of the U.S., the country’s drought monitor reported. 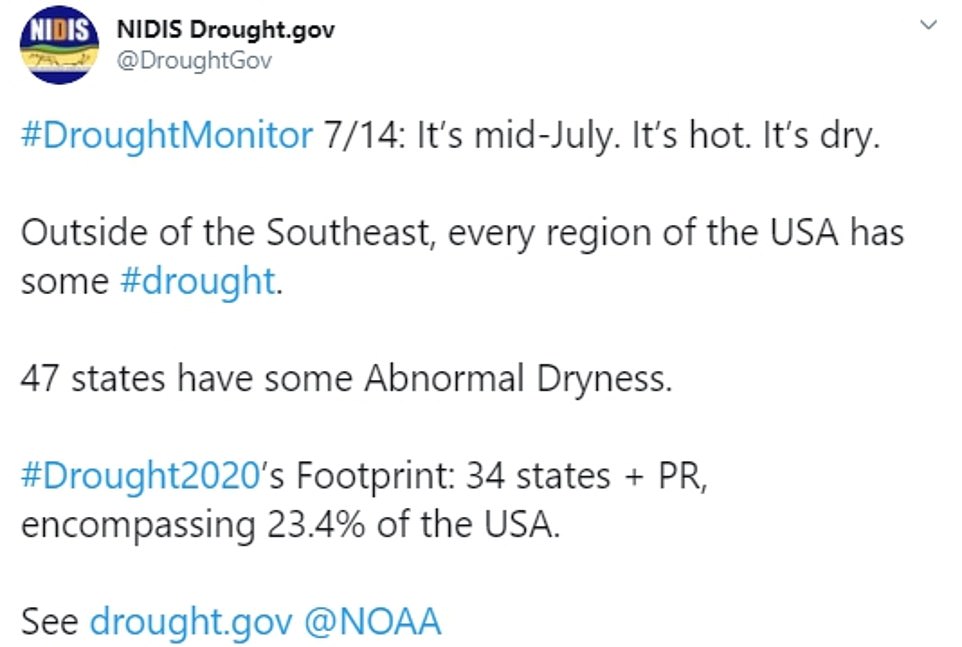 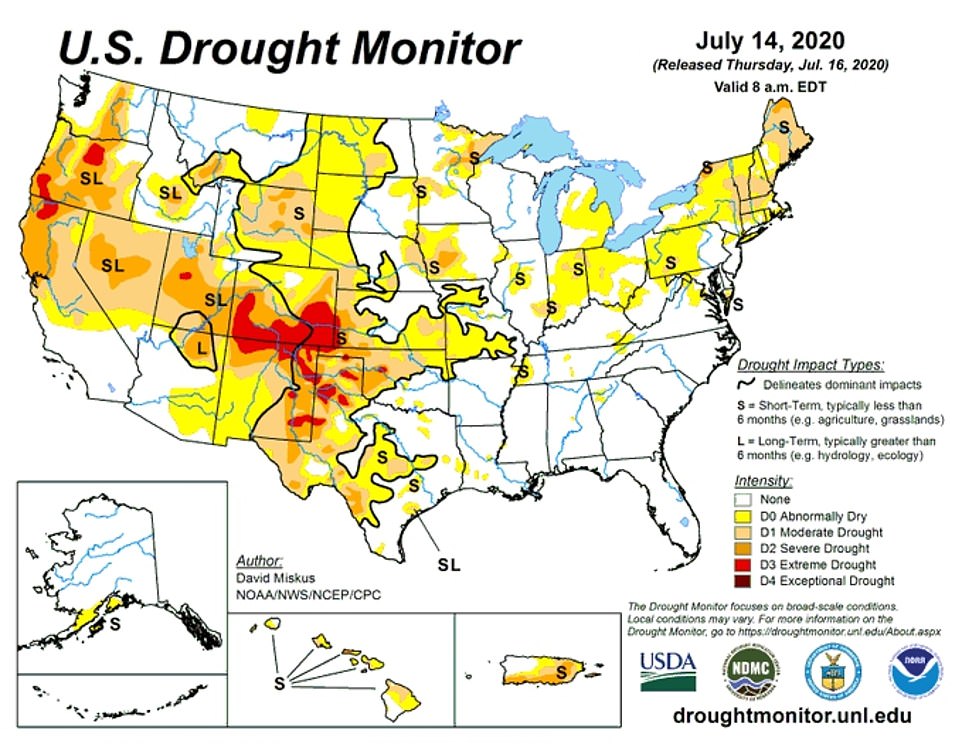 47 states have some Abnormal Dryness, the monitor states, as a result of the sustained heat across the country

‘Outside of the Southeast, every region of the USA has some drought,’ it said. ’47 states have some Abnormal Dryness.’

The heat comes after more than 60 damaging storm reports from Colorado to Florida, according to ABC News.

There were also four reported tornadoes in Illinois.

On Thursday, the cold front creating the storms is expected to travel east through the Great Lakes with the threat of further tornadoes and damaging winds from Ohio to western Pennsylvania and New York before the heat begins.