A fisherman has revealed his horrifying encounter with a ‘devil croc’ that was missing part of its top jaw because it had eaten half its face.

‘I pulled up under this big shady tree to eat lunch when this b****y big croc comes charging from about 100 metres away on the other side of the lagoon,’ he told Daily Mail Australia.

Mr Julius had been sitting in his five-metre long boat with his two friends – one of whom had been visiting from interstate.

A fisherman has revealed his horrifying encounter with a ‘devil croc’ that was missing part of its top jaw because it had eaten half its face (pictured, the crocodile’s large teeth on the bottom of its jaw grew so large it punctured its top jaw before part of it fell off)

‘It was very cold and we were the only boat on the water,’ Mr Julius said.

‘The croc came charging at us. I’ve never seen one move so fast. Its tail was thrashing in the water from side to side.’

The veteran fisherman admitted he had a crocodile wrapped on his boat, with its eyes looking straight ahead, and that the devilish beast could have mistaken it for a larger rival.

‘It was obviously something territorial. When it got closer and saw we weren’t moving it just went under,’ Mr Julius said.

‘Then 10 minutes later that’s when it surfaced again, but much closer.’

Mr Julius said that’s when he realised the crocodile was missing the top half of its jaw.

‘Its big teeth were sticking out. It was very intimidating and it kept eye balling us.

‘You could see its eyes. It raised its back out of the water as well. When they do that, that’s when they’re saying, “I’m tougher and bigger than you”.’

Mr Julius said that his friend – who has extensively worked with crocodiles – had explained to him the simple reason why the crocodile was missing part of its jaw.

‘Sometimes these crocodiles will puncture their top jaw with the two big dagger teeth on their bottom jaw.

‘The teeth will come though the top of the jaw and sometimes part of it will fall off. 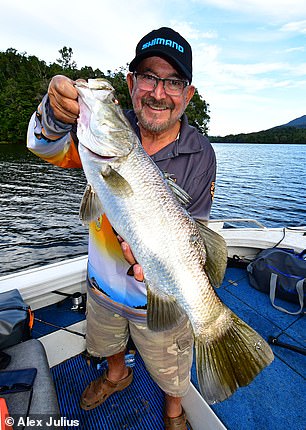 ‘That certainly gave it an evil look.’

An unafraid Mr Julius said it was not uncommon to see crocodiles and that he and his friends were far from frightened.

‘The general theory is that the reason why crocodiles don’t attack people in boats is because they see it as one big animal.

‘They also have a soft belly so if they jumped up and landed on the boat they would likely hemorrhage.’

The trio took their time to finish their lunch before they made off in the boat and left the monstrous crocodile alone.

On whether he would be game enough to return to Kakadu National Park, Mr Julius said it would be sooner rather than later.

‘Seeing that crocodile has probably encouraged me to go back.

‘It’s always good to see things like that in the wild. That’s a real experience.

‘He was very territorial and we were in his part of the world. If any of us had fallen into the water, he definitely would’ve charged at us and made a meal.’