Norway has lifted all lockdown restrictions with less than 24 hours notice, sparking rowdy celebrations, with mass brawls and revellers passing out in nightclub queues after 561 days of restrictions came to an end.

The Norwegian government abruptly announced on Friday it was going to lift the remaining social distancing requirements on Saturday at 4pm, meaning that nightclubs could open and restaurants and bars could fill to capacity.

‘It has been 561 days since we introduced the toughest measures in Norway in peacetime,’ Prime Minister Erna Solberg told a news conference. ‘Now the time has come to return to a normal daily life.’

The PM’s unexpected unlocking kicked off boozy celebrations the following afternoon which lasted late into Saturday night, with an impromptu rave in Stavanger, a mass brawl in Tønsberg and no less than 50 fights reported to police in Oslo.

Neither vaccination status nor a negative test result was required for any venue, leading to blockbusting queues outside nightclubs and restaurants packed with dinner reservations as people returned to their favourite hangouts in droves.

In Tønsberg, police were called after a group of around ten young men (pictured) started scrapping outside a nightclub near the pier. Fortunately nobody was seriously injured and the police arrested a 20-year-old man 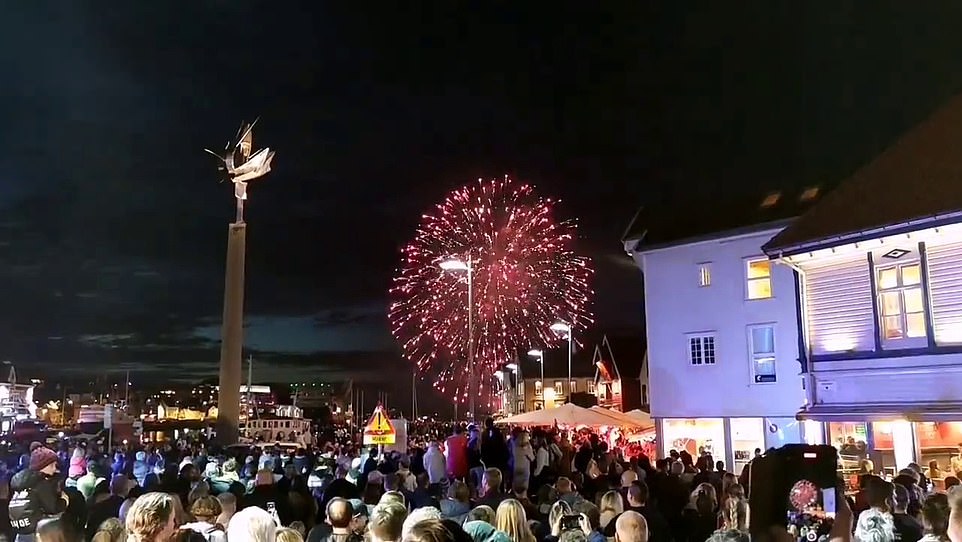 Fireworks during a street party in Stavanger on Saturday evening. Thousands of people across the country went out after the government announced an end to social distancing, meaning nightclubs could open and bars and restaurants could fill to capacity for the first time in more than 500 days 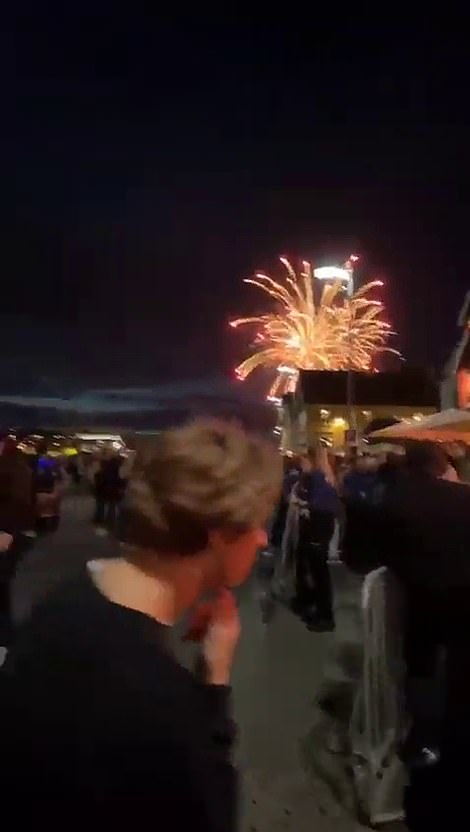 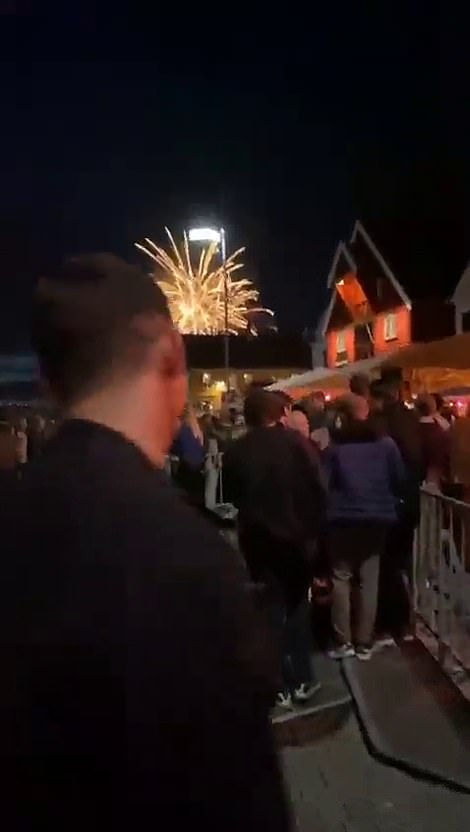 Fireworks in Stavanger, a city on the western coast, on Saturday night after the prime minister ended lockdown rules 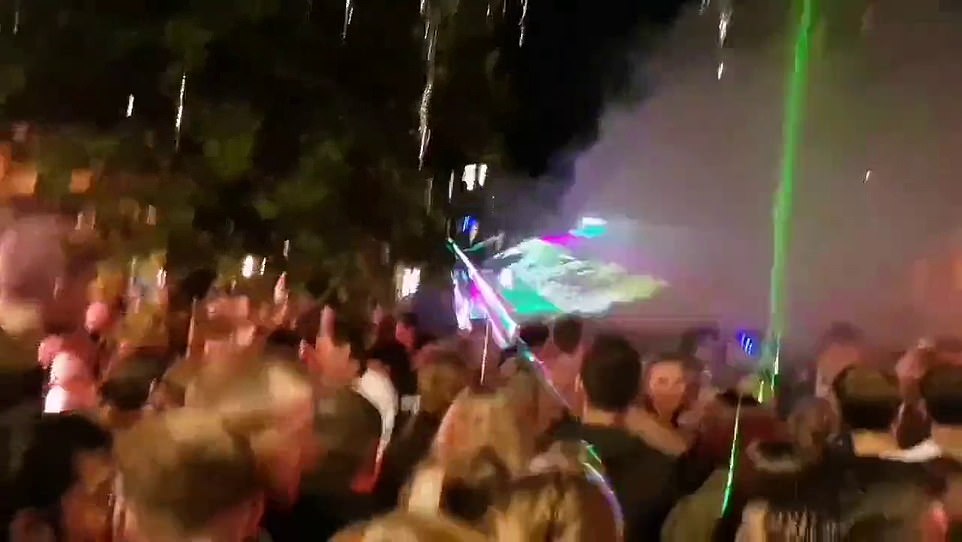 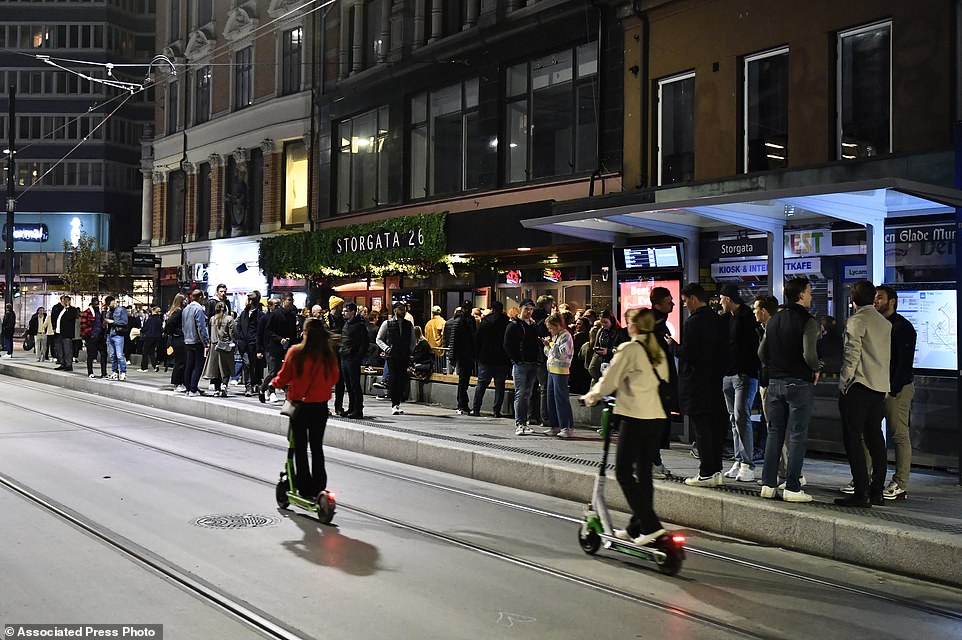 People out on the streets to celebrate the end of the COVID-19 restrictions, in Oslo, on Saturday. Police in Oslo received no less than 190 reports of disturbances, slightly less than they might expect to deal with on New Year’s Eve. 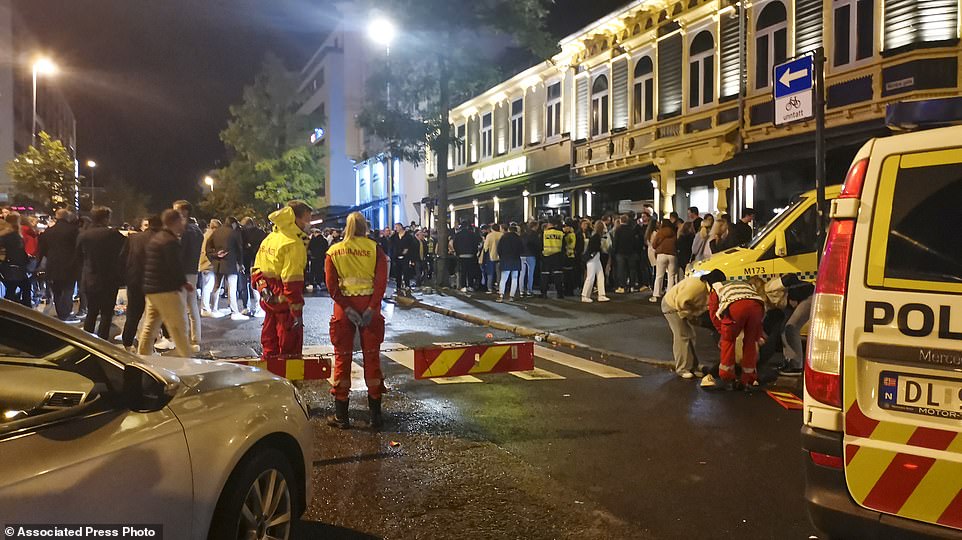 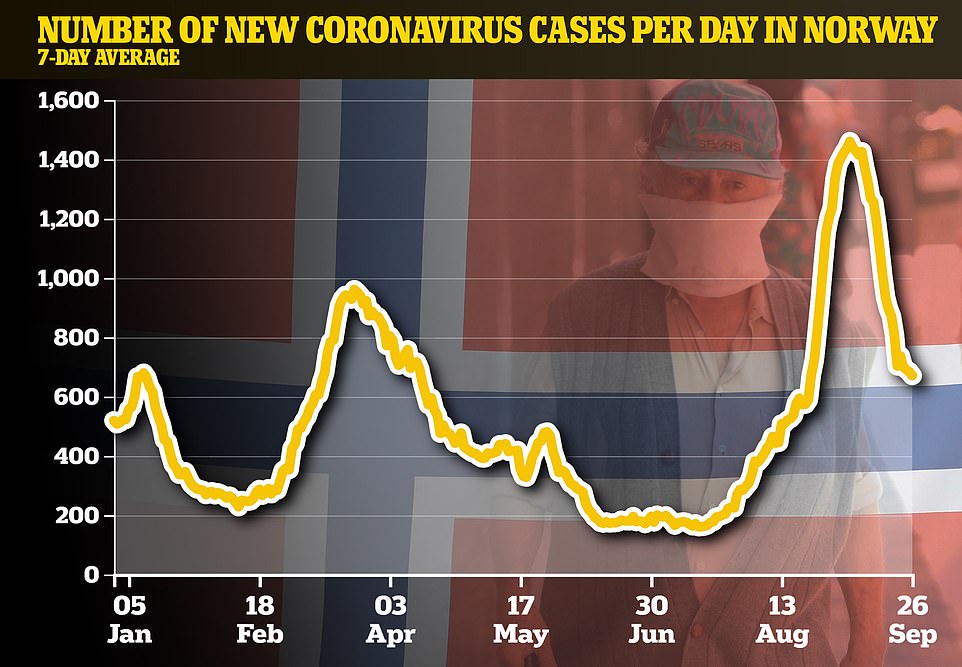 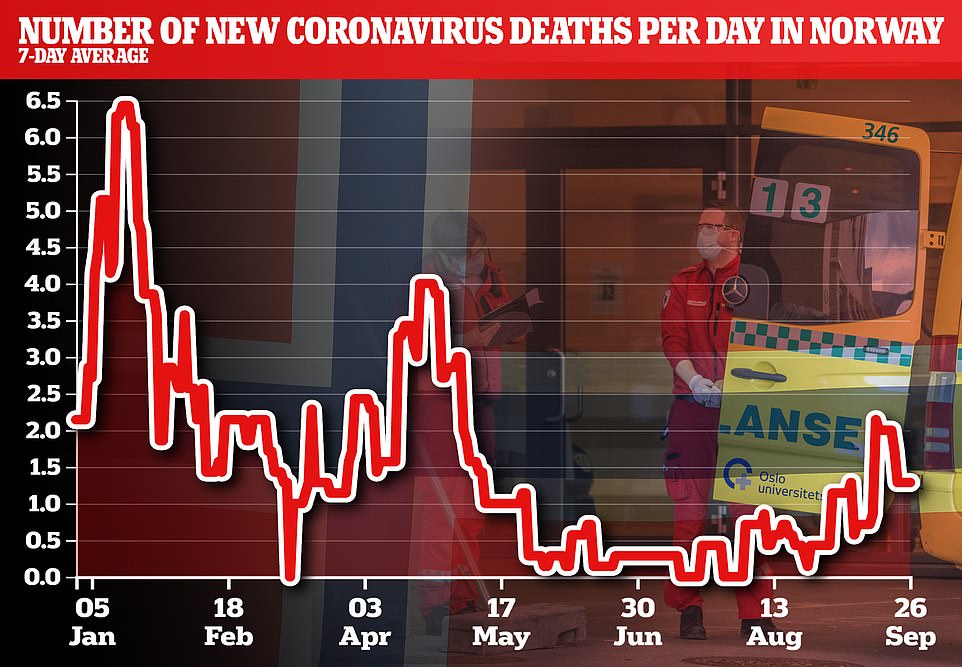 Queues for the clubs in Trondheim were so long that several people fainted while waiting to get inside.

Police in the city reported a generally good-natured atmosphere, with revellers singing the national anthem in the streets.

In Tønsberg, police were called after a group of around ten young men started scrapping outside a nightclub near the pier. Fortunately nobody was seriously injured and the police arrested a 20-year-old man.

The chaos on the streets provoked an angry response from some, including nightclub manager Johan Hoeeg Haanes in Oslo, who said the prime minister have given more warning.

‘That’s exactly what I predicted would happen,’ he told the VG newspaper. ‘It was a life-threatening situation in the city because they (government) didn’t give us at least a few days advance notice. This was a dangerous situation, as police said all places were packed.’

However, others were grateful to be getting back to business despite the challenges for staff.

‘It was a bit of an evening, but I’m very happy that we got to open. We are very happy with the evening in general,’ said general manager at Heidi’s Bier Bar in Oslo, Adrian Sneen.

‘It was a bit abrupt – more than a bit – but it went well. It’s just a matter of adapting and we expected that the whole of Norway would be out!’

Among other incidents, Norwegian media reported that police received an alert about a man carrying a machete on a bus in Oslo and people fainting while waiting to get into pubs in Trondheim.

‘There was a significantly greater workload than during the summer. There were a lot of people out already in the afternoon and it continued during the night,’ Oslo police spokesman Rune Hekkelstrand told the Norwegian public broadcaster NRK.

Police in Oslo received 190 reports of disturbances, slightly less than they would usually deal with on New Year’s Eve. 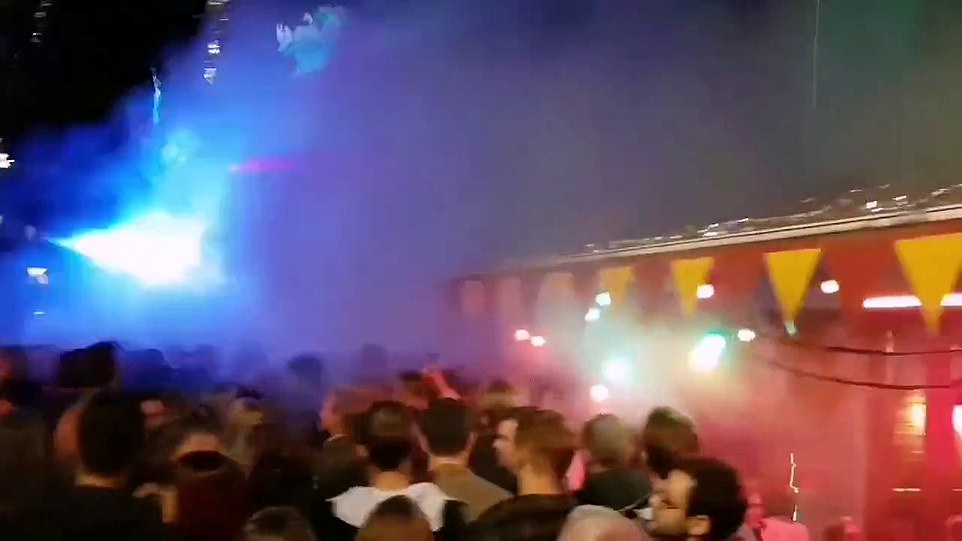 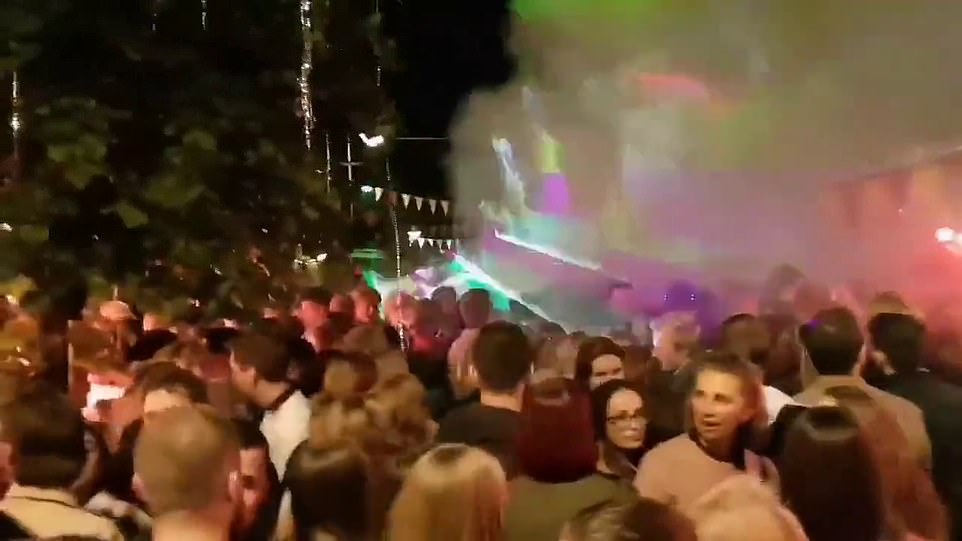 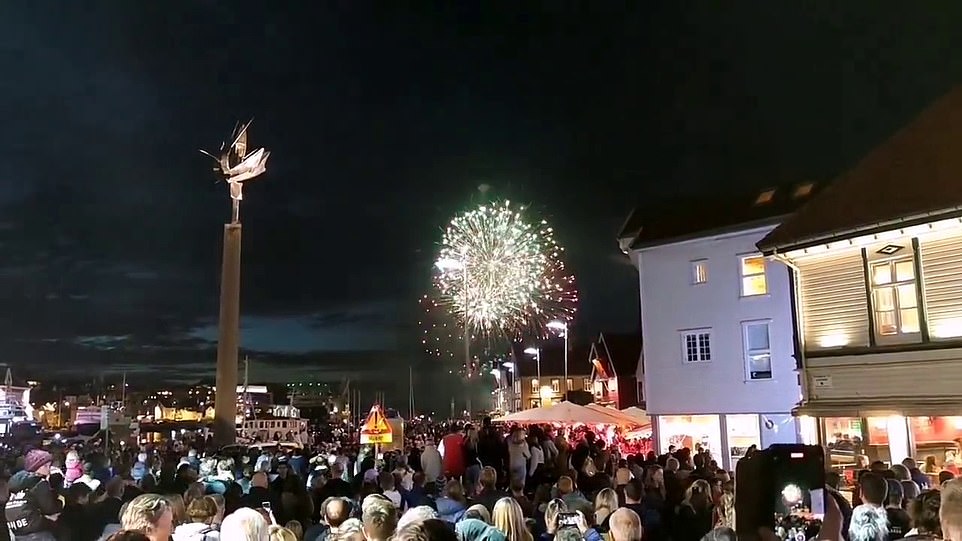 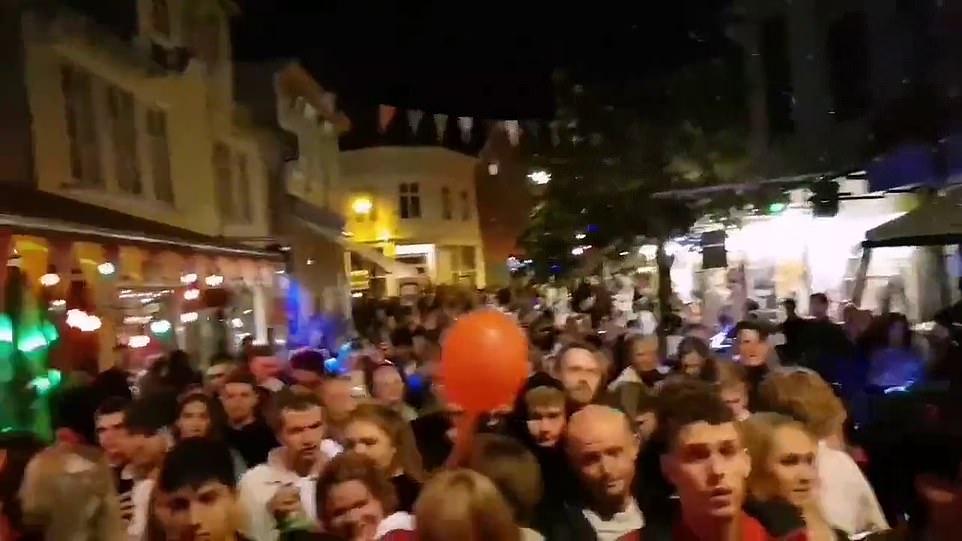 Ms Solberg responded to criticism of the sudden move to reopen society by saying that Norwegian health experts had supported the measure.

‘We shall not have strict (coronavirus) measures unless they are professionally justified. People must be allowed to live as they wish,’ she said late Saturday.

Norway is the second country in Nordic region to lift COVID-19 restrictions after Denmark did so on September 10.

More than 76 per cent of Norway’s population have received one vaccine dose, and nearly 70 per cent have had both shots, according to official figures.

PM Solberg said: ‘Even though everyday life is now back to normal for most people, the pandemic is not over. People will still get sick and therefore it is important that everyone gets vaccinated.’ 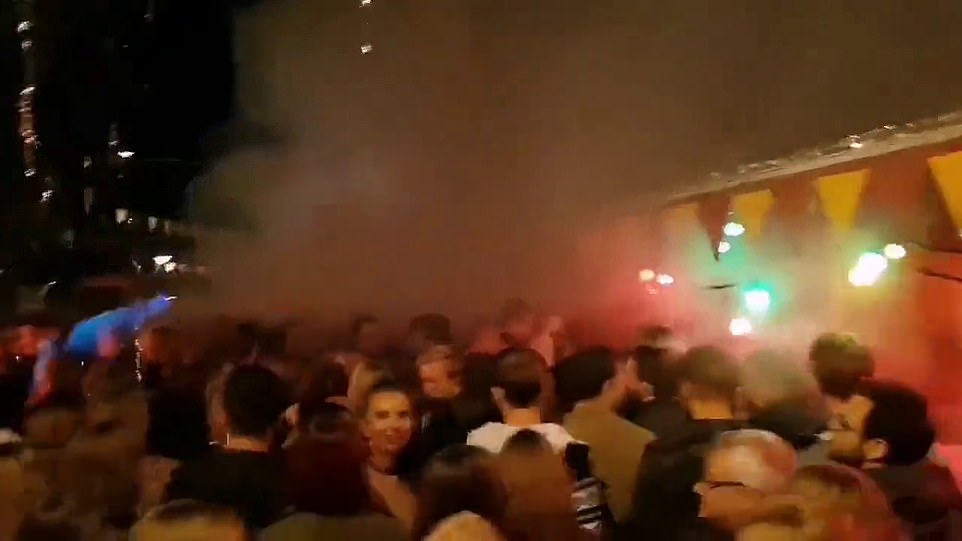 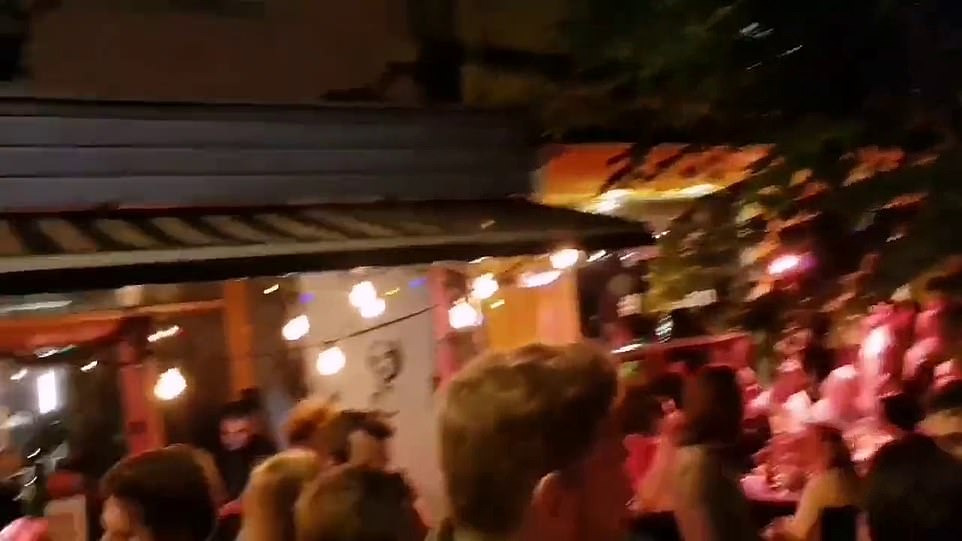 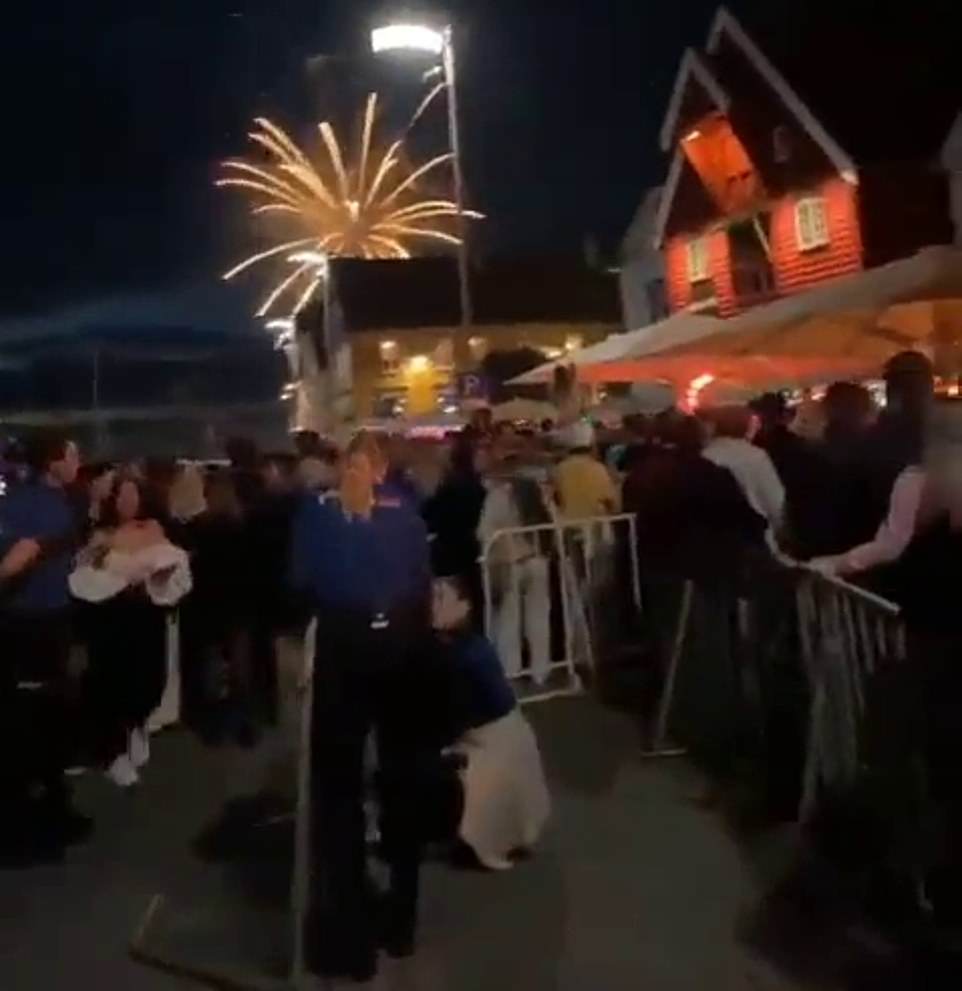 She warned, however, that those who do contract COVID-19 must still go into isolation to avoid spreading the virus.

Travel restrictions will also be relaxed, and the government will no longer advise against travelling outside of Europe.

Some restrictions will still apply to those arriving from countries considered to have a high rate of infections, the government said.

Solberg thanked the different government agencies involved in the response as well as the general public.

‘I want to say: Thank-you very much, Norway,’ she said.